Rhode Island is Where the Wild Things Are 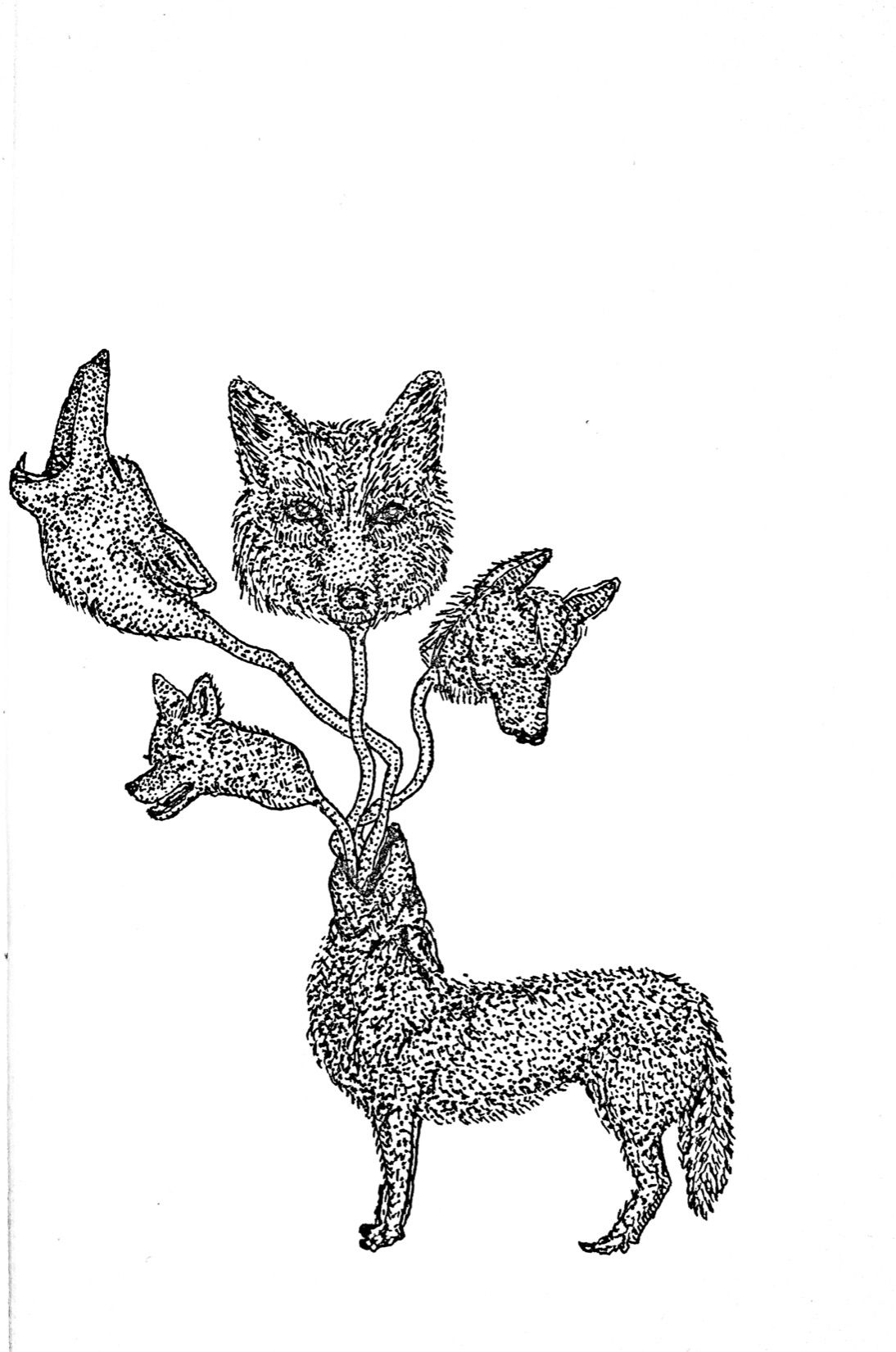 Before announcing its plans to close all its US locations, Shiru Café severely limited its free options. This fact has nothing to do with coyotes, but it has everything to do with how I first saw the newly painted ‘Greetings from Rhode Island’ mural facing the Thayer Street Blue State Coffee when I went to get my market-priced coffee there. The words are made of iconic Rhode Island mini-tableaus, like the Superman building and Newport Beach: the Cooler & Warmer state in all its visual glory. Sitting next to the words, as if confident that viewers consider it a Rhode Island state emblem, is a giant, triumphantly howling coyote.

One double take later, during which I began to wonder why the cheerful canine would be featured in any capacity as a symbol for Rhode Island, the mural’s painters made their organization known with a small line at the top directing curious Blue Staters to ‘coyotesmarts.org.’ Further research determined that the mural was painted by the Wheeler School in order to educate passersby.

Describing themselves as “a public information initiative,” CoyoteSmarts has convened to “address the growing presence of coyotes on Aquidneck and Conanicut Islands.” Its website answers some frequently asked questions about coyotes; the fact that, all this time, the presence of coyotes has been growing into what some consider an infestation was a question I didn’t even know to ask. Exploring the resources on their site gave just a hint of what I’d discover to be a truly dizzying world of wildlife coexistence culture.

The first thing I noticed scrolling through the site was the lingo that the Coyote Smarts founders use when describing good coyote safety protocol. Mid-latte, I learned how best to ‘haze’ a coyote, meaning frighten them away from pets with loud noises and frantic movement. The best way to make a coyote ‘scatter,’ according to this website, is to create one’s own ‘coyote shaker,’ which is a tin can filled with small rocks. I learned, too, how I might be contributing to the problem by leaving out ‘easy pickins,’ the term for easily accessible food scraps like open trash cans and outdoor dog food bowls.

Rhode Island coyotes had their 15 minutes of fame without me even noticing, however, with the whimsical story of Cliff the Coyote. Cliff was captured in 2016 near the Newport Cliff Walk. He became something of an unofficial tourist attraction in Newport, gaining notoriety for frequenting public areas and being comfortable around humans. He was featured in a video about urbanized coyotes distributed by the Narragansett Bay Coyote Study, a scientific survey funded in part by the Rhode Island Department of Fish and Wildlife. In the video, set to cheerful acoustic guitar, Cliff ambles along the road while the narrator describes how coyotes can lose their natural eating habits when fed by humans, and how “once habituated to people, fed coyotes are inevitably euthanized in the interest of public safety.” Cliff, however, became a minor viral “phenom,” as Brown puts it, garnering more than 40,000 national and international signatures on a petition to save his life. Allegedly, after a meeting with Mayor Jorge Elorza, the RIDFW decided to relocate Cliff to another part of New England.

All this new information absolutely delighted me, but I had hardly scratched the surface. I had not yet met the coywolf.

In 2018, PBS produced a documentary that introduced the New England public to the idea of a coywolf, and in local publications and broadcasting, it was the threat of the year. A Providence Journal article reports that Eastern coyotes are about 25-percent wolf, which is a good illustration of the controversy over whether coyotes are currently evolving. Multiple articles describe the problem of coywolves in Rhode Island as “increasing,” without explicitly saying how the coyotes are getting to be more like wolves. They hint at the idea that the animals might currently be breeding with wolves without making that claim, which has created a rift in the wolf-interested community, outright. Some in the community insist that the coyotes are getting wolfier by the year, among them professional pet tracker Jamie Genereux.

In an interview with Turn to 10, Genereux warned of cases he’d seen where “they come right out of the woods and grab the dog while the people are standing right there in the yard.” The animals he is referencing are classified as Eastern coyotes, the dominant species in Rhode Island, but are colloquially known as coywolves. He goes on to claim that “ten years ago, the only dogs getting eaten by coyotes would be 10 to 15 pounds,” but more recently, “we've had them kill a German shepherd, which is a big dog.” I called Genereux to understand the scope of the threat, and the picture he painted was bleak. He explained why Westerly now has signs warning beachgoers of coyotes, referencing a horrible story where a tourist from New York watched a coyote eat his dog. As a pet tracker, Genereux is called to relocate missing animals, and he has found that coyotes are often to blame. He is blunt about the danger, warning, “They can kill five in one night.” Genereux claims that the coyotes are breeding with wolves in Canada and travelling down to New England. He cites color as proof: “When I was a kid,” he says, “They were red. Now they’re all gray and black.”

The idea that coyotes are actively growing more wolflike, hunting in packs and taking down larger domestic animals, as Genereux described, is dark. Literally, their fur is growing darker. A wildlife biologist named Charles Brown also spoke on Turn to 10, however, and he described a drastically different scenario than the scourge of wolf-like coyotes I pictured.

Charles Brown, from the Rhode Island Department of Fish and Wildlife, says that coyotes first arrived in Rhode Island around 1965. They did in fact migrate from Canada, but over a period of several hundred years. When I asked him if it was possible for coyotes to still be breeding with wolves, he responded that the “interaction that occurred happened a century or more ago.” At present, Rhode Island coyotes are a quarter wolf on average, which makes them physically larger than West Coast coyotes, but there is no large-scale coyote-wolf breeding. Brown also noted that the color of the coyotes has remained the same for the past hundred years, coming in variants of “your basic tan-brown, to black, to pale, to a red, cinnamon color.” The coyotes’ recent behavior has been aggressive, perhaps increasingly so, but this is because of human food activity, not because they are generation by generation morphing into wolves.

After thoroughly disproving the threat of coywolves, Brown went on to describe the coyote world in further detail. The first thing he said was that his official job description is “overseeing furbearer related programs,” because, apparently the technical way of classifying coyotes is ‘furbearer.’ He further explained that coyotes are a public trust resource, meaning that, if coyotes are on someone’s private land, they can be shooed away or shot legally. This also explains why Rhode Island is obliged to observe their behavior.

He described a study currently being conducted by Dr. Numi Mitchell, who has studied coyote behavior on Aquidneck Island for 12 years. The RIDFW recently granted her funding to conduct a five-year expansion of that project to put expensive monitoring collars on a handful of coyotes and manipulate various food sources around Rhode Island to see how behavior is affected. I pulled up a picture of the collars being used while Charles Brown was talking and found that they are gigantic. Running around wearing the collars in Youtube videos, the coyotes look like they have giant fanny packs hanging limply from their necks, which I imagine must inhibit their behavior or, at the very least, make them less popular. Apparently, however, they are effective enough that Dr. Mitchell can accurately locate food hotspots to help communities alleviate the presence of coyotes in their neigborhoods.

While Brown is confident that humans and coyotes can coexist, he takes issue with efforts to artificially control the coyote population. Brown says that in the past, citizens have embarked on coyote crusades when they lose their pets. They ask the state to do a mass relocation, or culling, in which a service is hired to kill all the coyotes in an area. Brown feels that these people are misguided. Relocation is a challenge because other states don’t necessarily want to deal with the issue, and culling is difficult because coyotes are wily. As Brown poetically said, “There is a constant stream of transient coyotes floating around the landscape, forming a pair bond and having offspring,” which means around every corner there will be more, and any sudden vacuum will correct itself. Though it’s horrible to lose a beloved pet, Brown offers the reminder that according to the coyote, “It’s just another prey item, whether it’s got a collar on it or not.” Anyone who leaves food outside, or their dog out at night, or feeds animals behind their house, as Brown calls them, “feral cat fanciers,” are the real reason for coyote-human tension in the state.

The few days I spent in my Google spiral have felt akin to jumping into a painting. The minute I stepped through the coyote mural I was introduced to a whole new wildlife language and history, and everyone is coy here. As the coyote population in Rhode Island filled out during the past several decades, the mythology around them grew in tandem. It feels as though at several points within their history with Rhode Island, the spectre of the coyote has eclipsed the coyote itself. Misinformation and strong territoriality have pack humans acting as irresponsibly with their resources as the pack coyotes. Being careful with food scraps and giving coyotes the respect and distance they require is really all that Rhode Islanders need to do. There is something about the rumors and confusion that is as compelling as the furbearers themselves. If coyotes are a protected, valuable resource for the public, then mythologies about coyotes should be valued too, because it would appear you cannot have one without the other in coyote-riddled Rhode Island.

ROXANNE BARNES B’21 is a coywolf sun, easy pickins moon, and prey item rising. According to the ProJo, she’s also a quarter wolf.