The Fourth of July Girl 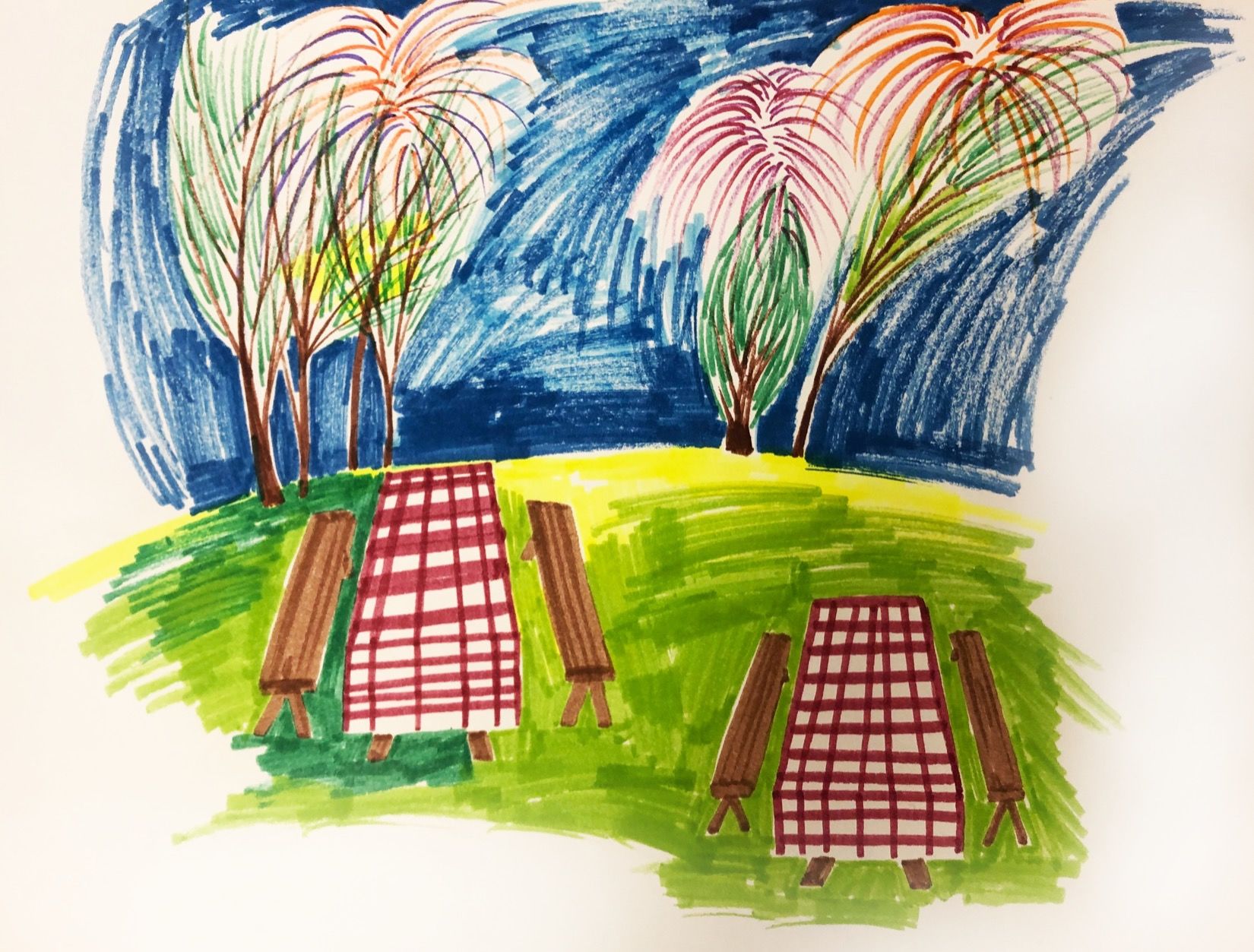 She emerges from the port-a-potty dripping wet. The blue plastic door swings a full one hundred and eighty degrees, shuddering the entire structure. The hinges shake; she takes off running at a furious clip, bare feet on the earth, applying pressure at the ball of the foot and springing—sudden and small—forward. The grass bends back and forth at her beckoning. The port-a-potty sits, still quivering slightly on its designated plot. She rushes through the field and droplets of water from her drenched bathing suit fly like marbles from her torso. Streaming, she is jeweled, imprecise, and watering the diamond of green.

He had been asked to identify his grandfather at the morgue a few weeks ago. His grandfather had had a heart attack and died at the supermarket in the toilet paper aisle. The man was 91 years old. His grandmother had died some time earlier, and his parents, both botanists, were conducting field research in the Mayan Biosphere Reserve in Guatemala, and couldn’t be reached. After a painstakingly awkward and slow elevator ride into the basement of the hospital, he was shown into a room. As he entered, his senses were overstimulated by fluorescence and immaculateness, the sterilizing agents in the air, but at the same time, underwhelmed: despite being saturated with death, the room was disappointingly bland. It had office ceiling tiles and a cup with pencils in the corner. He felt heavy and human, as if by breathing, he was adding too much carbon dioxide to the air. There, on the table, lay his grandfather, wearing blue boxer shorts and a yellowing white undershirt with his eyes shut and his tufted white hair less clean than usual. In life, he’d been a regular kook of the mannerly, affable sort, with hyper-expressive blue eyes, wildly unkempt white eyebrows, and a distinctive cackle that carried down city blocks. He nodded. Could he leave now? He turned to go and, faced with his grandfather’s wilting feet, saw that his toenails extended at least three quarters of an inch past each toe. They were sallow and had visible craquelure spidering outward, clumping in odd places like old grits, and as he made for the door, the nurse grabbed his sleeve, “It happens when you die! Your toes, they shri— ” but before the nurse had the opportunity to finish, he’d turned through the door and made it halfway down the hall. “Sir, you have to sign—!” the nurse called after him.

Now, the Fourth of July girl moves swiftly through pathways made by hanging skewers and tableclothed folding tables, short-haired waggers and chopsticked paper flags. They are creating a roaring and fuchsia buzz, and the kelly green grass, wet with dew and ocean humidity, is sodden and mud-stained in places. She crawls through darkening and moist palaces, red and white checked picnic blanket palaces where she can pretend she lives.

Two centenarian magnolia trees frame the going-in. A trickle of cars beep softly toward the water, corralled by the human edges of things. He anticipates well-meaning but inquisitive talk of his grandfather from his parents’ friends and decides he’ll tell the anecdote of the last time he saw Grizzly. He had gone over to his house to make spaghetti, but Grizzly, self-proclaimed pro-chopper, had cried so much over the onions—his Achilles’ heel, he said—that his vision became blurry. He sliced his finger, now just a chopper, releasing scarlet blood over the cutting board. And, without even batting an eye, he taped a bit of paper towel around the wound, announced that they were going out for pizza. The onions, now pink, sat on the counter.

She crawls between legs and because she is plastic-beaded, collects dirt in rings around her neck. She imagines the people as a ceremony of aliens, faceless from her angle, knees and denimmed legs busy keeping each other busy. The game is to slide a hotdog from the top of the table without being noticed underfoot and undertable. She pulls a string of beads over her head, swinging it upward, cascading a platter of hotdogs to the grass.

The woman in bright, wallpaper-printed kaftan is bragging about “the cousins,” as she calls them, and his listening is interrupted by explosions in the sky. She seems not to notice, talking and pausing with regular rhythm. She leans toward him as if about to spill juicy gossip from her bosom. “The youngest one was working on his college apps when he was at our house, so you know, he let me read one of his responses, and, oh, it was divine!” He’s stopped listening, really, watching the lightning bugs flash over her shoulder and wondering how long they live for and whether they die with their light on.

She notices that he keeps his toenails cut quite short, as short as she’s ever seen them, and they make his toes look disproportional and off, sort of stubby and weird. It looks like it might even hurt, having nails that short. Blades of grass stick up between his toes like hairs or carpet until the feet start walking and move away. She is doggedly following heels. Someone says, “Whose is this?”

A shirtless boy is saying to a girl with overenthusiastic gesturing, “Yeah, I want to be an activist to stand up—” and the sky erupts. The colors rain. She asks, “Do you know how I get home from here?”