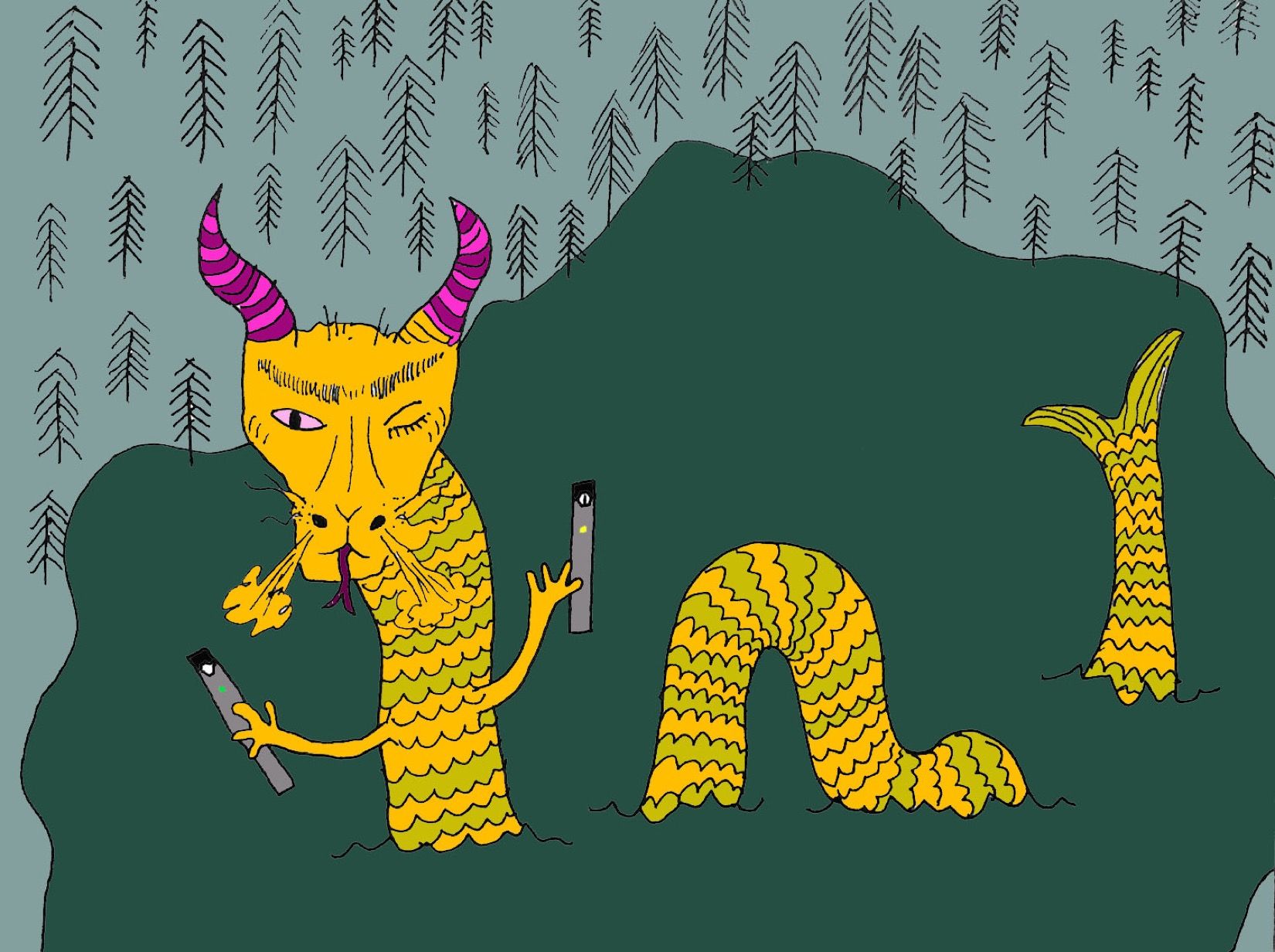 The emergence of damning new evidence demonstrating the danger of vaping and e-cigarettes feels like a weekly occurrence in 2019, as scientists issue ever more frequent warnings of “wet lung,” “popcorn lung,” and various other lung-related body horror Mad Libs. While this week’s government ban on flavored e-liquids may be the most widely discussed change of fortune for the vape lobby, Big Vape can now count among their enemies another, far more dangerous foe than the paper-pushing bureaucrats at the FDA: the Church of Jesus Christ of Latter-day Saints.

On August 15, in an article published in its youth outreach magazine New Era, the Church clarified its policy on substances deemed "addictive" and concretely declared that “vaping is clearly against the Word of Wisdom,” a broad category that equally forbids cigarettes, alcohol, coffee, and all other manner of habit-forming substances—foods included. While a cited study alleged that two-thirds of teen vapers believe themselves to be inhaling nothing but delicious mango flavor “mist,” New Era warns young Mormons that that’s “way, way far from the truth.” This news follows a general shift in the public’s attitude toward e-cigarettes, which have gone from futuristic anti-addiction devices to the child-targeting monsters haunting Melania Trump’s nightmares in a few short years. Though New Era’s statement is only a clarification, the fact that it was considered necessary at all reveals the degree to which vaping is becoming  a normalized part of American teenage life, and how regulators and officials fail to find the language to properly discuss—let alone solve—this public health issue. While the Independent is skeptical of the applicability of religious purity-based restrictions to FDA policymaking, it is clear that the current system’s reliance on the moral panics of concerned parents to propel itself into (often haphazard) action is a deeply unsuccessful model.

While the vape crisis seems to be keeping the FDA’s hands more than full, it is hardly the only target in New Era’s scope. As those in danger of straying from the Word of Wisdom are not limited to a handful of carefree teens sneakily passing around a Juul during a bathroom break, the article also used the opportunity to clarify the rules for the Latter-day Saint youth surrounding the forbidden “hot drinks”: coffee and tea. As with sweet, sugary, seemingly innocuous flavored vapes, young people should be aware that “the word coffee isn’t always in the name of coffee drinks.” The safest method, as tried and tested in other spheres of adolescent life, is, of course, abstinence, with the Church suggesting that one should “never buy drinks at coffee shops,” or if one must buy a drink, at the very least “always ask if there’s coffee in it.” Similarly, it has been declared that “drinks with names that include café or caffé, mocha, latte, espresso or anything ending in –ccino are coffee and against the Word of Wisdom.” The linguistics of tea are thankfully far less knotty and potentially misleading, but the Church stressed, lest a staple of American drink lead the faithful astray, that “iced tea is still tea.”

Lastly, the article in New Era touches upon the subject of “Marijuana, Opioids” (well known to be a singular category). While affirming their forbidden nature, the article unexpectedly leaves the door cracked open for medicinal use “under the care of a competent physician, and then used only as prescribed.” While seemingly contradictory to the unfamiliar observer, this is quite consistent with the Church’s policies on prescription drugs and their legitimate use. Given this background, the Word of Wisdom starts to appear significantly more coherent and common-sense in its approach to unhealthy and addictive substances than a good deal of the FDA, at least insofar as it seems to clearly center the questions of health and addiction. Though the clarity and consistency of the Word of Wisdom is to be appreciated, several questions remain unanswered: For one, the Indy would like to know what a Latter-day Saint youth is to do when prescribed (under the care of a competent physician) a strain of medicinal marijuana with a name like Coffee Haze, Caramel Kona Coffee Kush, or Cappuccino 420?

TO NESSIE WITH LOVE

A boy with weak eyes and a tuft of straw blond, muppetish hair skims a slim stone across the flat water of a Loch Ness inlet. The stone sputters to an unexpected halt where an object emerges from the water. The boy sees a slender, mesozoic marine reptile and, for the briefest moment of bittersweet intensity before the creature retreats back into the gray waters, the boy and the reptile lock eyes, knowing that they had shared something profound and intimate.

That boy may have been Boris Johnson (aka BoJo), the United Kingdom’s new prime minister, who currently has his imagination working overtime as he tries to conjure up belief in  both mythical Brexit deals and lake monsters. While visiting Scotland, BoJo was recently asked by journalists to comment on the matter of the Loch Ness monster. The fabled creature is commonly said to be some type of prehistoric reptilian holdover, the last lonely plesiosaur, but new research has emerged showing that no traces of reptilian DNA exist in the water. Indeed, only a high concentration of giant eel DNA could be found. BoJo, being the reputable empiricist that he is, responded with some insightful analysis saying, “A high concentration of giant eel DNA in the water, that does not seem to me to be conclusive proof of the non-existence of the Loch Ness Monster.” BoJo made it a point to let the journalists know that as a child he had longed to believe that the mythical creature was real, and that even now, he “yearns to believe” in the Loch Ness Monster.

While Johnson’s explanations of his nostalgia for the mythic creatures that informed his etiological development may have stirred up renewed hope in some like-minded folk, they emerge (unlike Nessie) in the murky midst of a rather concerning lack of progress on any type of Brexit deal. Bojo’s Brexit plans have recently hit some increasingly bumpy waters after outrage over his decision to suspend Parliament. As of right now, British lawmakers are set to come back together on October 14, just before Brexit’s October 31 deadline. While it might be apt to ask for extension during a slew of chaos, with giant eel DNA disproving childhood dreams and all, BoJo says that he would rather “die in a ditch” than ask for an extension for Brexit.

There’s a certain method of mythos surrounding BoJo’s belief in Parliament, Brexit, and lake monsters. By law, BoJo would be compelled to ask for an extension if no deal is reached. However, much like he believes in mythical creatures, he also seems to believe that his singular power of will can overcome the laws of the state. There’s a certain formula here that posits if one had just enough belief in themselves, they could make whatever they want come true. A No-Deal Brexit would happen without consequence, BoJo might befriend a couple members of Parliament, and the ole Nessie of BoJo’s dreams would be alive and well. “Why don’t we? Why don’t we?” BoJo pines. “There is so much more we can do,” he told the Sunday Times. “What grieves me about the current approach to Brexit is that we are just in danger of not believing in ourselves, not believing in Britain.”  The issue, it might seem then, is that no one believes quite like BoJo does.

While the existence of the Britain that BoJo believes in probably won’t be disproven by giant eel DNA, the Prime Minister might want to rely on more than just belief to fish out a Brexit deal.