The Need For Speed

5G and the next chapter of the digital divide 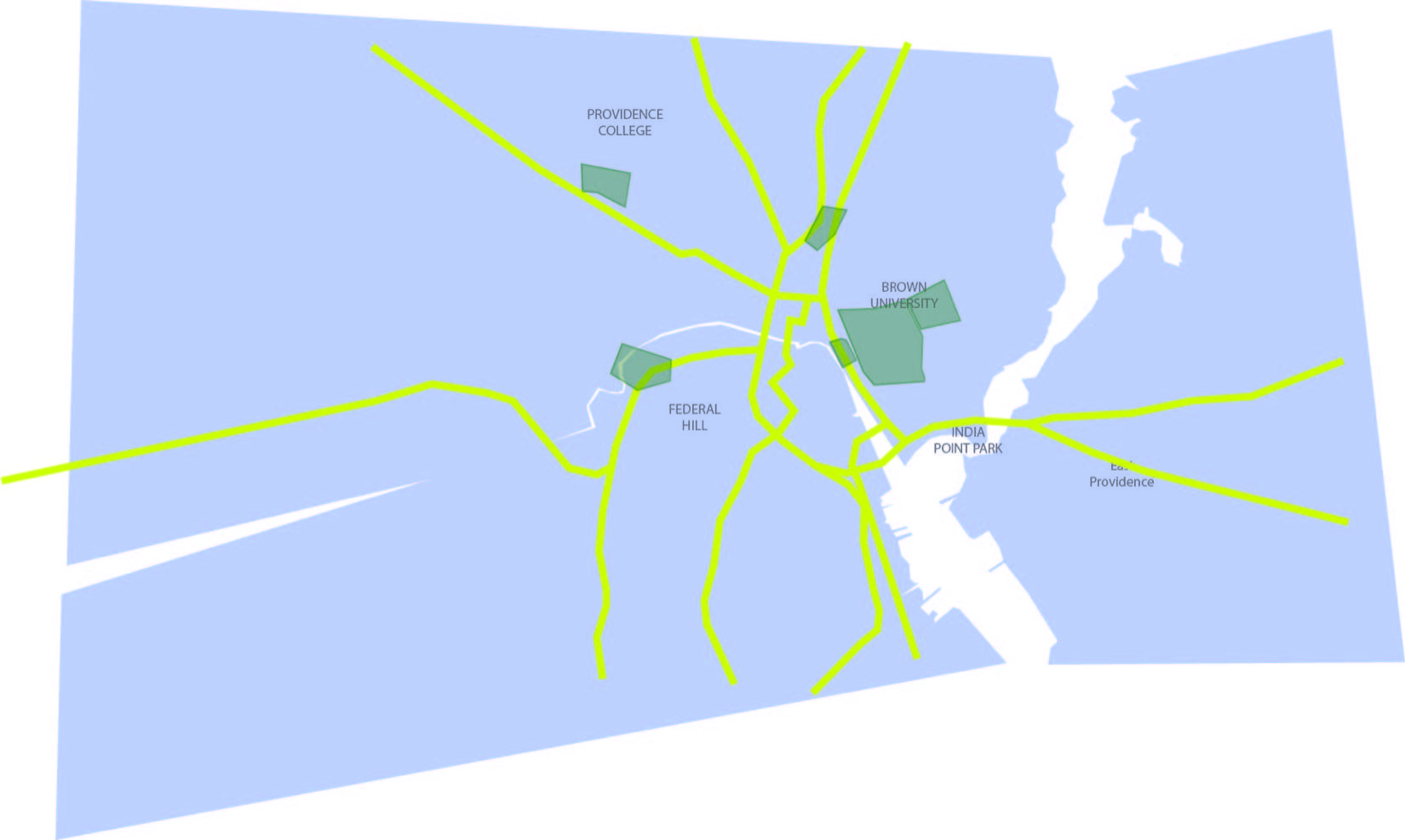 Scattered around the streets of Providence, clusters of gray boxes sit perched atop telephone poles and attached to the sides of buildings. They are antennas, and they form the basis for the next generation of wireless technology, known as 5G. Providence is one of several pilot cities across the U.S. that have been selected by Verizon as testing grounds for this new kind of wireless technology. Small sections of neighborhoods around the city have been installed with a network of 5G antennas. The connected areas include parts of Federal Hill, Mount Hope, College Hill, and Elmhurst.

Although Verizon hasn’t provided official reasoning for how its pilot cities were chosen, the choices reflect its priorities in developing this new infrastructure. The selected cities are relatively wealthy, with large populations of residents who already use high-end smartphones. The coverage areas chosen within cities are also revealing. They are usually neighborhoods with high density and wealthy populations: downtown business districts, college campuses, and upscale neighborhoods. The places that Verizon has chosen to install 5G are those that are already some of the most connected. To better understand the stakes of how this next-generation network is implemented, it is helpful to look back at the history of cellular networks.

Generations of wireless cellular technology are defined by their incompatibility with older devices. Usually, incompatibility results from changes in hardware, software or both. In each generational change, new kinds of transmitters allow more information to flow across a broader range of frequencies. At the same time, new kinds of encoding can compress large batches of data more efficiently. Devices need to share the same basic hardware and software with the surrounding network in order to communicate, so changes tend to happen relatively suddenly as both phones and networks change over, leading to discrete generations.

In 1979, the first generation—1G—was the first set of consumer wireless cellular telephones. In the 1980s, the second generation introduced text messaging and greater bandwidth for calls. The advent of the third generation in 2001 improved data transfer speeds enough to allow mobile phones access to the internet. 4G, introduced in the mid-2000s, improved data speeds once again, allowing for video calls and other high-bandwidth applications that have become the heart of modern mobile phone use.

5G offers yet another increase in bandwidth and speed. Current 5G networks produce peak speeds more than ten times faster than the best 4G networks. The transfer speeds of 4G, measured in megabits-per-second, will be superceded by 5G’s gigabits.

But the speed upgrade that 5G offers comes with added infrastructure requirements. 5G networks rely on higher frequencies than previous technology. This allows networks to carry more information. However, higher frequency waves are more sensitive to the material they pass through. The atmosphere absorbs higher frequency waves more quickly than low frequency waves, so 5G signals do not travel as far as 4G ones. And obstructions like buildings and trees, which have little effect on 4G cell service, can block 5G signals. So while a single 4G transmitter can cover several miles, a 5G tower might only transmit within a few hundred feet and require line-of-sight to devices.

The infrastructure for 5G networks is being deployed with this constraint in mind. Today, transmitters placed on telephone poles and lampposts every few blocks only give spotty coverage, but a fully realized network might see antennas placed every few dozen feet, providing uninterrupted high speed connection everywhere. Although 5G transmitters are smaller and less expensive than their 4G counterparts, covering any significant area with a full 5G network would require an enormous investment in new infrastructure. Because of this, 5G networks will likely only be deployed in high density urban centers, where many users can share the same system. But rural and tribal communities already lag behind in rates of access to the internet. Deploying 5G to only dense urban areas threatens to contribute to a widening gap in internet access.

Although the internet is part of daily life for millions, many Americans living in rural or tribal areas lack access to adequate connections. In areas with slow or no internet access, residents cannot take advantage of the employment opportunities, educational resources, and health information on the web. Access to the internet empowers people and communities by connecting them directly to resources and information that improve their lives.

While internet access is a boon for education and a requisite for participation in much of the modern economy, it has not always been distributed equally. Urban centers tend to have much higher rates of internet access than rural areas. This difference is often called the “digital divide.” The Telecommunications Act of 1996 gave the Federal Communications Commission (FCC) broad powers to monitor the deployment of new phone and internet services along with a mandate to correct any inequities that they might find. The Act also requires the FCC to document their findings and progress each year in a Broadband Deployment Report. From the very first of these reports in 1999, the FCC found that rural, low-income, and tribal communities were at risk of being ignored by internet service providers. The findings held true over the following years.

In 2012, the FCC reported that, while only 10.2% of all Americans lacked access to high speed wireless internet—with the benchmark then set at 5 megabits-per-second download speed—more than 27% of rural residents and 30% of residents of tribal land lacked access. As overall connectivity has increased, rural and tribal areas have become more connected: in 2016, the FCC found that only 0.4% of all Americans, 1.8% of rural residents, and 5.1% of residents of tribal lands lacked access to 5 megabits-per-second download. However, between 2012 and 2016, faster 4G LTE supplanted 3G as the widespread standard of mobile wireless, and the 5 megabit benchmark became outdated. When considering a more representative standard of 10 megabits-per-second, the nationwide population lacking adequate internet access dropped to 12.7% from 19.9% over the same time period. However, for rural populations, the proportion stayed constant around 30%, and for the population living on tribal lands the proportion actually rose slightly to 36.3% from 35.5%. As wireless technology has improved, the digital divide has often grown larger, not smaller.

The economics of scale are at the root of the digital divide. Because installing fixed internet connections requires running wires to each connected house, it is less expensive per-user to install wired internet in densely populated urban areas as opposed to sparsely populated rural areas. This has given internet service providers, which construct and own most of the internet infrastructure in the United States, strong incentives to avoid servicing rural areas.

Some rural and tribal communities have taken the issue of internet access into their own hands. Internet cooperatives, which are owned and operated locally, provide service to many areas that larger internet service providers do not. But in areas that are not serviced by either, residents are left to rely on slower services like dial-up and mobile broadband.

Some internet service providers have claimed that a fully developed 5G network could replace traditional wired service and help bridge the digital divide. In a public conference call earlier this year, AT&T CEO Randall Stevenson claimed that 5G could become a “fixed broadband replacement product.” Statements like this have been met with intense scrutiny by digital rights advocacy groups like the Electronic Frontier Foundation, which have argued that even the most advanced wireless broadband pale in comparison to high-speed wired connections in terms of speed, price, and long-term infrastructure maintainability. While 5G networks are fast, they are simply not as fast as wired options like fiber optic, and are often significantly more expensive for consumers. The development of 5G networks is unlikely to close the digital divide by replacing wired internet connections. More than that, because of constraints on where it can be deployed, 5G may exacerbate inequalities in wireless broadband access.

Because 5G towers have limited transmission range when compared with 4G, it’s unlikely that their use will expand to sparsely populated areas. 5G will likely remain limited to urban centers and other areas that already have higher quality internet connections. 5G deployment threatens to widen the digital divide by improving the access of those who already have it while not helping those without.

In the long term, 5G’s biggest potential for affecting the digital divide may lie in its ability to change expectations of what constitutes a high-speed connection. As more users gain gigabit-per-second 5G connections, services will emerge that require those connections. Many widely used smartphone applications require 4G levels of high speed internet connection, and were only made possible by the widespread adoption and implementation of 4G networks. Video-calling and high definition streaming would not be possible without the infrastructure required to support high-speed wireless internet. Although services that require a 5G connection do not yet exist, they are surely coming. And once they are here, consumers are unlikely to go back to using 4G-based services, just as internet users today would be left unsatisfied by low resolution videos or web pages that take minutes to load. Unless efforts are taken to continue to expand new internet technology to all users as standards of speed and access change, rural and tribal communities will be left even further behind than they are now.

For now, in Providence and other cities, the introduction of 5G networks means faster connections for a select few. If you have one of the newest phones and live or work in certain areas, you might notice that web pages load nearly instantly and apps download in seconds. But most people across the state and across the country will not experience the benefits of 5G anytime soon. As long as the networks remain restricted to certain areas within a few cities, the digital divide threatens to grow. Without a substantial change to the way wireless networks are distributed across the country, the newest technology could be a leap forward that leaves many Americans behind.

MATT ISHIMARU B'20 has no service.