Week in the Sky 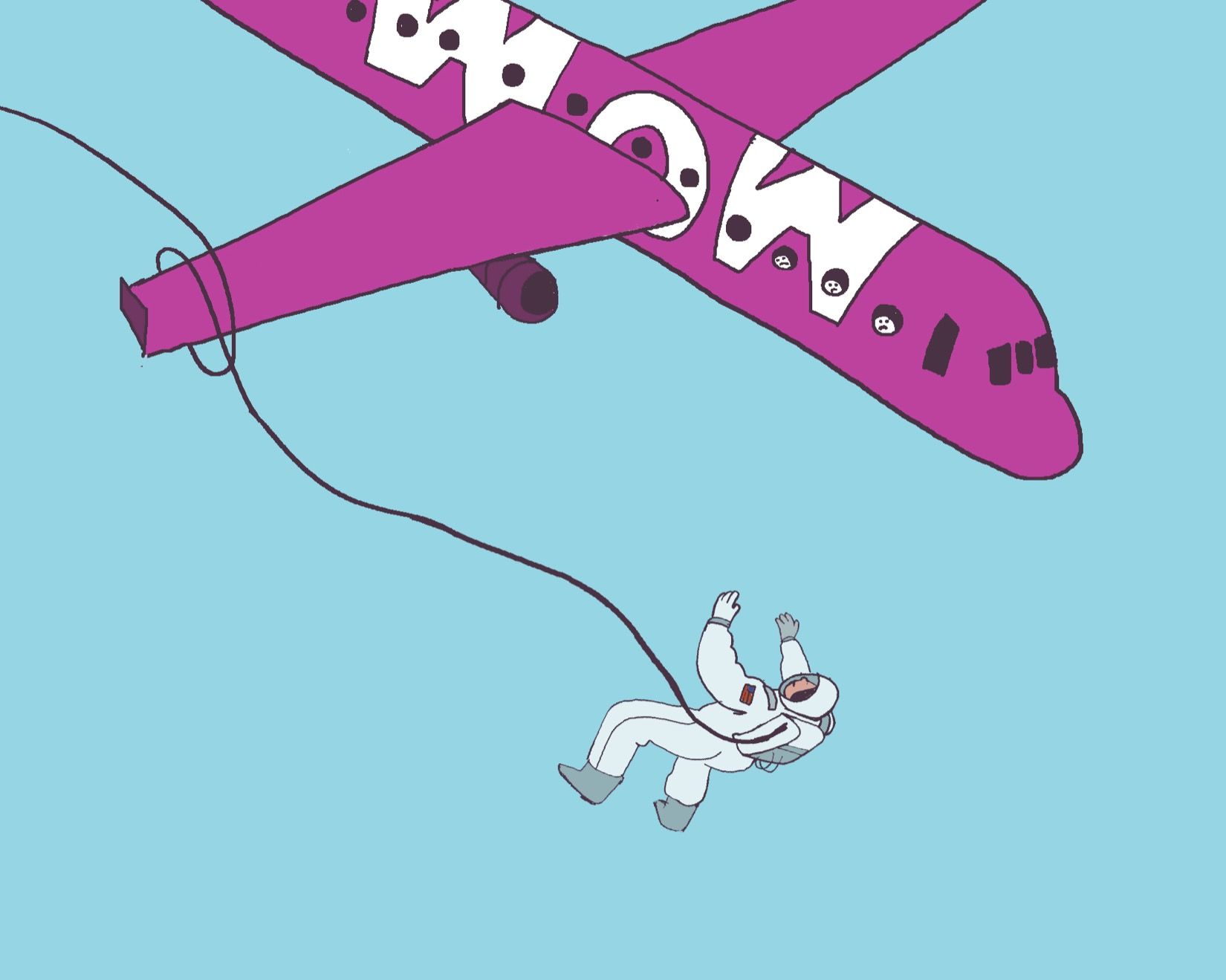 For months, the fiscal winds had been changing for WOW Air’s fleet of pink aircraft: fourth quarter reports appeared “materially worse than originally anticipated” and rival company Icelandair withdrew from a proposed merger in November, citing unspecified yet unsatisfied financial conditions. The relentless positivity of CEO Skúli Morgensen—who believed “not having all of the answers [was] part of the fun”—belied serious financial turbulence. Ultimately, WOW’s economic situation, unlike its fleet of magenta airplanes, could not be painted over. The airline declared bankruptcy on March 28, stranding thousands of travelers and laying off over a thousand employees.

WOW Air’s planes, operating exclusively out of Keflavik airport in Iceland, were each labeled with three-letter names such as “DOG,” “WIN,” or “GPA” (short for Grandpa). “I often say it costs nothing to smile,” replied Morgensen when asked by Outlook Traveller about WOW’s unique qualities. “I know this sounds simple, but it’s amazing how most airlines seem to have forgotten this simple fact.” Fancy customer service—a hold-over from an era when air travel required your Sunday best—was never WOW’s priority; both checked and carry-on luggage cost extra, as did food, movies, and seat choice. Instead, the airline marketed itself as a cheap, upbeat alternative to its more sober competitors—all of whom seemed to be operating under the conventional, conservative, and not-very-fun assumption that air travel should be taken seriously. But for those who have no scruples stuffing extra underwear into their coat pockets, low-cost airlines like WOW have long been staples of shoestring travel.

Despite unheeded parental warnings and unGoogled financial histories, I boarded my pink plane with more than a little of the usual flight foreboding. After heading to the middle seat of row 36—window and aisle seats cost extra—I sat down under a large, affirming sign which informed me that, indeed, the “Cool kids sit in the back!” Inside my seat’s pocket flap, the standard paper bags came plastered with a personal Vomit-O-Meter which helpfully ranked my airline experience from low queasiness (due to 'inflight panflute music' and ‘the pilot’s jokes’) to high nausea (caused by ‘obscene clouds’ and ‘our competitor’s prices’). And to request water—which would cost extra—I could simply press the overhead button labeled “Saved by the bell!” and be assisted by any of the friendly flight attendants, garbed entirely in pink felt who, according to Morgensen, had been trained into smiling service by professional actors.

In contrast to its onboard cheeriness, WOW Air was named the “worst airline in the world” by flight compensation company AirHelp, which ranked the pink air carrier #72 out of 72 companies for overall flight experience. But a highly nauseous flight experience, as one thousand stranded travelers can tell you, is better than no flight at all. After receiving an appropriately bashful email from booking site Expedia Travel alongside radio silence from the cowards whose website still allowed for ticket purchases until 7:00 AM on Friday morning, this traveler proactively processed her loss by joining “Wow Airlines Fail,” an up-and-coming Facebook group dedicated to comparing the pink aircraft to vintage biplanes. Since 2015, the creators of the group—who wouldn’t fly with WOW even “if you paid for my trip up front with free tickets”—have been dedicated trash-talkers of the airline that allegedly charged its passengers five Euros for a small water bottle, among other crimes.

“Great Scott!” said the CEO of Spirit Airline on Friday morning, whose New York Times push notifications must have seemed a proverbial parting of the clouds. “Holy Moly!” said helicopter parents and resentful Facebook groups everywhere, who experienced the news as sweet, sweet vindication. “Jesus Fucking Christ,” said the entire nation of Iceland, whose rapidly growing tourism sector is largely due to WOW Air’s initial success and who briefly debated using taxpayer money to bail out the airline. But having gained a generalized fear of three-letter words and having lost a lot of money, this bitter creditor prefers to silently interpret the news not as a lesson in corporate irresponsibility, but in capitalism’s inability to take a joke. Perhaps WOW Air was slightly too comical for an industry that still inspires enough fear to elicit nausea levels—higher even than those caused by suggestive clouds—in much of the population. And perhaps Morgensen, who believed that his carbon-gushing planes were “environmentally sound,” was the not the right man to pilot one of Iceland’s most precious companies. But in a world where corporate crimes facilitate myriad injustices as well as an impending climate catastrophe, an airline silly enough to call itself WOW deserves at least marginal respect.

A miniature milestone for women in STEM was clumsily cancelled last week when NASA announced it was changing plans for the scheduled all-female spacewalk on March 29. The walk was not, in fact, meant to be a carefully planned gesture for gender equality: The agency discovered quite by accident that the seven hour procedure to replace batteries would be space’s first staffed exclusively by women astronauts, and was excited to announce the fact that they would be accidentally celebrating International Women’s History Month. NASA spokesperson Stephanie Schierholz originally admitted of the all-female walk: “We feel lucky that it just sort of happened to be in Women's History Month.” Sadly, in what can only be considered a giant leap in neither direction, they retracted their impromptu announcement, because the International Space Station didn’t have spacesuits that fit the two women. Instead of astronauts Anne McClain and Christina Koch completing the mission, Nick Hague would tap in, as he has a different sized torso from the two women.

NASA has never been particularly perceptive toward the needs of female astronauts. Before her first mission, Sally Ride reported NASA officials had timidly asked her whether 100 tampons would be sufficient for her seven day total mission. Though the agency is better populated with women than ever before—at time of reporting, NASA lists 38 active astronauts, 12 of whom are women—this gesture doesn’t reflect well. That said, the gaffe of last week’s swap doesn’t really put the feminist takeover of space back any parsecs. More interesting than NASA failing to do justice to their female staff is what this press embarrassment reveals about the agency’s eagerness to provide headlines for a presidential administration that has become somewhat obsessed with rekindling interest in space activity.

President Trump’s recent announcement of his plan to send more astronauts to walk on the moon was the latest in a long line of space-related policy measures. In 2017, Vice President Pence reconvened a space council that had been active during George H.W. Bush’s administration, and this past summer the President announced plans for a military Space Force. NASA has received more funding and attention than they have in decades, which is shining some light on their gaps in equipment and outdated policies. One of these is the fact that in the 1970s, the agency stopped tailoring suits to individual astronauts, taking what the New York Times described as a, “Mr. Potato Head” approach to suit design. This “one-size-fits-all” strategy was the guiding force behind the creation of the suits, but in a report NASA engineer Elizabeth Benson wrote in 2009, she described the policy more accurately as, ‘“one-size-fits-all-men.” The suits were designed explicitly with men’s body shapes in mind; as astronaut Peggy Whitson, who holds the record for time spent in space, said, “As a woman, doing spacewalks is more challenging mostly because the suits are sized bigger than the average female.” Several women astronauts who have travelled to space didn’t even get the opportunity to walk, because NASA totally spaced, sending them up there without suits that would fit them.

Recently, NASA’s budget cuts in the 2000s contributed to the agency’s lack of medium-sized torso parts, considering that each part cost about $20 million to make. Frankly, the bait-and-switch with Anne McClain is of more interest because NASA is feeling pressure to make space relevant again. NASA’s mild gesture and then retraction probably won’t affect the course of gender politics, but the Indy doesn’t think it would be too much to ask for women astronauts get the same opportunity to walk in space as men, and suggests that if NASA gets the funding to make another space suit, they make one these female stars will feel comfortable in. With pockets.