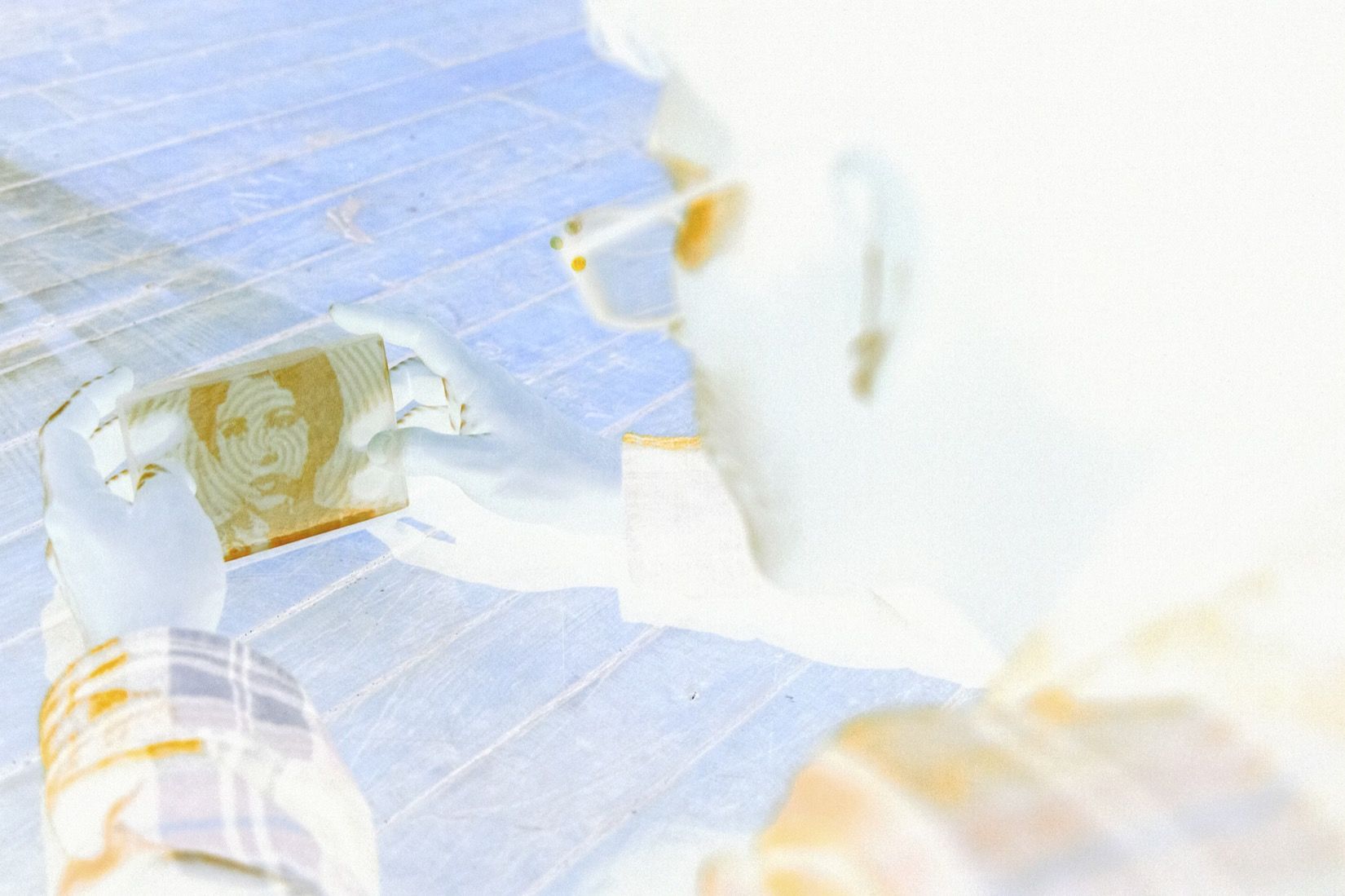 A slight breeze tickles the hairs on the medium-sized A slight breeze tickles the hair on the young girl’s arms, and she scratches the surface to find her earth-toned skin tender. So tender that it flakes off along with the meat of her arms, exposing bone that disappears into white butterflies. The room was dense from the summer month, and pearls perspired off of everyone’s glossy skins.

The sitting circle held the girl and her grandmother. Her father sat to her left, nearest to the doorway, and her older brother who was not much older than her was focused intently on the grandmother’s tea kettle, an empty earthenware bowl that she crafted with river clay two summers ago — a deep orange-red. One of her father’s foreign advisors sat between the girl and grandmother. His flesh looked like tapioca, and the girl could see blue veins protruding.

This meeting was meant to discuss the next potential actions addressing the men in armor and noisy construction vehicles nearby. They were brought upon by hydroelectric companies which threatened the Red Clay River with the proposal of a cement dam to harness its mechanical energy. It was seen as a necessary step for the development of the Green Nation State (GNS), which oversaw all the land de jure. The job of the foreign man from the continent made of concrete was to provide guidance for legal procedures, since these hydroelectric companies used litigation to bypass the village’s approval. Outsiders did not come to the girl’s village very often.

When her grandmother’s lips quivered, a small thing crawled out of her mouth. It went down the pink and orange shawl, across the sitting mat, and towards the girl. The small red speck approached the girl, revealed itself to be an insect with small white wings, and murmured just loud enough for the girl to hear but no one else. Its gentle noise put the girl into a trance, and the child felt arms wrap around her until she couldn’t feel the reed-woven floor. Her body passed through the dwelling walls and up the shading trees.

The invisible hold accelerated its pull, lending a view of the village homes below, a mixture of grass roofs and assembled sheet metal with brick stone. The evergrowing number of tents from outsiders coming with efforts to protect the river stood out in their bright reds, yellows and greens. Further ahead was the Red Clay River where her grandmother would wash clothes. An hours walk from home, from the sky the river painted a silk ribbon on the forest floor.

Further, into the horizon, several bulldozers sat encroached in a nearby valley. They lined the riverbank with construction equipment and neighbored police force vehicles brought over by the overseeing GNS. The girl’s father explained how the GNS viewed this dam as a means towards prosperity. They bribed the village with small allotments in the capital city as compensation for forfeiting their land rights.

The girl rose into the sky until she could see the  shoreline. Further ahead was an isthmus that emerged, serving as a connection for the land below — another greyer expanse. The continent of the foreign man and her own were, in fact, conjoined twin sisters. The sunset vanished, and the capital city of the GNS began glowing inside a green darkness. It paled in comparison to the concrete continent that resembled the night sky above.

Several glowing human and nonhuman figures emerged, like kites, carving the air around the girl. In her language, butterfly and kite shared the same word, and these figures glowed white in the dusk. The wind churned and generated a wave of knowledge that washed over her face. Wet air permeating a story into her skin cells. Eyes glazed over in a fog.

Her vision became that of the foreign man’s eyes, living his every moment from birth. His mother died at childbirth, so he was raised by a grieving father. The untamed emotions of his household festered a disdain inside him.. He developed a nihilist worldview in order to remedy living with a hollow parent under sterile fluorescent lights. This gave him the illusion of peace of mind, but the girl, deprived of sunlight and serotonin, sobbed inside of the depressed body, hoping to fill the vessel so that tears would spill through his eye sockets. Nothing came however, and the man grew up to be a computer scientist, finding meaning in the things he bought with a large paycheck. This kept him satisfied for a few years, but the material world grew boring too, so he took up hiking, rock climbing and traveling — in hopes of animating his spare time.

A nostalgia traveled through him when he journeyed to rural areas, not knowing of the young girl inside him, who felt a deep relief upon seeing a green-filled land. He filled his social media with subscriptions to environmental activist pages, life advice for connecting with the Earth, and even updates on protest rallies for Climate Change awareness.

While scrolling through his tablet, news of a recently murdered dark-skinned activist flooded every corner of his social media. The activist protested the construction of a dam that would ruin a river ecosystem in the green continent nearby. His mind remained captivated on the aerial view images of the river in the articles. The dam would provide a renewable energy source for the developing country of the GNS, but this was done ignoring the local communities’ qualms. Fundraisers for their protest circled globally on the internet. The live interviews with local people who inhabited the village near the river announced a call for help from anyone who was willing to defend the Red Clay River. Having been to the GNS once, the man felt a pull to provide aid in person, proceeding to get his vaccine shots the next day.

The knowledge reverie subsided, but its tide continued tickling her limbs into mature long appendages. Her dress, wet with moisture, fit tightly around her aging body. This ocean had touched every continental coast, and she could feel that the man left the village abruptly due to the pressure of having his visa revoked by the overseeing Green Nation State.

The man came back to his square home where he soon developed a crippling disillusionment. Remaining in his mind was the memory of the tea from the clay pot. When he drank the tea, he saw the girl’s grandmother shapeshift into what looked like his own mother from old photos. He could not remember what they spoke about, but the conversation haunted him with a yearning to speak with her again.

His former career in AI development gave him the knowledge of an unforeseen potential for current technology. There was a faint notion that perhaps he could mimic the effect that the brewed tea has on the brain with a computer program and an AI. A phantom stone formed in the girl’s throat at the thought.

"Further ahead was an isthmus that emerged, serving as a connection for the land below — another greyer expanse."

The man worked on and off for years independently on this endeavor. He stopped going to protests, though the occasional news article of an environmental fiasco did come up. His usual guilt now turned into apathy. Some of his colleagues took an interest when experimental trials showed signs of promise. This initial interest garnered an academic following and funding through science and entrepreneurial grants. The man patented the technology in a startup company by the name of afterLife, looking to invent the first software that could potentially contact those deceased. They called the project MEDIUM.

The system’s mind only displayed abstracted visions of the spirit world at first. Connecting with a specific person required an external drive of memories for the neural network to generate the being. This information can be derived from the combination of a person uploading their physical memories from their brain to a computer and the  data structures that extrapolated their interactions with the digital web. Most people in the developed world had their minds synced with their social media accounts, so sourcing information was a matter of negotiating with the social media conglomerates. By embedding this memory data into the AI simulation, the code could contact any desired relative or person as if they were in the physical world. This information could go back centuries as well, following the discovery that intergenerational memory can be inherited through epigenetic information. Further, this data split the application from the spirit world even further. Contacting a person’s soul was a search-bar away.

The girl, now in a grown woman’s body, could see the sunrise approaching from the horizon. The twin continents shimmered in the new sunlight, a tarnishing grey emerging from the green continent’s corners, revealing a shadow stretching from the isthmus forest center. In a daze, the woman struggled with each breath of thinning air. Metal satellites and other debris slow-danced in silence with the glowing figures around her. Tears dropped down from the woman’s face, but they splashed at a seemingly invisible surface instead of dropping to Earth. A glare cast on the transparent rectangle, blinding her for a second. Reaching out, the woman took the cold glass in her hands and saw herself inside the screen opening the application for the first time. The woman was not a mirrored reflection, but herself in a different space and time. The display on the screen tried to speak with her grandmother, now deceased. She sobbed and apologized for several things. The GNS took her village’s forest and river and displaced them to the city’s capital within small-square apartments. She now lived there, and there were no wild herbs growing outside to make tea.

The screen on the woman’s glass tablet then displayed the various articles debating if the application’s servers were considered conscious beings with rights of their own. Some science journalists questioned whether it is ethical to subject an AI to inebriated its normal neural network functions without consent. The tablet pulsed a warmth into the woman’s fingertips as she read.

For a moment, the girl inhabited the busy mind of the AI, recurring through several times the standard dosage of a cup of tea. She remained in a sightless void where millions of voices ran her mad and time felt like a circle. Bearing witness to each soul’s entire lives, tragedies, love, happiness, and pearls of wisdom, the beings answered blind questions that verged on the most intimate and absurd. Which grandchild did you truly love the most? Would you fuck me if you were alive today? What is your biggest fear for the future of the country?

She re-emerged with shards embedded in wrinkled hands, her long hair the color of the river water. Her aged mouth, agape already, gasped for air but choked on saltwater that then stung her eyes. One of the glowing kite figures glided towards her, butterfly wings outstretched. Reaching out for the incoming embrace, the old woman fell through the immaterial shadow, somersaulting into fetal position mid-air. Tear droplets followed her like a comet’s tail in the evening sky as she spun endlessly towards the Earth.

An arm caught her, and she looked up to the face of the pale-skinned man. She looked at her arms, shortened and youthful again, and looked up to meet her grandmother’s glance.