City Upon a Hill

A study in the geopolitics of elevation 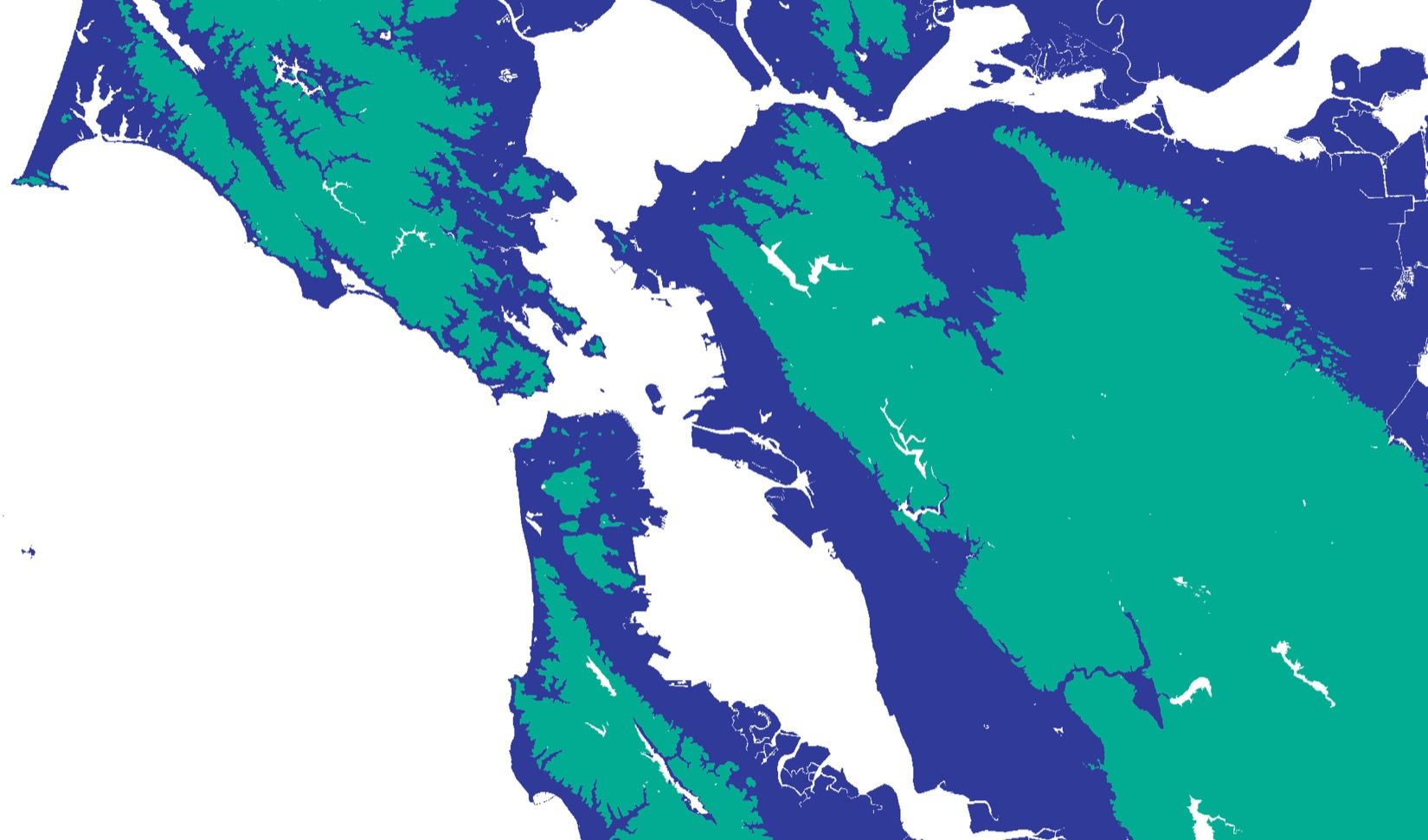 The Berkeley hills bound the city to the east. The ridge stretches up and down the eastern bank of the San Francisco Bay Area, draped with a network of narrow windy roads. A series of expansive regional parks and a network of pedestrian paths cover much of the land where nearby residents go to escape city life and soak up the open, green space. Nestled among the peaks and ravines of the East Bay hills are countless viewpoints gazing out over the Bay Area. Everyone in Berkeley has their favorite. In the summer, a blanket of fog swallows the hills in the morning. By afternoon, it surrenders into a crystal-clear blue sky, and an enchanting panoramic view of the Bay is possible. At dusk, retired hippies, UC Berkeley students, and stoned teenagers gather in the hills to watch the sun slowly bleed across the Pacific and the lights of the metropolis begin to dance.

Like many other urban hills, those in Berkeley are where the rich live. It is no accident that the hills (and foothills) are by and large white and wealthy, and the flats are home to more people of color and people of lower economic status. A 1912 pamphlet advertising property in the Berkeley hills said it was an unparalleled investment because of the amenities of the neighborhood, the restrictions that made it the “cream” of North Berkeley with “No Asiatics or Negroes,” the access to transportation, and the scenery. Over the course of a century, race-based zoning, restrictive covenants, and redlining reinforced the hills as a upper-class enclave. In the 1960s, no real estate agent would even show my great-uncle Burton (who is white) and my great-aunt Brunetta (who was Black) a house in the hills. The amenities that made property in the hills profitable in 1912 have been preserved more than 100 years later: The hills are exclusive low-density neighborhoods with incredible views, beautiful natural surroundings, and proximity to the center of a world-class urban center.

The Berkeley hills are not unique. Up and down the Bay Area, from Mill Valley to Pacific Heights, the hills function the same. The Oakland hills, Marin County, and the non-uniform slopes of San Francisco sprinkled throughout the city generally conform to the rule: the higher the elevation, the higher the income. Through my own research, I discovered that the median household income above 50 feet in elevation in the Bay Area is $127,929, while the median household income in areas lower than 50 feet is $98,943.  The socio-political significance that elevation holds in the Bay Area is replicated in other American cities, including New York and Los Angeles. The hills, it seems, are often a visual manifestation of class divides.

In the Abrahamic religions, hills, mountains, and high elevation are associated with religious purity and enlightenment. In the Bible, Moses summits Mt. Sinai to receive the ten commandments—an allegory for spiritual elevation. Also in the Bible, the phrase “City Upon a Hill” rhetorically refers to something that is highly visible and held in high regard. Famously, John Winthrop evoked this idea before the Massachusetts Bay colonists set sail for the New World, and since then the idea has symbolized United States exceptionalism. In the Quran, the Prophet Muhammad climbed Jabal an-Nour, a mountain outside of Mecca. It is on this mountain, whose name translates to “hill of the illumination,” where he is thought to have received his first revelation. In ancient Greek mythology, Mt. Olympus is the home of the gods. Hills and mountains offer a proximity to god; religious and spiritual purity exist up high.

Practically, hills have been a desirable place to settle. The “high ground” is more easily defended because of the tactical advantage of slopes and the visibility of the lands around them. Settling in the hills also has the advantage of keeping inhabitants safe from flooding and swamplands and the disease that they breed. That is why cities across the world— Ancient Rome, Athens, Montreal, Istanbul, Ammam, and Tehran—have been settled on hills.

In the contemporary United States, the hills represents a new and improved version of the suburban dream: the seclusion and open space of the suburbs paired with the economic opportunity and cultural capital of the city. Often only accessible by car, pseudo-suburban hill communities are set apart from the rest of the city. This isolation affords residents more privacy and less of everything that an urban lifestyle entails (noise, crowds, and the like). However, as in the case of 20th century of suburbia, the isolation of neighborhoods in the hills is not just natural. While explicitly racist laws—like those that were common in many upper-class enclaves, like Beverly Hills and Piedmont, LA—are no longer on the books, the spacious yards and boundless views of hill enclaves that used to explicitly discriminate cost so much that only the super-wealthy can afford to live there.

Living in the hills also often means low-density housing and more open, green space. Richard Walker, in his book The Country in the City, describes how the long history of environmental activism in the Bay Area was largely carried out by and on behalf of the economic elite. The product is a network of preserved green space in the Bay Area hills, publicly available to everyone, but most accessed by the upper-class districts that surround them.

Much is the same in Los Angeles. In his 1971 book Los Angeles: The Architecture of Four Ecologies, Reyner Banham, a prominent English urbanist, calls the Los Angeles foothills the “epitome of the great middle-class suburb.” Since then, the property values of those neighborhoods have skyrocketed. The stretch of foothill neighborhoods from Pasadena and Highland Park to Hollywood, Beverly Hills, and Bel Air and out to Malibu are now upper-class suburbs of Los Angeles. In a city whose urban landscape is defined by concrete, with its famed automobile lifestyle and jungle-like highway system, the Verdugo and Santa Monica Mountains, which these wealthy neighborhoods border, are natural islands among the sprawling grey landscape. This natural sanctuary is most coveted and accessible to the upper-class neighborhoods surrounding it. As the rest of the city looks up to the Hollywood sign in reverence, so too does it revere the mansions of Bel Air and the Hollywood Hills as the quintessence of LA prosperity.

What is unique about living in the hills in LA or the Bay Area is that, if you are super-wealthy, you can have a single-family home, a spacious yard, and access to green space—all within walking distance of metropolitan amenities. The Berkeley hills possess everything that 1950s suburban dream promised, but instead of pre-fab houses in the middle of nowhere, they enjoy ever-increasing property values, the opportunities of city life, and the cultural capital of living in quirky Berkeley.

In New York City, the marvel and hegemony of elevation transcends the hill as a geologic formation. By virtue of its flat terrain compared to the topography of the skyscraper, elevation is accessed through an elevator. Michael Sorkin, in his book Twenty Minutes in Manhattan, describes the intersection of class and elevation. In the 19th century, the top floors of apartment buildings housed servants, students, and artists. Living up high meant long walks up, smaller units, and certain peril in the case of a fire. When the elevator was invented and the skyline soared, so too did the allure of elevation. “Desirability came to be associated with view and with a sense of commanding the uppermost, a value based on a combination of military, theological, privacy, and prestige matters,” writes Sorkin. The idea of the “penthouse” emerged as the most desirable place, a home with maximum visibility and privacy, sitting above all the mayhem of the rest of the city. A country house in the clouds. In an urban landscape like New York City, where tranquility cannot be secured by retreating to pseudo-suburban hills, the wealthy can escape the density and chaos of urbanity by ascending to the top floor. There, they can gaze at the rest of the city below them.

But hills do not evoke wealth everywhere. In many large cities in Latin America, the hills are home to low-income and squatter settlements. In Rio de Janeiro, favelas, dwelling places similar to shanty towns, usually constructed with salvaged material created by squatters, cover the steep hillsides. According to the 2010 census, 6 percent of Brazil’s population, and 2.6 million of the 13 million residents of Rio de Janeiro, live in favelas. Favelas occupy what geographers Greg O’Hare and Michael Barke call the “internal periphery”—land that is too expensive or unsuitable for building commercial buildings. Rio de Janeiro is a city laid out on drastic slopes covered in favelas—a far cry from the multimillion-dollar houses overlooking the private beaches of Malibu. Shantytowns in Caracas, Venezuela, Lima, Peru, and other large South American cities follow a pattern similar to Rio de Janeiro’s.

In a rural American context, the hills take on a drastically different connotation. Hillbilly—a term that is often derogatory—loosely refers to people living in rural, mountainous areas of the United States. In 1900, the New York Journal wrote, “A Hill-Billie is a free and untrammeled white citizen of Tennessee, who lives in the hills, has no means to speak of, dresses as he can, talks as he pleases, drinks whiskey when he gets it, and fires off his revolver as the fancy takes him.” Outside of American metropolitan areas and wealthy vacation destinations like parts of the Berkshires or Aspen, Colorado, elevation does not hold the same monetary or social value. The decidedly American suburban ethic that is so central to the shaping of American urban space and the American Dream no doubt plays a role in producing the appeal of the urban hills.

Providence (along with a suspicious number of other cities, like Ancient Rome, Moscow, and Jerusalem) was built on seven hills. It was on the banks below Prospect Hill where Roger Williams settled and created the Providence colony, and it is on that same hill that Brown University sits today. In Terrace Park stands a statue of Roger Williams. With the wealthier and whiter East Side, home to Brown and the Rhode Island School of Design, to its back, the statue looks out over the modest skyline of Downtown, the Rhode Island capitol building, and the working-class South Side. The hills of Providence, like so many other American cities, carve a class-based division into the city. Personified through the paternalistic settler watching over the rest of the city, with an impersonal expression and judicious gesture cut into stone, the East Side stands, a cut above.

JESSE BARBER B'19 is running for the hills.