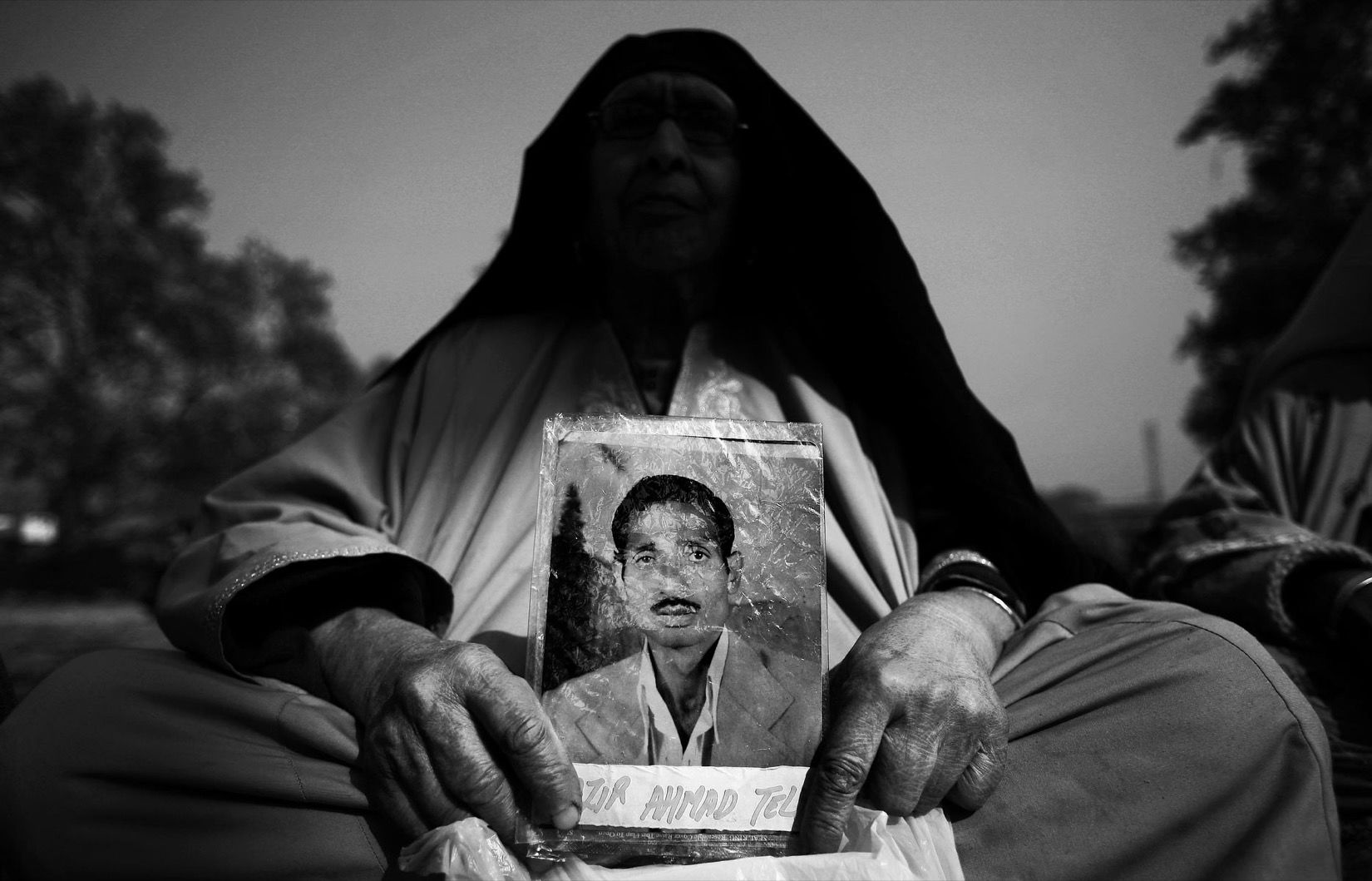 Mughal Mase sits at an APDP demonstration, holding a photo of her son. Photo taken as part of a series by Altaf Qadri

On the 25th of every month, dozens of members of the Association for Parents of Disappeared Persons (APDP) gather in Pratap Park in Srinagar, Kashmir. They sit in a semicircle on an expanse of grass, women on one side and men on the other, around a hand-painted canvas of faces laid out in the middle. Each of the participants in the action holds a photo of their sons and husbands, who have been disappeared by the Indian Armed Forces.

Nayeem Rather, a Kashmiri journalist who works with APDP recently spoke at length with the College Hill Independent about the use of enforced disappearances. “The Indian state is at war with the memory of Kashmir, so our work is also a kind of struggle against forgetfulness,” he said.

APDP’s website cites a tally of 8,000 to 10,000 reported disappearances of Kashmiri people since 1989, the beginning of a nascent armed insurgency movement for independence that prompted the Indian armed forces to enter into the region by the hundreds of thousands. Under the protection afforded to them by the Armed Forces Special Powers Act (1990), the Indian army continues to use disappearances as one of many tactics to repress the independence movement, including extra-judicial killings, custodial torture, rape, forced labor, and more recently, pellet gun shootings. The primary targets of disappearances include students, political activists, and any civilians who the Indian state suspects are agitating for independence. Among the state’s many human rights violations, these disappearances are unique in their pernicious assault on the collective memory of the Kashmiri people.

Just five days ago, in an interview with News18 in New Delhi, Indian Prime Minister Narendra Modi rejected the possibility of repealing the Armed Forces Special Powers Act (AFSPA), comparing the suggestion to “sending [India’s] soldiers to the gallows.” This statement follows the February 14th suicide bombing that took place in Kashmir’s Pulwama district, in which a 22-year-old Kashmiri man, Adil Ahmed Dar, drove an explosive-laden vehicle into a convoy of Indian armed forces, killing 40 soldiers and injuring many.

Ather Zia, founder of Critical Kashmir Studies Collective, reported on the incident for Al Jazeera, tracing the originary point for Dar’s political motivations to an incident earlier in his life, in which armed officers detained and humiliated him, forcing him to repeatedly “rub his nose [against] the ground.” Few other media outlets, both in South Asia and abroad, have reported on Dar’s and his family’s past experiences with Indian armed forces—just one of many instances in which media coverage on Kashmir often fails to acknowledge how genealogies of Indian state violence shape the political consciousness of Kashmiri insurgents. Dar, like many his age, had never known a Kashmir free of occupation.

Javid was 17 years old when he was captured by the Indian National Security Guard from his home in Battamalo (close to Srinagar) in August 1990. His mother, Parveena Ahangar, attempted to trace him through legal means, by filing multiple petitions in the Jammu and Kashmir High Courts, including a complaint that reached the Home Ministry’s office in Delhi. She also tried conducting her own search for her son by visiting army camps and meeting with multiple government representatives, but ultimately these combined efforts were unsuccessful due to a combination of discrimination and corruption. In an interview with Rather, she says, “this was the time I lost faith in the justice system of India...They were all lying. They assured me that they would find my son. But they didn’t help.”

In her visits to prisons, torture cells and military camps, Ahangar came across numerous other aggrieved parents who shared similar stories. In Kashmiri filmmaker Iffat Fatima’s 2009 documentary, Where Have You Hidden My New Moon Crescent?, Ahangar listens as a fellow mother named Mughli Mase explains their first interaction: “[We] met on the road and connected.” Almost instinctively, Ahangar finishes Mase’s thought: “I was searching, she was searching.”

Ahangar started the APDP in 1994 alongside Kashmiri activist Parvez Imroz as a collective of family members united by a simple demand: for the Indian government to tell them where their disappeared sons and fathers are being kept and to return them immediately. In their disappearances of politically active Kashmiri men, the Indian state has left the households to which these men belong without stable breadwinners. Despite the ever-present threat of poverty and precarity, the wives and mothers of disappeared persons still volunteer large amounts of time and energy to the APDP. In fact, according to Rather, “the core of APDP’s decision making apparatus is controlled largely by women,” who take charge of day-to-day activities such as organizing protests and demonstrations, writing press releases and executing plans.

The wives and mothers of disappeared persons have come to be called ‘half-widows’ and ‘half-mothers.’ This language locates these women in a liminal space: The Indian state refuses them the right to fully mourn, yet also refuses to return their family members. Rather questions the very language of ‘half-widow’ and ‘half-mother,’ and is skeptical of its origins: “[The] APDP movement does not consider the disappeared dead,” he explains, “So, [...] if someone’s husband is not dead, how come she’s a widow?” And, indeed, APDP’s public demonstrations of mourning allow Kashmiri mothers and wives to reaffirm and visibilize their relationship to their disappeared loved ones in reaction to state powers that have attempted to render invisible. However, Kashmiri women like Mughli Mase are not mere icons of mourning—they are originators of anti-Indian-occupation organizing, vital to the struggle for Kashmiri azaadi (freedom) and to a global audience’s reckoning with the violence of enforced disappearance.

Indian military occupation in Kashmir operates primarily through a visual register; the barbed wire fences, army tanks, stationed military personnel, unmarked grave sites, and mass blindings constitute what Deepti Misri, scholar and co-founder of Critical Kashmir Studies Collective, calls the Indian state’s “optical regime.” By superimposing symbols of militarized power and displays of death onto the landscape of Kashmir, the Indian state controls what can and cannot be seen—and who can be disappeared at any moment.

In response to the state’s constellations of visual control, APDP organizers establish mourning as a means of reappearing lost loved ones. The iconic pose of parents—and, specifically, mothers—holding portraits of their sons reinstates and visibilizes a relationship that the state has attempted to dissolve. “APDP is involved in remembering and reconstructing the lives of those who were disappeared,” Rather explained. Images of both Ahangar and Mase at these demonstrations reveal how their figures, positioned behind the portraits, allow their sons’ visual presence to inhabit a material form. The women activists’ use of portraits to reconstruct the existence of their disappeared persons, therefore, serves as an inventory of loss, a means through which mourning, as public demonstration, calls attention to—and flagrantly denounces—the unending nature of enforced disappearances. Their displays of mourning, in this sense, are not mere performances or embodiments of victimhood—they resurrect and materialize the very memory of their disappeared relatives that the Indian state attempts to erase.

Azaadi, for Kashmiris, has historically contained many valences and signified many political possibilities. Some want to merge with Pakistan, while others, like Rather, believe in an independent sovereign Kashmir. A long overdue plebiscite, authorised by the United Nations Commision for India and Pakistan in 1949, would give institutional sanction to the multiple voices within the Kashmiri self-determination movement. However, despite diverging opinions on what an Azad Kashmir would look like in the future, “most people,” Rather says, “will converge on this point: azaadi means ‘Go India, Go Back.’” Many larger anti-occupation protests in Kashmir feature this rallying cry, which appropriates a famous Indian colonial era slogan, ‘Go Simon, Go Back,’ and repurposes it against the Indian occupation.

APDP activists’ demands for India’s withdrawal compound the urgency with which they organize for the right to reunite with their family members. “My God, just once,” Mase says, “may I look at [Yusuf] and he look at me...and then I [could] close my eyes forever.” Through the lens of Mase’s and Ahangar’s narratives of loss, azaadi not only means liberation from Indian occupation but also from the ongoing cycle of disappearances.

The last few moments of Fatima’s film show Mase sitting in her home, next to Ahangar, who has joined her for afternoon chai. Mase speaks slowly and directly to the camera, “Precious son, you are lost. The sky is blood rimmed—the earth is torn asunder … My Yusuf, I call you. Hear me.” Mase pauses, unable to continue. Again, and for the last time, Ahangar picks up where Mase left off: “Come… my heart’s beloved, I await you.”

TIARA SHARMA B'20 and KANHA PRASAD B'21 wrote this in memory of all those disappeared by the Indian state—10,000 and counting