A look at Cohen v. Brown and legal battles over Title IX, in athletics and beyond 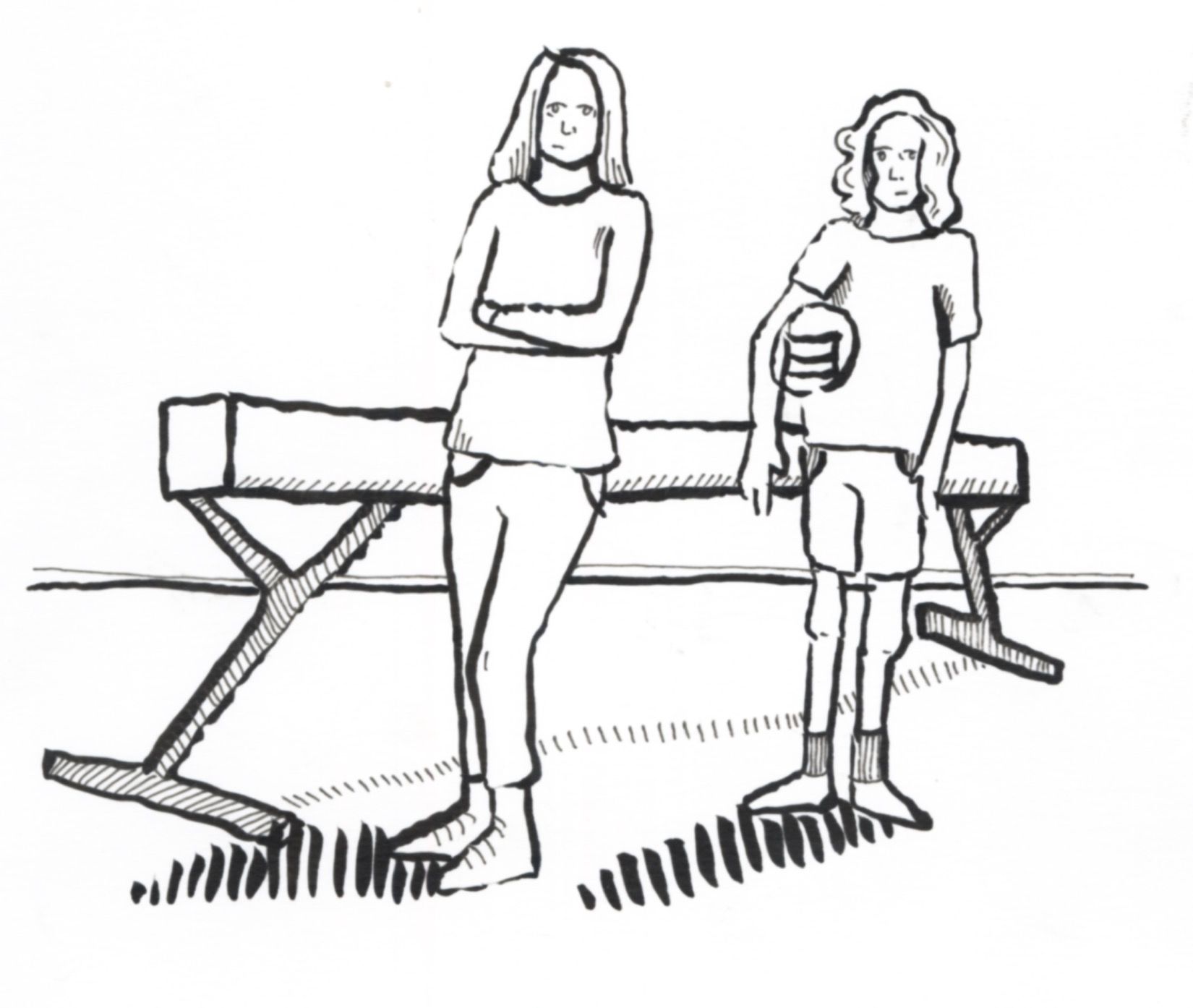 Lifetime civil rights attorney Lynette Labinger is sharp and confident, sitting across from me in an ornately-decorated office that disguises the kind of rfspartan fortitude that civil rights law requires. We’re at the Rhode Island ACLU’s office on Dorrance Street, where Labinger has been recently entrenched in the contentious fight for the Reproductive Health Care Act (RHCA), the bill codifying Roe v. Wade into Rhode Island state law passed by the Rhode Island House of Representatives last week. She’s no stranger to tough fights—almost three decades before the RHCA, Labinger took on Brown University, representing students in a mammoth Title IX case that stemmed from cuts to women’s varsity teams in 1991.

Title IX prohibits discrimination on the basis of sex at all levels of federally-funded educational institutions; however, it has historically been most visible for its gender equality protections within collegiate athletics. While Brown University, on its website, currently boasts the “largest [athletics] program for women” in the nation with 21 varsity teams, it was entangled in a Title IX athletics case from 1992 to 1998. Labinger’s case, Cohen v. Brown, was brought by students against the university, which announced demotions for four sports teams in 1991 for financial reasons. Women’s gymnastics and volleyball, as well as men’s golf and water polo, were no longer to be offered at the varsity level. According to a Brown Daily Herald article at the time, the cuts were supposed to save the university about $75,000 annually. The cut teams were allowed to compete at the “club varsity” level, surviving only on private funding.

However, this relatively small amount of savings came at a large cost to the university, as affected students subsequently filed a class-action lawsuit against Brown for an alleged Title IX violation. Brown chose to fight the case instead of settling, and so began a lengthy and expensive legal battle—Cohen v. Brown—in which Labinger played for the students’ team. The plaintiffs were mostly varsity gymnasts, with the lawsuit’s namesake Amy Cohen as co-captain, joined by members of the volleyball and water polo teams.

“Suing the school was a last resort,” said Lisa Stern Kaplowitz, one of the plaintiffs in the suit and former varsity gymnast recently inducted into Brown’s Hall of Fame, in an interview with the Independent. She recalls having to hand-sew her teammate’s practice uniforms due to a lack of funding, and an infamous bus ride in the New England weather where the door wouldn’t fully close.

Cohen v. Brown would go on to define how athletics departments manage participation opportunities at Brown and surrounding universities. Almost 30 years later, following recent federal announcements of changes to the ways universities must interpret Title IX regarding sexual and gender-based violence, this case exemplifies the complexity of the law’s impact on gender equity in higher education.

“The message was, this happens, we point out Title IX to them, and they put the teams back—except ours,” Labinger said in a recent interview with the Indy, referring to the initial mindset of the plaintiffs. “We had not started looking into anything about the team structure, how well they were supported, and how other teams were supported.” Throughout the course of the case, however, Labinger’s team of civil rights lawyers would discover an overall disparity in support for women’s athletic program. They deposed all the coaches on the men’s and women’s teams and examined equipment, budgets, and practice schedules.

At the time of the suit, Brown had large participation across the board on varsity sports teams, with men’s participation about 11 or 12 percentage-points higher than women’s, whereas the enrollment of undergraduates in the university was about equal. When the Athletic Department made cuts to varsity teams, they did so equally—the same number of men's and women’s teams were cut (two each).

According to the federal Office of Civil Rights’ official Policy Interpretation, in order to be in compliance with Title IX, “intercollegiate level participation opportunities for male and female students” needed to be “provided in numbers substantially proportionate to their respective enrollments.”

The main arguments concerned how to count. Labinger’s team said that the percentages of men and women competing in varsity sports should match those of the undergraduate enrollment. Brown, on the other hand, argued that the “participation opportunities” at the time reflected student interest in athletics, and that men had more interest than women. The university also rejected this idea of strict proportionality, claiming that it created quotas and stated in a post-hearing memorandum “Title IX is not an affirmative action statute.”

In the first trial in 1992, the plaintiffs asked for and were granted a preliminary injunction, which restored their teams to varsity status. Brown fruitlessly appealed the injunction in 1993. The second round of trials took place in 1995, and Brown would once again appeal a lower court’s decision in the plaintiffs’ favor. After the First Circuit Court of Appeals upheld the lower court ruling, Brown even attempted to appeal again to the Supreme Court in 1997, a petition that was rejected.

Cohen v. Brown was the first Title IX case of its type to receive an appellate court decision. The Civil Rights division of the Department of Justice even filed an amicus curiae brief in support of the plaintiffs in the appeals court.

“By the time we settled the case, it wasn’t just women’s volleyball and gymnastics that got restored,” said Labinger. “We also got women’s water polo and women’s skiing.” In the years after the settlement, Brown’s athletic department additionally developed varsity women’s golf and equestrian teams. Men’s golf and water polo were also restored.

“We’re not playing musical chairs on a finite table,” Labinger said, referring to the amounts of teams in the athletic department’s budget. “We’re talking about building a bigger table.”

The desired effect of Cohen v. Brown, in line with the results it achieved at Brown, was for schools to bolster their women’s athletic departments, matching investment in men's programs. However, this response wasn’t universal. Providence College, for example, ended up cutting their men’s varsity baseball team in 1998 to get their athletic participation numbers in proportion with their undergraduate enrollment. Rev. Terence J. Keegan, then executive vice president of the school, told the New York Times in 1999, “We just couldn’t risk that kind of litigation,” referencing the costs of the Brown lawsuit to justify the decision.

In cases like Providence College, this ‘less, not more’ approach to Title IX can create an animosity towards the law and end up hurt both men’s and women’s athletics programs across the board, argued Paul Whitty in a 2002 article in The Cowl, Providence College’s student newspaper. “The law that was meant to promote female athletics was only limiting male opportunities,” he writes, “Title IX” has become a hated term by many at Providence College and other schools across the country.”  But Title IX is first and foremost an anti-discrimination law, and subsequently, rulings like Cohen v. Brown are meant to reinforce gender equality.

Technically Cohen v. Brown is still active, and relevant, at Brown. As part of the suit, Labinger and her team still receive annual reports about sports participation numbers on men’s and women’s teams. The settlement mandated that percentages on sports teams for each gender reflect the undergraduate enrollment of each gender within a margin of 3.5 percent, and Labinger’s team calculates these percentages each year to ensure the university stays accountable to its women athletes.

Title IX is a single sentence, without any mention of the word “athletics.” In 1974, in order to calm fears that Title IX would lead to the "possible doom of intercollegiate sports," as the head of the NAACP Walter Byers put it, Texas Senator John Tower proposed an amendment to exempt athletics from the scope of the law. Congress rejected the Tower Amendment and instead mandated that the Department of Health, Education and Welfare develop regulations on how to apply the law to athletics. Today, Title IX’s teeth come from Policy Interpretations, documents developed in 1979 by the Office of Civil Rights that outline specific guidelines on how to maintain gender equality across its many fields.

Last November, Secretary of Education Betsy DeVos announced proposed changes to Title IX’s sexual and gender-based harassment regulations. Secretary DeVos’s new regulations include controversial provisions as to how universities conduct investigations into alleged incidents. Specifically, they extend due process protections to these campus investigations, including a “presumption of innocence throughout the grievance process, live hearings in the higher education context,” and “the opportunity to test the credibility of parties and witnesses through cross-examination.” In effect, these proposed changes would transform internal campus investigations into courtrooms. As Brown University President Christina Paxson stated in her response letter to these changes, this shift “may deter students from reporting sexual misconduct,” and “campus disciplinary proceedings are not, and cannot ever be, substitutes for or analogs to courts of law.” Rhode Island Governor Gina Raimondo and Postsecondary Education Commissioner Brenda Dann-Messier also sent in a letter in opposition of the changes.

However, in a city as full of colleges as Providence is, some sort of uniformity across schools could be beneficial. Providence-based criminal defense lawyer John Grasso wrote in a Providence Journal opinion article last year that “campus sexual misconduct is handled much differently at Providence College than it is at Brown University than it is at the University of Rhode Island.” Grasso concluded, “In my experience, no two colleges or universities follow the same process and the result is grossly disparate and inadequate treatment of the very students it intends to protect.”

In 2016, Brown University was sued by a Providence College student after she was allegedly sexually assaulted by three Brown football players. She claimed that Brown University did not provide her a prompt investigation in accordance with Title IX. The case was dismissed in district court, and the decision was upheld in appellate court, on the grounds that third-party students are not protected under a university’s Title IX.

From establishing how gender equality in sports actually looks to constructing systems for survivors of sexual and gender-based violence to hold perpetrators accountable, Title IX has been expanded from a single sentence to a sweeping piece of legislation affecting all realms of campus life across the nation. It has always been contentious and complex, from 1972 to 2019.

AMELIA ANTHONY B’22 wants to be a lawyer.