Money in Your Mouth 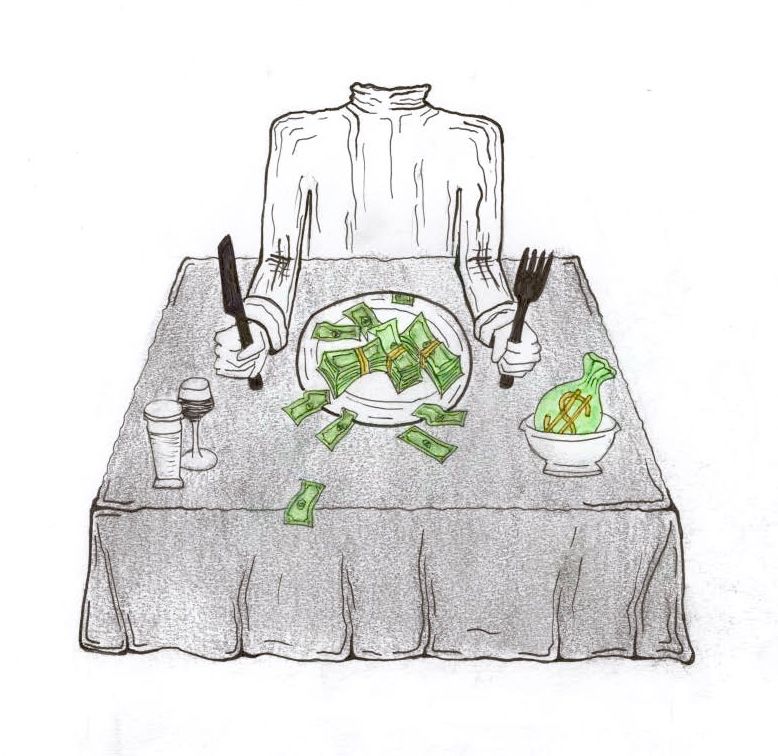 And then the money was in your mouth. So much money you were always eating salad, those pretentious, extortionate salads your father would have laughed at if he were still alive to be offended. He would have hated the ludicrous prices these new Manilenyo cafés calligraph onto their green Parisian chalkboards for salads with vegetables you’ve never even heard of, salads that you wash down with high-calorie cocktails flaunting their feathers like that peacock you and your father saw at the Manila Zoo once, the peacock who died years after he did, but when you read about it in the back of the Philippine Inquirer you wept anyway, like you were a little girl again, opening the door for your Tito1 whose mustache hung like an apology over his lips.

Did you really come this far to just eat vegetables? A piece of arugula tumbles through your lips, the bitter taste stinging a part of your mouth you didn’t know was there. When you were growing up your mother would spoon the palengke’s2 day of vegetables, fresh fish, and rice onto your richer friends’ plates like she was embarrassed about it. The two of you would sit together watching commercials for those bright red sausages you couldn’t afford on the little box of a television she finally bought with her sari-sari3 store money because Dad said he wouldn’t pay to let that Marcos4 propaganda bullshit into your home. And then your mother would say, hush, don’t talk like that, and cross herself, and Dad would say, well what can I say that’s worse than what I’m already doing. And everyone knew this was true. And then she would shrink­—you envy that she’s lost twenty pounds since all that happened—into a little bundle by the television, neatly folded like a towel at the foot of the bed. Now it was 2001 and those sausages were cheaper than anything, and vegetables pricey as schoolbooks, and every Filipino was stuffing themselves with meat enough for the nation to go up a couple pant sizes, and now that you think about it you wonder if that’s what’s making these 7,107 islands sink deeper into the sea. And this is how you find yourself, here in this upscale Makati café, pushing arugula away with your fork, trying not to think about the bathroom scale this morning. Your fiancée Jhun-Jhun noisily siphons another square from his 12-ounce steak.

You met Jhun-Jhun at the law firm. He is confident, bright, with a big smile that unveils both his top and bottom teeth. He’s the boss’s kid, a few years younger than you, and devastatingly ripped like a page from a banned book. So at first you say, that’s sweet, baby, but I can’t. And of course that all gives way, something about that ease in his walk, the puppyishness he brings to all things. Although sometimes his intellect was wanting, you needed that lightness when you were curled over your casework for the umpteenth hour, folded up like a towel at the foot of the bed.

Jhun-Jhun isn’t his real name, of course. It’s a play on Junior, and his real name is Jia, which you believe is Chinese for auspicious, but you’ve forgotten and you’re too embarrassed at this point to ask. No one in the Philippines goes by their real names, and this wasn’t something you knew was abnormal until you left the country the first time, when the firm took you on that trip to Japan on your last year of law school. That trip you swore you wouldn’t go because you knew it’d sway you. And then you went anyways, because it would make your mother sad if you didn’t, your mother who just wanted you to enjoy life, she never put any pressure on you like everyone else’s, she prayed you would have what she didn’t. She would always say, anak5, you do the best you can and you hope it’s enough. On the trip, you wonder if maybe this is the best you can do. While you are downing the hundred-dollar sake you do not think about your father’s father, the guerilla the Japanese waterboarded and chained up to die in a city plaza.6

And so the money was in your mouth. So too was the hundred-dollar Nigiri baring its belly of uncooked fish. You were not wondering why was it so expensive not to cook fish when you signed your full name on the dotted line. Your real name that your father would call you even after everybody decided your name was Cora. In all its long-ness, you think the signature looks like it belongs to somebody else.

Cora, baby? says Jhun-Jhun, bringing you down from your reverie. His eyes are inquisitive and reflect the yellow of the hipster string lights that hang behind you. He wants to leave and buy the TV now, before there’s sobrang7 traffic and you’re stuck on EDSA8 the next hour and a half. You wonder how it is you caught such a good one. You almost forgot, you were here because you’re buying this new thing called a flat screen, which looked like a regular television if you pulled the ends really hard. How nice it’ll look in our new home.

That’s my girl. He scruffs your hair. Always thinking so much!

The department store is in the basement of a mall. Despite malls never having windows so you can never tell the time of day, somehow your body could always sense whether you were above ground or not. You hate basements, you wonder why this is, and decide there must be some evolutionary basis to it as Jhun-Jhun totes you into the place, gesticulating about a basketball game you did not watch, and smiling a good afternoon at all the young, well made-up clerks who eye you with envy for having reeled in such a prime specimen. You know they are wondering after the years on your own body, wondering after how to poach him. They chatter affectionately at Jhun-Jhun, and he never hears the flirtation ringing in their gills.

Downstairs, sir, the clerks giggle, B2.

And so down, down the escalator you go.

You’re safe in the electronics section, where the clerks are all men, thank God, and the place is still enormous. Like schools of fish, the fluorescent paradise teems with mestizo9 families cruising confused children in strollers, Koreans smart in blue and white, and aging matriarchs with blue uniformed house help in tow like an early funeral procession. This mall is frequented by foreigners, which is how you know it’s high-end and the bathrooms have toilet paper. The store is full of electronics nobody needed invented, the kind that are bought with excitement, used one or twice, then dispossessed into clutter cabinets for the lone task of collecting dust. You want to beeline to where the televisions rise out of the white tile like obelisks – their silky screens flash mangroves stretching out of emerald seas, hot air balloons climbing, and chefs tossing rainbow salads in slow-motion – but Jhun-Jhun must stop at all the shiny things, like a magpie assembling a nest.

Back when the money was not in your mouth, would you stop at the flowers too? Hell, are there still flowers in Manila? To be honest, you never looked anymore, you were always in the car. You should ask your mom, it’s been a while since you called her. Somehow you lost time for all this, and reaching back you forget what a flower actually smells like, and the only scent that comes to mind is the French eau de toilette you bought last week. But you do remember that your father’s favorite flowers were the bougainvillea, those brusque flowers that bloom without caution, and the fuchsia ones outside your house were flourishing that day your Tito arrived with his hat in his hands. What news. You didn’t even know they had taken Dad in for questioning. Now you were lucky just to be getting back his body. Because of his activism, you were used to him being away weeks at a time, but when you heard he was gone forever something like an earthquake came, you cried and fell onto everything and the little box of a television came crashing down onto the tiles. You buried him with his journals, you swore you would finish what he started, and it wasn’t until the money was in your mouth that all your words got swallowed back into a place deeper than a grave.

That one looks fine, honey. This is your every reply to the parade of near-identical flat screens you’re judging today. But Jhun-Jhun is thorough, Jhun-Jhun wants to live without regrets, Jhun-Jhun will pry the clerk until the poor guy pulls out every last television pamphlet and half of his hair.

You are at the store an hour, and then two. Sitting onthe fold-up chair watching the televisions spin through their umpteenth cycle of otherworldly video clips, you feel your stomach grumble and do nothing. You chew on some arugula you find between your molars. It tastes like dust.

You know what, Cora, I don’t care anymore, says Jhun-Jhun, who’s finally lowered them down to two. They’re both great. Just please, pick one.

A peacock flashes onto the screen of the one to the left. It walks across the stage, brilliant color arced like the inside of a flame. And then it is gone, replaced by a white girl with whiter teeth, writhing in sand.

That one, you say. That one is best.

That evening a typhoon of people storm EDSA. You wish you were out there with them, you hate Errap10 as much as anybody, but there are so many people that you’re afraid to open the SUV door. The mosaic of hundreds of thousands of yearning faces wave like a flag against the car window. Maybe change will really happen this time, maybe your fathers will finally sleep easy beneath softening soil, and maybe all that money will be spat out. You hold all these glorious thoughts up against the light, turning them slowly in your hands. Yet the glistening images and thundering chants of the people, which thrum and rise and dip as if coming in and out of water, somehow make you feel like mourning. All this movement happening outside of you. You sit in the car for hours, glacially pushing against the masses, the brand-new television sleeping like a baby in the backseat.

8 short for Epifanio de los Santos Avenue: Manila’s most important highway, which is unendingly inundated with traffic and was the marching ground of two peaceful revolutions against corrupt presidencies. The first, the People Power revolution in 1986, ousted Marcos after decades of repression and disappearances. The second, in 2001, is my first memory. I remember not understanding what was going on, feeling a thousand feet tall sitting on my father’s sturdy shoulders, looking across an endless sea of heads, all of us chanting, ERRAP RESIGN

10 nickname for Joseph Estrada, president who was removed from office by the EDSA II movement