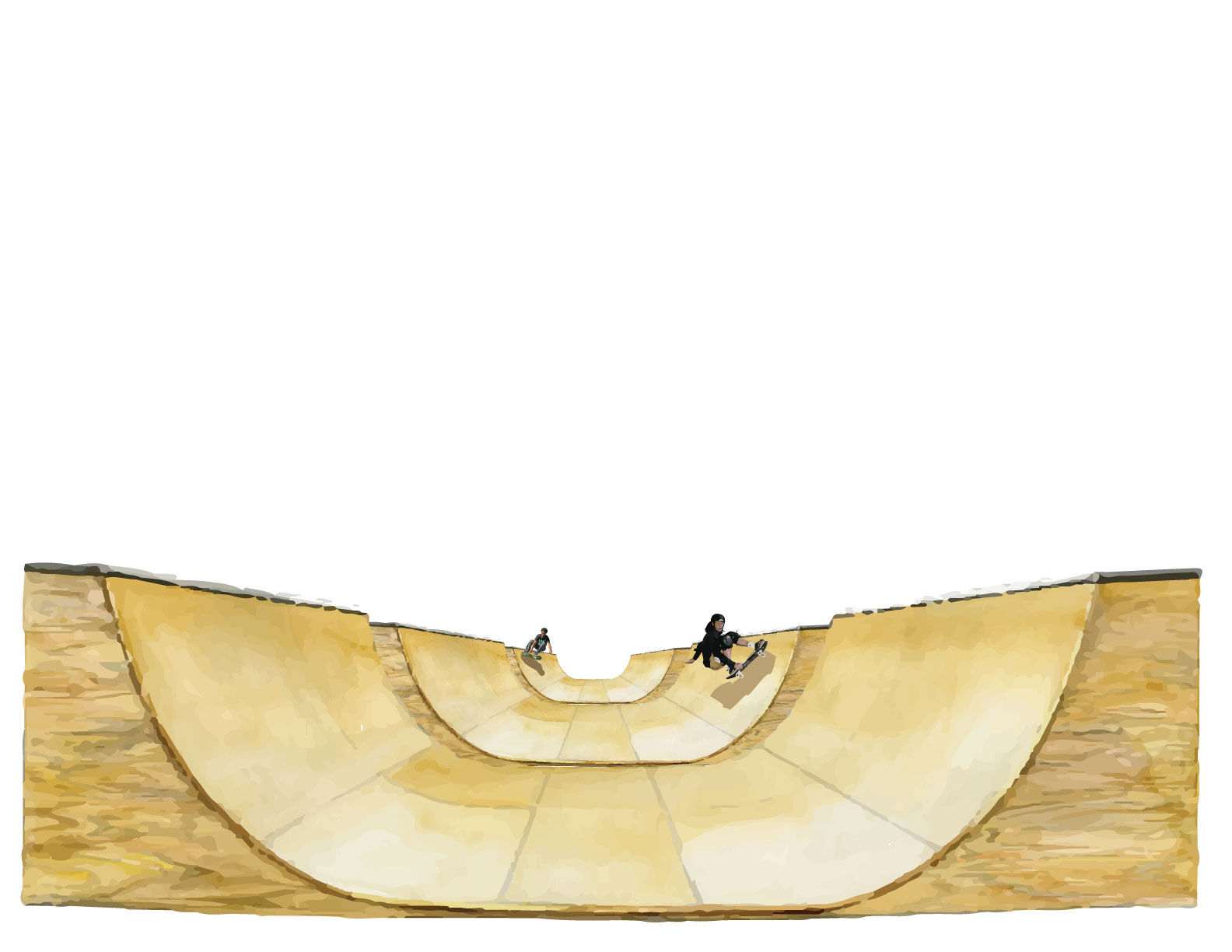 MOMENTS AFTER 18-YEAR-OLD Nyjah Huston clinched the 2012 Street League Skateboarding Super Crown, cameras swarmed. Lil Wayne rushed through the stadium stands to be the first to congratulate him, and two women in stilettos exhibited a larger than life credit card that read “$200,000.” A smirking Huston fidgeted a little bit next to a disappointed Paul Rodriguez as Rob Dyrdek commanded the microphone, “Alright Ladies and Gentlemen, this man has won $200,000. He has won a beautiful gold watch and ring filled with diamonds. He has won a Chevy Sonic. Ladies and Gentlemen, your 2012 Street League Skateboarding champion, the one and only, Nyjah Huston!” A soft, uncertain applause fills the stadium. “Lift that trophy up man. Give it up for this kid!” he added, trying to sell the crowd the allure of the prizes as much as he was trying to celebrate Huston’s victory.

ROB DYRDEK WANTS TO GIVE professional skateboarding big salaries, celebrity status, and prime-time glamour. In 2010, Dyrdek, a former professional skater, MTV celebrity (known for his MTV shows “Rob & Big,” “Fantasy Factory,” and “Ridiculousness”), and skateboard entrepreneur launched what he suggests is the NBA of skateboarding—Street League Skateboarding. SLS came about as a revision to the system of skateboard competitions that remained roughly unchanged since “jam” style competitions and the birth of the sport.

Jam style competitions use a score-keeping method aptly referred to as “expert impression evaluation” (EIE): People who know a lot about skateboarding watch each individual skateboarder do a 5-10 minute run and decide, at the end, which one they liked the best. As a result, the jam style competition sets few concrete guidelines for the types of tricks that garner the most points. The judges at one competition might opt for skaters that attempt more difficult maneuvers while falling a couple times; other judges might favor those who consistently land less-technically complicated tricks. Without concrete guidelines for what type of skateboarding will be most generously rewarded, competitors create their runs with more creative autonomy. Rather than perform tricks to please the judges, they do whatever compels them personally. According to Dan Bostick, president of World Cup Skateboarding (the company that formerly ran scoring for the X-Games), the jam model/EIE system creates a contest environment, in which the judging “doesn’t dictate the skating; the skating dictates the judging.”

Jam style competitions are the product of a video-centric skateboard industry, in which professional skateboarders do not depend on competitions to earn a living. Instead, skateboarders make videos for skate companies who sponsor them. If the video is good, the skateboarder gains respect among other skateboarders, and his/her name gains social currency. The company then sells decks, shoes, clothes, wheels, etc. with their sponsored skateboarder’s name attached to it, and the skateboarder receives a monthly check. The salary one earns from these sponsorships varies based on the success of the company. On average, sponsors will pay skaters $1000 a month (many skaters hold multiple company sponsorships), and some more successful companies will pay up to $5000 a month. Compare this to the average NBA player, who, according to Forbes, made $5.15 million dollars in 2012, and it is easy to see why skateboarding has never been viewed as a means of getting rich. The jam style competitions did not need to have broad, mainstream appeal, because no one depended on them to bolster up a professional skateboard career.

Rob Dyrdek knew that jam style competitions were contests geared toward an insular skateboarder community. He saw that these competitions lacked the quantitative indicators (e.g. goals scored, yards gained, pins bowled over) which hold the uninformed spectator’s attention. What is compelling about watching the jam style competition is being able to see whose run most aptly and impressively combines elements of past styles of skateboarding with something new. To distinguish the different styles of skateboarding in a meaningful way is to pay close attention to the skateboard industry and skateboard history. In order to create the NBA of skateboarding, Dyrdek needed to dumb down the competition, to make skateboarding compelling, without the expectation that its audience have a deep literacy in skateboard history and culture. He needed to make a competition with, as he puts it, “a live, real-time, trick-by-trick, run-by-run scoring system that enables that ‘buzzer beater’ type of experience that keeps our fans and viewers riveted to the action.”

IN 2009, DYRDEK'S COMPANY,  Dyrdek Enterprises, developed the Instant Scoring eXperience ISX), According to ESPN’s Keith Hamm, ISX “breaks away from skateboarding’s traditional ‘overall impression’ judging technique and focuses instead on trick-by-trick performance.” This system turns the jam style EIE system on its head, creating a competitive dynamic in which the skateboarders and the audience are aware of each competitor’s position on the leaderboard from start to finish. As Dyrdek puts it, ISX is “instant scoring that makes every single trick count... at all times you’ll be at the edge of your seat, watching your favorite skateboarder chase all over the leader board for a $150,000 first prize.” The result: everyone can understand the suspense of the game as it unfolds. With early success, the scoring system was recently adopted by the X Games.

Scott Pfaff, Dyrdek’s cousin and employee, spearheaded the effort to transition the subjective value of a skateboard trick into a uniform system of quantitative evaluation. To do this, he first determined that every skateboard trick derives from some combination of 50 basic maneuvers. He then determined three normative categories for these fifty maneuvers: easiest maneuvers earning 1.0–3.0 points; intermediate maneuvers earning 2.0–4.0 points; and difficult maneuvers earning 3.0–5.0 points. Therefore if a kickflip (flipping the board) is in the intermediate category, and if a backside shuv-it (rotating the board 180 degrees) is in the easy category, then a varial flip (backside shuv-it + kickflip = varial flip) will earn an aggregate score ranging from 3.0 to 7.0 points, depending on the subjective evaluation of the panel of judges. The systems allow for a small degree of style or “x-factor” to play a roll in the scoring process. As Pfaff puts it, “we’re not saying, directly, a 360 flip is worth 4.5 points, no matter how well you [did it]. It ranges.” The score limit for any individual trick is 10.0 points. Even though it is conceivable that a competitor could perform a trick with a sum of basic maneuvers totaling more than 10.0, the categories that Pfaff designed make earning any decimal above a 9.0 a near-miraculous occasion.

It became clear what separates Street League Skateboarding from older skateboard competitions in the last two tricks of the 2012 Super Crown. Paul Rodriguez was 7.3 points from knocking Nyjah Huston out of first place on the leader board. Huston had one opportunity to land a trick and increase his lead over Rodriguez. He attempted a cab backside lipslide to fakie down a large rail, and caught the board with his weight too far over the rail. His board shot out from under him, and he slammed face-first into the ground. Suddenly the entire stadium stood up. The stadium announcer started in, “Can he do it? Can Paul Rodriguez clinch the championship? Put your hands together!” in a voice that echoed across the space. The fans screamed and jittered, watching a noticeably shaken Rodriguez pacing back and forth, praying into his Nike SB hat. He ran toward a massive stair set, board in hand, and the crowd exploded with excitement.

In that moment, it didn’t matter if you didn’t know what a “cab backside lipslide to fakie” was—all you needed to know in order to share in the excitement was that Nyjah’s fall made his position on the leaderboard beatable. Paul Rodriguez had the chance to come back and win the championship from behind—a classic buzzer beater moment that skateboarding had never seen on such a large scale. In this moment, Dyrdek demonstrated that one could make skateboard competitions compelling to a mainstream audience. The key to his success: quantifying a subjective performance art in an intuitive, user-friendly format.

STREET LEAGUE SKATEBOARDING is only getting bigger. Now that Street League has formed a partnership with the X Games, the upcoming 2013 season will be a 7-stop world tour—the first ever world tour of a professional skateboarding competition. The total prize purse for the 2014 season has also increased from $1.2 million to over $2 million—the largest prize purse in the history of the sport.

Street League Skateboarding has created a new A-list image of the skateboard pro. No one captured that image better than Nyjah Huston in the October 2013 release of GQ’s “How to Rip the Runway”—a video and series of photos depicting Huston wearing GQ’s “six favorite fall runway looks” while demonstrating his three favorite tricks at the Venice Beach Skate park in California. One picture shows Huston doing a kickflip while wearing a fashion-forward fedora, stylish gray jacket, and black handbag (in hand). Underneath the images are quotes from Huston: “I think its true that I’ve won more prize money than anyone in skateboarding,” and “I have a Mercedes CLS 63 AMG and an Audi R8; I end up getting into street races.” This is a far cry from the torn pants, shoelace-for-belt skate rat, selling spare skate decks to get gas funds for the next skate trip. Cody McEntire, a professional skateboarder who does not participate in Street League competitions, sums it up in an article for ESPN: “[Street League’s] the elitist one percent of skateboarders. There’s those 20 guys making all the money and getting all the crazy sponsors and then there’s the other 99 percent of us who are scraping by trying to find an apartment that’s under $300 per person.”

THOUGHT STREET LEAGUE SKATEBOARDING has resonated with mainstream audiences, many people in the skateboard community find the ISX system of quantification problematic. A larger proportion of points are rewarded based on the complexity of trick than the style in which the trick was performed. It is far from universally agreed within the skateboarding community that the technicality of a trick is (i.e. the number of basic maneuvers that a trick compounds) is what makes good skateboarding good.

Dyrdek claims that the ISX system “rewards competitors for taking risks and going big.” But the system does not reward taking risks, it rewards taking specific risks—like adding an extra flip or a rotation to a trick. It doesn’t reward skateboarders who can make simple tricks just as awe-inspiring as complicated ones. It does not leave room for thinking outside of the box—like incorporating old school tricks (e.g. plants, grabs, etc) into a contemporary, technical trick crazed style. The ISX scoring system incentivizes a sloppy looking big spin flip over a smoothly executed kickflip, simply because the big spin flip combines the aggregate points of more basic maneuvers. The less beautifully executed trick in this scenario effectively receives three scores—one for each basic component—whereas the masterfully executed kickflip, a “basic” maneuver,” receives only one.

STREET LEAGUE SKATEBOARDING is a bittersweet evolution. For the first time in the history of the sport, there are professional skateboarders getting paid well for the lifetime they’ve devoted to honing their skills. What’s more, In the last ten years, skateboarders have gained cultural visibility that SLS is only increases. But the monetary incentives for skateboarding that are finally surfacing strictly incentivize a generic form of skateboarding. In the way that there are often unspoken allusions to past architectural movements embedded into the structure of new buildings, jam style contest runs are filled with allusions to an abundant history of skateboard videos and past contests. The ISX scoring systems limits the ability of skateboarders to react to past styles of skateboarding. It mandates that competitors be good in a specific way.

ELI PITEGOFF B’15 was recently adopted by the X Games.