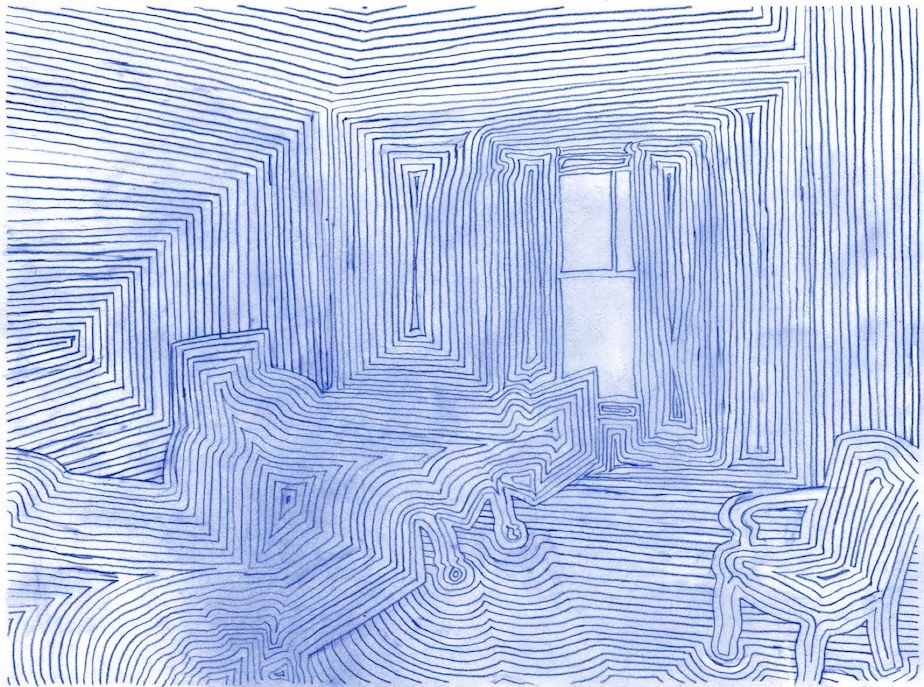 Bingo night is every Thursday. I will never go. The game is a purgatory for squares and number counters, and worse yet it is a game without stakes. The grand prize could be a can of beans and yet it always draws a crowd. The retired accountant lays his head to rest, exhausted from looking for tax breaks on his card, while the old gambler lifts his head, wipes the saliva from his card and cashes out.

Maybe because I hate bingo, they sentenced me to the burgundy corduroy chair in the corner of the other room. The pale green walls amplifies the delusional wins in the game room. From here I can see the other members, the checkered floors, and the sunset beaming onto the dust in the home. It’s important to get out of my room. Clarice comes by everyday and asks, “How are you feeling today?” I wish she would use her elegant stride for something other than surprising the shit out of me. She is wearing a new perfume. The lavender alone would have suited her, but the man was thinking of another woman when he asked the perfumist to add rose. Why she insists on asking me questions she will never get answers to, I will never know. Maybe it's because she knows I hate bingo.

On the dusty orange steps of the Cholula Cathedral, I saw the guitar being played for the first time. This is where I spent my childhood, or more precisely, where I herded its skeletal memories. The guitarist would move between frets with quick ease. Passerbys left black shells in front of him, their rocky jagged exterior hid a milky translucent interior. He plucked at the strings making each note sting and cry before moving his fingers to the next position. To him of course, these were not just notes. He doesn’t remember how he knows what to play. He could never tell you about chords or harmonies, just as I could never explain breathing.

All I have is me and my chair in front of the television. There are chairs in this room and people sit and leave. After Clarice takes care of me my eyes follow her and stop at the camera in the corner of the room. What do these people think we are capable of besides withering? Staring into the camera, I can feel my own gaze coming from the television. My eyes dart back to the television. Golf.

I best understood Alice in the alley next to a churreria. In those nights while the breeze settled, the heat diffused the aroma of chocolate and cinnamon that would stick to the alley road after hours. After hours, the gnats dive into the cobblestone to feast, the lucky ones struggled to escape with legs and wings missing, others were preserved in the worn-down chocolate. Her parents were expats, only recognizable in her anglo O’s. She held her parent’s identities close. And even knowing that she is from the place that she knows, she had doubts. She enjoyed guiding me through the night, renaming the streets in ways that made me forget. She leaned on the golden wall behind her and allowed the night to settle on her face. She pulled a page from her journal, and I saw part of a title, “Muerte y mem-” she sprinkled tobacco on the rest of writing before I could read it. The ember at the end of the cigarette illuminated each word before turning them to ash.

Three-quarters: Hombres—This all feels so familiar.

And yet, my feet are planted. My body has decided

to stay a little longer.

Half: Golondrinas—The breeze whispered between

the cobblestones and past our ankles.

My stomach meets my throat, and I can only hope

that her gaze ends at skin.

like a balloon. I stumbled both in step and in words.

The cigarette was the last thing in-between us.

I have friends here. I have James, Pedro and Janice. They mull around the room and they talk to me. None of us know where the others came from. We sit in the same ward where the cracks in the tiles are a little wider. They are surprisingly good company. James and Janice are always together. They look related, which is easy to imagine: Mother pops out two and gives them the same name. Pedro has been here longer and is lonelier than most people here. His stories trail off into tangents, and uneasy with their conclusions are cut short. I can’t help but think he is the smartest person in the home. He tells different stories about his eye, revealing what he thinks of you on the given day. From my seat, I once saw him put an imaginary ball in the hand of a guest at the end of a story; the guest squeezed the ball and let the fluid drip between his knuckles, horrified he could only let go a faint scream. Pedro never stopped being a kid, and a little bit of play helps run the place.

Foolishly, I forgot what the fortune teller on the bank of the river told us while we were in our 20s, but years later, our hairs started to gray and Alice started waking up pleading, “The kids, the kids." She looked over, slightly embarrassed, knowing my awful sleep habits had woken me up before she had said anything. She sat up, accidentally pulling the sheets up, uncovering her upright feet. She looked at her toes like a lighthouse keeper searching for a rowboat in fog. Alice massaged her forehead with the pads of her fingers before saying anything.

“I’m not quite sure what’s tying me to this world anymore.” Her words settled. Smoothing out the sheets, she looked up and back down, “There are these faces that I see, ones I recognize but can’t pin names to. It feels like im giving myself up to them, but I see now I don’t know who they are or how to give them what they want.”

“Well, what are they asking of you?”

“Well, these faces they look at me and they offer themselves. But when I look at them, they drone on at the other faces. And the droning—it only gets louder the more I look.”

That night, Alice dreamt of a pigeon in an iron cage, whose jutting head kept its eyes fixed on her. A lifetime of showing strength meant she could only be fragile in abstractions.

It was a blessing that my room came decorated. I think collecting new things to put in the room would’ve been hard to go through again. I put my collection of shells on the mantle and a vase on the nightstand. Later, I moved the vase by the floor near the crack on the wall, hoping it would grow out of it. And the crack does grow, but never as fast as I would like. I hear voices on the other side of the wall, voices I have heard. I hear my friends here, Jane and Jameson and Paul, and if I listen a little longer there is Alice.

And even while dying, Alice consoled me. She spent her last days trying to find out what my life was like before her, which she would use to prepare me for what life would be after her. She pinched her amber necklace when she asked me, as if lamenting the butterfly that she had a jeweler cutout swearing it was trying to escape. The butterfly had all of eternity to escape, yet it waited for Alice, both of them understanding the nature of the transaction. I told her that as a boy my body fell asleep before my mind did and I spent the nights counting, not by choice, the numbers always showed up under my eyelids. “It’s because your parents taught you how to read with a phonebook,” she teased, knowing that it was the only way to make me comfortable, and knowing that the numbers would eventually return. Even as her head dropped to her right shoulder, she had a plan. Nothing left to understand.

Clarice says it’s time for me to sleep, but I don't want to. She tells me that I need to sleep if I want to feel better. Life here moves at a boring but agreeable pace. But when the ceiling fan and lights are turned off and I fall asleep,  I feel like a thrashing newborn experiencing light and sound for the first time. A dream could seat me in front of Alice or my friends or my grandfather, but it's up to me to speak. And dream on top of dream, I am further from a word. And yet tonight, a freshness moves over my tongue, ridding it of its lingering staleness. I feel the starchy peaks and creases of my sheets, gently poke into the sides of my chests. The tips of my fingers and big toes tingle, feeling the breeze just once more. The numbers trickle back, and I remember what to say.