The World as Picture, Exhibition, and Target 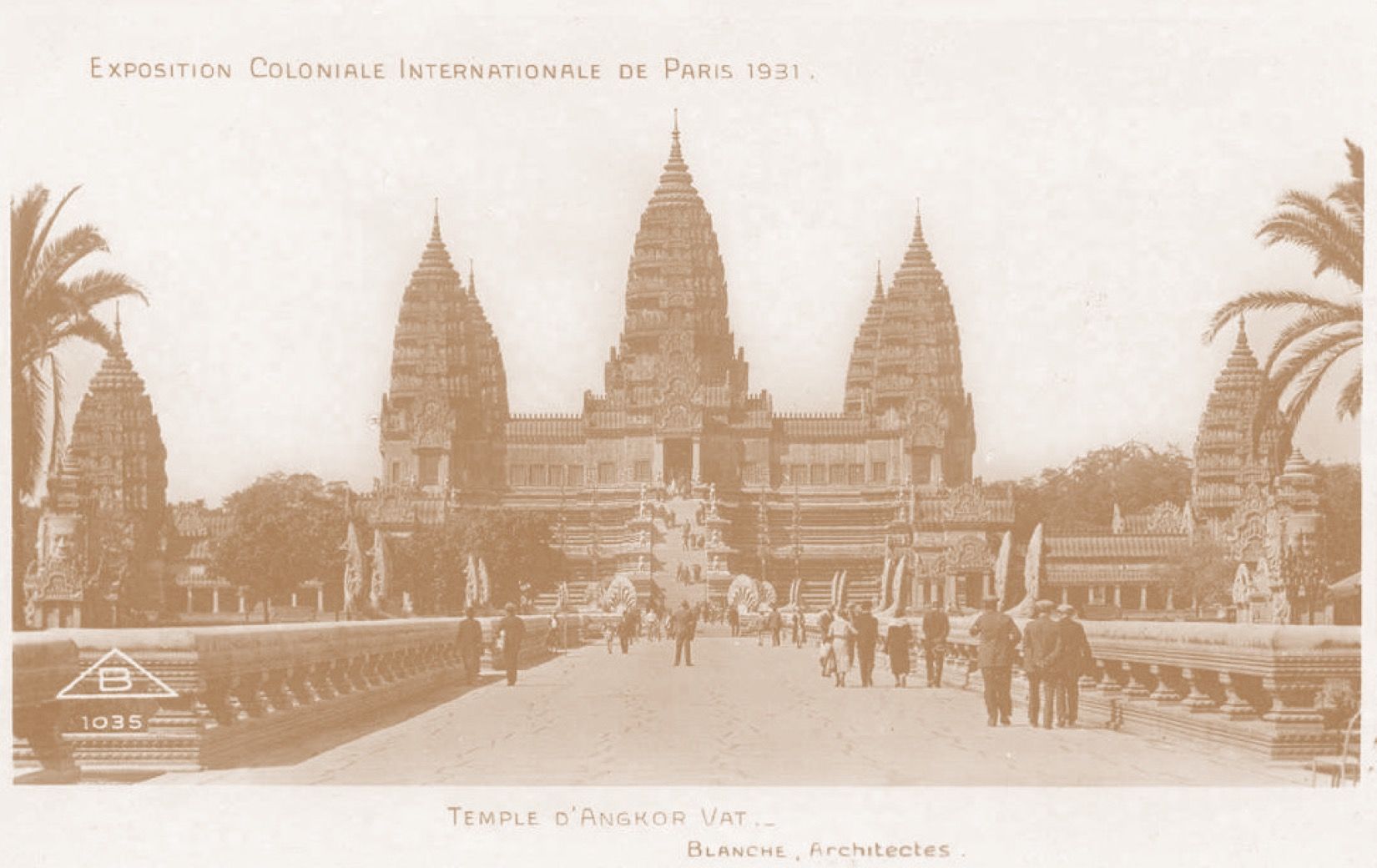 Postcard for the Angkor Wat Pavilion, 1931

I want to talk about some phenomena in the violence against Southeast Asian peoples, both historically and today, and the modes of this violence. I’ve been trying to parse it through the framework of three big theories, to see what it is that decolonial action on behalf of the West must look like. Let me take you through them, and then maybe we can get somewhere useful. Three probably seems excessive, but bear with me.

But first I’m going to cheat and add one more, because we need to get the World Picture out of the way in order to get to the other stuff. So, we’ll start there. Ironically enough, it was Martin Heidegger, a Nazi, who first theorized the world-as-picture in the 1930s. The world picture described the way people were coming to see the world itself as a plan, an image, a map. Here, the weapons take the form of the representation, an optical tool. Political theorist Timothy Mitchell was the first to apply the notion of the World Picture to colonialism. Under colonialism, Mitchell wrote, the world is not just a picture, but an exhibit to be displayed and, most importantly, known, learned, and ordered. This is what we might understand as the colonial optic, where the weapon is total vision and taxonomy of the colonized. Later, the postcolonial cultural critic Rey Chow recognized that something was missing in this line of theory—namely, that today, when the world is a picture, it’s because the world is a target. In this formulation, the World Picture is seen in order to be destroyed. Martinican writer, philosopher, and literary critic Édouard Glissant’s intervention into mainstream work on the colonial optic formulates a politics of opacity as the oppressed’s weapon of resistance. This opacity serves as the ability to remain illegible to hegemonic power, which reduces and delimits the identity, history, and being of the ‘Other.’ While today Glissant’s theory might read as a simplification of the colonizer-colonized dynamic, I hope his framework might still prove fruitful in attending to this relationship. Through the lens of these thinkers, the ramifications of seeing the world as exhibit and target congeal prominently at Angkor Wat, one of the most famous sites in Southeast Asia. It is through this archeological epicenter that we might find some understanding about a way out of these paradigms and what opacity has to offer. This is by no means a final answer, nor a claim to authority, but perhaps it can be of use.

Angkor Wat has occupied the West’s Orientalist imaginary for hundreds of years now. As a nationalist monument, religious site, and archeological object, the site has today come to represent the Kingdom of Cambodia, and even sits at the center of the Cambodian flag. In the late 1800s and early 1900s, Angkor Wat became the gem of French colonialism and is a locus of activity between the colonizing West (France, and later the United States) and the colonized East (as part of Indochina). Cambodia has its own pavilion in each of the Exposition Coloniales France hosted, and it is the 1931 Exposition Coloniale that is of particular interest.

For the exposition, French architects built a massive replica of Angkor Wat in the center of Paris, using molds taken from the original site to build the exterior and featuring “authentic” Cambodian dancers and Cambodian nationals paid to work at the pavilion. The replica was hailed as the real thing, a reality that matched the original site, such that visitors need not visit Cambodia to see Angkor Wat. While previous versions of the Angkor Wat pavilion had involved massive leaps of design on behalf of the French architects, this pavilion was supposedly true to form. In fact, visitors to other French ‘Oriental’ pavilions, made similarly, often said that even after visiting the real ‘Orient,’ it was the French pavilions that were most authentically ‘Oriental.’ The pavilion was intended to educate the masses about Cambodians and the archeological value of the site, a didactic but entertaining version of the museum meant to more actively draw visitors from all socioeconomic classes and expose them to cultured knowledge. And while the pavilion was certainly not true to form, it was this act, the making of the pavilion, and the sincere belief of the vision created, that is so relevant. This act was not just to map and formally illustrate the world through the colonial exhibition, but to produce the picture of the world in order to exhibit it, display it, and learn it. The world was rendered legible not just as an image, but as a taxonomy, with the West ordering races and colonies along vectors of civilization. 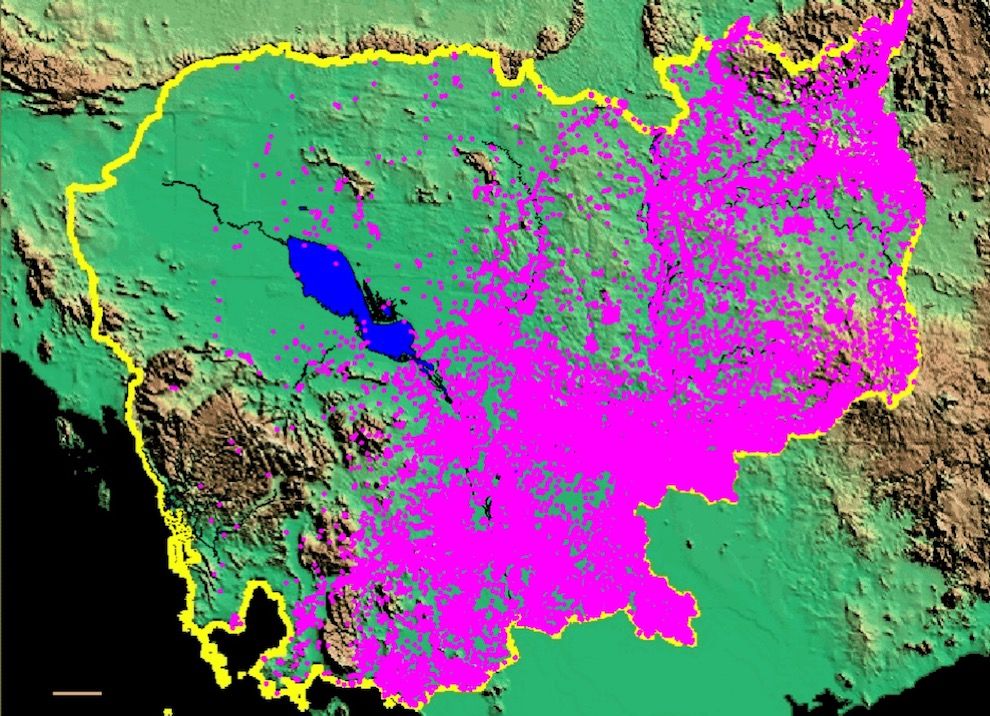 Locations of US Bombing Points During Cambodia Campaign

In this way, the colonized subject was not just made totally visible as a picture and displayed object, but totally knowable through a museological production of knowledge by way of reduction and classification. The French excelled at this. In fact, through their art historical practice, they constructed first the categorization of “Indochina”—i.e. Indian-Chinese land—and then a homogenous, non-Cambodian Khmer ethnic identity as the builders of Angkor Wat. Some French went so far as to claim that these Khmer people were Aryans, and thus European relatives. In all cases, the French were sure that these Khmer people were dead, vanished, and long gone, while the new Cambodian people were inherently inferior to both the Khmers and Europeans. It was this history that France sought to teach at its colonial exhibit. The world-as-exhibit paradigm, then, is helpful for understanding not only colonial France’s view of Cambodia and its people as something to display but also how, as France enacted the categorical work of the museum exhibit, it produced a colonial schema and an entirely reductive, incorrect account of the Cambodian and Khmer people. Of course, the ethnically heterogeneous Cambodian people, counter to this narrative, are descendants of the equally heterogeneous Khmer builders.

Using the World Picture in the study of colonialism is a clarifying framework, but under neo-colonialism, it is Rey Chow’s world-as-target that proves most helpful for unpacking the continued cultural and physical violence that plays out within Cambodia and Angkor Wat. In looking at this violence today, it is urgent to remember that while colonial France’s violence often manifested in the outright massacring, displacement, and imprisonment of Cambodian peoples, it was also symbolic: France’s museological practices determined who an authentic Khmer and Cambodian was, erasing heritage and identities. Angkor Wat was one of France’s great tools for determining authenticity, and France even named itself the legitimate heir to the Angkor civilization. To this end, at the 1931 Exposition, the French projected the colors of the French flag onto the replica, claiming the site as theirs—a form of violence itself. But after Cambodia gained independence from France’s colonial power, Western violence toward the East took myriad forms. From 1965 to 1973, the United States engaged in President Nixon’s goal of a “massive bombing campaign.” During this Cambodia Campaign, the US Air Force dropped at least 500,000 tons of bombs throughout the nation, killing as many as 150,000 people.

Later, when the U.S. offered supply and diplomatic support to the Khmer Rouge, the communist guerilla party seeking freedom from the very conditions the West’s capitalist colonialism produced in Vietnam, Cambodia, and Laos (previously Indochina), the West would enable genocide. Today, there are as many as 8-10 million landmines left in Cambodian soil from the conflict—landmines that were either produced in the West or modeled from US designs. The framework of the world-as-target illuminates President Nixon’s Cambodia Campaign in many ways. The visual ephemera of the violence make clear that the war was waged through the production of representations—maps, helicopter footage, and visual data. These images overexposed and rendered visible the hidden indigenous resistance, just as the world-as-picture and exhibit did for the “lost” and “undiscovered” Khmer civilization and the Orientalized Cambodia. The neo-colonial optic, then, is perhaps best summarized by the words of a former United States Under Secretary of Defense, “Once you can see the target, you can expect to destroy it.” In this same vein, Henry Kissinger encouraged the troops of the Cambodia Campaign to put “anything that flies on anything that moves.”

This hypervisibility, this lack of opacity, also emerges from the phenomenon of drone footage in Cambodia, where archeologists use the weapons of Western domination to continue to see and know Cambodia. A recent talk at the Joukowsky Institute for Archeology at Brown University by Iconem, a French startup founded in 2013, spoke on the “role for new technologies in the protection of cultural heritage.” They pride themselves on “photorealistic 3D models” for archeological research. They are one of many Western research groups that uses drones to surveil Angkor Wat, a site now regulated by Paris-based UNESCO. Likewise, American and European tourists in Cambodia occasionally (illegally) fly drones over the landmark, often posting their videos on YouTube. These models for knowledge production and categorization blur the line between wartime and peacetime representation and technology.

With this in mind, it is unsurprising that the first area studies program was the Far Eastern Association, founded toward the end of World War II in the United States and remade as the Association for Asian Studies in the 1950s. In this way, the institutions of Western power continue to supervise and render Cambodia totally knowable, examinable, and seeable under a rubric of area studies. In the neo-colonial world of drones, landmines, area studies, and Western hegemonic archeological practices, we have to ask, who benefits from this hypervisibility, the Iconem models, and the West’s otherizing study of the East? What are the stakes in demanding total visibility from Cambodia? In the blurring of the boundaries of war, how can the West see the ‘Other’ outside of the target field? Here, Glissant saves the day. The subversion of the world-as-exhibit and target lies, at least partly, in opacity. These Western paradigms seek to make the ‘Other’ totally visible and knowable. Opacity, illegibility, and the agency of the ‘Other’ to determine visual fields offer a potential method of conceptualizing the relation between colonial powers and the colonized without resorting to the inequality embedded in knowledge production. What opacity can the West cede and respect? What illegibility can Cambodia, and the East, generally, attain? How can Western academia treat the study of previously-colonized subjects without reducing, generalizing, or controlling peoples and histories? Glissant’s opacity might take the form of new pedagogy, policy, or museum methodology, but this notion of opacity should serve as touchstone for the Western regime. Without this, we should be aware of the violent consequences. In Cambodia, the weapons are already there.

ALEXIS GORDON ‘20 wants you to question more things they’re showing at the Joukowsky.