Rhode Island politicians keep their constituents in the dark 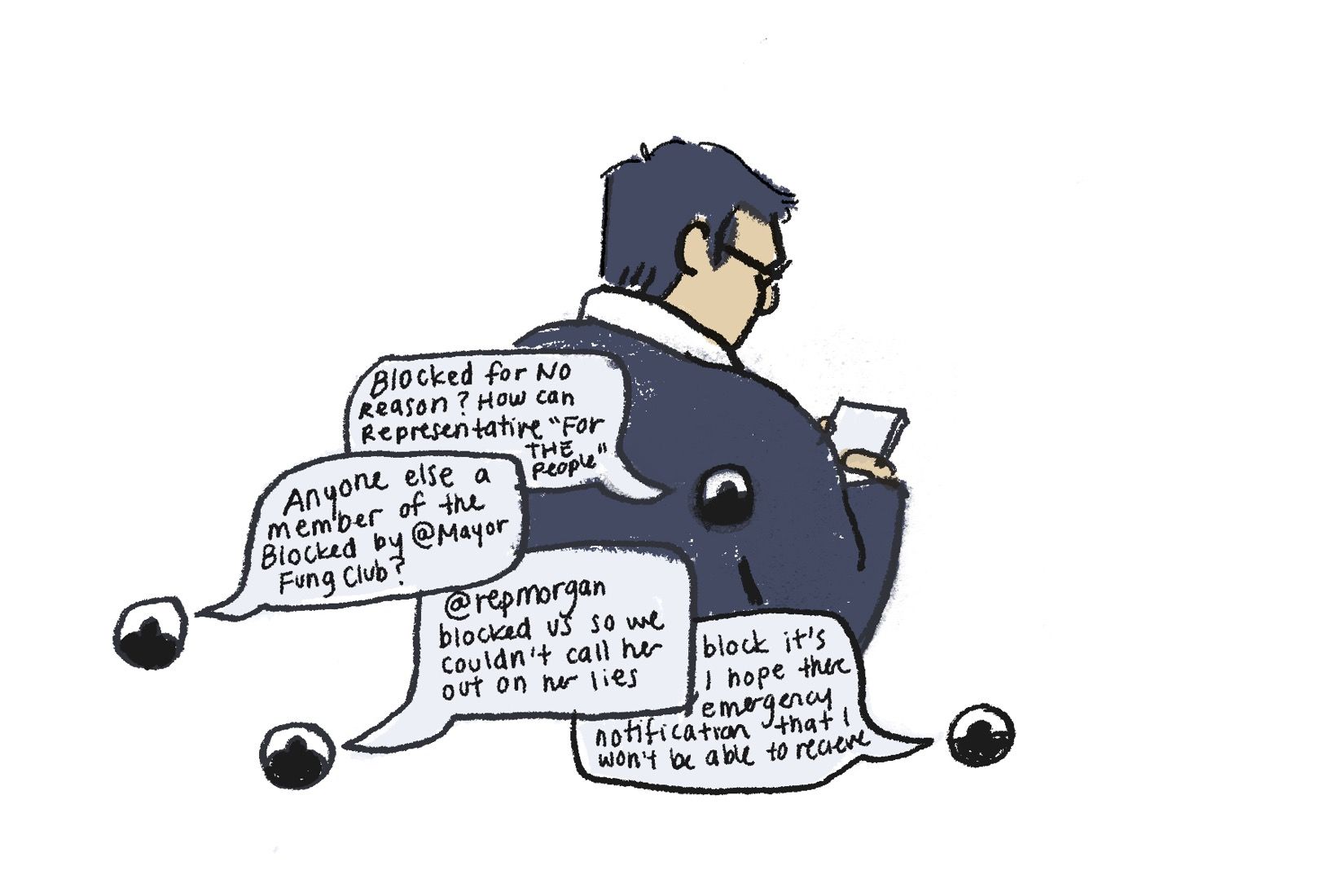 Rhode Island politicians often struggle to keep their reputations clean, so maybe it isn’t surprising that when officials take to Twitter, they don’t always follow best practices. RI Problems (@RIProbz), a Twitter account with 125,000 followers, started a thread on February 16 to ask how its followers would describe Rhode Island in one word. The most common response: “Corruption.”

For Lindsay Crudele, a native of Cranston, Rhode Island, interacting with her hometown mayor on Twitter was riddled with contradictions. She had questions about what Allan Fung, the mayor of Cranston and also the Republican candidate for governor in the 2018 race, envisioned for health care policy in the state. Although Crudele now lives in Boston, her parents still live in Cranston, and her mother has multiple sclerosis. “I wanted to know what I might expect for my mother should he become the governor,” Crudele told the Independent. Crudele is a seasoned Twitter user. She works as a digital consultant, and has helped governments, including the City of Boston, develop their social media presence. So, she decided to tweet at Fung (@MayorFung)—a very active Twitter user—numerous times during his campaign to ask about his health care policy. She got no response, even as Fung engaged with numerous other constituents on the site, answering questions about trash removal and posting emergency weather updates.

In September, Crudele saw that Fung had tweeted criticizing Governor Gina Raimondo for a TV campaign ad asserting that Cranston was in distress under Fung’s leadership. Clapping back, Fung wrote that the footage mistakenly showed Providence streets. The tweet reminded Crudele of one of Fung’s own campaign mishaps during his 2014 run for governor, when one of his advertisements featured a diner in Ohio, not Rhode Island. “I wrote back to him [on Twitter], and I said, ‘Well let us know when you get back from Ohio,’ and that’s the moment I was blocked,” she said. “I was ignored for months, but when I made that joke I was blocked.” Crudele could no longer retweet or reply to Fung’s tweets, and was barred from seeing all of the public information he was sharing on his timeline.

Crudele found her experience was not unique: others on Twitter, including Cranston residents, said they had been blocked by Fung’s account. Well-versed in local government, she decided to file a public records request to see the list of accounts that Fung was blocking. Cranston’s city solicitor, Chris Rawson, replied to her in an email: “This Twitter account is not associated with the City of Cranston.” Even though Fung has roughly 8,000 Twitter followers and regularly posts about his actions as mayor, along with weather and traffic-related updates, Rawson claimed that Fung’s account was not associated in any official capacity with the city. Some city governments in Rhode Island, like Pawtucket, have official Twitter accounts that post regular updates about the town. Cranston, however, does not have an official account, so many updates about local governance happen on Fung’s Twitter instead. “It’s not a private account if he’s having all these conversations on social media, if he’s sharing all sorts of more robust communication around weather, and discussing business development,” Crudele said.

Crudele continued to tweet about Fung blocking her on her personal account, and the story was picked up by local outlets, including the Providence Journal. Fung’s campaign spokesperson, Andrew Augustus, told the ProJo in September that Fung had blocked 24 people on Twitter, all engaged in “either profanity or nuisance posting.” Fast forward four months and although Fung has taken out the official mayoral title from his Twitter handle, changing it from @MayorFung to @AllanFungRI, Crudele is still blocked. Blocking, according to Crudele, “is an amazing way to silence your opponents. He didn’t have to have a back-and-forth conversation with me, but I should be able to see publicly posted information.”

It seems almost gratuitous to point out that the sense of Rhode Island as a small state where everyone knows each other is replicated on Twitter, as local politicians and journalists are easily reachable on the site. Rhode Islanders often tweet at their representatives about traffic and infrastructure problems, and receive information about how to accurately report their issues. Twitter is an increasingly important site of engagement between citizens and their government, as people turn there first when looking for an immediate response from their elected officials.

The political conversation on Rhode Island Twitter also includes direct confrontations between elected officials. In January, Democratic State Representative from Providence Marcia Ranglin-Vassell tweeted about education reform and involved herself in a Twitter back-and-forth with Republican Representative from North Smithfield  Brian Newberry about what qualifies someone to speak on issues around education. She ultimately tweeted at him to “Stop trolling and trying to cyber bully me with your racist attitudes.”

When politicians block constituents, this also means preventing them from from taking part in debates over local politics that only happen on Twitter, and from seeing their stances on issues they may not release formal press releases about. Free speech issues arise when politicians claim their accounts are their private property (as they ran the same accounts, sometimes with the same handles, as private citizens), even as they engage in political discussion on the site. The legal question of whether becoming a politician fundamentally changes the nature of one’s speech on Twitter has not been resolved.

Fung is not the only Rhode Island politician known to block people on Twitter. Democratic US Representative David Cicilline has blocked users, although his spokesman told the ProJo that the option is reserved only for cases of repeated harassment. One of the Rhode Islanders who claims to be blocked by Cicilline, @NewportLost, has a Twitter bio full of references to right-wing conspiracy theories: “#America1st Illegal isn't a race, it is a crime. #1A Do your own research. -FACTS OVER FEELZ- #Immigrate to #Assimilate - #NoMoreWar - #wg1wga #QAnon.”

Former Rhode Island House Minority Leader Patricia Morgan blocked a group of firefighters on Twitter, after introducing and passing legislation that dealt with the bankruptcy of the Central Coventry Fire District (CCFD) budget in 2016. Firefighters tweeted at her criticizing her leadership, referencing the CCFD debacle, even when tweeting about other actions her office was undertaking. The Twitter account for the East Greenwich Fire Fighters Association (@IAFFLocal3328), one town over from Coventry, criticized her for her poor leadership numerous times, calling out her alleged “union breaking” practices. In July 2016, they wrote, “@repmorgan blocked us so we couldn't call her out on her lies.” Other firefighters who spoke out against Morgan’s policy alleged that she blocked them as well.

While dealing with critics, or even trolls, on Twitter can make the site a less pleasant experience, other Rhode Island politicians have made it their social media policy to not block or mute anyone, including Governor Gina Raimondo and Providence Mayor Jorge Elorza. Emily Crowell, Elorza’s chief of communications and senior adviser, told the ProJo that the issue “has not come up, nor is it our policy to block users.”

There is yet to be a settled legal standard for whether politicians can block people. In May 2018, Judge Naomi Reice Buchwald of the US District Court for the Southern District of New York ruled that it is unconstitutional for the President (@RealDonaldTrump) to block people from his account. In her decision, Buchwald wrote that Twitter is a “designated public forum” since the President uses it for government speech, and that he is violating people’s First Amendment rights by blocking them for critical tweets. Trump has filed an appeal in the Second Circuit; his lawyers wrote that Trump’s account is his private property, which he uses “not to provide a platform for public discussion, but to disseminate his own views to the world.”

While Buchwald’s decision is under appeal, politicians around the country continue to block thousands of Twitter users, including their constituents. A ProPublica report in 2017 found that governors and elected officials had blocked around 1,300 Twitter users. Some of those blocked by elected officials have since filed cases with the ACLU, including in Kentucky against Governor Matt Bevin (who blocked over 600 people on Twitter, according to a ProPublica report), in Ohio against State Senator Joe Uecker, and in Alabama against Secretary of State John Merrill. The verdicts have been mixed—no one has yet defined the difference between personal and official government accounts.

What does seem clearer, at least according to the Rhode Island ACLU, is that government agencies’ official Twitter accounts should not be able to block people. In October 2017, “smokin blunts” (@bluntz401), an anonymous account with a yellow smiley face giving the middle finger as a profile photo, first posted on Twitter about being blocked by the Rhode Island Department of Transportation: “Transparency in @rigov doesn't exist especially at @RIDOTNews.” He continued to post criticism of RIDOT, even though they could no longer see his tweets. He wrote about the department’s failure to take care of Rhode Island roads and bridges, as well as about a RIDOT worker seen smoking a cigarette while shoveling a storm drain, among other complaints.

In October 2018, Steven Brown, the executive director of the Rhode Island ACLU, sent a letter to the Rhode Island Department of Transportation, demanding that “smokin blunts” be unblocked from @RIDOTNews. Brown wrote that since the department posts updates with essential information on Twitter, they do not have “the authority to censor or otherwise block individuals from access to, or participation in, this forum because it disagrees with the viewpoints they express.” Brown added, “The ability of constituents to be able to express their views to both elected and appointed officials is crucial in a democratic society, and Twitter, Facebook and other social media are simply 21st Century [sic] ways of doing that.”

Brown’s letter emphasized that RIDOT’s account is necessarily a government account because it’s speaking for an official government agency, not any individual politician, so information shared to its Twitter must be publicly accessible. Now unblocked, “smokin blunts” is back to regular criticism of RIDOT. On January 20, he wrote: “Hey @RIDOTNews instead of stupid slogans and bad commercials why don't you #DoYourJob and put some salt down 295 is like a skating rink.”

Twitter is not known, of course, for always being a place of insightful discourse—it’s difficult to fit intelligent commentary in the 140-turned-280 character limit. And Rhode Island Twitter, like all of Twitter, is not necessarily the most civil place. But people blocked from elected representatives’ Twitter accounts lose the opportunity participate in larger discussions with politicians and fellow citizens, even if officials consider them to be “nuisance posting.” Twitter can be a place of accessible communication with politicians—people have an opportunity to feel like they’re hearing directly from (or being heard by) their elected representatives, instead of just leaving a note with an assistant after a phone call. On Twitter, people have the opportunity to share their political grievances in a public forum, potentially drawing more attention to the issue they’re raising and growing consensus amongst their neighbors and people from around the state.

Crudele isn’t sure Fung will ever unblock her from his Twitter account, though she has found a go-around to see his tweets. She started an account, @MayorOfCranston, that mirrors Fung’s account by automatically reposting everything he tweets. It currently has 12 followers — that is, 12 more people who will never be excluded from seeing posts and interacting with the powers that be.

ALINA KULMAN B’21 wants more people to get on Rhody Twitter.