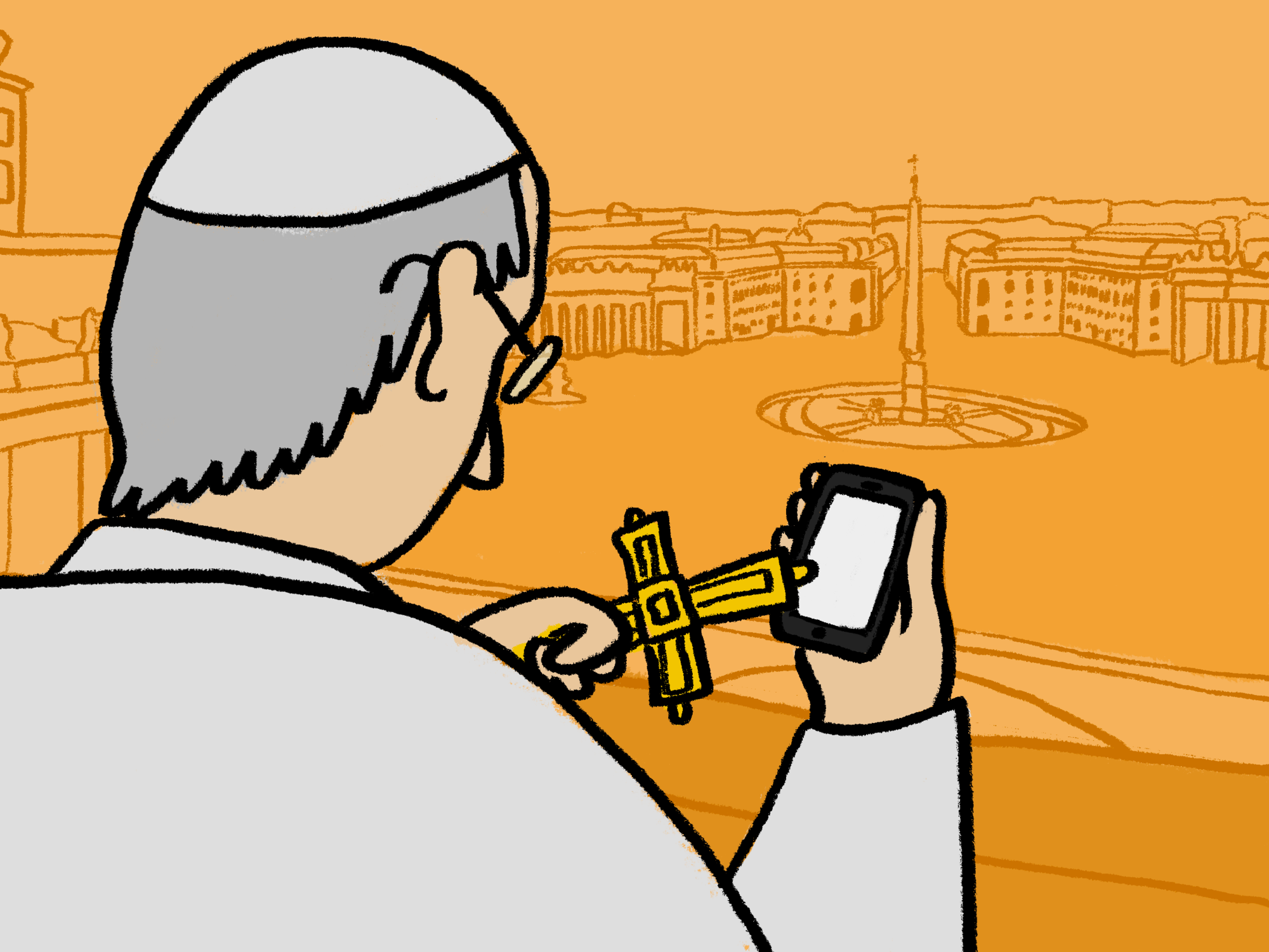 Pope Francis wants you to know he’s not a regular pope, he’s a cool pope. With the recent 2019 World Youth Day festival in Panama, the Pope put his newfound fluency with internet culture on display when he announced the launch of his app and website Click To Pray, where users can click a button to show that they’ve said the prayer the Pope posts each day. People can also make accounts to post their own prayers, and anyone can click to say they’ve prayed for them.

The Pope also filled his speech at the festival with hip references—demonstrating that he has, in fact, used a computer before. Francis emphasized to the crowd of Catholic teens that life is not just “in the cloud and waiting to be downloaded,” nor is it simply “a new app to be discovered.”

The references didn’t stop there. The Virgin Mary, by choosing to give birth to Jesus, was the first influencer: “the ‘influencer’ of God.” Later in his speech, Francis proclaimed that “to be an ‘influencer’ in the twenty-first century is to be guardians of roots, guardians of all that prevents our life from dissipating and evaporating into nothingness.” Clearly, he is yet to see either Fyre Festival documentary (but preferably Fyre: The Greatest Party that Never Happened, available on Netflix which, unlike the Hulu doc, did not allegedly pay Fyre Festival founder and actual sociopath Billy McFarland $250,000 for an interview), to learn how influencers successfully directed their millions of followers to go an island where there wasn’t food, water, or shelter for them. Or maybe Francis has seen the doc and was just reminded of Mark 6:7, where Jesus gives his 12 disciples some helpful travel advice to take “no bread, no bag, no money in your belts” on their journeys.

The Pope has previously admitted that the Catholic Church has a youth problem. At a speech in Estonia in September, he said that the myriad of sexual abuse scandals revealed over the last 30-odd years have “put off” young people, who see the Church as “bothersome and irritating.” Francis has continually positioned himself as one of the (if not the) most liberal popes in papal history; he has emphasized the need to respect gay people, to help refugees, and to aid the poor. One hopes, however, that in his attempts to reform the Church and reach out to young people, to create the ideal “communicative, accessible, joyful and interactive community” that he described in his Estonia speech, the Pope will do more than just tell teens that all that’s necessary for salvation is the click a button. (Although the Independent does admit to going on ClickToPray.org and clicking for “the girl who was caught smoking at school”).

One Key to Bind Them All

In the latest development of a real-life financial heist conspiracy, this past week, a blow was dealt to users of a Canadian cryptocurrency trading website called Quadriga. Back in December, Chief Operating Officer Gerald Cotten, founder and holder of the keys to the platform’s digital ledgers, was on a philanthropic trip to Jaipur, India. While there, he died suddenly of complications related to Crohn’s disease. Since the website’s announcement of Cotten’s death in January, account holders have been scrambling to figure out how to get access to what amounts to over $190 million worth of bitcoin and other digital currency. British Columbia Securities Commission (BCSC) announced on February 6 that users would not be offered recompense from the state. Without that password, which went to the grave with its caretaker, those accounts are permanently frozen.

Quadriga’s website is understandably apologetic, outlining tentative next steps. “Gerry took sole responsibility for the handling of funds for QuadrigaCX and as such no one other than him can access the coins in the cold wallets," it explains. This is bad news for Quadriga’s 115,000 users because without that protection, their accounts are stuck in a system so heavily protected that authorized hackers employed in an attempt to breach the platform had “little success.” Attempts to locate the password in Cotten’s scattered notes and messages have also been unsuccessful.

If this story sounds bizarre, the crypto community agrees. Trading with cryptocurrency is not supposed to hinge on one person’s access; the point of a decentralized currency is that one person can’t hide transaction histories or restrict records. In Quadriga’s case, however, account information was regularly moved into ‘cold storage,’ (meaning an offline bitcoin account, following in the crypto community’s tradition of naming things as if they were physical) and the only access key was the missing password. As this saga has unfolded, an internet theory has grown in popularit: it suspects that owing to his fishy financial operating system and Quadriga’s instability, Cotten is in fact alive (and very rich) in India.

Supporting this theory is the fact that the area around Jaipur in India where Cotten went on his trip to found an orphanage has a reputation for its ‘Fake Death’ mafia. Allegedly, westerners seeking to reap insurance benefits frequent Rajasthan to obtain a fully legal death certificates from doctors for just an online application and cash transfer. According to Quadriga’s announcement, Cotten spent two weeks in a local hospital, during which time he signed a will leaving all his assets to his wife Jennifer and their two Chihuahua dogs. Though Cotten’s effects were put in order fairly concretely, the much sought after password is nowhere to be found, adding fuel to the idea that Cotten may be on the lam with two million dollars from the cold accounts.

Cotten’s colleagues have conflicting theories of their own. While many consider his death strange in light of his financial circumstances, friend and Vancouver business associate Fredrick Heartline has a firm faith that Cotten’s passwords will come to light posthumously. Faith appears a theme in the lives of cryptocurrency advocates—it would seem that in the world of cryptocurrency, even something as real as death itself relies on mutual belief. The Independent sends its best to the floundering account holders of Quadriga, and humbly submits that they try ‘password123.’