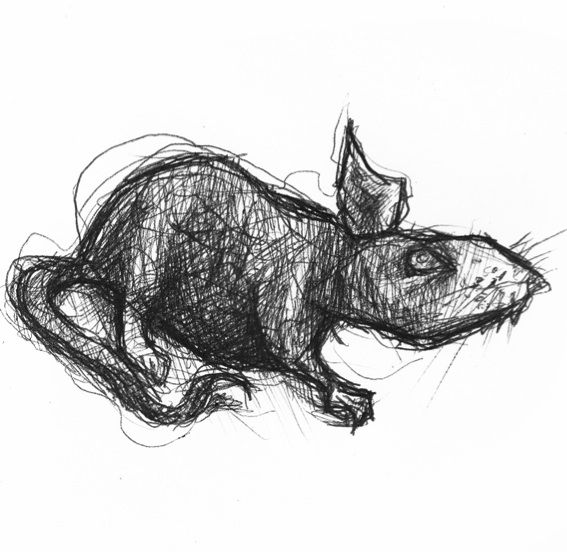 Careful—they’re in the floorboards and behind the walls and there are billions of them. Just turn on the shower: the head will fall off, and instead of water, lit’rally thousands of cockroaches will pour out. That was gross, right? Here’s the week in pests. Enjoy.

THE DANGER OF RATS IN SCIENCE

This time around, the rat-maze was special.

This rat-maze, you see, was divided into two sides. At the end of one side were treats and at the end of the other were bores. So: on one side of the maze there were Oreos, or, alternatively, cocaine and morphine; on the other side there were rice cakes, or, alternatively, saline solution. Above the whole mess stood associate professor Joseph Schroeder and some undergraduates. The bunch of ‘em were conducting an intensive experiment on Rat Pleasure at Connecticut College. Preliminary findings were released last week.

Here’s what they found: the rats, obviously, tended to choose the pleasurable sides of the maze. They spent much more time looking for Oreos and drugs than they did for rice cakes and saline. Not only that: among the pleasure-seeking rats, brain scans indicated that eating Oreos was actually more pleasurable than doing drugs. Rats prefer cookies to cocaine.

It’s no surprise that rats are hedonists, that they have no scruples, and that they love snacks.

And Schroeder thinks the implications could be serious. He told CNN that his rat-based discovery  “may help us to understand why individuals who have trouble controlling their food intake, especially when food options are limited to high fat/sugar options, are more susceptible to obesity.”

Sure—this study might help us understand how junk food and drugs affect the brain in similar ways. And this could be really useful, for doctors and for patients alike.

But it seems that there could also be a much bigger risk at play here. It seems that if this experiment is really to help us understand the joy of junk food, we have to begin to understand the world through the prism of Rat Pleasure.

“Oh, alright,” readers of Schroeder’s findings are meant to respond. “Oreos are a little more pleasurable than cocaine is for a rat. Based on my knowledge of rodents, I now know how pleasurable Oreos are.”

Unfortunately, this rat-centric approach is all too common in science. Most experiments with rats as their subjects demand that we understand the world from the perspective of rats. Want to know how human addiction works? Think like a rat. Want to learn how hereditary diseases are passed on? Look at rat genes. Want to try for a new vaccine? You must cure the rats first.

Rats are coopting experiments for their own purposes. Yes: rodents are infiltrating the Temple of Knowledge, and pleasure is their reward. This is the way to a speedy descent. So please, press the “Emergency Stop” button on the elevator. I would like to get out before we reach the throne hall of the Mole King. –SPE

ya no puede caminar

I don’t know when I first learned that tune, but I am pretty sure I had known it a few years before figuring out what la cucaracha was.  Cockroaches scare the shit out of me; it’s just how I was raised. A cockroach losing its ability to walk would be cause for celebration in my house.  Turns out I shouldn’t have been singing.

Cockroach farming is booming in China.  Periplaneta Americana, the American cockroach is the breed of choice. In 2010, a pound of the dry critters sold for 2$; today, it goes for $20.  Plus the overhead is very low, as Wang Fuming, China’s roach kingpin, told the Los Angeles Times,  “I thought about raising pigs, but with traditional farming, the profit margins are very low. With cockroaches, you can invest 20 yuan and get back 150 yuan.”  The dry cockroaches are ground into a powder and used in traditional Chinese medicine as a cure for bone Tuberculosis, baldness, AIDS, cancer, and as a vitamin supplement.  Cosmetics companies are the second largest buyer, using the bugs as cheap protein source and for material coating cockroach wings.

As it turns out, not all American cockroaches are the same. The National Cockroach Project, run by Rockefeller University in New York has been enlisting “high school students and other citizen scientists” to help collect specimens for DNA Barcoding. Their findings have shown that the cockroaches I grew up killing on the Upper West Side are genetically distinct from those on the Upper East Side and those on Roosevelt Island. So far, despite the title, they have not received enough samples to make inferences on the genetic diversity of cockroaches across the country.  Mark Stoekle, lead Scientist of the project told the National Geographic, “The diversity was a surprise to us, and the fact that they’re not just all mixed together—it’s not a random assortment. So they must be staying close to home, and they have their own neighborhoods.” –JJ

Politics: In 2009, Crow ran a failed campaign to become the president of New Zealand’s Veterans Association, the RSA.

Innovation: Crow pioneered the Boobs on Bikes promotion event in Auckland, which, true to nomenclature, is a parade of topless female cyclists.

Perhaps the only common thread uniting these activities is their middling success. But Crow has never been one to get discouraged. This week, he was back in the headlines, this time taking his never-say-die attitude and penchant for horizontality on an underwater killing spree. With a renewed sense of purpose, Crow has decided to tackle the problem of an invasive marine species in New Zealand, promising to eradicate the Mediterranean Fanworm.

The fanworm is a marine animal that looks something like a Truffula Tree from Dr. Seuss’s The Lorax. Its central orange stalk can grow up to 40 cm, with fronds that fan out from its top. It reproduces at an astounding rate, and will readily grow on every available surface. Its presence has become a nuisance for watersport enthusiasts throughout New Zealand, who have to been forced into perpetual scraping to remove the fanworm from boats and boogie boards.

Believe it or not, Crow has a master’s degree in marine biology from the University of Auckland. He claims to take issues of the marine ecosystem very seriously. “This is hugely exciting to me and it will be fantastic for the ecosystem if we can kill the Mediterranean fanworm,” he proclaimed in a recent press release. He is certainly more alarmed by the fanworm’s presence than the rest of the scientific community, which seems more inclined towards observation rather than action.

Armed with an ultrasonic anti-fouling machine, which shatters the insides of the aquatic pests and prevents them from latching onto docks, wakeboards, and other marine life, he believes this technology to be the ideal and ethical solution. Swimming around the harbor with his new purchase, Crow has every intention of blasting the ecosystem to safety.

Crow has sworn that he will not rest until he has killed each and every last one of these fanworms. If all else fails—and, given his track record and the lack of scientific evidence surrounding the efficacy of this technology, this is abundantly possible—at least he’ll be able to add a new title to his resume.