We never thought the day would come either. At the Indy, we pride ourselves on maintaining the kind of long-form, Leftist, far-too-dense-to-get-through print journalism you can rarely find these days. But with print media dying, even the most morally upright publications have to resort to the dreaded medium of our age: the Listicle.

Every week, to compensate for the fact that almost our entire staff is from out of state, we pound back a iced coffee at the Dunkin on Gano Street while we scour Rhode Island Twitter for the references and stories any real local should know. With the year coming to a close, we proudly present the 10 best Rhode Island tweets of the year. 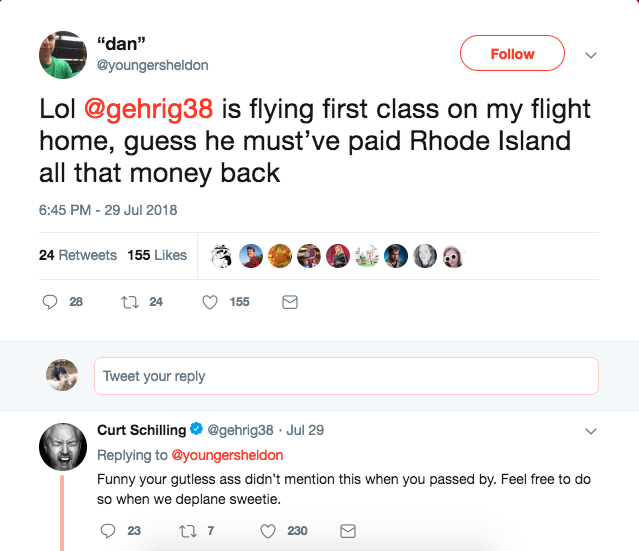 No Best of RI article (sorry, listicle) is complete without a reference to former Red Sox pitcher Curt Schilling’s failed video game venture, 38 Studios, which made its home in Downtown Providence for no less than a year in 2011 before going bankrupt and putting the state out millions of dollars. A so-called “dan” came at Schilling’s neck on Twitter (as we hope any proud Rhode Islander would), @ing the ketchup-sock-footed pitcher to call him a “gutless ass” and a “#keyboardcowboy” before threatening “dan” with a video of a guy beating a car with a baseball bat. Another strike against Curt for making the case, deep in the reply thread, that “Men should pee in mens rooms.” And as if this wasn’t enough, US Representative from Rhode Island, David Cicilline threw his hat in the ring last week, tweeting “Curt, you still owe my state $75 million. Maybe worry about that before you go after @Ocasio2018 again…” 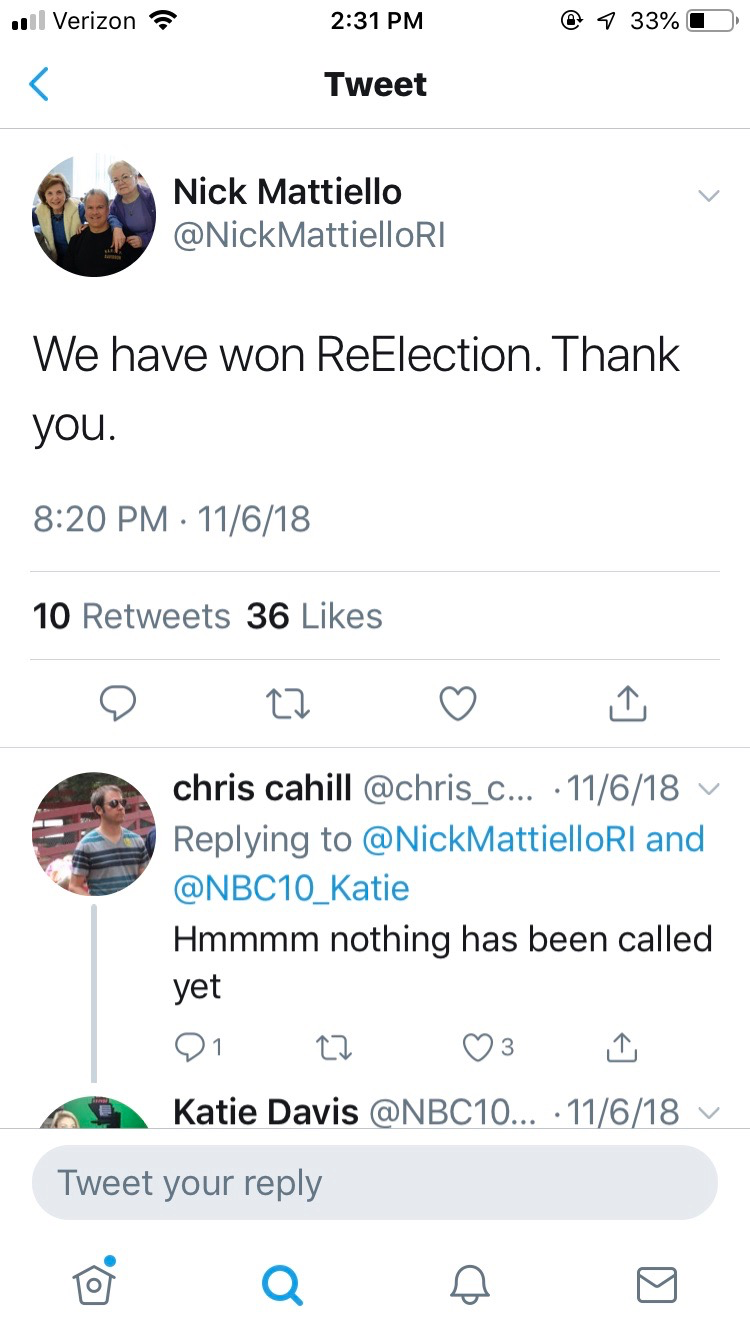 Nicholas Mattiello, Speaker of the Rhode Island House of Representatives—famous for his bullying of other members of the House, who he often cardons off to punishment seats—announced victory in November via his personal Twitter account, twenty minutes after polls closed, and hours before any races had been called. Channeling his inner Trump (and not for the first time….) Mattiello got creative with his capitalizations, and the Indy’s style guide has been updated to reflect regional dialect: re-election will be spelled “ReElection” in your favorite alt-weekly from here on out. Bonus points to State Rep. Moira Walsh for her tweet calling out Mattiello’s antics (and for tweeting out an Indy article one time—respect). 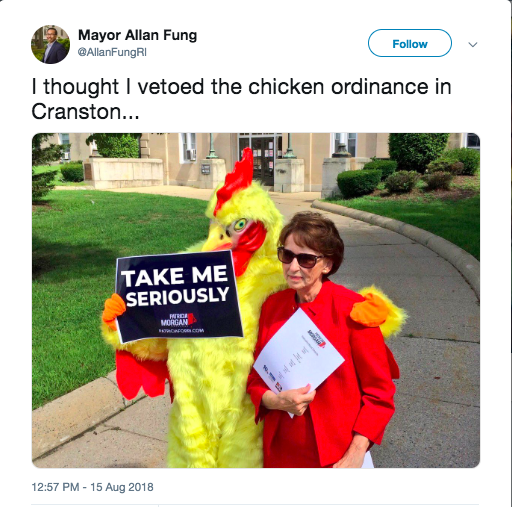 Late this summer, Republican House Minority Leader and then-challenger in the Republican primary for governor Patricia Morgan showed up at Cranston Town Hall with a man in a chicken suit, both calling out Fung for not debating her and maintaining the distinct optimism that anyone was waiting for a Republican debate to begin with. (She also delivered what looks like an off-brand KFC bucket to the ProJo, which Katherine Gregg dubbed “objets du campaign” as if she was revving up her fellow Marxists to take down de Gaulle). Fung retorted with this (honestly? impressive!) Photoshopped version, which many would be forgiven for taking as the real deal. Rather than gas up Fung’s meme-y take on fake news, we would actually prefer to read it this way. There’s a certain pathos in this image of Pat and a knock-off Sesame Street character, standing by the roadside, holding a cry for help. Personally, we’d like a version as big as Joe Trillo’s sign! 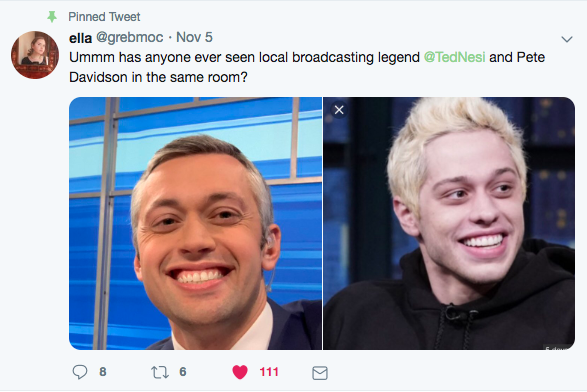 Dare we toot our own horn here and give #4 to the Indy’s own Ella Comberg for finding WPRI anchor Ted Nesi’s separated-at-birth twin in Pete Davidson. There can’t possibly be more than 111 people on RI Twitter, so it’s safe to say Ella got every like she could. Probably gonna be pinned for a few years. (Also, we wouldn’t be mad if Ted bleached his hair).

We’ve got to give it up to #NoLNGinPVD for putting words to what all of  RI media—especially the ProJo’s Katherine Gregg—have been thinking all year: Gina’s press team needs to can it. Even us lowly Indy editors faced the wrath of Emily, the Governor’s Press Secretary, over the summer when she posted a screenshot of Science and Tech editor/Matt Brown stan Julia Rock’s tweet, just to stir the pot, apparently. (Fun fact #1: Julia saw Emily at Red Stripe the day after this tweet and shot her a VERY dirty look.) Honestly Emily, don’t @ us either. And don’t even get us started with #TeamGina’s Mike Raia and his hockey crap….if we had a Bottom 10 listicle, it’s safe to the Governor’s office would make up about half of it, including this contender for #1 lamest RI political dig of the year. 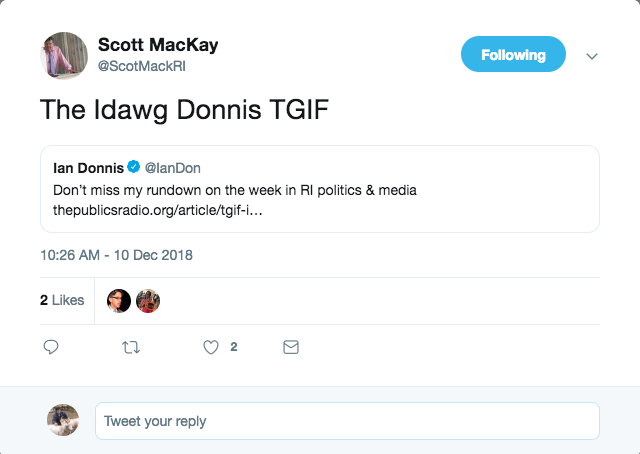 Honestly, we’re not sure what is really going on in this tweet, but for the absolute weirdness of it alone, The Public’s Radio’s Scott MacKay gets #6. We like to imagine Scott dapping up his colleague Ian Donnis when he gets to the studio early each morning with a friendly, “TGIF Idawg, amirite?” There was, in fact, an internal Indy email thread about this tweet, which included a quip about as nonsensical as MacKay’s original tweet: “It’s the Idawg, and he’s barking!” As strange as this tweet is, we’re just grateful MacKay took a break from his constant (and Trump-like) third-person references to himself. (We’re still supporting The Public’s Radio in their end-of-year pledge drive, though). 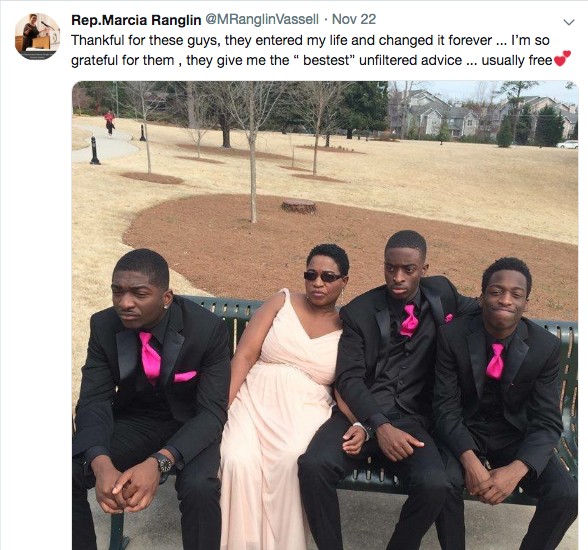 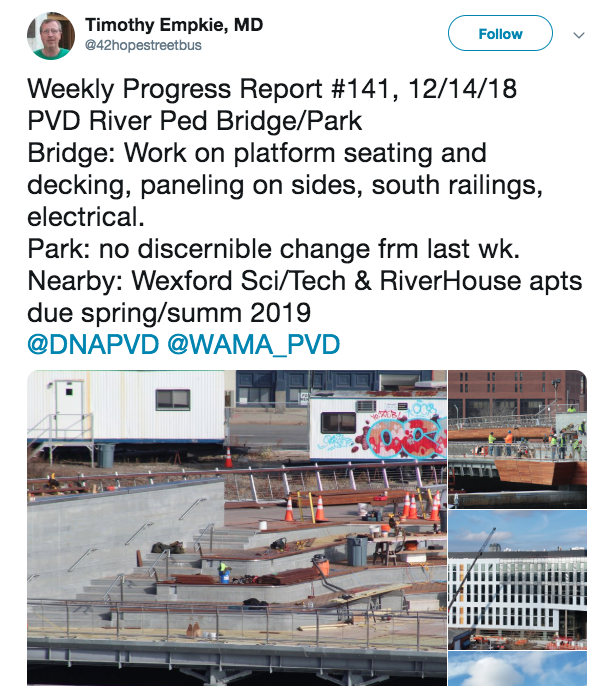 Jokes aside, some folks on RI Twitter are actually mature enough to post reasonable, helpful content. Okay, just kidding, there’s only one, and that’s Dr. Timothy Empkie, “MD” (I guess he’s a doctor or something?) for his weekly drone shots of construction on the pedestrian bridge. Fun fact #2: one time while watching a big crane put a big piece of metal onto the bridge, an Indy Metro editor who shall remain nameless got Tim’s business card (which read, “Faculty Liaison to the Brown Men’s Basketball Team”). And while these weekly updates are required reading for anyone bored of the endless Fane Tower discourse, you unfortunately have to wade through Tim’s other tweets, which are filled with Resistance content like “#trumpresign #trumpresign #trumpresign #notmypresident” (0 replies, 0 retweets, 0 likes) and Obama fandom (forever pinned). 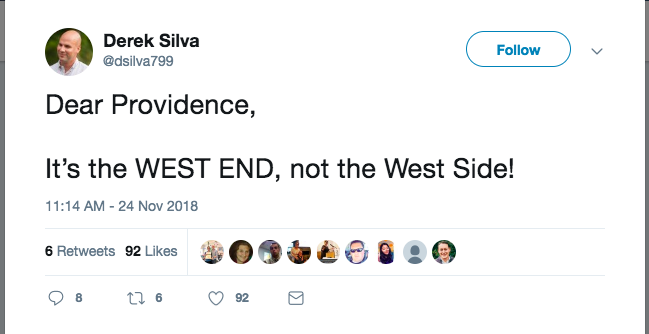 Derek Silva, President of the Providence Firefighters Union, sparked a Twitter war with a question of nomenclature last month. While we can’t really get behind Derek’s claim that the rebranding of the West End as the “West Side” by millennial transplants to Providence is “gentrification at its worst,” we wonder what it says that one of like...10 New American bar/bistros on the East Side is called the East End. At the Indy, we’re firmly #TeamSharks, and think Derek should be counting his lucky stars that no one has tried to rebrand North Providence as NoProv yet. 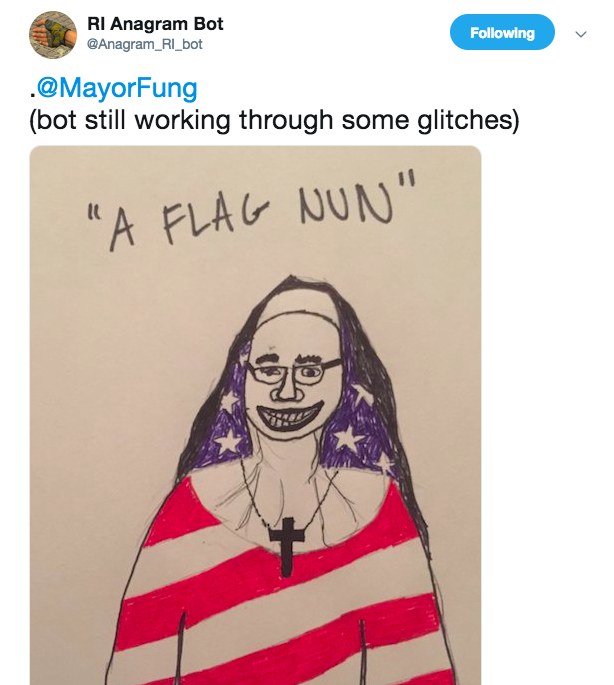 Despite countless other honorable tweets (regrettably, neither the escaped Johnston turkey, nor Sam Howard’s wild thread comparing RI’s CEO Gina Raimondo to French President Emmanuel Macron, nor the deflated decorations Phil Eil found on a trip to Providence Place made the listicle), we’re using the #10 spot to toot our own horn once again. Two Indy staffers, late one night in July, discovered online anagram solvers and plugged in some familiar names. A few minutes later, RI Anagram Bot was born. Negative bonus points for not realizing ALLAN FUNG has two Ls in his name before drawing “A FLAG NUN,” and double negative bonus points for getting no likes nor any followers, and triple negative bonus points for just generally having a super lame sense of humor. Either way, history is treating these tweets kindly, and hopefully all they need is a little more exposure.