An examination of the tradition of half-staff 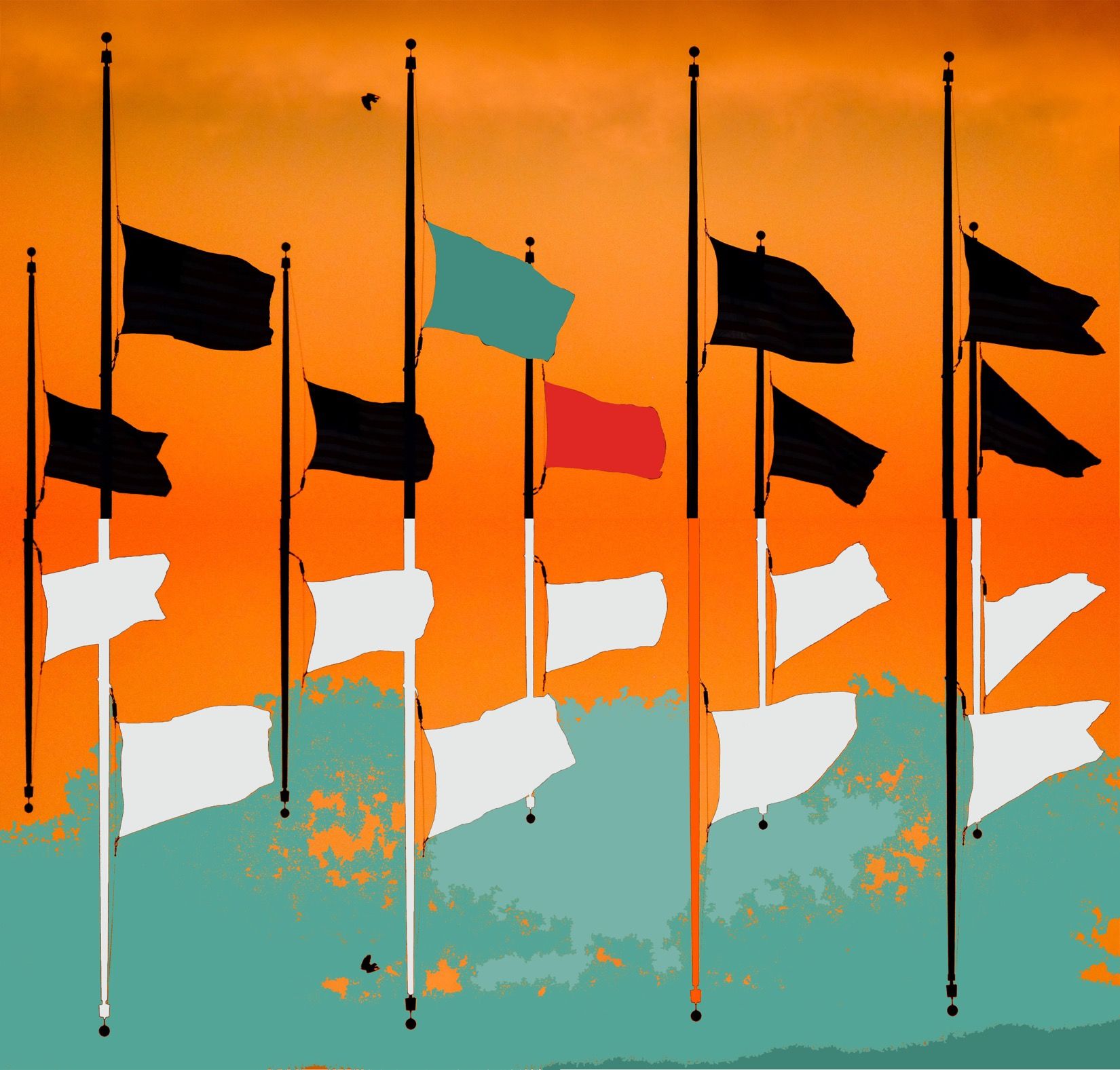 Mark Barnes, Chief Property Manager of the Rhode Island Capitol Campus, might get the email from the Governor’s Office at 3:00 in the afternoon or when he arrives between 6:00 and 6:30 in the morning. Mark promptly directs his employee Ed Butler to lower the flags to half-staff. Ed retrieves the key to the roof of the Rhode Island State House and lowers the US and Rhode Island flags to half-staff. The matter of who and what the ritual honors is not in the purview of Mark and Ed. They do not make the policy; they execute it.

Half-staff is the tradition of displaying a flag at half the height of its flag pole in commemoration of the death of a significant person or a tragedy. It attempts to establish a national ritual of community mourning. Yet its conception of community and who is “deserving” of remembrance invalidates its project altogether. Half-staff and its authoritarian, top-down way of remembering people champions the lives of the political elite and law enforcement while ignoring the remembrance of almost everyone else. In its unwillingness to mourn those outside of state power structures, half-staff loses its supposed significance and becomes a hollow tradition.

According to The United States Flag code 4 USC § 7(m)(1), the logistics of half-staff, referred to as half-mast for flags at sea, are the following: “The flag, when flown at half-staff, should be first hoisted to the peak for an instant and then lowered to the half-staff position. The flag should be again raised to the peak before it is lowered for the day.” US flags are directed to half-staff by proclamation of the President or Governor of the state in question.

There are two scenarios in which the U.S. flag is flown at half-staff nationwide. First, certain occasions oblige the President to direct flags to half-staff for specific periods of time. For example, if a sitting or former President dies, the flag must fly at half-staff for 30 days (this was called into effect just a few days ago for George H.W. Bush); 10 days for the death for the Vice President and other senior officials on Capitol Hill. Notably, President Trump was criticized for prematurely restoring flags to full height following the death of Senator John McCain. Many accused the President for doing so because of his political disagreements with the Senator.

The second scenario is—and here is where it gets interesting—that “in the event of the death of other officials or foreign dignitaries,” half-staff is at the President’s discretion as long as it is “in accordance with recognized customs or practices not inconsistent with law.” If that clause seems oddly vague—it is. In short, the flag can be ordered to half-staff whenever the President wants. In practice, the flag is generally flown at half-staff for three reasons; the death of a prominent figure (other than the cases already included in the explicit code), a fatal tragedy, or a national day of remembrance—think Memorial Day or Pearl Harbor Remembrance Day. In 2018 so far, The US flag has been at half-staff on 11 separate occasions, totaling 40 days. Five of the 2018 occasions have been to honor the victims of mass shootings, four have been for public figures, and two have been days of national remembrance. However, many half-staff directions are up to the judgement of the President or Governor. On March 2, the President directed flags to half-staff in memory of Billy Graham, neither a public official or national tragedy. The code also explains that the Governor of each state can direct all US flags in the given state to half-staff for the death of current or former government official, the death of a member of the Armed Forces native to that state who dies while serving on active duty, or the death of a first responder who dies in the line of duty.

As most of the people honored by half-staff are political figures or first responders, it serves as a means for commemorating agents of the state. Other than occasions of mass killings, a majority of half-staff proclamations honor military or police holidays (like Police Officers Memorial Day and Patriot Day) and political leaders like George H.W. Bush or Nancy Reagan. As such, the tradition’s attempt to constitute collective mourning is nullified by its prescriptive and unrepresentative nature.

The tradition of half-staff is a public memorial, much like a monument or a day of remembrance. Urban Historian Dolores Hayden, in her book The Power of Place: Urban Landscapes as Public History, illustrates that a bottom-up approach to public monuments and collective memory is vital to commemorating representative histories of places and people, and thus creating inclusive and democratic spaces for all. To uphold a collective history and establish pride in one’s community, it is important for that community to have agency over the stories they tell and the people, places, or things they decide to remember. By the nature of its top-down procedure, half-staff determines who is deserving of remembrance without regard to the communities that it supposedly attempts to serve. In doing so, it fails to contribute to an authentic collective memory or meaningful process of mourning. Similar to other forms of national remembrance or public symbolism—in the form of statues, plaques, murals, street names, or memorials—flag-lowering rituals are forms of national remembrance that celebrate white men and their glorified accomplishments. Monuments to radical popular movements and subversive political action, especially that which is carried out by marginalized people, are blaringly absent because so often they stand in direct opposition to the power structures that get to decide who is commemorated. Furthermore, because of its reliance on the flag as a symbol, half-staff requires a belief in an American identity in order for individuals to participate. The question of flying a flag at half-mast becomes not about community mourning or collective history, but rather an arbitrary value judgment of the President or Governor prescribed upon the people for whom it supposedly serves.

Both locally and nationally, half-staff proclamations idolize law enforcement officers who have died in the line of duty. It is customary for US flags to be lowered to half-staff in a locality for such an occasion. By drawing the distinction between the death of first-responders and the death of civilians, half-staff prioritizes the lives of first responders—a sentiment that is often weaponized to justify police violence. The death of civilians is only commemorated in the case of gruesome and publicized tragedies like the mass shootings in Pittsburgh, PA or Thousand Oaks, CA. According to the Officer Down Memorial Page,  a non-profit organization that memorializes law enforcement officers, there have been 134 officers who have died in the line of duty in 2018, a smaller proportion of whom died in a non-accident. A Washington Post article reports that 876 civilians have been shot and killed by the police this year. On Thanksgiving night, a Black man named Emantic Fitzgerald Bradford Jr. was shot and killed by police at a shopping mall in Hoover, Alabama. He was an Army
Veteran; he was not honored publicly. To commemorate him would be to acknowledge the state violence that is primarily carried out against people of color, despite his veteran status. So, instead of commemorating Emantic Bradford Jr., the flag was just directed to half staff for 30 days for the death of former president George H.W. Bush.

Even among civilian tragedies, half-staff is reserved for specific cases. Natural disasters—in the past several years—have not warranted half-staff directives. Yet, if a first responder dies in the rescue, localities may lower their flags in commemoration of them. What is the distinction between mass deaths during natural disasters and other tragedies like mass killings? The US flag recently was called to half-staff for the heartbreaking mass killings at the Tree of Life Synagogue in Pittsburgh, PA and Thousand Oaks, CA. It was even ordered down for tragedies in Paris and Brussels; however rarely, if ever, does it honor tragedies outside of the US or Western Europe. How many civilians must die to be remembered with half-staff? In what manner must they die? Who must die? When it comes down to it, the tradition of half-staff is not only unrepresentative, but also utterly arbitrary.

While the supposed purpose of half-staff is to honor figures and histories important to the public, ironically, it generally excludes the public from the decision making process and of being commemorated themselves. It is a tradition that fails to contribute to a meaningful ritual of community mourning.

If the tradition of half-staff largely fails to fulfill its purpose and remains unnoticed by the majority of people, why does it endure? Half staff’s purpose is to uphold its own history—tradition for tradition’s sake. It attempts to galvanize a nationalistic remembrance, telling the public who is important and who it should remember. It contributes to an ethic that governmental service is the highest honor and contributes to the erasure of victims of state violence. Still, the nation’s flags will fly at half-staff for the next few weeks commemorating the 41st President of the United States. Much of the country, other than Mark, Ed, and countless others who are obliged to carry out the labor of this tradition, will not give it a second thought.