This article is the fourth installment of a month-long series, “Through the Muck,” tackling climate change in Rhode Island. 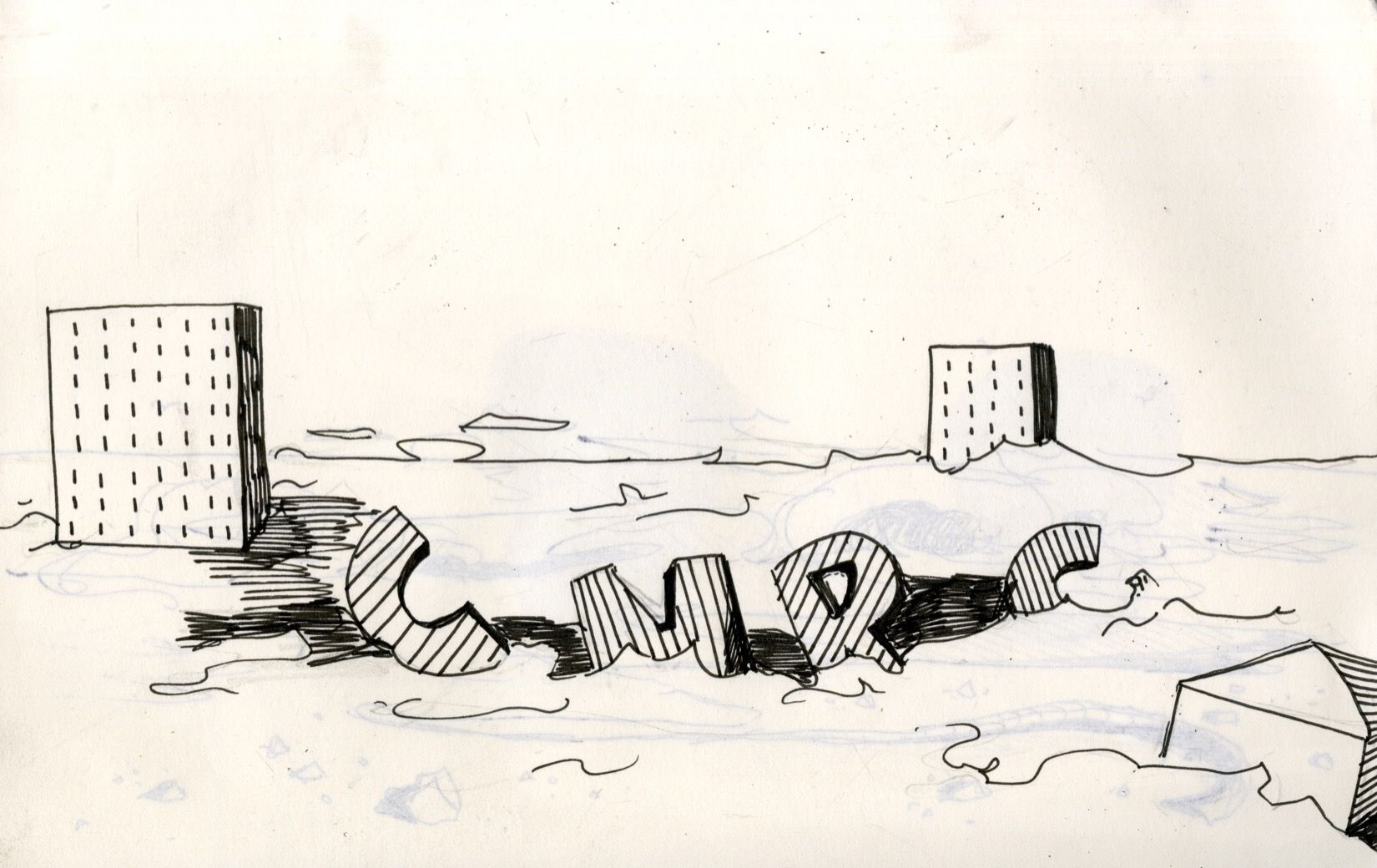 On a rainy day in November, I sat in Grover Fugate’s office at the Coastal Resources Management Council in Wakefield and watched Rhode Island flood. The rain pounded biblically at the window, but on the digital model in front of us, it was the sea that took Warwick, crashing through houses and across Highway 117.

Next to walls adorned with faded pictures of Norwegian fjords and offshore wind turbines, Fugate’s laptop displayed a satellite image of Warwick, punctuated by almost 2,200 red and orange dots. These dots represented Warwick structures that would be critically damaged in Fugate’s model of a 100-year storm, a severe event statistically one percent likely in any given year, magnified by a projected seven feet of sea level rise.

Fugate, the Council’s executive director since 1986, is in the business of predicting the future. The National Oceanic and Atmospheric Administration forecasts 10 feet of sea level rise in New England by 2100. But Rhode Island’s coastal planners know that this is just one part of the story. They've generated flood maps that factor in coastal erosion rates (doubling by 2100), saline intrusion into groundwater, and wave damage from storm surge—the cascading effects of runaway carbon emissions. “Our communities have an opportunity to see what might happen without having to experience the actual event,” Fugate told me of his models. “Now the question is what [they’re] going to do about it.”

The Coastal Resources Management Council—scintillatingly self-described as a “management agency with regulatory functions”—is a state agency charged by federal law with preserving and protecting the 400 miles of shoreline that give the Ocean State its name. The Council undertakes this weighty task from within the Wakefield’s Oliver Stedman Government Center, a brutalist brick and concrete building also housing a DMV and and traffic tribunal. I made the 40-minute journey south from Providence along the Narragansett Bay, hoping to better understand the byzantine world of coastal planning, a dense combination of highly technical climate and geological science and local zoning policy that nonetheless holds sway over the fate of large swaths of vulnerable coastline, including 21 coastal communities.

“Sea level rise is really a land use problem,” Fugate said when we sat down. And land use—regulated through zoning—is a the responsibility of municipalities, “the least prepared and least resourced entities in the United States for trying to deal with” sea level rise, according to Fugate. Zoning is by design hyper-local, but sea level rise is a broader problem, a mismatch for the capacities of local municipal governments. These bodies are limited by two-year election cycles that disincentive long-term planning from elected officials. They also can’t run deficits, like the federal government—even if towns wanted to put together an ambitious package of infrastructural reforms to ready themselves for a rising sea level and increasingly intense storms, the funding isn’t there.

The Coastal Management Resources Council can’t solve this problem, but it fills a knowledge gap for local planning departments. In addition to developing its own management plans, Fugate’s Council, with a staff of scientists and engineers, helps Rhode Island’s cities and towns understand what their shorelines will look like in 100 years time, through detailed modelling. It’s essentially a state agency helping local governments make decisions where federal guidance comes up short.

And, according to Fugate, it comes up very short. The Federal Emergency Management Agency (FEMA) creates maps dictating eligibility for federal flood insurance, mandatory if you live in a FEMA-defined flood plain (the US is the only country to provide this insurance on the government’s dime, and FEMA is in massive debt thanks to increasingly frequent catastrophic storms). But the FEMA method for modeling storm surge risk is a “mess,” said Fugate. The federal agency’s maps lack detail, and their creators lowballed offshore wind speeds. This means the federal flood zone estimates are off by up to eight feet: “the difference of whether you got a home or not” after a storm rolls through, said Fugate.

In response to the lack of accurate federal modeling the Rhode Island Coastal Resources Management Council developed the Coastal Environmental Risk Index (CERI) and STORMTOOLS maps that show local planners what sea level rise will do to their cities and towns in the coming decades. Developed over the past two years, the CERI maps—with their foreboding red dots—combine sea level rise, erosion, and storm surge data to produce building-by-building damage estimates for large storms coupled with rising waters. “We’re leading the nation in this,” says Fugate. A 2012 law in North Carolina banned its coastal planners from using any sea level rise predictions and other southern states prefer the language of “coastal hazards” over “climate change”—because realistic planning was deemed harmful for coastal housing markets. Unlike in North Carolina, Rhode Island’s coastal managers have chosen transparency over avoidance.

Even so, high-tech modelling can’t force municipalities to act, says Fugate. “If I got up and started talking about recurrence level storms to municipalities, the [urban] planners sort of glaze over on me,” he said. Not all planners, it turns out.

Fugate referred me to Chelsea Siefert, a career urban planner, who has been South Kingstown’s director of planning for two years, where she’s employed with the Council’s modeling. Siefert previously worked for the state Division of Planning, developing guidance for local governments on integrating the likelihood of future natural hazards into their comprehensive plans, which outline the “big picture, [or] what we care about,” according to Siefert. Local planning departments vary widely in staffing depending on a community’s size and tax base. “We’re lucky in South Kingstown,” said Siefert in a phone call last week. Her office has a staff of five people and benefits from “a generally Democratic and progressive town council who takes things like sea level rise and climate change seriously”—the ideal situation for a local planner whose priorities lie in addressing the effects of these coming changes.

These effects are serious. A 100-year storm with seven feet of sea level rise will damage almost 20 percent of South Kingstown’s structures, according to the Coastal Resources Management Council’s modeling. “We feel like we have a good handle on what needs to happen,” Siefert said. “What we don’t have the capacity or funding for is actually making the changes that we identify.” She described unsuccessfully trying to fund a renovation of a critically exposed roadway (a $3.5 million project) for “years.” The work of raising bridges, redirecting roadways, and protecting critical infrastructure takes money and planning years in advance. Even in South Kingstown, a community with the highest bond rating, a large capital reserve (the best possible financial situation for a municipality), and the necessary political will, “we still just can’t make it work.” Siefert said the documents and information produced by Fugate’s council are critical, but they don’t tell municipalities how to overcome the structural limitations placed on the actions they would like to take. “I think that’s the municipal frustration,” she said, “We don’t feel a lot of support from the state.”

And there’s another obstacle standing in the way of common sense sea level rise planning: property rights. Siefert says she sees three approaches to coastal planning, given the rising waters. Protect (hardening buildings to ensure they aren’t damaged), adapt (build differently to mitigate impacts), and retreat (moving out of harm’s way). “For some places, retreat is the preferable option,” she said. But “we don’t really know if that is a legally viable thing for a municipality to do because we can’t take property rights away,” per the federal and state constitutions. There are exceptions to this rule—zoning should protect “health, safety, and welfare” of a community—but Siefert said she lacks guidance on when taking property rights is permissible. Fugate also said the property rights issue weighed on his mind. “If there’s takings [of property] found, particularly on our shoreline where we’re usually dealing with multiple millions [in property value],” regulators could expose themselves to lawsuits and completely undermine their authority.

While Siefert and Fugate can’t simply tell Rhode Islanders to move out of the sea level rise and storm danger zone, they can require developers and home-buyers to think ahead, changing mindsets to force Rhode Islanders to grapple with the ongoing coastal changes. The Coastal Resources Management Council, unlike similar bodies in other states, is tasked with permitting all new construction along the shoreline. To go through the Council’s process, a developer or property owner must answer a simple question with radical consequences: “how long do you want your structure to last?” Based on this answer, the council tells the builder how it has to build based on its sea level rise and flood projections. Developers of the proposed $29 million Hammett’s Wharf Hotel in Newport had to redesign “to accomodate an additional two feet of sea level rise,” said Fugate. Fugate called the permitting a “no regrets policy” because it forces property owners to grapple seriously with the coming effects of global climate change.

This permitting is also filed with the deed, meaning future buyers will know exactly the assumptions made by the original builders. Buyers are using the council’s modeling, says Fugate, to avoid houses in the path of rising seas and storms. Siefert is also trying to enforce future-thinking by amending South Kingstown’s zoning ordinance. “Sea level rise, because it’s so gradual, will never feel urgent,” she said. Both Fugate and Seifert hope to change this, buyer by buyer.

Neither has illusions about what will happen as the ocean encroaches on its state. In the absence of structural fixes that allow municipalities to act in bold ways, the (inevitable) arrival of large storms will dictate how communities change. “There’s enough money in this country right now that there are people that will always be able to build on the shore without any mortgages, without any insurance,” said Fugate. “What we’re trying to do is get information in the hands of that second, third, fourth row back because they can’t afford losing their structures.” These people will bear the burden of a rising sea level. Without flood insurance and suffering major damage to their homes, they’ll have to leave, accepting the loss of their homes and the asset it represents—a situation that’s become increasingly common across the US. Rhode Island will be no different.

LUCAS SMOLCIC LARSON B’19 has made the switch from Google Maps to STORMTOOLS.