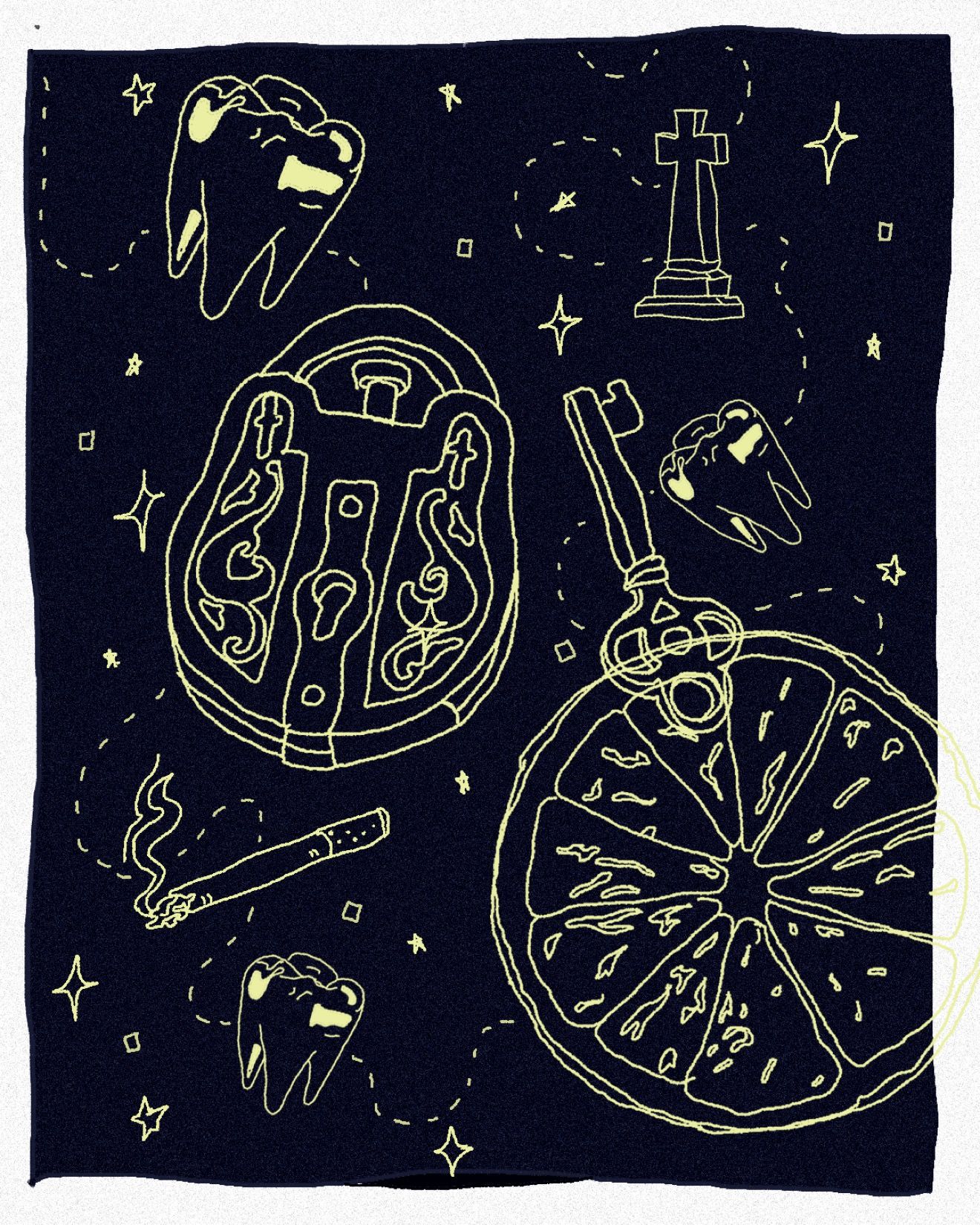 Margaret Boyle woke up and her left incisor was loose. In her dream, she was crushed under a giant unspecified citrus fruit and she wondered if the looseness was a byproduct of that. There was something she found terrifying about oversized versions of controllable objects. A dark throb sounded from her tooth. Margaret loved analyzing her dreams and frequently looked up their astrological significance on various homeopathic websites. Supposing a dentist’s visit was in order, she shook out her vertebrae and stomped into the kitchen.

This was confusing to Mrs. Boyle. She shook her head.

“What flowers are the ones in the window?”

Margaret Boyle tapped her tooth thoughtfully. Her nail was keratin and her tooth was keratin and the two coming together outside of her body made her squeamish. Now that she thought of it, bones coming together inside her body made her squeamish too. She became aware of how her humerus connected to her ulna. She became aware of how she didn’t feel any ownership over these bones. She became aware every act of care was just counteraction. Margaret felt very small in her body. She felt like a dried pea in a pot.

“Mother. I need to go to the dentist.”

“The flowers are unspecified flowers. They really are more the idea of a flower than a flower.”

Mrs. Boyle’s hand shook and she leaned off her chair as if the closer she got to the flowers in the not window the better she would understand them.

Margaret Boyle tried to relate. “I had a dream about unspecified citrus. It was really more the idea of citrus than a fruit.”

Margaret Boyle literally couldn’t think of anything more similar. Her mother was being deliberately obtuse. The entire conversation was a waste of her time because she could feel the bones that weren’t hers creaking and her left incisor was loose.

“I am going to the dentist.”

Spotting her blackand lime-striped duster on the back of the wooden chair, Margaret Boyle crossed the kitchen and began to tug at the duster. A corner of it was stuck beneath her mother and Margaret Boyle punctuated every word with a tug.

With a final yank the coat came free and Margaret Boyle exhaled for the first time since she woke up. She shrugged it on over her pajama set and headed out the door.

The faint voice of Mrs. Boyle trickled after her.

The weather outside was perfect: gray and drab. Where it’s calm under the winds and the skies are on the verge of breaking. Margaret Boyle believed she looked especially beautiful in this kind of weather. For a time, she hovered on the sidewalk enjoying the almost rain and thinking of all the things she could define in the negative. All emotion resided in the absence of happiness. All cats are not dogs. Slim ankles began to move and the rest followed obediently. The more she moved the more malicious the sidewalk seemed to feel. Her tooth chanted, low and sweet and livid. Succulent succotash achy ache. Margaret Boyle realized she had left the house without any shoes on. This wasn’t atypical; Margaret Boyle’s toes were long and lovely and she had a good relationship with them. She didn’t like cooping them up. They served her well on hills and other inclined surfaces. She made a sharp left and arrived at the dentist’s office. A sour looking receptionist sat up.

“Do you have an appointment?” All the air in the room was sucked into the receptionist and filtered out through each pinched phrase. The office was warm, damp and dark and smelling of rancid hot dog water and Chanel No. 5.

“No.” Margaret Boyle hadn’t anticipated that the dentist might have other clients.

On the marbled glass of the reception desk passed a shadow. Margaret Boyle supposed this was the dentist.

“Dentist,” She called after the shadow. “Dentist! My tooth is loose.”

The receptionist let out a low sirocco. The papers on her desk whispered as darkness approached. This darkness was more the idea of the dentist than a dentist. Although, Margaret Boyle felt anyone would do in a pinch. The dentist beckoned her to a chair but she remained on her feet. It was all very sterile.

Her dentist took a puff from his cigarillo and flicked the embers onto the linoleum. Smoke stuck to the wall tops and corners. He coughed.

“That’s not the problem.”

“It could be a problem.”

“My tooth is loose.”

“Suppose I should take a look.” He poked her with the back of his cigarillo. “Sit.”

She sat. He pushed the fingers of his right hand through her mouth and grabbed her tongue. The other hand mechanically brought the cigarillo to his pursed lips every few seconds. She could taste the rot of his skin.

“Gross.” He removed his hand from her mouth and shook off the slobber angrily. Thrusting a cup of blue fluid at her, he coughed, Pollacking her face with spittle. “Swirl.”

The dentist moaned and furrowed his brow. It loomed, cliff-like, over his nose.

“Look, Margaret Boyle, I think I’m in love with you.”

He patted his coat pockets and fished out an oblong cigarette case. It was gunmetal grey and inscribed with the words “Satan was a Lesbian.” Inside was  one cigarillo and one poem. With the other hand he pulled out a magnifying glass. The poem was written on a gum wrapper. He cleared his throat, peered through the glass and read it.

his lovely lilac lips were stained but I kissed him anyway

between the earth and my love there will be nothing left

“No, I wrote that from your perspective.”

She considered the statement to make sure it was true, although she regarded herself fickle enough that truth was personally immaterial. Margaret Boyle did feel strongly about how empty her feelings were towards the dentist.

“No,” she said deliberately. “I do not feel that way.”

“I know that, Margaret Boyle. This is how I think you should feel about me.”

“But I don’t.” Margaret Boyle felt the dentist was missing the point.

“Your lack of any kind of feeling towards me is a great barrier in our relationship.” The dentist felt Margaret Boyle was missing the point.

He seemed disappointed and his face sunk lower. Maybe nobody had a point. Margaret Boyle was a kind soul or so she liked to think. She decided he was growing too long and dark for his own good.

“Gemini.” Said the dentist with a seed of hope.

Margaret Boyle realized her left incisor was still loose as she scuttled out of the office. She supposed she’d just have to live with the looseness. It wasn’t really loose. It was just the idea of looseness anyway.