Ask For Something Sweet 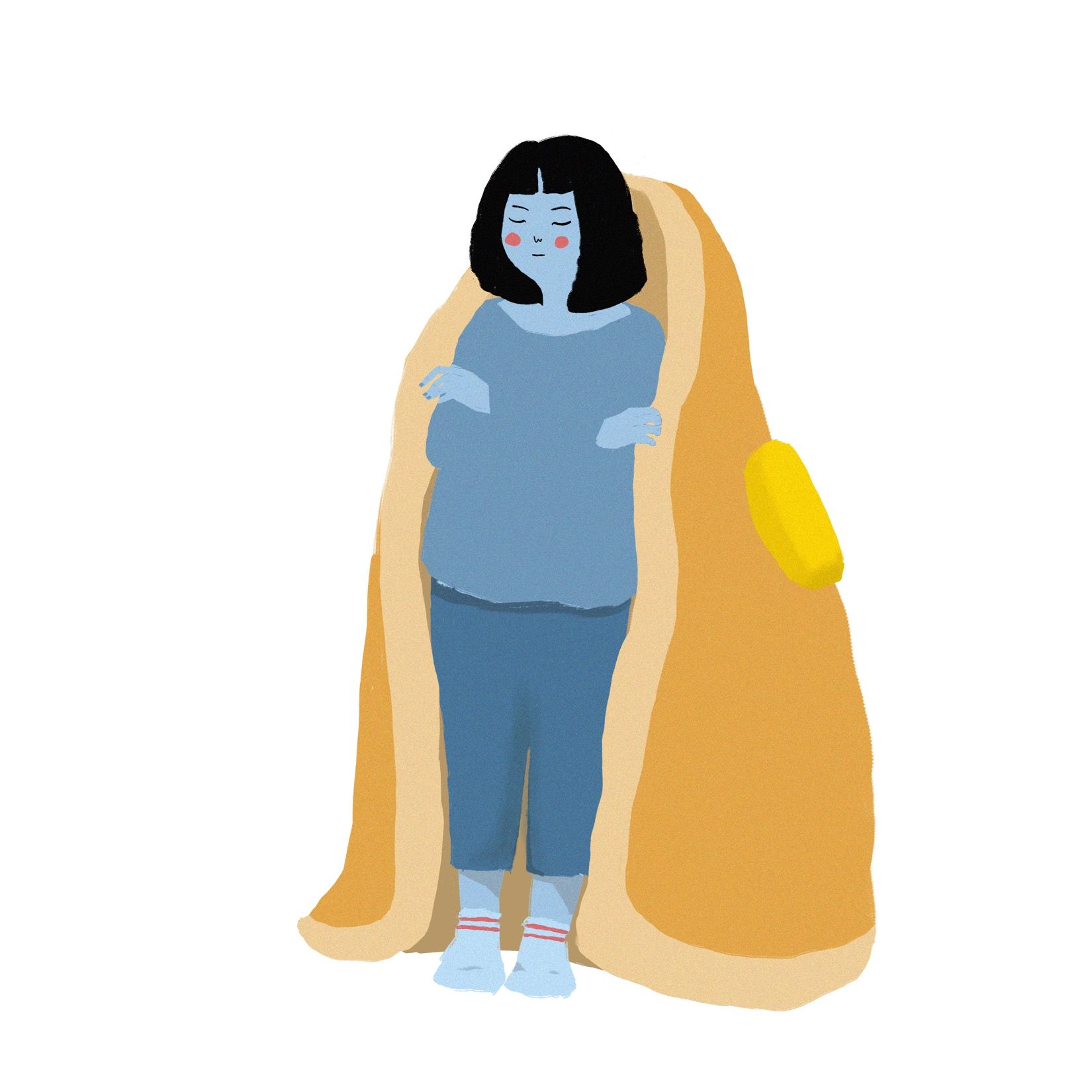 Pie or cake? he asks.

Cake, you say. He raises his eyebrows.

The next afternoon, he comes into your room, breathless, bringing with him a package from his parents. When he’s done gutting it with the Swiss Army knife he always carries in his right pocket, there are two loaves of bread and a pumpkin pie. When the Saran wrap falls away, you have to remind yourself to smile. It doesn’t look like much—there’s a crack in the custard. You can tell he’s anxious; his brow is furrowed as he cuts you both a slice, the golden crumbs spilling onto your desk. He wants you to choose pie, to choose him. You suppose the love you ask from him is indistinguishable from pie. Humble, warm, a home that you fold yourself into.

The first bite is unassuming. But with the next forkful, you begin to taste the flesh of the pumpkin, the cinnamon and nutmeg melting warmly into you. You tell yourself to eat slowly because he can’t know that this is your first pie. You let him apologize for the crust, how it doesn’t quite melt perfectly on the tongue, how he always tells his dad to be liberal with the butter but maybe the crumb is dry because it was made three days ago. He tells you that this pie is made from a Cinderella pumpkin, and you imagine it golden, glassy.

In all the versions of Cinderella, the first time she asks for something, it’s for permission to go to the ball. All her life, she has indulged others. The birds ask her to sing with them, the stepsisters ask her to embroider dresses, the stepmother asks her to sweep until there are ashes in her hair. But the moment that she wants something, she ceases to be palatable. When she asks to go the ball, her stepmother and sisters tear her dress and dreams to tatters. Cinderella is no longer so sweet when she has desires.

Another slice, he asks. You nod.

The grapefruit dawn streams in through the curtains of your childhood home. But, unlike before,  it isn’t the warmth of caramelized sugar and flour that wakes you, but the muffled voices of your parents arguing. You already know that your father will pad downstairs in his slippers, softer than usual. You know that not long after your sister snuggles into your side of the bed to hold your hand, you will hear the thump of the flour bag, the crack of an egg, the chop chop chop of scallion being reduced into fragrant green slivers. When you were younger, you and your sister would tread down the stairs, careful to skip the fourth step which always creaked horrifically. When he saw you, he would smile with crow’s feet. Then, he would give both of you small pieces of the dough. You knew how to first twist the sticky dough into a snake, curl it into a snail, and roll into a pancake. He always let you put the misshapen pieces into the pan, and you would watch as they seared into translucence. You would stack the flakey disks on a plate, unchipped if you could find one, and take it to your mother. A peace offering.

Come here. You have to eat at least two, he says, flipping the pancakes with a graceful flick of his chopsticks. He doesn’t ever have to check if they’re ready.

No, you say, nibbling a cracker. Remember, I’m sick. You wonder what it is that makes Cinderella so appetizing.

Perhaps her beauty could be attributed to the absence of power. Cinderella is stripped of many things: her mother’s dress, her dignity, her place to sleep in the house. Cinderella never strips others of anything. She never asks for anything in return, preferring to sleep quietly in the ashes of the fireplace of her home. She lets her stepmother and stepsisters live without retribution. Even when Cinderella can do something, she does nothing. It seems that the only change becoming a princess makes in her life is where she sleeps.

What, come on, your father says, taking back chopsticks that were about to deliver a crispy bite to you. But I don’t understand, you used to eat so many. So many. He shakes his head.

Do you ever feel good about not eating when you’re sick, your father says.

No, not really, you say, watching him rain sesame seeds down on the steaming plate of pancakes.

But like you know, on a deeper level, sometimes you feel good, he says, looking into your face.

Mmm, you nod, both staring at the pancakes.

You wonder if there is a way perhaps to eat a pancake without eating a pancake. If you chew slowly enough on the first bite, eyes closed, the yeast and sugar will bloom spectacularly over your tongue into nothingness. Then, you can pretend it was the last bite and push your plate away and say you aren’t hungry anymore.

Or if you stare at pictures of yourself from one, two, three years ago, then every bite will curiously turn into dust. You have never been heavier than you are now. You can swallow and push the plate away. You aren’t hungry anymore.

Or if you start crying, your father will envelop you in a hug, and you will breathe in the dust of pancake batter, warm and floral. Then, you can let the stack become cold and dense, steeped in syrup, and say you aren’t hungry anymore.

Later, when you ask your father for the recipe, he writes to you in an email, detailing how the first time he had met your mother’s grandmother, she had taken him into her kitchen and showed him the proper way to make scallion pancakes. She held his hands and showed him how to fold the dough six times both for luck and for many wispy layers of dough. She showed him how to massage the dough with white pepper, olive oil, and slapping his wrist because don’t-you-dare-forget-the-sesame-seeds. If you love her, my great-grandmother said, this is what she loves. She made them every morning for my mother.

What would you do if I had one ear, he asks, lifting one edge of the pancake with the spatula. It’s the third time he’s checked on its progress in the last minute and you enjoy seeing him flustered so much that you don’t tell him to stop. It is clear who didn’t make the pancakes in his house.

When he asked you what do you want for your birthday, you smiled. Pancakes, of course. Let me make them for you, he said. You nodded, okay, and gave him your father’s recipe.

Now, he’s asking you if you would still like him if he was missing an ear, while he ladles batter onto the cast iron. It sizzles in a way that you know means that the pan is too hot but you don’t say anything. You watch him fumble with the spatula as the batter blisters into soft gold.

I don’t know what I’d do, you laugh, and reach out to pick a crispy bit off the side of the pan. Meet me in the next life with one ear.

Here, try some, he says, tearing off a laced edge. You let yourself smile, but it’s all wrong. The cake sticks to the roof your mouth, a damp lump, and you know without asking that he didn’t use the whole stick of butter. Ironically, fat doesn’t weigh flour and eggs down; it is what gives desserts their kindredness to air. Pancakes are meant to taste like the clouds. He tries to tickle your belly, but this time you don’t laugh.

After pancakes every Sunday, one of your parents will take you to the farmer’s market.

Get whatever you want, your father says, handing you a fistful of cash.

Whatever I want, you repeat.

Yeah, why not? Get some of that bread you got last time, you know the ones with lots of olives and those herbs.

But, what about Mama—

She’s not here, he says, waving his hand. You know what, if you find the bread lady, buy two. One for you, one for me.

This is how you end up holding a hokkaido squash, intercepted by the pumpkin lady. It is heavier than it looks, but you like the weight of it in your hands.

Isn’t she gorgeous, she nods at the blue squash in your hands. Roast them with a bit of salt and butter and mmmm, she says, rubbing the front of her apron, closing her eyes. Or wait, she says, her eyes widening and her crow’s feet deepening. Do you like pumpkin pie?

You wonder if this is what it feels like to have a fairy godmother.

On Sunday, the morning is pink, tinged with frost that has silenced the robins. The air is dense with something warm and bracing. You can’t quite pinpoint what your father has mixed into the batter today.

You want the second?

You take a bite. You let the tang of buttermilk, slight bite of salt, and fresh sweetness of maple syrup sear into you. You take another bite. Another. It’s pumpkin in the batter.

When Cinderella climbs into her pumpkin coach, all she knows for sure are the slippers on her feet. Her want is light enough to be carried on glass.

More? You nod, wondering if you will ever stop being hungry. Just one more bite.

STAR SU B’21 is seeking suggestions for what to do with the pumpkin on her windowsill.