Objects I found in Tokyo


While researching my trip to Japan, I was surprised to find that “Gross National Cool” was an actual governmental concern. A “Council for the Promotion of Cool Japan” had been officially assembled in 2013 for the promotion of Japanese coolness abroad. Hadn’t the battle already been won?

As it turns out, ‘Cool Japan’ is a continuation of Japan’s ‘pop cultural diplomacy,’ incentive, which dates back to World War II's aftermath. During an eight-year US occupation (1945-1952), Japan was forced to rewrite its constitution to include tenets of democracy and economic liberalism, in line with the Allies’ interests. National priorities shifted from military expansion to the cultivation of intellectual property, including patents, business strategies, and mass media. 'Pop cultural diplomacy' was adopted as a strategy to revitalize the economy and restore international goodwill.  The mission's sucess is more than evident. Were Japan’s web of soft power to suddenly materialize, we would see billions of individuals across the globe, their bedrooms or attic storage boxes overflowing with Japanese games, toys, and licensed products, seized within it. The sun never sets and the backlight never dims on Japan’s pop cultural empire…

Like the best pop-cultural commodities, Japanese merchandise has a crystalline density––the build-up of a back-and-forth between creatives, profit-driven higher-ups and a capricious international consumer base, egging one another on into crafting ever-richer, ever-intensified cliche-amalgams.

Yet when I arrived in Tokyo the day after school ended, my spirits sank. Circadian rhythms wonked, I was waking up in the middle of the night and reading the Marxist rants my friends wrote as finals on my laptop. As I traipsed through the nine floors of otaku merchandise, I was haunted by a phantasm from manga marginalia––a self-portrait of the mangaka sweating profusely at her desk due to impending deadlines and lingering flu symptoms. The generosity of  the virtuosic artist borders on masochism...I would rather be less frequently entertained than have anyone subject their body to abuse. And aren’t so many products generated, as my friend Alec put it, by the “collective hallucinations” of advisory boards, of needs that needn’t exist.. Intellectual property comes at a cost. My jet leg was like a coat of glue, with all the weight of misspent human effort settling over me like leaden particulates.

Another phantasm haunting me was my own home, due to Japanese designers playing off the mystique of American entities, like Trader Joe’s, Route 66 and... Rhode Island. 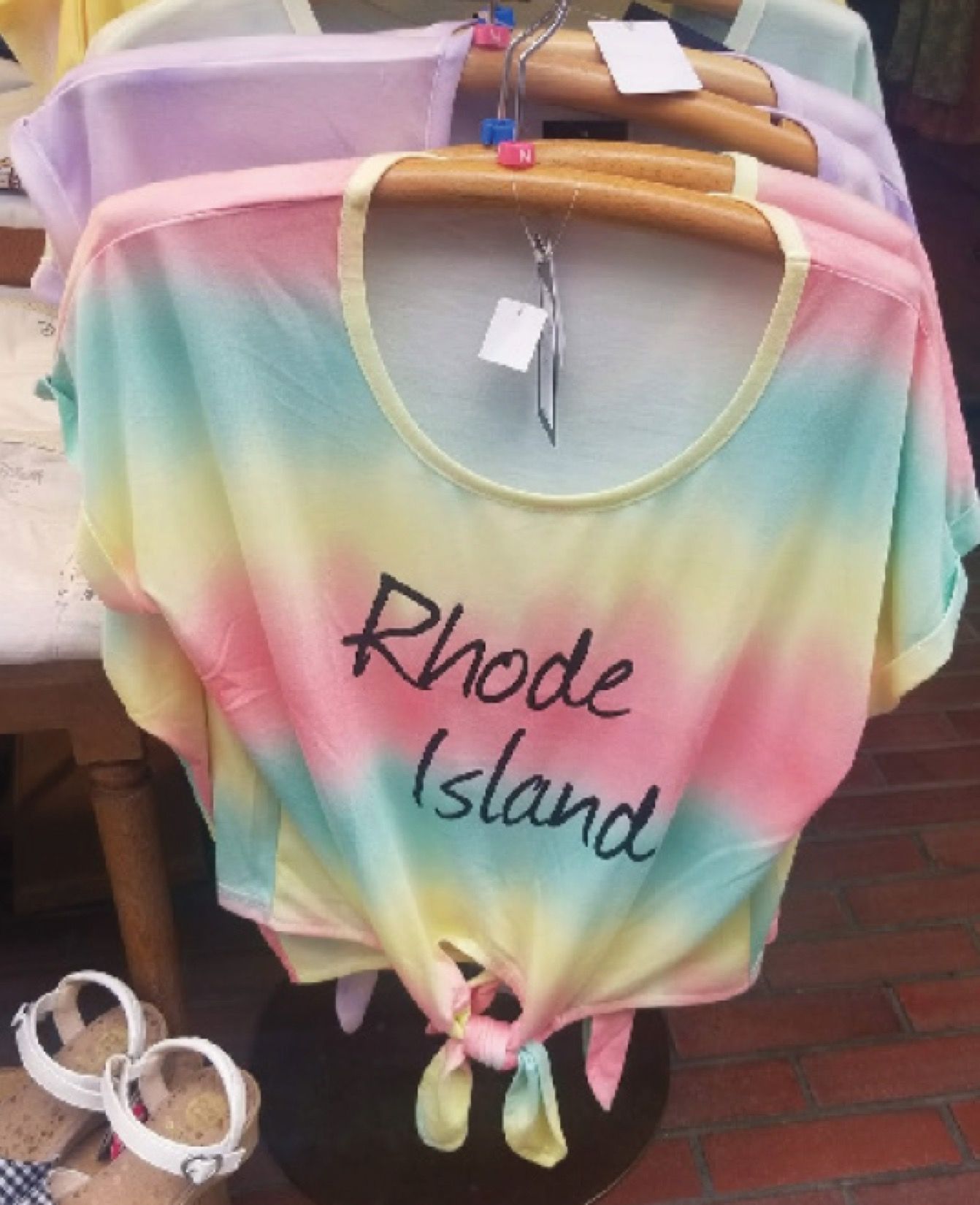 At every turn, I  encountered Cool USA –– remnants, distortions, and inventive recyclings of the same American power that first opened Tokyo’s markets.

Why––and at what environmental consequence, had I come at all?

Gradually, the paroxysm of guilt wore off, as did my jet lag, and I spent the rest of the trip buying things like normal.

I am now unsure how to reconcile my more critical impulses with my magpie-eyed love of collecting...the contradiction may live in the objects themselves, which speak of exhaustion and inventiveness in due measure.

Now, to borrow a tact from the “light novel,” Reborn as a Vending Machine I Now Wander the Dungeon: I will dispense for you the objects and a few facts. You are free to draw your own conclusions. 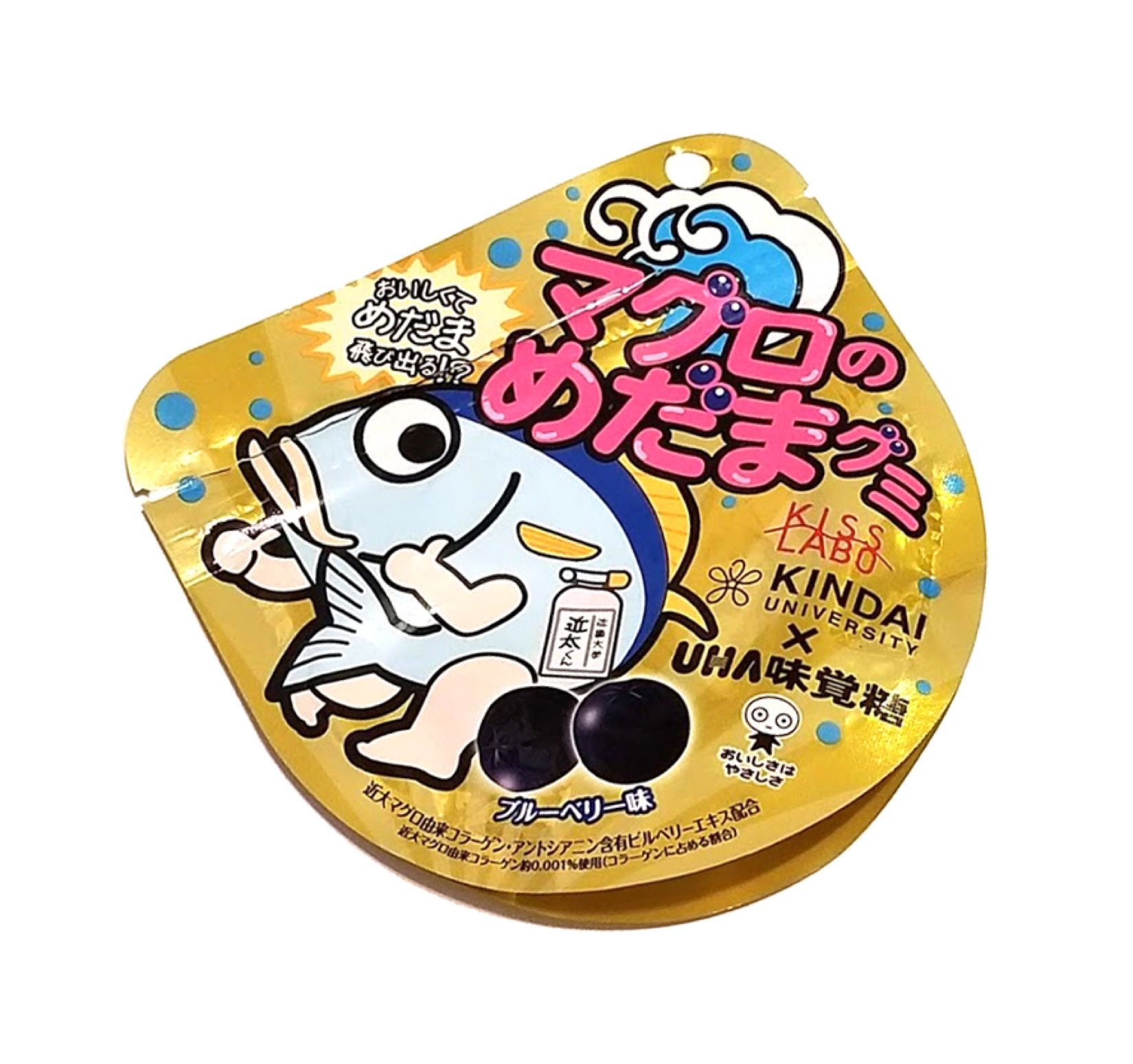 The [Brand] x [Brand] collaboration format was supposedly originated by Collette, a French boutique open between 1997 and 2017. Now, brand cross-breeding is the dominant format for high-profile product releases (Louis Vuitton x Supreme, Nike x Off-White, et al.). The packaging for these gummies treats a focus-group/crowd-sourced development platform held in Kindai (formerly Kinki) University, as if it were a brand-collaborator. A UHA press release translated from Japanese states,

“Within the “Academic Theater”, Associate Professor Taga Takeshi of Kinki University, who specializes in biological component analysis at the molecular level is working to collaborate on new confectionaries (...) KISS LABO (Kiss Lab) allows college students to disseminate ideas freely and to gather with the aim of developing the candy of their dreams.“

The kisslabo_uha instagram features photos of between two and four female students in custom-embroidered lab coats, posing with a promotional poster and product shelf.

These candies were part of Kindai University x Kiss LABO’s first official rollout, a lipstick and gummi line made using “rare full-length collagen” extracted from Chika Tuna. (As with U.S. protein culture, always the debate in nutrition over how intact molecular structures stay when they’re metabolized and reintegrated into new cells.) 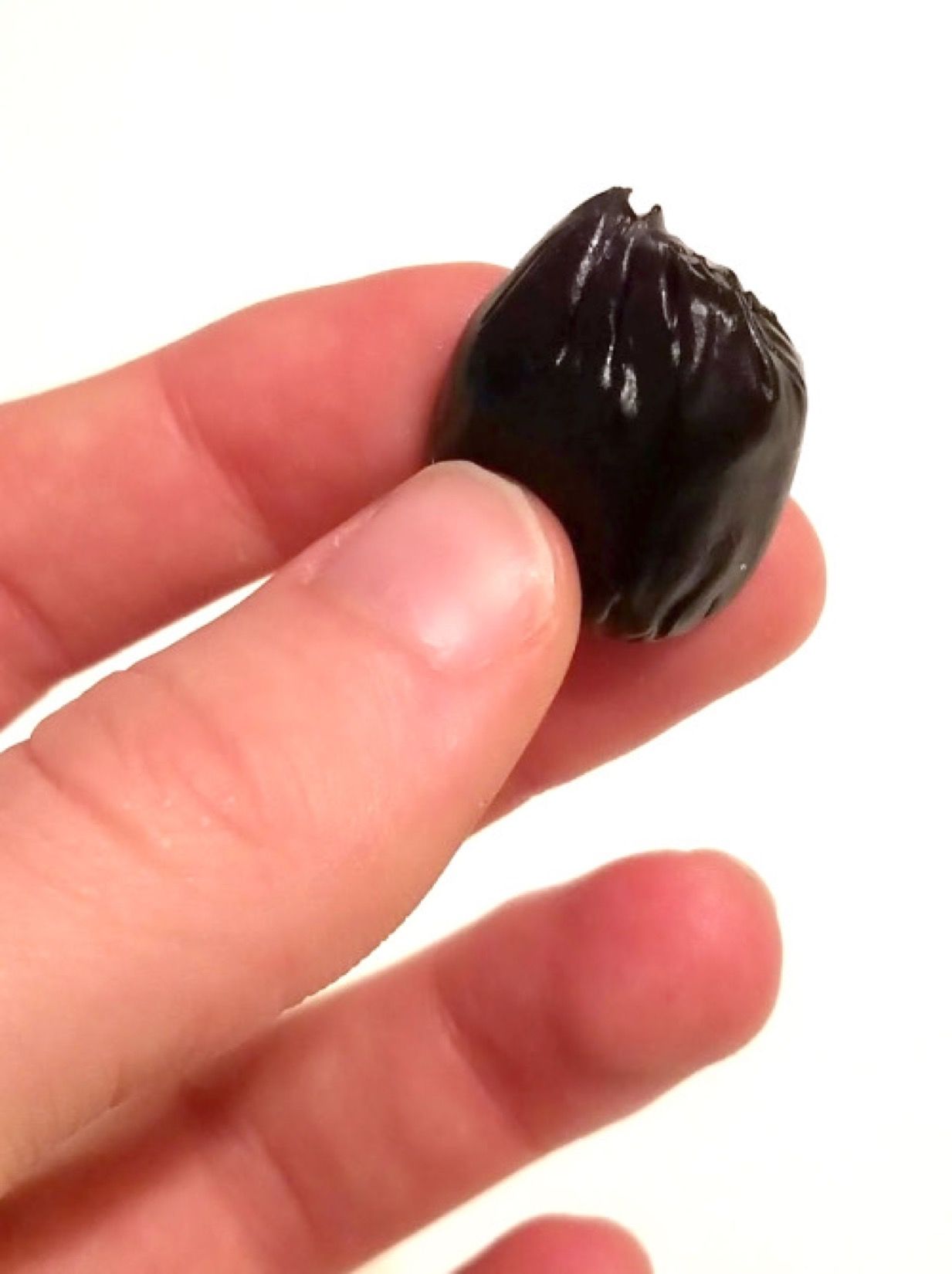 The gummies are designed to resemble tuna eyeballs, with a rubbery texture like octopus or kelp. They remind me of the petroleum food futuristic humans eat in a story from Breakfast of Champions.

Another instagram post from KISS Labo reveals their latest crowd-sourced idea: an ame-candy whose flavor changes with the introduction of two different kinds of saliva. 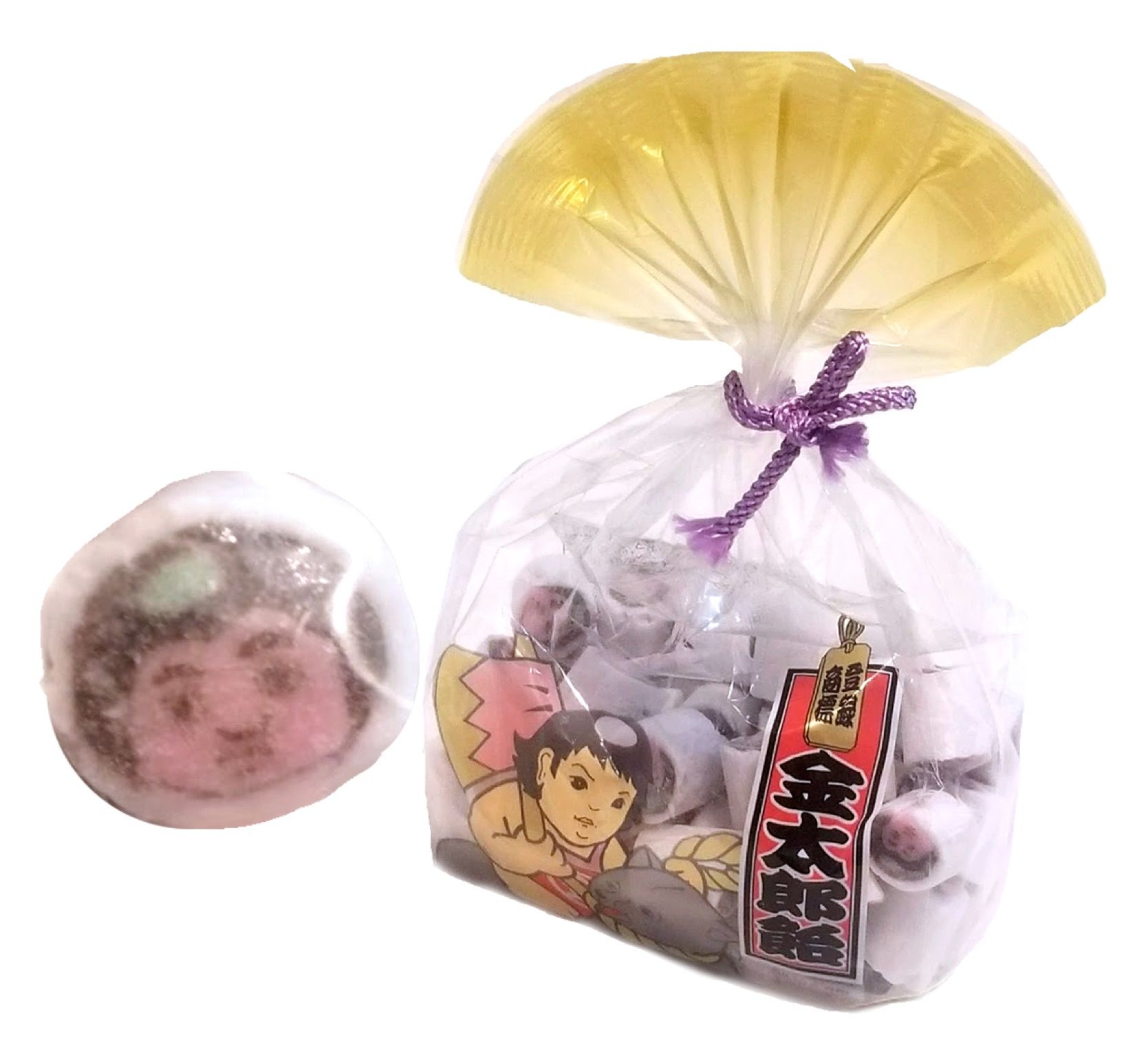 I picked up these hard candies because they seemed like a more blase version of the ones I’d found in LA: 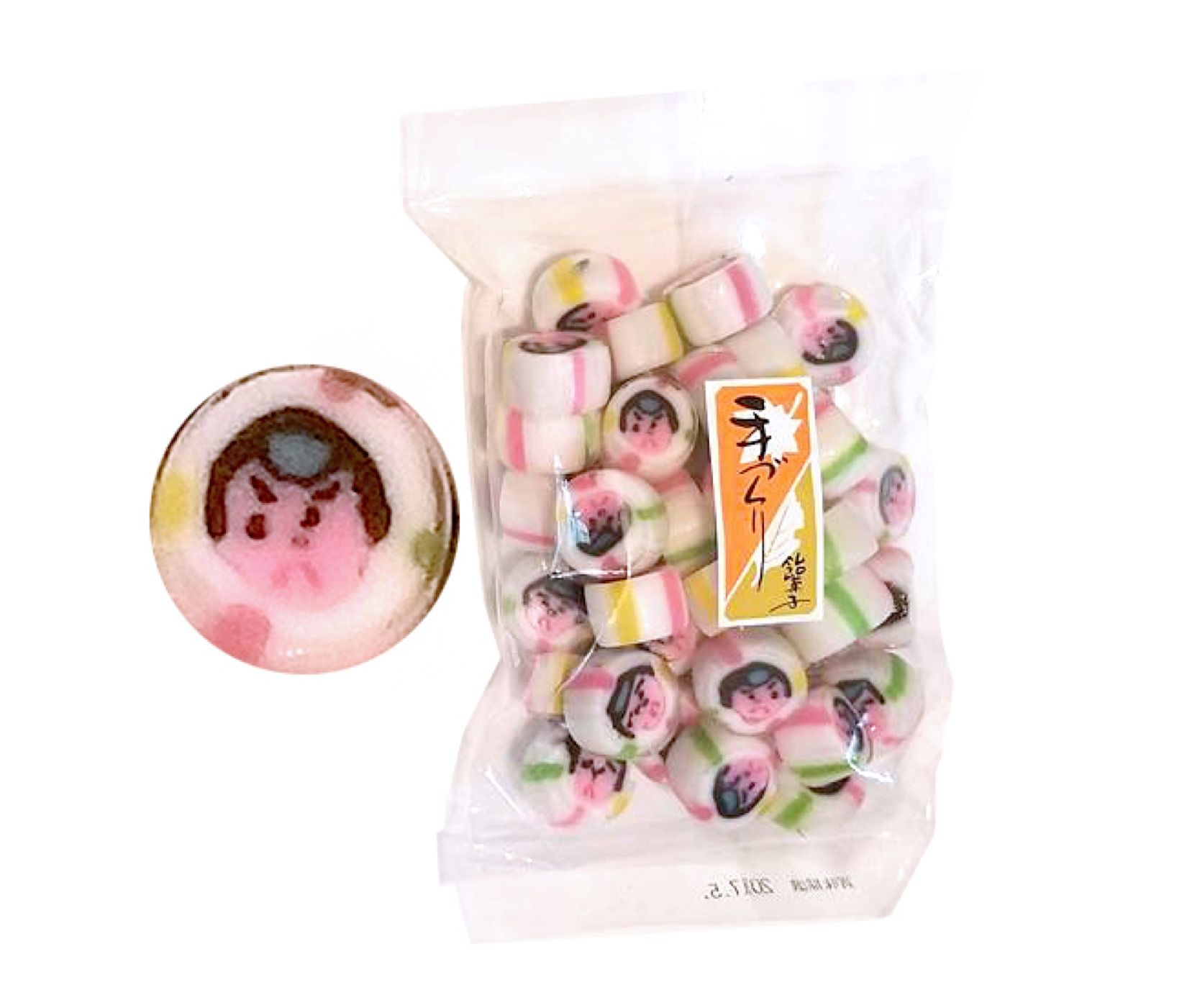 I now learn that both packets feature Kintarō, translated as “Golden Boy,” a character from Japanese folklore. He is a child with superhuman strength raised by a mountain witch, who wrestles animals or else befriends them.

Kintarō-Ame candies, which date back to the Edo period (1603-1868) are created using the ‘cane’ technique. Cross-sections are sliced off of an elongated cylinder to form multiple images, a method also used to make beads and strata-cut animations. “Kintarō-ame“ is now a Japanese idiom for things that are identical, the equivalent of “spitting image.” 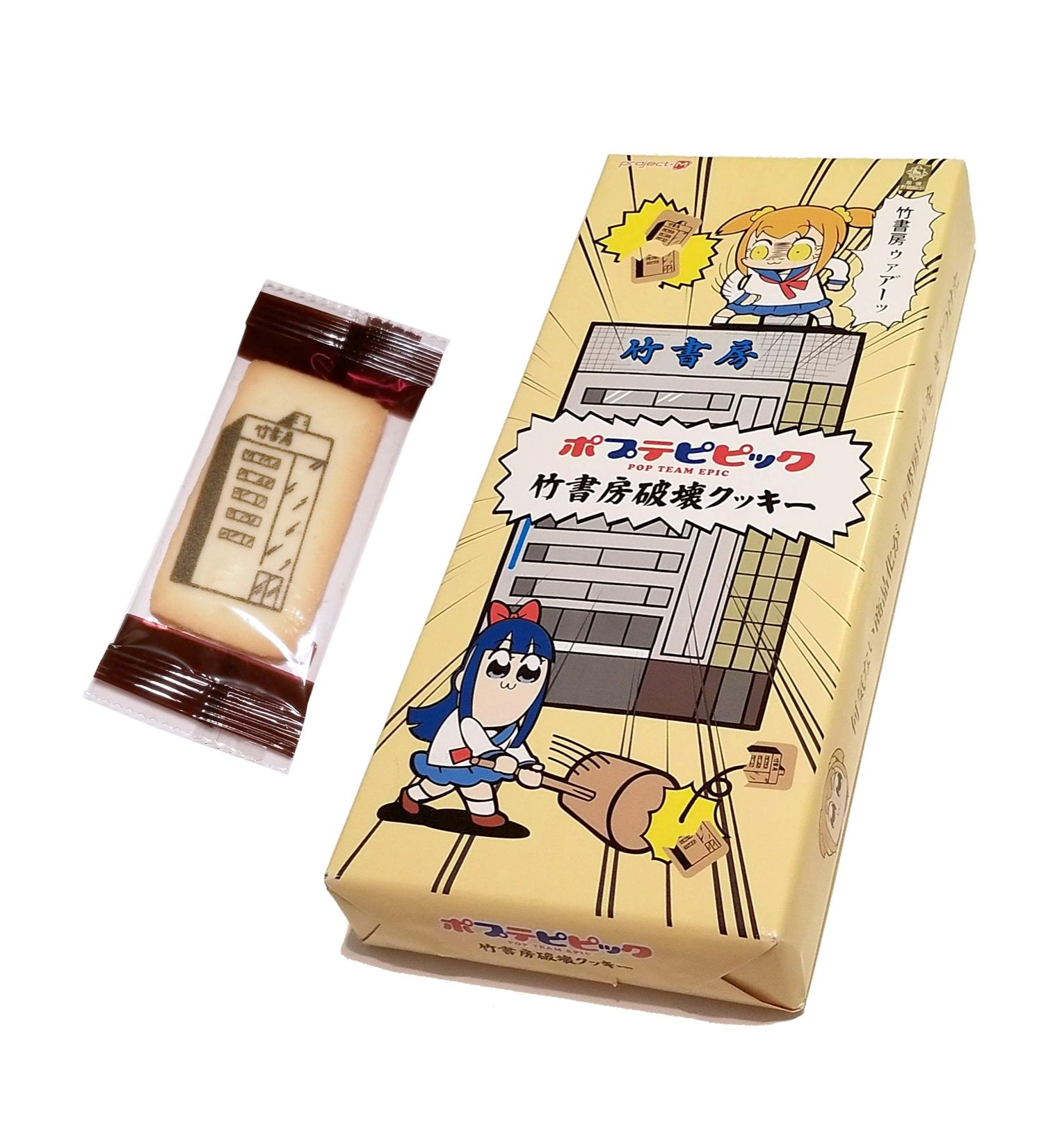 These cookies tie in with Pop Team Epic, a popular four-panel gag comic and anime adaptation that plays on tropes of Japanese entertainment. The cookies are meant to fracture into pieces, evoking the destruction of the headquarters of the comic’s publisher, Takeshobo. 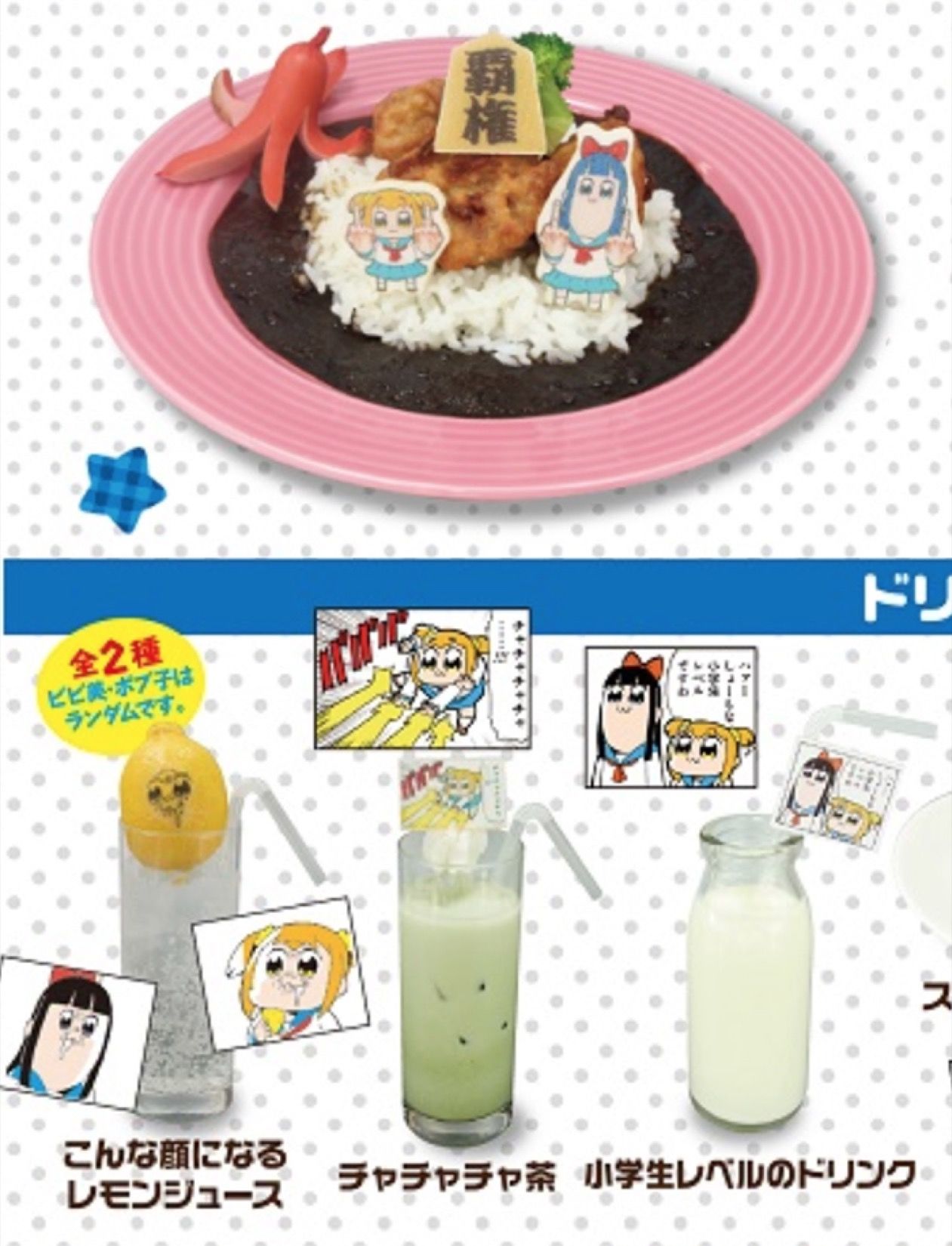 Menu items from one of the Pop Team Epic Pop-Up Cafes. Not pictured: the “Subculture Kuso-Onna Souffle Cake". 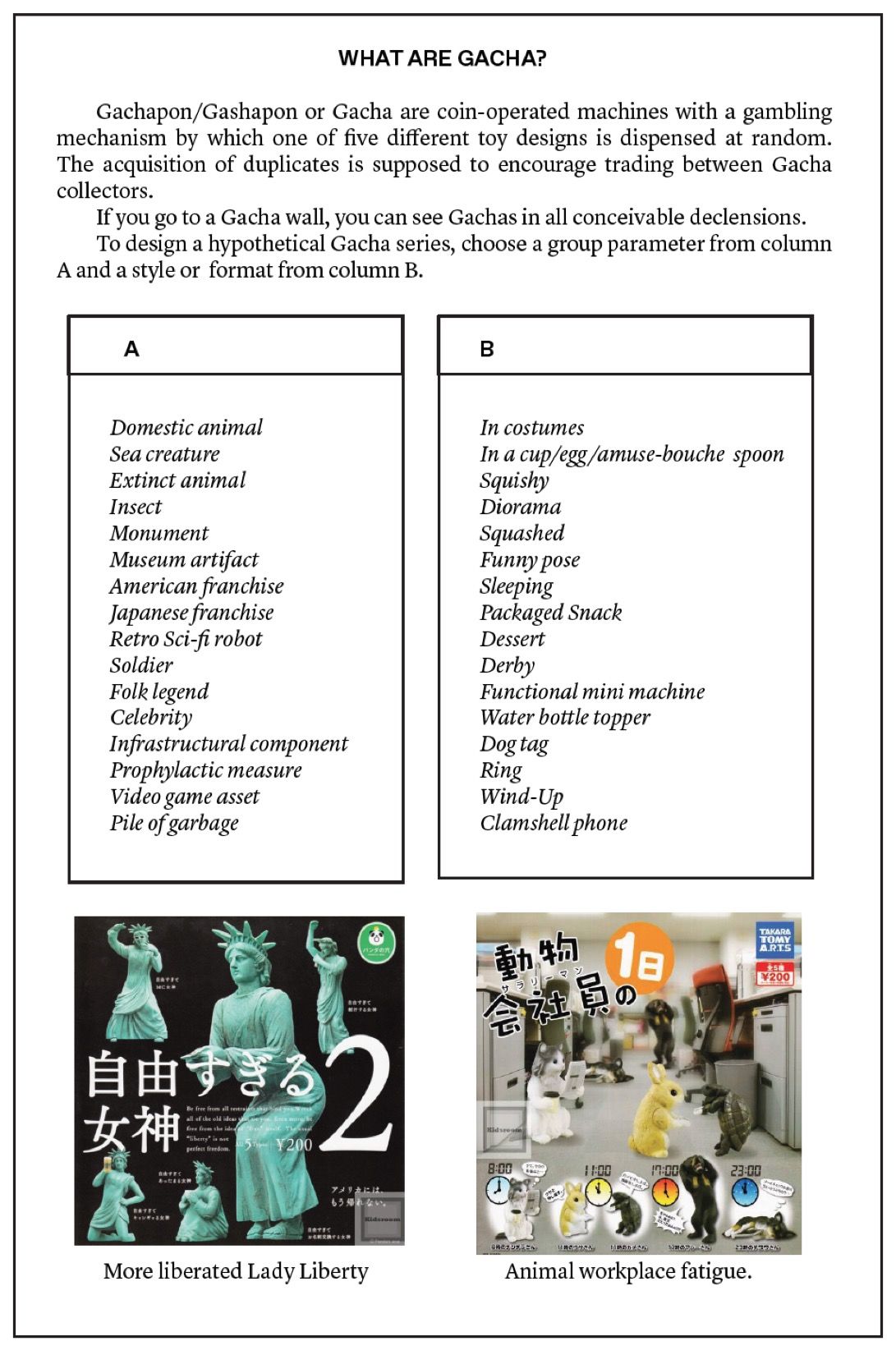 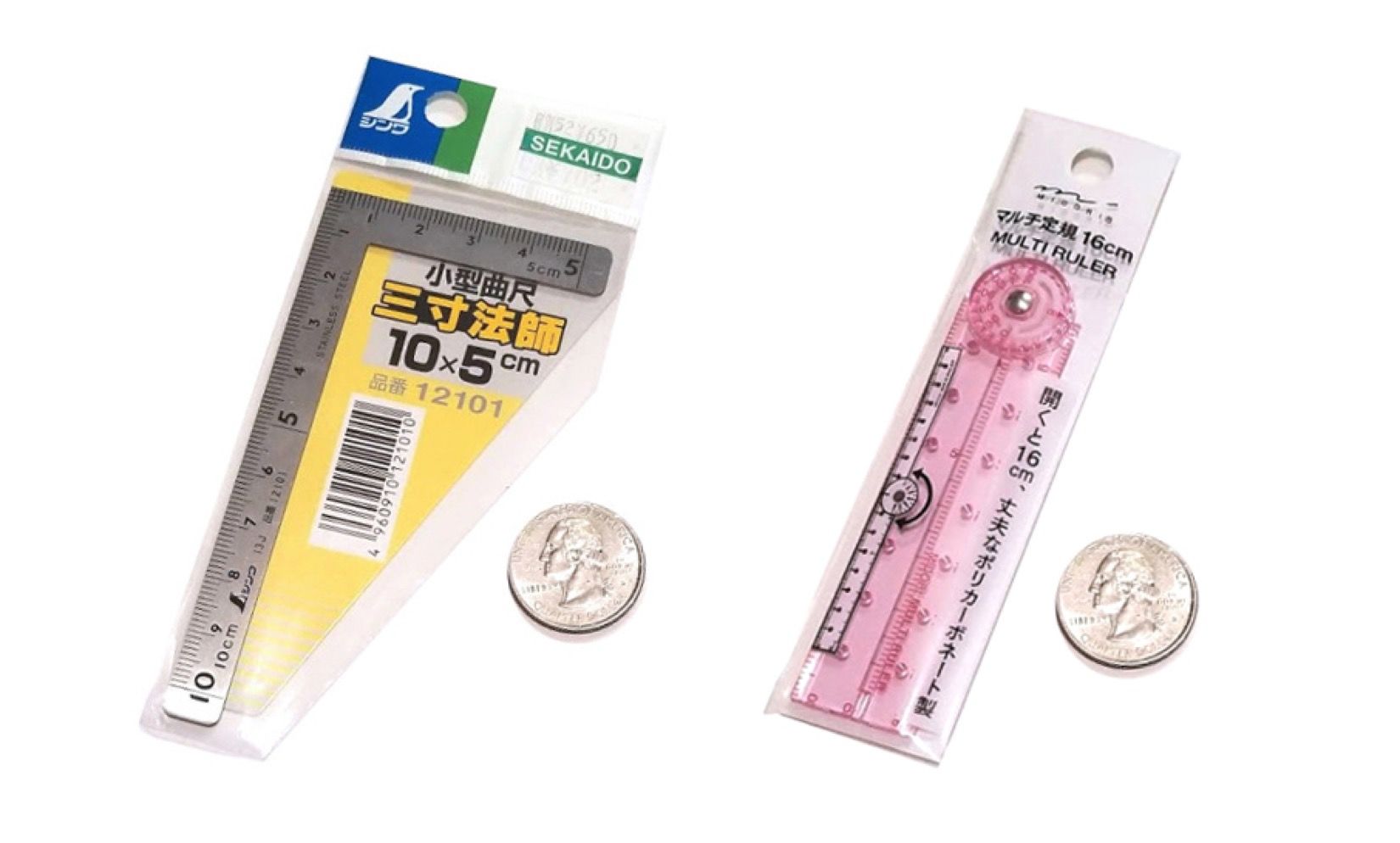 If there was ever an academic faction concerned with minis, one of the most contentious debates would be: are mini rulers actually mini at all? How can something be small-scale if its scale is technically fixed, consistent with the full-size version of the object? By this logic, mini rulers are not mini, just inefficient. 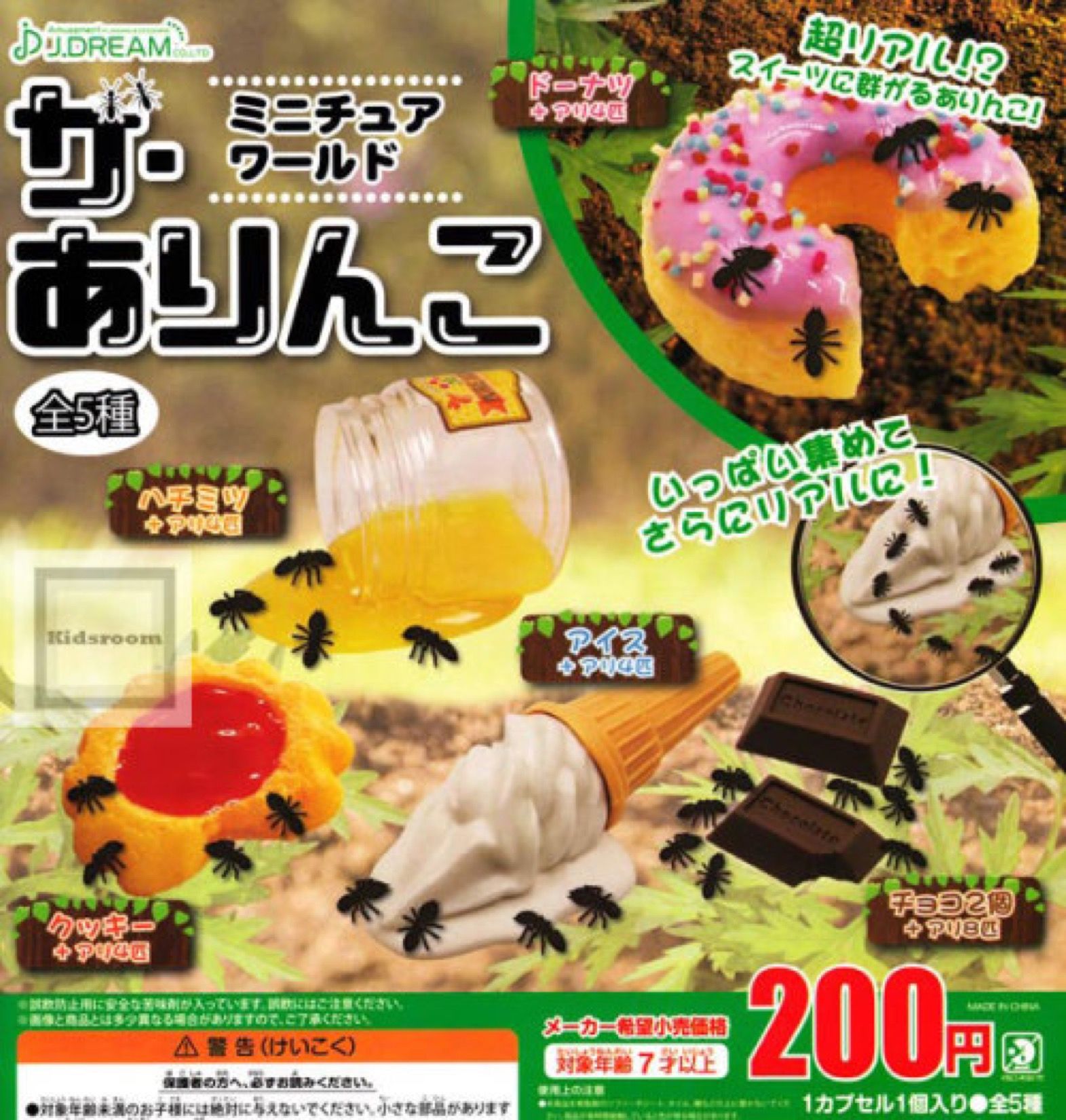 The ABC (Already-Been-Chewed) aesthetic of these gacha also recalls the Apple logo...(Now imagining if the Apple Logo was redesigned to have discrete bite-marks taken out of it. Would probably be protested by its iPad-loving baby fanbase.) 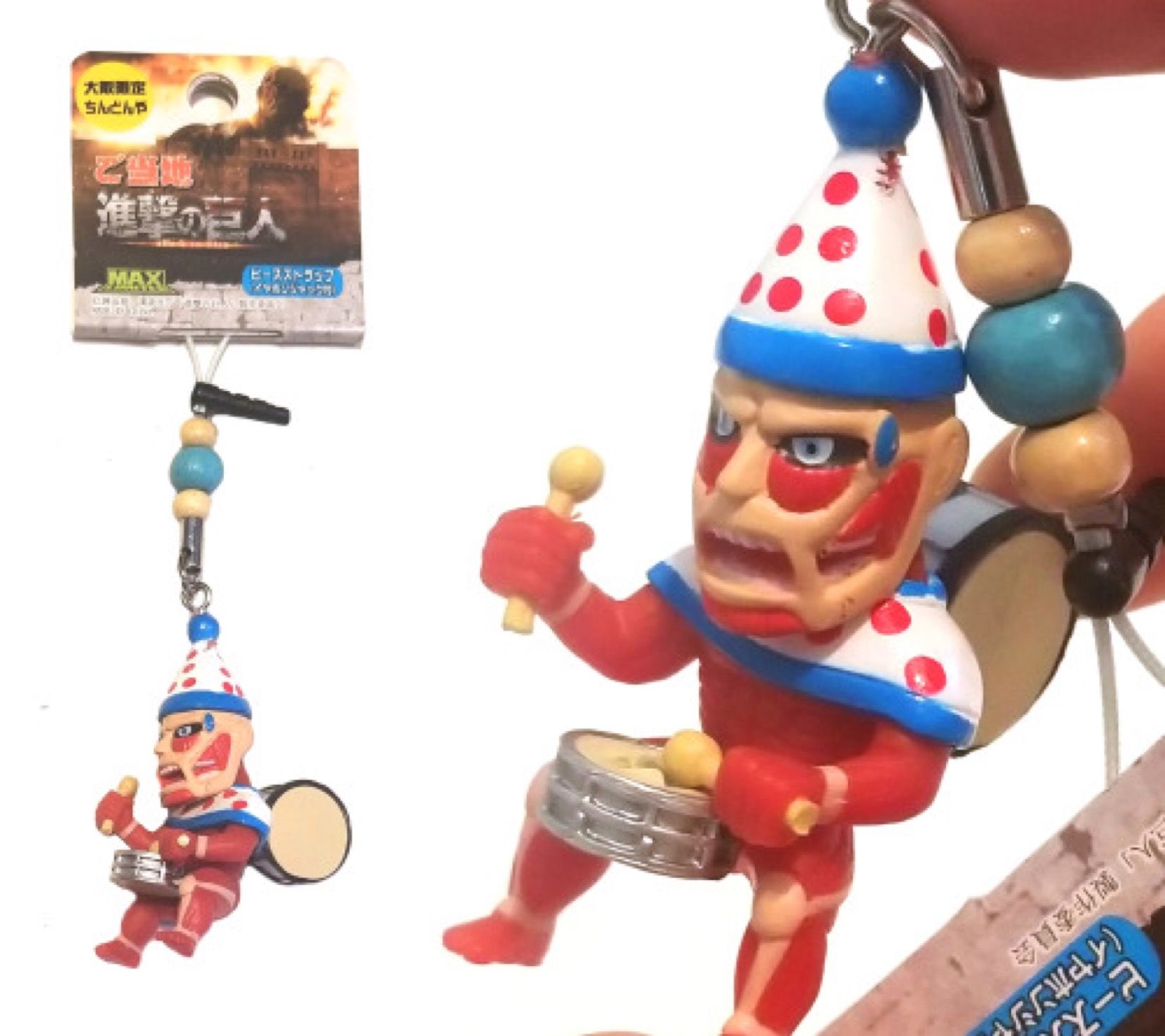 This flayed clown, which I relate to on a personal level, turns out to be the amalgamation of an anime character and a local mascot.

Attack on Titan is a widely popular manga and anime about humans living in a walled city and getting constantly assailed by skinless, cannibalistic giants. Kuidaore Taro is a puppet-clown man, merchandized to the hilt in Osaka souvenir stalls.

He was originally the mascot of a restaurant called Cui-Daoré and became nationally famous in 1989 when, in a display of grief over the death of Emperor Hirohito, his red-and-white stripes were changed to black-and-white.

(This reminds me also of this black-and-white Where’s Waldo gacha I saw. Much more difficult to find in monochrome..) 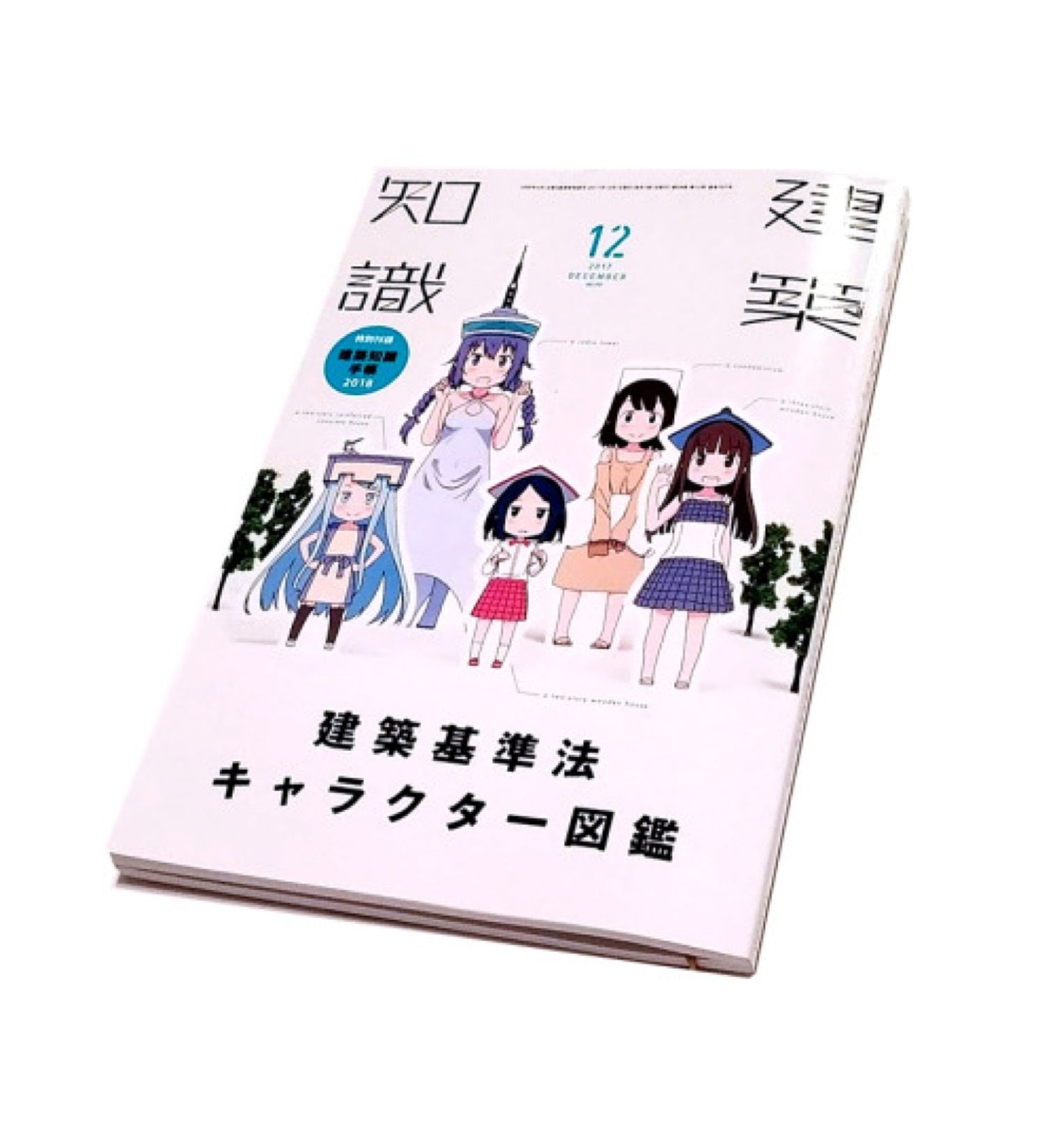 Technological developments structure the course of art history (more saturated paint pigments leading to impressionism, peer-to-peer networking leading to rabies pride stimboards, etc.), but the opposite is also true. The use of orthographic perspective in diagrams made it easier for engineers to record the specifics of mechanical workings and pass this information on, and in this way, illustration facilitated industrialization.

I interpreted the girls in this architectural magazine as an anthropomorphization of diagrams themselves. 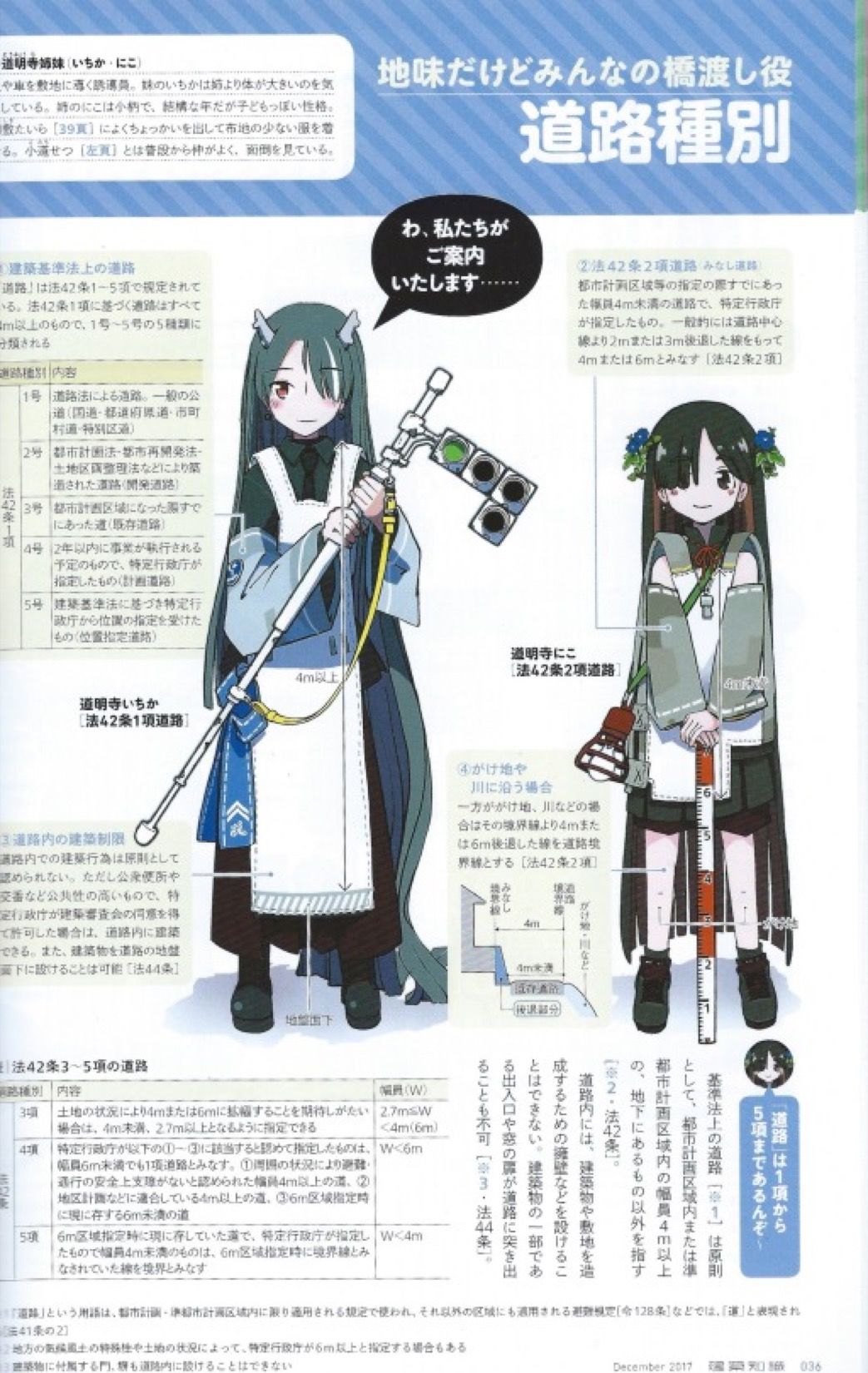 They brandish tape measures or land surveying instruments, and the proportions of their aprons correspond with egress plans. Measure is the man of all things… 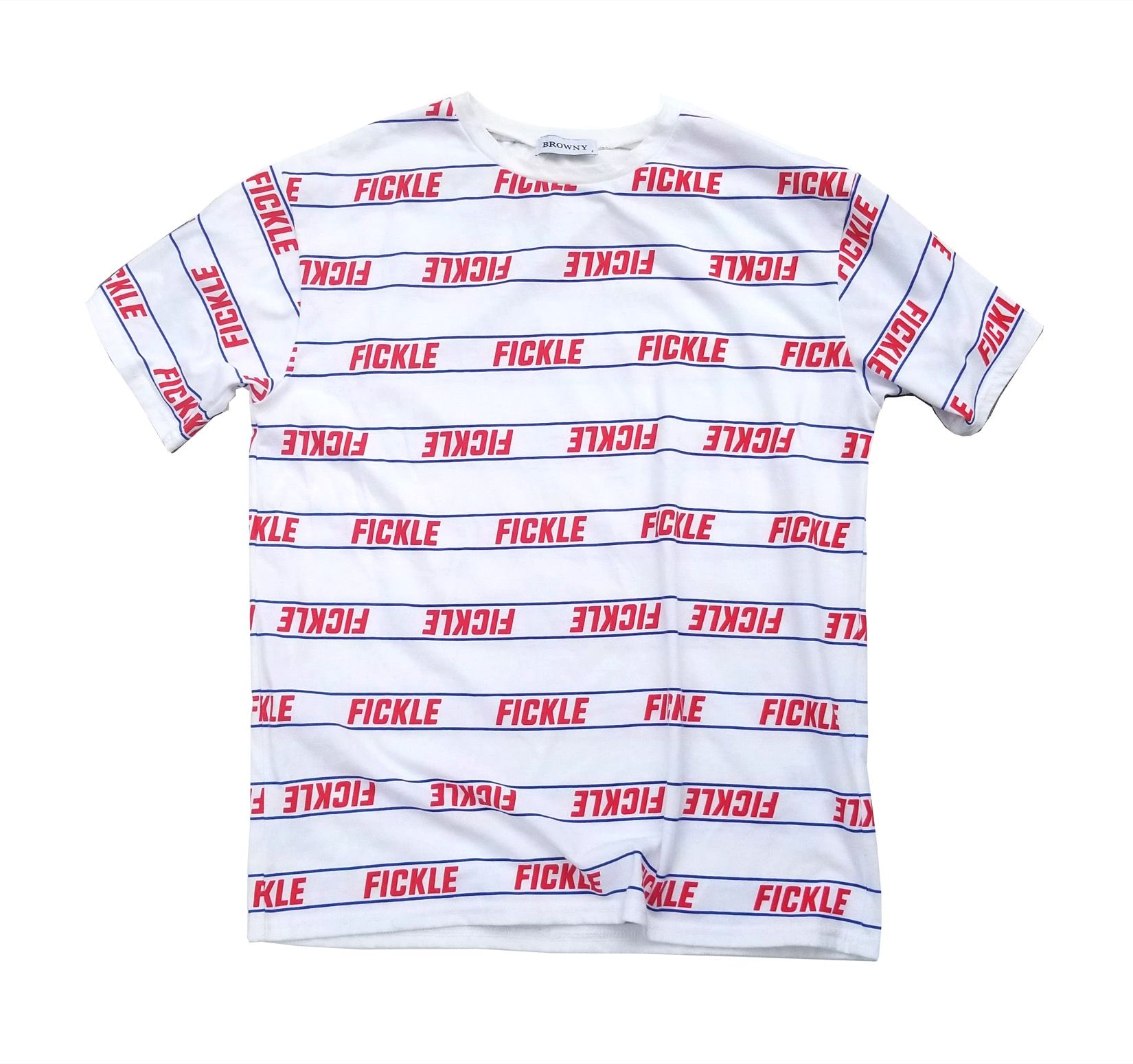 In many people’s eyes, this shirt indicates moral deficiency. But I see fickleness as a form of agility.

I’ll let this hat be my coda… 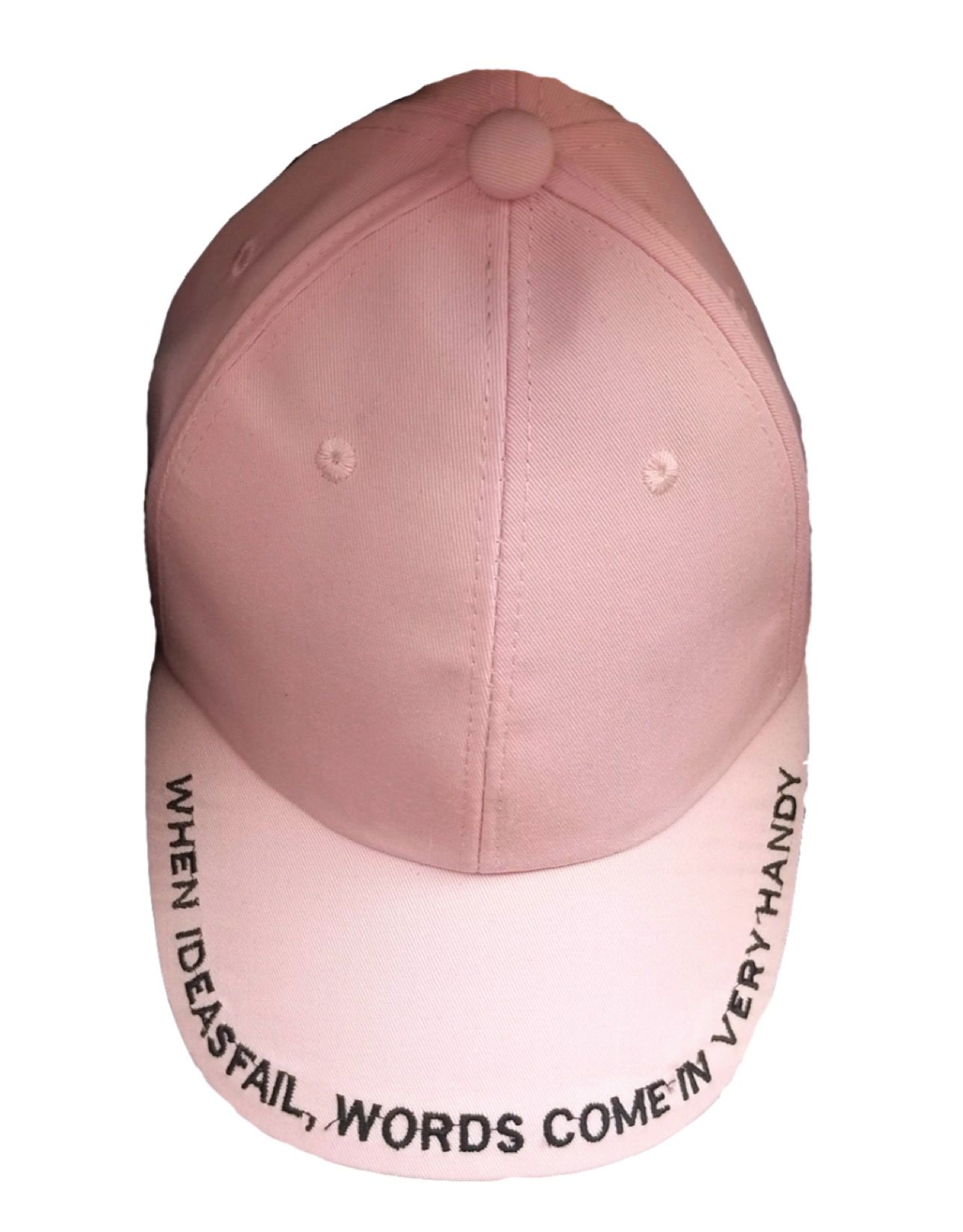