The Life of Lorimer 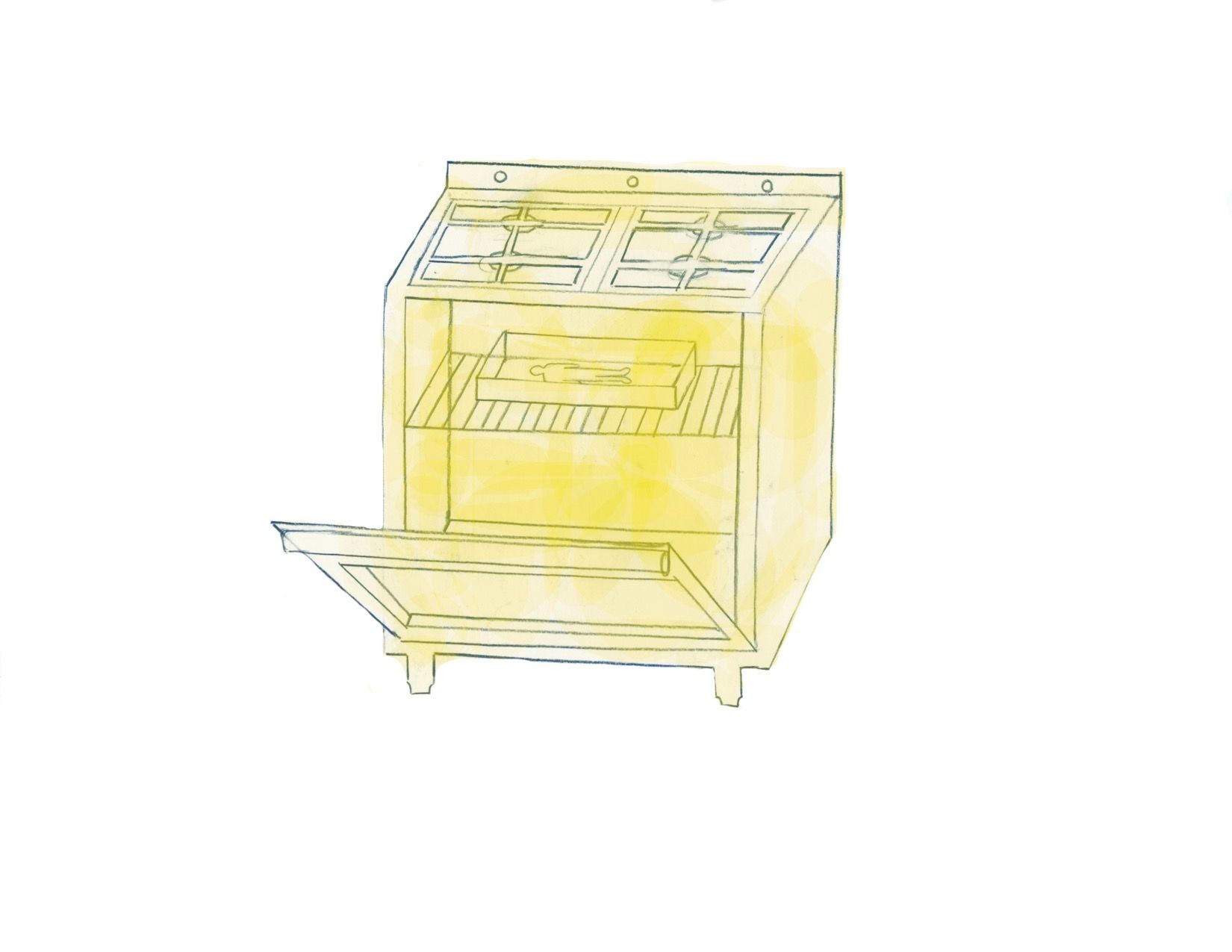 Lorimer was a zesty youth. His baker made him with lemon rind and bitter vanilla. The lemon was shriveled and white-yellow and the baker found it at the bottom of his garden, hidden behind a magnolia bush. The crops had not been fruitful that year, the rain infrequent and the soil cracked. Prices of fruit were astronomical, much higher than bonbons and infinitely more than laptops. Across the globe, scurvy was rampant. The lemon was precious.

The baker carried it back to his kitchen, cupped in his hands. There, with long deft strokes of his paring knife, the skin gave way to gloop and ooze. The baker tasted the zest and shuddered. It was almost unbearably sour. These days you had to make do with what little there was, so he chose to use it anyway. He stuck the mold in the oven, set the timer for 158 hours and walked away, preparing for the next recipe. In the oven, nestled in the folds of batter was a tiny seed. It glinted. The seed the seed the seed the seed the seed a pip a seed a lemon pip a seed.

In the days following Lorimer’s birth he could barely see, like a newborn puppy. This didn’t stop him from walking, and by day two he would toddle solemnly around the house. His mother, Marianne, was concerned about this, fearing for her furniture and her new son’s soft skull. Marvin, her husband, attempted to assuage her fears over breakfast.

“Darling,” he said, peering over the top of his newspaper. (The headlines were particularly bad that day: “GMO Children: Risky Business?”) He glanced at his son. “Lorimer’s fine! The doctor said he’d start seeing any day now.”

“I know, I know.” Marianne sighed. “I just don’t understand how he walks so confidently without seeing.”

“It’s a sign he knows where he’s going in life! We have a little prodigy on our hands.” Marvin did not believe this. There was little he did believe because he often thought the world was murky so he felt he was allowed to lie about his thoughts frequently.

The next week blue invaded the whites of his eyes. The doctor had been right. Lorimer was perfectly healthy. He didn’t have a heartbeat though. The doctor said this was an irregularity some GMO children experienced. It wasn’t an issue if the heart didn’t fully form. There wasn’t enough research done to know if it was an issue.

By the time Lorimer was four, he would hoard whatever shiny things he could find. Pennies, earring backs, nails, razors. He would store them under his bed, and whenever his parents couldn’t find something, they would have to look through the piles of sharp shimmering things. He liked how they glistened and would crawl under the bed to stare at them, polishing each piece individually with an intensity he reserved for listening to bird calls and bike riding.

By the time Lorimer was six, he decided that he would only eat yellow foods. Bananas, egg yolk, squash, cheese, mustard, corn. Never lemons though. Never ever lemons. This annoyed Marvin. He thought yellow was the ugliest color, reminiscent of medicine and urine. Marianne said it was cheerful.

By the time Lorimer was ten, he had blonde curls that fell down to his waist. They were beautiful and bright. Whenever Marianne would try to cut the curls he would hold her hand in his, and squish and squirm until she felt her fingers start to cramp.

By the time Lorimer was twelve, he was enrolled at the local secondary school.

One day when he was leaving home ec (his favorite class), Lorimer saw a group of older kids bullying someone. The child was huddled on the pavement, his knees and arms craning towards his head as the other kids kicked him. With each kick came an insult.

Green blood, cooked in an oven, colored with dye, smelled of chamomile. It ran towards Lorimer.

A teacher ran outside and yanked the boys off the bleeding child. “Someone!” He shouted. “Bring him to the nurse!” He grabbed two of the bullies by the ear and herded the rest to the principal’s office.

Lorimer kneeled down next to the boy. The hurt kid was large and soft with ginger hair. Lorimer looked at the boy, half alive, half on the pavement. The blood on the pavement enticed Lorimer. He swirled his hand in it and lifted it to his mouth, sucking each finger clean, until his own flesh was pink and puckered. The pain was warm and the fear sweet and Lorimer felt a fleeting wholeness. A wholeness that started in his chest and encompassed every limb and made him shiver all over.

That night, after blissful hours in fullness, going to bed in elation, Lorimer started sweating in his sleep. When he woke up his mind was restless and he cramped all over. His mattress was damp and reeked of citrus. Lorimer crept into the kitchen, his bare feet padding on the linoleum. He creaked open the fridge an inch. There, on a platter, were three chicken breasts with tiny black olives around them, left over from dinner. Lorimer dug his fingernails into the chicken and tore it into chunks. He crammed them into his mouth, primed with saliva, raw with need and yet his stomach still burned and his forehead sweat and the himness of him drained out with each breath. It made him miserable and mean and he ate and ate and ate until he gave up on the fullness he craved. He scattered the bones on the floor and slammed the refrigerator door shut because he no longer cared if his parents woke and he stalked back to bed.

By the time Lorimer was sixteen, girls started to notice him. They liked his smile and his quiet charm. They thought his eyes were deep, glacial even. He was pretty enough to be inoffensive to young girls, handsome enough to awake feelings. They thought he was sensitive. He spent time with himself, he knew who he was.

She decided to ask Lorimer to be her boyfriend during geometry one day. She passed him a note, and decorated it with little hearts. He passed it back, telling her to meet him outside the playground after school. The rest of the day passed in a blush haze of hormones

At exactly 4:09, Lorimer sat on the swing set waiting for Gwendolyn. He had picked up smoking clove cigarettes. It made him feel older. He blew rings into the air and languished in his own presence.

At exactly 4:11, Gwendolyn appeared. Her knit hat was yanked down to her eyelashes, and her scarf covered her chin and mouth. She was a small bundle with a glowing nose. Lorimer patted the swing next to him and so they swung side by side.

There was a rawness about Gwendolyn. She had been taken out of the oven a little too early. Because of this her teeth came out under-grown and too soft to do any good. So, the baker pulled them out, two at a time and fashioned her a set of shiny glass ones. They were sharp and sparkly.

They stopped swinging. This was the moment. Gwendolyn was ready. Lorimer let his hand twist its way up her coat before gently pushing aside her scarf. She had a plump bottom lip and a sweetly defined cupid’s bow. He pressed his lips onto hers. The world flipped for Gwendolyn, the pressure delicious. Her eyes fluttered shut. He tasted sweet but the cloves masked a rot that confused her. She opened her mouth and mildew and mold tumbled in, making her gag, closing her throat.

His hands clenched around her neck. She tasted of animal crackers and he bit and sucked and gnawed at her to get every flavor. He wanted that feeling of fullness. He wanted all of it. Lorimer felt glorious.

Her teeth shattered. Skin crumbled under his hands as he pulled at it. She was the mixture of her ingredients, nothing more than flour and egg yolk.  Dipping his hands in the goop he smeared it across his arms, across his face. He pressed his fingers, coated in the mess of her, into his skin. Pressed until it seeped through. Pressed until it coated his organs and warmed him. When he was done, had taken his fill, there was nothing left but broken glass and a wool scarf.

Lorimer felt so good. And then, about a week later, he didn’t feel good anymore. He began to get headaches and his chest burned. Marianne offered him Advil and Tums.

One Tuesday night, he hurt so much that he couldn’t be still. He stumbled into the bathroom and spit into the sink. It came out purple and he stared at it and then himself in the mirror. When did he get so sunken, when did he lose his color? He began to search his skin. It was cold and wet. With each touch, a clear slime came off him and webbed his hands. He struggled to remove his shirt, his fingers wet, grasping, trying, plucking at the buttons to his pajama top. Once off, he realized he hadn’t found what he was looking for.

At the center left of Lorimer’s chest there was a raised lump. It was roughly the size of a pea, as big as two finger tips pressed together. Webbing out from it were lines of gold and white, weaved into his skin. Bile tickled the back of this throat and he gagged. Juice flowed out of his mouth and into the sink. He bent over as the juice kept coming, sour and sticky all over the porcelain. It flooded the sink and coated the floor, hitting his ankles, hitting his thighs until he couldn’t stand anymore and gave in to the softness of the liquid. Finally, when there was no more, he coughed and from his mouth came a seed, blackened and drained. Together they floated, emulsified in the bile, perfectly spent. A seed.

His parents found him in the bathroom the next morning, preserved. His skin was pitted and his knees frozen at his chest.

Marianne cried for three days and four nights and then never talked about him after, never shed a tear. She wouldn’t say it but she felt a lightness at his death, a lightness she hadn’t felt since he was delivered to their house in the clean pink bakery box. By the time they buried him, he had grown so cramped, so poky, so miniature that he could fit squarely in someone’s palm.

The postmortem showed Lorimer never grew a heart. There was, however, a small almond shaped indent where it should have been.