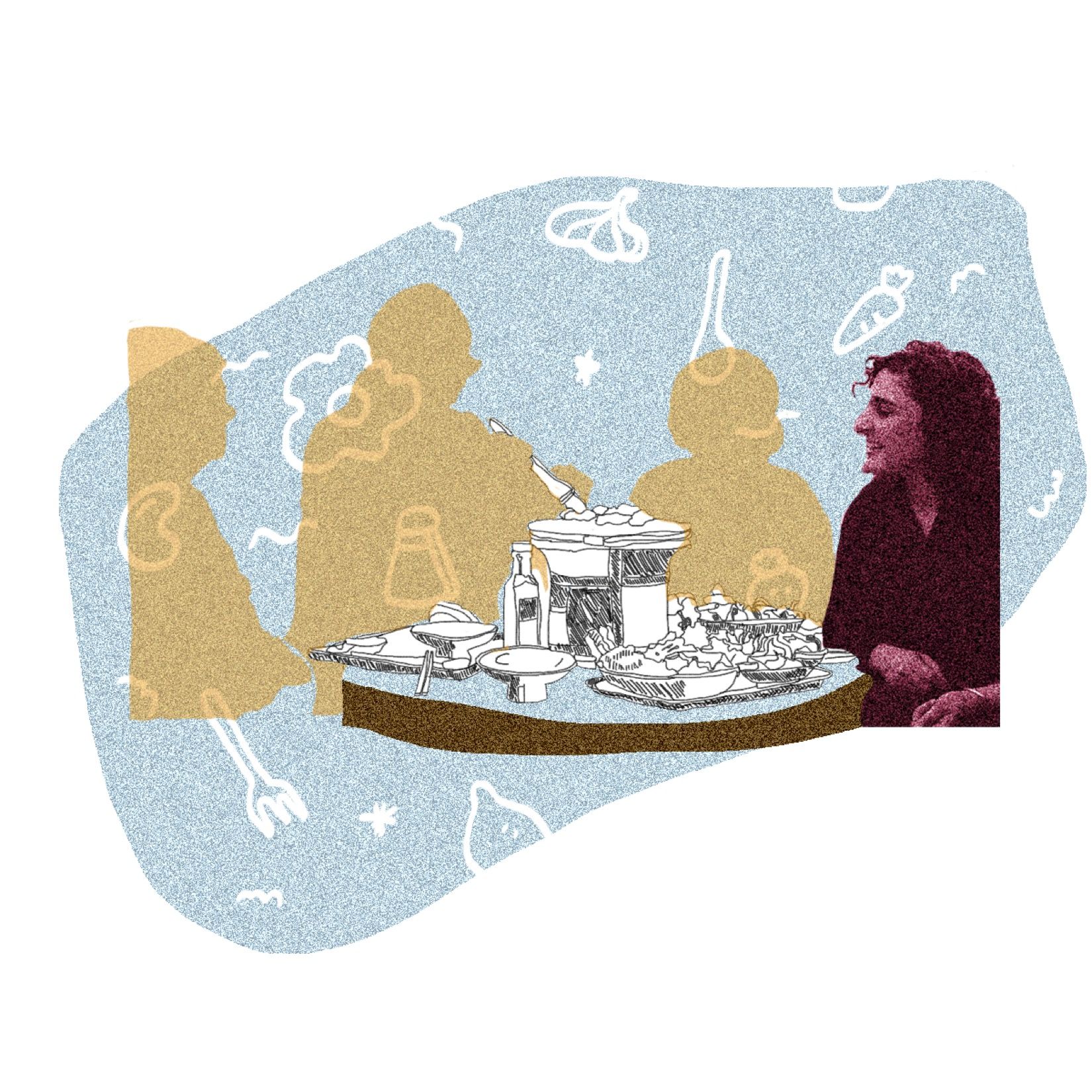 Being a foodie is most definitely entwined in my DNA. My mother famously recalls only eating noodles for about two months in her teens because her father was relentlessly trying to pin down the perfect recipe (the trick is to use duck eggs). Growing up between Hong Kong and the UK, and often away from my loved ones, mealtimes were and still are chances for us to intentionally spend quality time with each other. When I am home, every Sunday is reserved for my family: during the day, we have lunch with the cousins on my maternal side; in the evening, we go to the house of my 嫲嫲 (maa maa; dad’s mum) for dinner with the rest of his family.

My relationship with food has not always been particularly healthy or easy, however. Developing healthy eating patterns and rewiring my relationship with food has been a steep learning curve; but, surprisingly, learning how to cook has been a hugely impactful and therapeutic. One of the first meals I made for myself was a kale and rice bowl. Intensely nervous about overwatering or burning the rice, I carefully scooped it and the suggested water quantity into precise measuring cups. The recipe instructed me to add a little more water than necessary to the rice, so the kale could absorb something when I chucked it in towards the end. With my laptop precariously balanced on my tiny kitchen counter, I furiously Googled whether this would ruin the meal or not. Eventually, I surrendered to the recipe and did exactly as it told me. Well, not quite. I replaced the cheese mix with soy sauce, sesame oil and a fried egg. Now, three years later, I still make this meal and its various iterations regularly. Looking back, it is not a complex meal, nor was it actually that daunting, but it felt like a huge start. It showed me that even though I have no professional training whatsoever in food or cooking, I still know what I like, and eventually, how to suit my tastes.

The refrain that “anyone can cook,” as encouraged by the ghostly chef Gusteau in Ratatouille, still rings true in my ears. This is an idea that has been underscored by Netflix’s new docu-series Salt Fat Acid Heat. The show is based off the book written by Iranian-American chef Samin Nosrat, who also hosts the show; it centres the idea that the four eponymous elements pervade all cooking, cuisines, and dishes. The book and show offer guidance as to how these elements can be used to elevate simple home cooking. We are taken to four different regions in search of these four elements of cooking in the show, paying homage to how they are used globally. It is split into four episodes, each taking on a different element and region—“Fat” in Italy, “Salt” in Japan, “Acid” in the Yucatán and, last but not least, “Heat” in California.

The show contrasts with the typical American travel documentary food show, where we see the hosts, usually white American male chefs, speaking to other chefs whose cuisines and delicacies will cater to white Westernised tastes. Many of the people Nosrat brings onto the show do not have official positions within the culinary world, yet everyone is treated with the same respect, and is given a title. Take, for example, Lidia, titled “la nonne,” who teaches Nosrat how to make traditional Ligurian pesto; or Rodrigo, who shows her different varieties of salsa at a local taqueria and is given the endearing title of “salsa expert.”  These titles drive home the idea that everyone has knowledge to share, and that we don’t have to be experts to cultivate a taste. Nosrat places these figures in comparison with the authoritative stereotype of the trained, rugged, ‘I’ve worked in this industry for over a decade’ white male chef, and, ultimately, encourages us to try. The gentle ‘you can try again tomorrow’ are the show’s closing words, which is an idea that certainly persists throughout the show.

While Nosrat does speak to other chefs, she often engages with people who make the basic ingredients for various cuisines. In the second episode focusing on salt, Nosrat travels to Shodo Island in Japan, where she encounters Yasuo Yamamoto, the owner of Yamaroku Shoyu, a traditional soy sauce brewery. Here we see shots of Yamamoto speaking to the microbes in the barrels of to-be soy sauce, encouraging them to grow. Yamamoto explains his desire to keep the traditional Japanese method of brewing soy sauce alive despite the fact that “less than 1 percent of soy sauce production is done this way [in wooden barrels].” Nosrat also learns the art of miso from a local woman named Kazumi, the “miso master.” Kazumi hand-makes her own miso from a recipe passed down by her grandmother. We see Nosrat and Kazumi using a suribachi and surikogi (the Japanese equivalent of a mortar and pestle) to crush the steamed soy beans, and adding other ingredients like water and koji (fungus). Eventually, these ingredients form balls of miso paste that are flattened by hand and rocks and then left for about two to three years to ferment.

Nosrat gives these methods enough time and space to allow these experts to truly delve into their practices. She also asks questions throughout the show, highlighting the immense care, respect, history and labour that goes into the production of such ingredients. In such a consumer-driven world, it is radical to see such devotion, energy, respect and curiosity given to ingredients and food itself. With the rise of New American cuisine, which largely samples flavours from other cuisines and regions and tailors them to suit white American tastes, it is exciting to see and learn where these now-ubiquitous ingredients of a globalised world and New American cuisine come from. Also, in comparison to most travel documentaries that try to see ‘a lot’ of regions, in Salt Fat Acid Heat, we get to see a lot of a little and we are still left wanting more.

That being said, the likelihood that the show’s audience will use anything produced on a specialised scale is rare. Perhaps, the show offers a somewhat romanticised view of what food production is actually like. But with that in mind, it still reminds us that the food we consume has a source, an origin and people who dedicate much time to its crafting. Nevertheless, this message is given a platform through a corporation––Netflix––whose ultimate goal is to make money by catering towards a largely middle and upper-middle class audience.

The show also sheds light on women in the culinary realm. Nosrat learns how to cook a steak with Amy Dencler, the restaurant chef at Chez Panisse, the renowned restaurant in Berkeley, California where Nosrat began her culinary career (by endearingly writing a fan letter). It is joyful to see Dencler so masterfully and effortlessly grill a steak, a realm of cooking typically associated with and reserved for men. Nosrat also does not shy away from portraying a more traditional realm of cooking for women—in the home kitchen. Nosrat’s mother features in the show and teaches her how to make tahdig, a traditional Persian rice dish with a crispy bottom. The theme of honouring tradition shines through in this tender moment, as we see the pair cook and work together with few words exchanged.

In a world where women’s bodies and relationships are, more often than not, policed and scrutinised, it is refreshing to see Nosrat eat with such enthusiasm and presence. She does not place herself in the trope of supermodel-turned-health-chef like Chrissy Teigen, nor does she fall into the trope of ‘guilty,’ ‘just-another-bite’ consumption like Paula Deen. And perhaps this is the most invigorating element of the show––the sheer, unbounded joy Nosrat has for good food and cooking. Her eyes pop when she tastes the melipona honey, her frequent sighs and exhales of “that’s so good” ripple through the show. Nosrat truly celebrates not only food, but also its process, highlighting the best things about it and the possibilities that lie in good food. Each episode ends with a meal she has made for a group of people, with shots of delight, enjoyment, and good company. While, of course, Nosrat attends to food with great care and precision, she makes evident that her “ultimate goal is to make people feel comfortable and taken care of, so they can just enjoy the moment. And maybe, eventually, pass that onto others.”

And this is something that I certainly resonate with. Three years on from my first kale and rice bowl attempt, I have tweaked the recipe to make it align with my own tastes and locations. If I am at home, I will stir fry 芥蘭 (gai lan; Chinese kale), which is readily available at the supermarket, with minced garlic and ginger. Seeing as I spend most of my time in the US, however, where such ingredients are less common, I chuck kale in a sizzling pan of oil with minced garlic and mushrooms. I enjoy engaging with my ingredients, dousing them in a fool-proof combination of soy sauce, sesame oil, chilli oil and sesame seeds. I attend to the vegetables, making sure to consistently fold and layer these flavours in carefully, so as to ensure that every corner of every vegetable gets a taste. Eventually, they wilt and the sesame seeds turn brown. With the hiss of the vegetables and the rice cooker jingle ringing in my ears, I realise that I have been entirely engaged in the making of this dish. With my spatula on call, I turn the heat up in the pan, add more oil, and crack an egg, watching carefully and avoiding splatters as it slowly bubbles and solidifies. Once I hear crackles and the egg’s orange orb is just shiny enough that even lightly prodding it with my chopsticks seems too risky (I don’t want the yolk to burst!), I take it off the heat and slide it into my bowl.

FLORENCE LI B‘20 wants you to come over for supper.