We Can't Live on Books Alone

The Fight for Graduate Worker Power 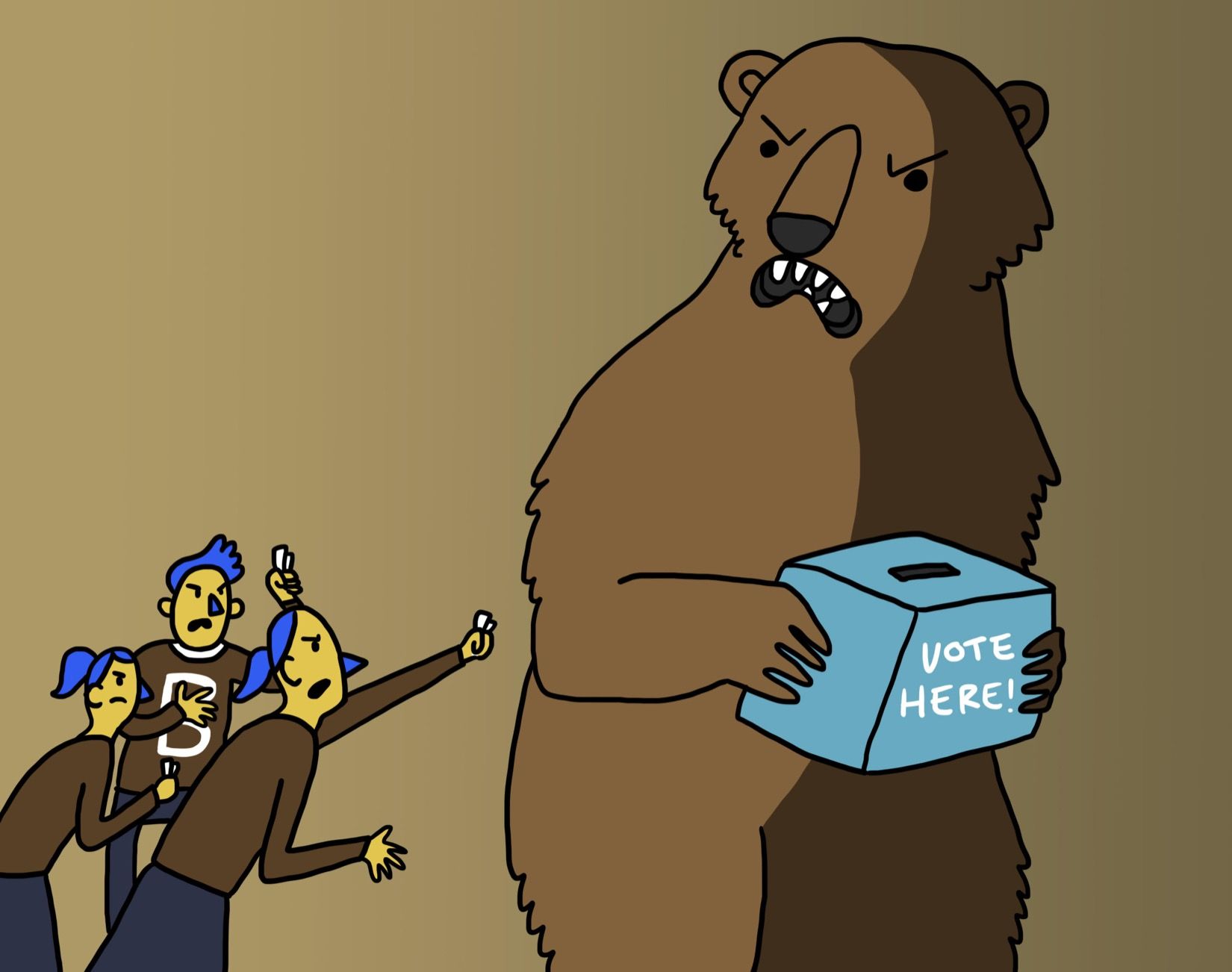 Brown University’s Graduate School recently bought two Facebook ads targeting their students’ unionization efforts, one titled “Do You Need a Union,” the other “Know the Facts.” The latter stated that, were graduate students to unionize, union dues would amount to $650 a year. The text was accompanied by a bright red dollar sign. These ads are the public face of Brown’s anti-unionization efforts. Meanwhile, students like Kaitlyn Quaranta, a third year doctoral student in Brown’s Department of French Studies who proudly displays an “I’m Voting Union YES!” pin over her heart, are the face of Brown graduate students’ efforts to unionize.

The push by graduate students to unionize at Brown has largely been taken up by Stand Up for Graduate Student Employees (SUGSE). Quaranta, who is a member of SUGSE, told the College Hill Independent that she joined because, while Brown “has been saying time and time again that grad students are just students” she and SUGSE “want to be recognized for the work that we do for the university. We are doing the teaching and research that allows the university to run.” Indeed, as Quaranta conducts her own research, she simultaneously teaches Introductory French, requiring her to plan classes, teach lessons, and meet with students during and outside of office hours. “You’re that main person who a student goes to,” she told the Indy, “It is a lot of work and it sometimes can cut into the time that I need for other things—my research, for example.”

According to the website College Factual, instructional graduate assistants are responsible for approximately 31 percent of the teaching done at Brown. In doing this kind of professional work, they have taken on the responsibility of creating syllabi, developing book lists, grading papers, meeting with students, giving lectures, and advising, which for many grad students is required as part of their programs. They do all of this while conducting their own research and composing dissertations, projects that can require years of intensive work. They are students of the university who have come here to gain experience, yet, as Quaranta illustrates, they are performing the duties of employees. And, as workers, the graduate students know they deserve to be compensated for all that they do.

SUGSE hopes that, if graduate students at Brown unionize, they will be able to collectively bargain and define their rights as employees of the university. SUGSE is affiliated with the American Federation of Teachers (AFT), as are similar unions at other universities such as Cornell, University of Pennsylvania, Princeton, and more. By affiliating themselves with the AFT, the second largest higher teacher’s union in the country, SUGSE is gaining the backing they need to stand up for their rights.

Unionization has the potential to greatly improve the lives and well-being of graduate students at Brown. While the University affords them some benefits like health and dental care, graduate students often feel that administrators make decisions behind closed doors without consulting the graduate students who will be affected. As Quaranta told the Indy, “We’re fighting for things like a say in our health insurance, additional support for grad parents, support for international students, a fair grievance procedure, transparency in payscale, and work expectations.” Specifically, they seek childcare for the children of grad students as well as an affordable healthcare plan that covers dependents, wage increases, and additional support for international students. The only way that these demands will be addressed, however, is through a contract that follows unionization.

One important issue outlined by SUGSE is that of fair grievance procedures. As of now, without a union, graduate students facing an issue regarding sexual violence, interpersonal harm, or discrimination by a faculty member or administrator must stand up to the University independently. A union, in contrast, would allow graduate students facing one of the above issues to collectively bargain. The American Federation of Labor and Congress of Industrial Organizations defines collective bargaining as “the process in which working people, through their unions, negotiate contracts with their employers to determine their terms of employment, including pay, benefits, hours, leave, job health and safety policies, ways to balance work and family, and more.” The power to collectively bargain would provide grad students with necessary backing as they move forward with complaints. This is especially valuable in incidents of sexual harassment or assault. Because Brown’s Title IX office is still part of the University administration, “It still falls under this particular power structure and it’s not independent of it. It’s difficult for it to really execute the justice that the law promises,” Kay Thompson, a SUGSE organizer and third-year PhD student in the Anthropology department, told the Independent. Unionization would give victims of sexual misconduct more of a platform to stand up against perpetrators outside of the power structure defined by the University.

According to Thompson, over the past few months, SUGSE has gotten a sense of graduate students’ grievances through “very informal conversations where we go visit folks in their offices and chat with them about what their working conditions are like, find out what’s important to their experience at Brown, find out what are things that would make it better.” Then, they began “moving folks to action.” Thompson points to a “rally to encourage the university to finalize the pre-election agreement” and “sticker and button days to spread awareness” as successes. And, to galvanize excitement about SUGSE, the group screened the film Sorry To Bother You, because, according to Thompson, it shows “what collective action can look like in a workplace.”

Despite these efforts, not all graduate student employees are supportive of the efforts to unionize. In a November 7 Herald op-ed, a group of graduate students allege that members of SUGSE have been overly hostile to the University administration, which they claim to be a “trustworthy support system” that has provided sufficient benefits for graduate student employees.  They also characterize SUGSE as having “ignored the rights of underrepresented groups.” But in conversation with the Indy, Thompson was adamant that SUGSE is “an anti-racist, feminist group has a lot to contribute to issues that are of concern to minoritized grads.”

Many administrators have also pushed back against unionization, consistently invoking the notion of the “mentor-mentee relationship.” As Provost Richard Locke wrote in a Letter to The Editor in the Herald, “While we recognize and value the work our graduate students do as teaching and research assistants, our principal relationship with our graduate students is as students. This guides how we admit, recruit and train these students.” This characterizes the role of graduate students as here to learn and train to be professors, in turn diminishing the teaching they do as only a part of the process that helps them reach the status of PhD rather than a form of real employment. William Keach, professor of English at Brown, on the other hand positions them as educators. “I would say they’re functioning as teachers at Brown and I think on the whole they do a very good job,” he told the Indy. He went on to say that “the supervision they get when they’re in that type of role from the faculty in no way compromises the reality that they are performing important teaching work for the university and deserve to be regarded as employees, insofar as that’s what they’re doing, along with writing dissertations in which they’re in the role of a student.” Furthermore, to position graduate students as mentees or students before employees is outdated, because it relies on the overturned NLRB ruling stating that graduate students are only students. Now that graduate students can legally be considered employees per the Columbia Decision, to ignore their role as such disregards their rights as employees.

As efforts to unionize increase at Brown, the University has matched them with resistance. Brown administrators insist that they are following whatever the federal ruling states, which shifts the role of graduate students depending on which political parties are in power. Under President Bush, the NLRB decided that graduate students only existed as students, however, under President Obama, this was overturned. The definition of graduate students is emphatically partisan; Trump proudly diminishes worker’s rights and is aggressively anti-union. When Brown insists that it is just complying with the rules, it cowers behind Trump-era policies and prioritize their own corporate interests over those of the workers who keep the institution running. Brown recently hired a law firm, Bond, Schoeneck, & King, known for defending anti-union businesses. The firm is currently also representing the city of Watertown, NY as the city tries to deny firefighters pay for the out-of-title shifts that they worked as captains. The hiring of this anti-union law firm is a clear signal from the University that it is gearing up for a fight against unionization in the case that graduate students do vote “Yes.”

In a Herald op-ed article published on October 15, Provost Richard Locke claims that SUGSE has not honored the pre-election agreement, according to anonymous grievances made against the group. He writes, “The graduate students who wrote complained of union organizers making blatantly false claims and employing tactics of harassment and intimidation.” grievances made against SUGSE should be reported to the American Arbitration Association, who is overseeing the election. As the organization’s website reads, “The AAA provides all stakeholders—union officials, employers, human resources executives, attorneys—with an orderly, efficient, flexible, and constructive path to dispute resolution.” Brown’s decision to respond to grievances against SUGSE without involving the AAA disregards the necessary role of an arbitrator to level the playing field between a powerful institution (like Brown) and a dissenting party (like SUGSE). Instead, handling these issues within the University allows Brown to retain an unequal degree of power.

What’s more, Brown promises a “fair and free” election, but it continues to push back the date of the election—a move that, according to Quaranta, is meant to confuse graduate students. Whereas the pre-election agreement between SUGSE and Brown stated that grad students must notify Brown 10 days before their intent to file a petition and once that petition is filed the election must take place no more than 15 days after, an email from Brown sent on October 12 stated that the petition would be filed October 21, and the election is beginning November 14.

Worker solidarity is terrifying for institutions. “Brown really has an opportunity to live up to their stated vision or their reputation as being an inclusive university community,” says Thompson. “The great thing about having this election is that it’s a chance for all of us to hear grads’ voices and we’re going to make our voices heard loud and clear.” As graduate students prepare to vote on unionization of November 14 and 15, they have the potential to redefine their place within Brown. Says Thompson, “we’ve been working and organizing this for two years. And we’re ready.”