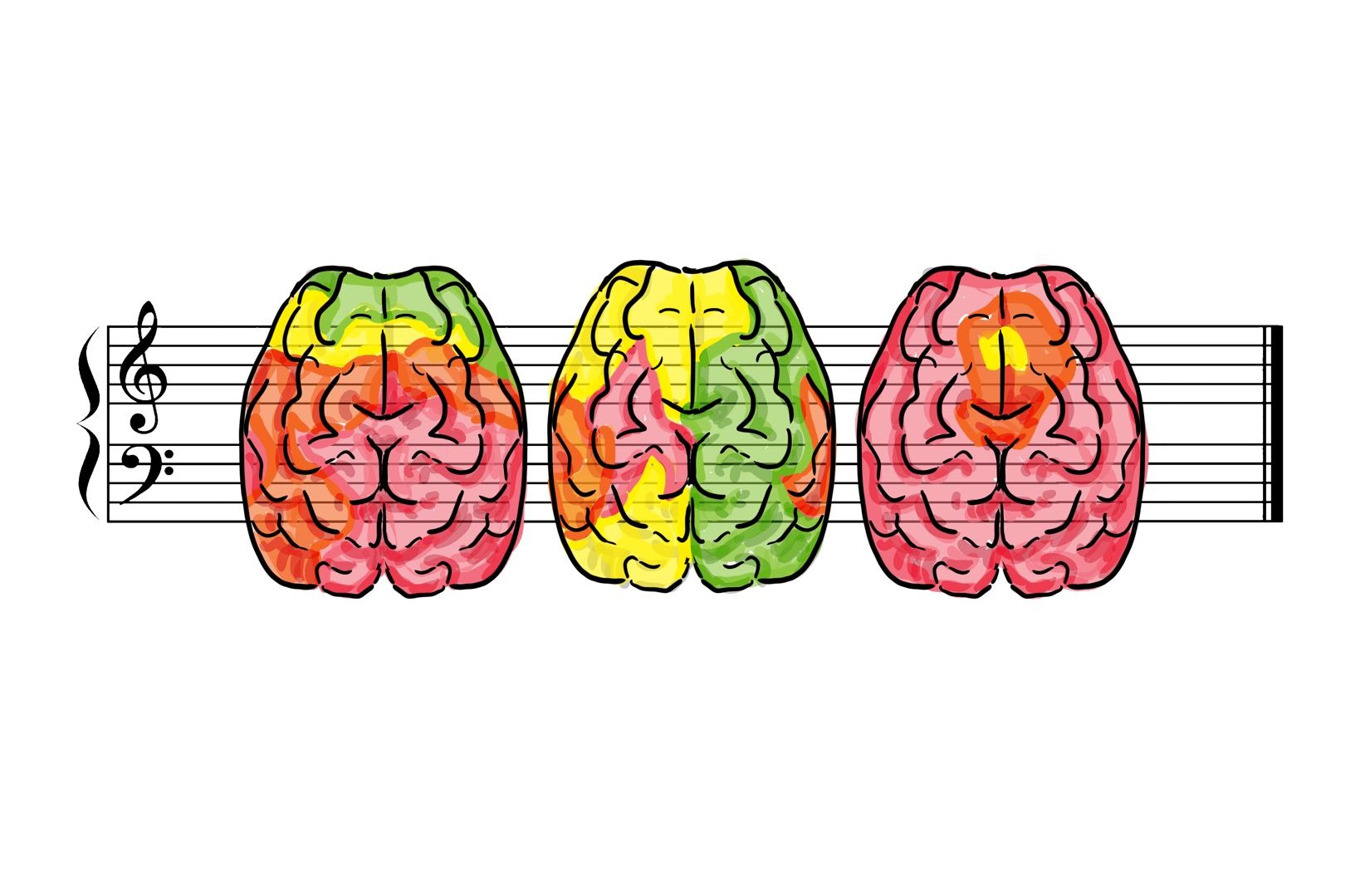 Scrolling through the sidebar of my Spotify, I find myself intrigued by what my friends are listening to in real time. Kpop, indie ballads, rap, and Billboard Hot 100 titles flash by. I myself can be found listening to Lorde’s new album Melodrama on repeat for the moody lyrics and emotional indie pop feels. In the past, people would go to concerts to listen to music together. Today, we can also sit alone in our rooms and listen to music in a shared virtual space.

This social web of music-listening speaks to the powerful impact of musical tastes on human connection. So where does our taste in music come from? According to neuroscience and psychology studies done on musical preferences, we are especially sensitive to music during our early teenage years due to the emotional development taking place during this time. Areas of the brain are rapidly maturing and building new connections in order to process emotions, so these years are especially crucial to shaping mental schemas, or frameworks of patterns that allow us to organize our thoughts and musical tastes. Our brains associate these salient early experiences with the music we’re listening to, so the music we consume during this time is often instrumental in determining our future tastes. The social dimension of music also begins to develop around this time—the desire to fit in with a social circle grows, so many people like to listen to what their friends are listening to. Music is a social signal. It becomes a marker not only of who you are to yourself, but who you want to be to others.

By your late teens, your musical tastes are mostly solidified, according to Dr. Daniel Levitin, a psychology researcher and professor at McGill University. Levitin attributes this milestone to changing neural plasticity, or the extent to which the brain continues to form new neural connections and reorganize itself. With this database of experiences, we build the aforementioned musical schemas that filter and shape the subsequent listening experiences we have. The music we hear once these schemas are in place is assimilated into the mental framework of neural connections, and we are no longer as open to different music. This phenomenon can be explained by Hebb’s law, which says that neurons that signal to one another consistently over time are more likely to make connections due to growth and metabolic processes. The converse is also true; neurons that do not send signals to each other will break their connections. The music you listen to early on forms certain connections and breaks others, hence your taste in music.

Processing music individually versus in a social setting brings up questions about how these two layers interact. Musical tastes often have emotional roots and are therefore deeply important to people. In 1999, Schulkind et. al conducted a study on music and its role in autobiographical memory recall. The experimenters played popular songs for 36 adults, and then asked participants questions about emotions the songs evoked and whether the songs reminded them of life events. The strongest memory associations came with stronger emotional connections, and the general emotion described by the majority was nostalgia. Researchers found a strong correlation between positive emotion and recall of autobiographical memories, emphasizing the impact of emotional charge on memory. It’s also worth noting that the emotional valence associated with music tends to be positive rather than negative. Positive life events with music tend to be in group settings, so much of the emotional charge of music may stem from positive social experiences.

Emotional connection linked to important times in our lives creates stronger memory associations and cues, enhancing ability to recall past events. In 2009, Dr. Petr Janata, a professor of psychology at UC Davis, conducted an fMRI study on 13 UC Davis undergraduates. Participants listened to 30 songs while undergoing an MRI, which demonstrates brain activity by measuring blood flow, and then answered a survey about episodic memories recalled while listening to the music. The results showed increased activity in the prefrontal cortex upon listening to music, and an association of this region with both autobiographical memory and the processing of familiar music. This study indicates that listening to music is linked structurally to the processing of autobiographical memory, and so it shapes the way we view ourselves in memory. Essentially, because musically-induced emotion is connected to memory recall, hearing a song associated with a memory might change how you reflect on that memory and on yourself.

Beyond individual experiences, music plays an important role in social environments as well. People process music differently based on how ‘empathic’ they are, a trait defined here as a person’s capacity to demonstrate empathy as a steady aspect of personality. This past April, Zachary Wallmark, a researcher at UCLA, conducted a study that quantified empathy and then performed MRI brain scans on participants listening to music. Empathy as a trait was measured using the IRI test, a questionnaire of statements to gauge self-reported empathy. The study found that people who tend to empathize more use different areas of their brains when processing music, specifically areas associated with socializing. In other words, strong empathizers process music as a pseudo-social interaction with another human being, which involves brain regions that deal with social rewards experienced in empathic social situations.

This scientific finding implies that music helps humans develop and sustain empathy by activating social circuitry of the brain. Experiencing the sensorium of music is like practicing social interaction. When a song resonates with you, it’s a similar experience to feeling a connection with another person­'s emotions, familiarity, and memories fill your headspace. In this way, music is a lens through which we process our social worlds.

Music as a pseudo-human experience deserves reflection. The effects of combining social interaction with music versus processing music individually are pervasive in everyday life and have become more complex with the advent of social music apps like Spotify. As stated before, music can be an internalized factor that influences the way in which we view ourselves, past and present. But this concept also manifests externally—in the clothing style, slang, Spotify playlists, or music scenes we might choose to be a part of.

Shared music spaces, such as concerts, combine both the internal and external aspects of music taste. People often listen to music on their own, but come together at concerts for a social experience. The overlapping neural networks for actual human interaction and simulated human interaction from music are both activated, enabling the strong bond felt between complete strangers who love the same music. Transferring music from a personal space to a shared space may enhance social connections, because the way in which the brain processes music and human contact is so similar structurally, as shown in the MRI studies. This increased activation of social areas of the brain may also be why apps like Spotify are so popular. Collaborative playlists, friend lists, and other social functions are compelling because we crave social connection, and music is a platform that enhances this.

The virtual spaces of platforms like Spotify present a different interaction of the internal and external effects of music. Instead of discovering other people’s musical tastes through conversation or concert, you can parse through that information from your phone or laptop ––alone. Yet listening to music alone can become social too, because other users can see what you’re listening to. Spotify could be another social space where people strive to curate a desirable image. On the other hand, the social sharing can also open up connections and conversations that are based on knowing what friends are listening to.

In general, we gravitate towards people with similar interests because we feel more comfortable disclosing personal information with them. Sharing intimate parts of ourselves, like what music we listen to, is a large basis of forming social relationships. Music can be a source of finding commonalities, and is a strong shared interest because of its emotional and memory associations. Using social circuits of the brain, both literally and through music simultaneously, is a powerful effector in strong social relations. And while new ways of sharing music online may intuitively seem more disconnected than going to concerts because of its virtuality, overall, the ability to access information about what friends are listening to actually gives music a more prominent place in the sphere of social relations. It makes sense that so many people bond over listening to music together, and why Spotify playlists have taken on a social networking aspect of their own. Regardless of time or place, physical or virtual, music gives us something to gather around, a shared space, a form of expression. Many people say they can’t live without music; the deep social connections that are sparked and developed by sharing music may be why.

KRISTEN WHANG B’19 enjoys pretending to be a movie protagonist while walking down the street with her headphones in.