Taking Back the Wheel 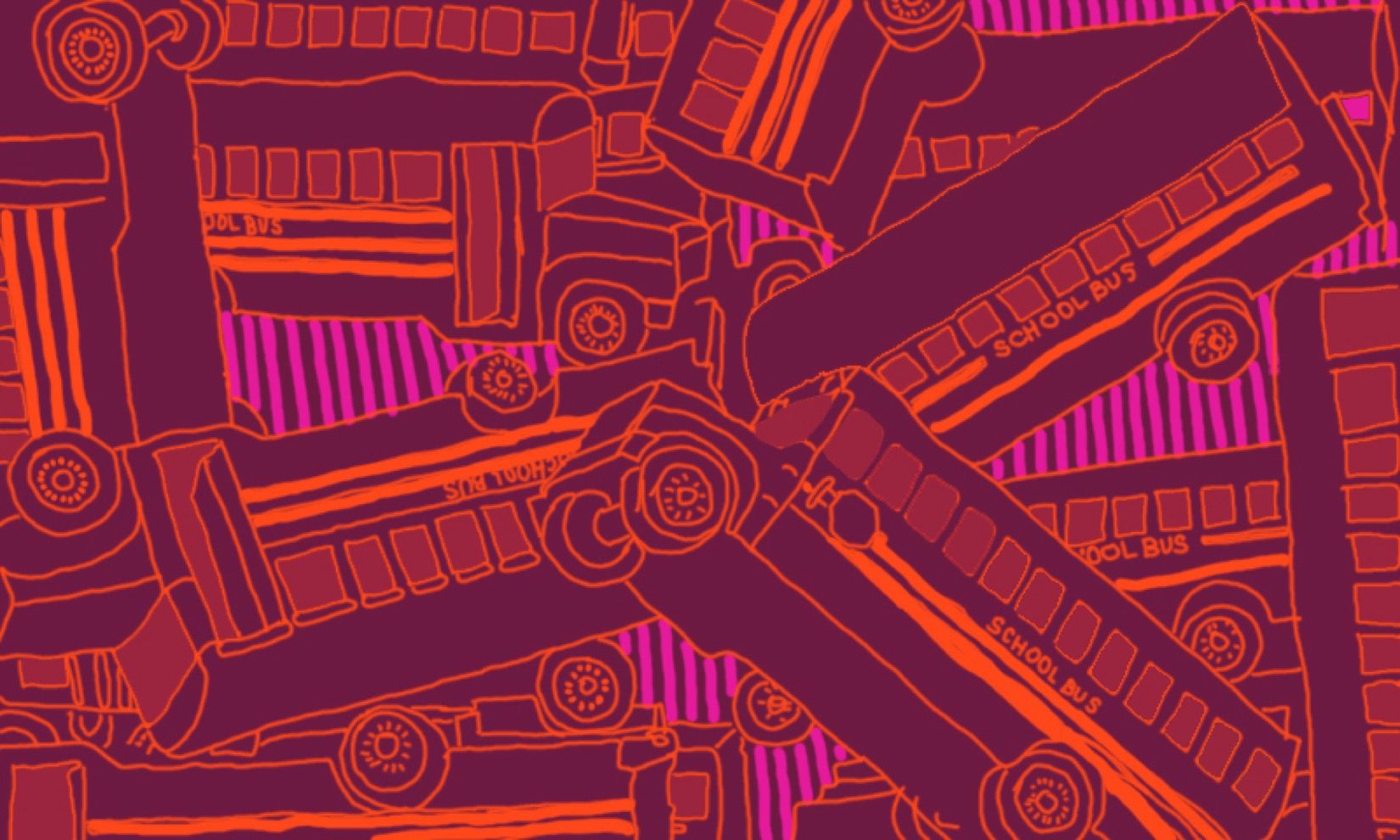 Wafaa is eleven years old and attends Nathanael Greene Middle School. She and her younger brother were two of the almost 10,000 affected by the 11-day-long school bus driver strike. She missed almost a week and a half of school, including the breakfast and lunch that the school provides her every day. She told me her older brother tried to drive her to school, but couldn’t do it again in order to make it in time for work. “I have a lot of homework and tests to make up for,” she said, “I even missed the movie they do every week.”

On Monday night, Councilwoman Nirva LaFortune and Councilman Samuel Zurier organized a panel for parents to express their concerns regarding the recent bus strike and work-to-rule. Yet, many parents were left out of the conversation—a crucial one that better explained the role of the city in anticipating and responding to these issue. Wafaa’s mother, for example, does not speak English, and had a hard time accessing information regarding the strike as it went on. A few times, she prepared her children for school, waiting to see if the bus would come.

The Providence First Student drivers’ strike began on September 27 after an unsatisfactory response by the school bus contractor regarding retirement benefits for its employees. Teamsters Local 251—representing the 100 or so Providence bus drivers—and First Student initially met with a federal mediator on October 9, for the first time since the beginning of the strike, but the meeting reached no settlement. An agreement was finally made on Friday night after 11 days of striking. Nick Williams, business agent for Teamsters 251, commented on the settlement as “a decent compromise,” but the negotiations were not free of obstacles. The strike was the culmination of several months of dispute over pension protections for First Student workers. “We feel that medical and pensions are a human right and that’s what we’re out here fighting for” said Matthew Maini, the union’s business agent-elect, at the beginning of the strike.

It is unclear whether the settlement has managed to respond to all the initial concerns of the strikers. While the central dispute was regarding retirement benefits for First Student employees, further concerns have been overlooked by journalists reporting on the dispute. The strike broke out as “union officials want[ed] the company to begin providing a pension to bus drivers, while the company maintain[ed] it is only willing to increase its contribution to the members’ 401(k) plans,” WPRI reported. Under their current contract, striking drivers told the College Hill Independent, First Student will match some contributions that drivers make into their 401(k) plans. But because First Student limits the drivers to only around 30 hours a week, many drivers cannot afford to contribute any of their income into their plans, meaning that after decades of service to First Student, they retire with nothing. Teamsters Local did not respond to repeated requests for comment on the strike demands.

Workers involved in the strike articulated other concerns. A union steward who asked to be identified only by his first name, Gregory, told the Independent that, despite the company’s branding efforts, working for First Student “is not a part-time job.” Gregory pointed to a worn, blue sign displayed on the street next to the First Student lot: “Now Hiring: Earn Extra $$$ Working Part Time Hours.” But this promise doesn’t hold up to the reality of working for First Student: the company’s scheduling demands make it difficult for workers to access a secondary source of income. Gregory, who has driven for First Student for 12 years, explained that drivers have to show up between 5:30 and 6:00 AM to check in and prepare the buses and are able leave the bus yard around 9:30 AM. They have to be back at the schools at 1:30 or 2:00 PM to pick up students, leaving little time to work a shift at another job, so unless drivers can get assigned to a rare daytime field trip, they’re unable to make any money during the midday hours.

First Student, a multinational transportation company based in Scotland, operates 44,000 school busses for over a thousand school districts in North America, making it the largest provider of school bus services in the United States. The company has a long history in Rhode Island, having negotiated a contract with the City of Warwick in 2009 and a $35 million contract with Providence through the Rhode Island Department of Elementary and Secondary Education in 2015. According to WPRI, the bus company—as the single provider for student transportation in Providence— has earned $35 million from the City of Providence between 2015 and 2017.

First Student is currently seeking a two-year, $25 million contract extension to continue to transport the nearly 10,000 lower and middle school students in Providence (high schoolers in Providence use the RIPTA to get to school and are unaffected by the strike). The contract extension has already been approved by the Providence School Board, according to what Frank McMahon, a spokesperson for First Student, told WPRI. The proposal has not yet been heard by the City Council’s School Department Oversight Committee. Still, the settlement between the union and First Student, in which Mayor Elorza has played a key role, suggests that the city plans to continue working with First Student.

Earlier this year, First Student was involved in several labor disputes, in Seattle, Southern California, and Montreal, to name a few, over the benefits they provide—or don’t. The stories of Seattle employees—who striked for a week last winter demanding better pensions and healthcare benefits—strongly resonate with those of Providence workers. According to the Seattle Times, back in February, “bus drivers told stories of having to declare bankruptcy, pay for expensive medication out of pocket, or live paycheck to paycheck because their healthcare plan was unaffordable or they couldn’t get enough hours to be considered a full-time employee.”

Elected city officials characterized Providence public school students and parents as stuck in the crossfire between the Teamsters union and First Student. “Think about the kids, think about the families, think about every single resident in the City of Providence that’s affected by this,” said Mayor Elorza in a press conference on October 2. Given the scale of transporting over 9,000 students, Elorza said, the city did not have the capacity to respond to the strike. Among those, around a thousand students with disabilities, who benefit from Individual Education Plans (IEPs), were affected. Laura Hart, a spokesperson for the district, told local news outlets that 165 students missed school every day of the strike. In fact, some schools that rely heavily on bus transport, especially lower and middle schools, saw attendance drop by as much as 15 percent. Local media has also made families the focus of the labor dispute. In an article published September 27, the Providence Journal reported, “today, a 13-year-old girl suffered minor leg injuries after she was struck by a vehicle while riding to school on a Jump bike at 8:30 a.m.” Such rhetoric, rather than centering the complicated situation students and parents found themselves in, pits vulnerable students against the right of Union members to strike for better labor conditions.

In the context of the strike, the Providence public school community was pushed to rise to the occasion. Maribeth Calabro, president of the the Providence Teacher’s Union and a special needs educator at Nathanael Greene Middle School, told the Independent that teachers implemented double coverage to make up for the loss of services students experienced due to the lack of transportation.

Without a suitable alternative to First Student, students didn’t go to school and, in turn, couldn’t access crucial services, such as free and reduced lunch, counseling, and extracurricular activities, in addition to class time. In such a context, City Council President Salvatore responded by saying, “we need the stakeholders to come to the table and create a resolution that works for everybody.” This is not a question of whether the city has taken a side in the labor dispute, but rather the role of the city government in mediating corporate and community interests—which in this case has had direct effects on the lives of children and their access to crucial services.

It was the very same negotiations between First Student and the city government back in 2015 that brought the Providence community to this vulnerable position. Back then, the contractor company negotiated a “force majeure” clause that excused them from their duty to parents and student in the case of strikes, civil disturbances, or natural disasters. Nina Pande, Providence School Board Vice President, spoke to this process in a recent panel discussion. In 2015, when the call to contractors was made, two bidders came in. The central compromise at the time, Pande expressed, was that the force majeure clause would be kept in order to negotiate newer vehicles within a three-year period. Ultimately, First Student was granted the contract as it was the cheapest option for the city. In the city’s eyes, budget seems to be the primary concern. In the recent panel to respond to parents' concerns regarding the strike, the School Board representative emphasized that “the 5-year projection is a 35 million dollar deficit for Providence schools,” she said. And, “while not everything is about money, everything is about money.”

“I am glad that both sides are heeding the call to put the needs of students and families first by engaging in constructive dialogue,” said Mayor Elorza following the announcement that a settlement between the two parties had been reached. The Teamsters and First Student sat down following rising tension on the night of Thursday October 10, when a fire damaged six to eight buses parked in the company’s compound in Silver Lake. The fire has been condemned by state officials, First Student, and the Local 251 union alike, remaining a mystery to all involved.

The agreement was facilitated by the fact that Elorza’s administration gave First Student the $600,000 the city would have paid First Student if the strike didn’t happen, drawing criticism from many local leaders. This is certainly a different approach to the one taken by other local governments. In November, as a contract dispute risked a strike, the affected school district in Seattle threatened First Student that it would, “seek damages of $1.2 million per day from the company if a strike occurred,” as reported by the Seattle Times.

According to a Teamsters press release, “driver retirement security was addressed in the contract by the establishment of a new pension for the drivers… all drivers will benefit from this enhanced retirement benefit regardless if they make any contributions with their own hard earned money.” According to WPRI the four-year deal also prohibits the drivers from staging another strike throughout the contract. Nicholas Hemond, president of the Providence School Board, confirmed in an interview to WPRI that the board plans to review how it can hold First Student accountable to its commitment to the workers. Yet, it is unclear what steps are being taken to make the company accountable to the greater Providence community—if any.

The question remains: will the local government stand up to predatory corporate conduct moving forward? Chris Maher, Superintendent of Providence Schools said on Monday’s panel that the solution is in a “more competitive bidding process” in the social services contract process. Overall, the approach seems to be that more competition makes better companies, rather than reconsidering the role of profit-making in the context of crucial services for Providence families.