A Pittsburgh international eatery and its politics 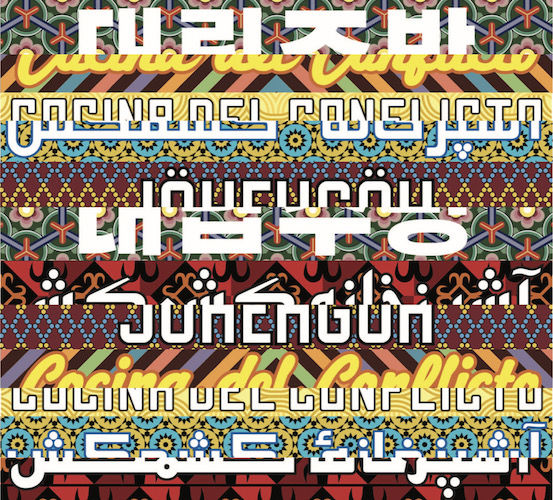 Dawn Weleski is a Pittsburgher. She talks fast and with a purpose, was “raised on pierogis and pulaski noodles,” and has a nostalgic appreciation for the foods her parents and grandparents brought her up on: Jell-O salads and creamed lettuce, “which is iceberg lettuce mixed with miracle whip,” she explained.

These days, Weleski has a more diverse palate. She’s had confetti cake at an apartment complex in Havana during a cooking-demo-turned-salsa-lesson. She’s learned to make barbari bread from a Persian grandmother’s recipe using locally milled Pennsylvanian grains. She’s even learned cooking tricks from North Korean defectors in a hotel kitchenette in Seoul—all part of her research for Conflict Kitchen, the Pittsburgh art installation and food kiosk that closed last summer after a lauded ten-year run.

Artistic partners and co-faculty at Carnegie Mellon University in Pittsburgh, Weleski and Jon Rubin founded Conflict Kitchen with a menu of anything but the type of food they grew up on. Their website defines the project: “Conflict Kitchen only serves food from countries with which the United States is in conflict.” In their last installation, they even served food from within the US; the Haudenosaunee Confederacy’s cuisine was featured during the height of the Standing Rock reservation uprising against the construction of the Dakota Access Pipeline. Unlike their other installations, Weleski and Rubin did not take an overt political stance on the issue. Rather, they attempted to start a conversation by simply serving a particular cuisine. For example, instead of criticising the Dakota Access Pipeline directly, this particular installation focused on a Native American community with origins near Pittsburgh and provided additional resources for visitors to look into on their own time.

Over ten years ago, the duo worked alongside a Persian friend and several local farms to create the first dish that Conflict Kitchen’s inchoate pop-up would serve. Later, stews and technically complicated rice dishes were added to the Iranian menu, as well as lecture series, film screenings, and even Instagram takeovers intended to inspire visitors of the restaurant to do more research about Iran and begin a discourse in Pittsburgh. The conflict between the U.S. and Iran, Weleski and Rubin postulated, was already on the average American’s mind, but their intention was to educate on the “why and how,” as Weleski phrased it, in addition to providing a concrete experience of everyday Iranian culture.

“Food is the medium,” Weleski told the College Hill Independent, offering an opportunity to “break bread.” She elaborated: “to expand one’s knowledge, one’s palate, one’s experience. It gets you at that gut level and it also becomes that opportunity while you’re chewing and having that experience, you can introduce additional information and complication and nuance to something more than just a sensorial experience, which is what art does anyway.” However, is breaking bread the best means of political engagement? Perhaps its power lies in the ability to inspire an effective response.

Each iteration of the food kiosk took two years to create. A tentative location is suggested, a dialogue starts, and the team launches into research, relying on the generosity of individuals and organizations Weleski referred to as “nodes of collaborators and partners, both in the country that we’re focusing on and in the diasporic community in Pittsburgh, as well as other cities throughout the US.” When Pittsburgh lacked a community of, say, North Koreans, Weleski and Rubin traveled to Virginia and Los Angeles.

On takeout food and the history of foreign food being adapted to American standards, Weleski said, “I’m not saying that’s not cultural appropriation.” According to Weleski, the appropriation is, “built in because of a number of things: a capitalist society that exists in the States, the opportunities that are or are not afforded to people that have chosen to come to the US or who have been brought to the US not by their own volition.”

Weleski itches to engage, comfortable with self-contradiction for the sake of nuance. “At the heart of Conflict Kitchen, food isn’t the medium.” The true heart of Conflict Kitchen is the relationships formed between people who participate in eating at, working on, or experiencing the installation. “We are very cognizant of trying to be a bridge,” she explained,“that bridge is not a neutral bridge; that bridge is not without editing and curation of voices.” When a customer orders food from Conflict Kitchen, they are handed a pamphlet with a political testimonial along with their food. Voices from that region would speak to US-home country relations in print while the customer ate the meal from that region. But if the customer at Conflict Kitchen wished to toss the sandwich wrapper that had an interview with an Iranian Pittsburgher printed on it, they were free to do so.

In  2014, Conflict Kitchen stirred up controversy with one particular “curation of voices.” After announcing a Palestinian food menu, Rubin and Weleski received a surplus of media coverage attacking them for one-sidedness, as well as a death threat warranting the installation’s week-long closure. This sparked inflammatory headlines in conservative outlets. “Foundation Run by Kerry’s Wife Funds Anti-Israel Eatery,” referencing the $50,000 grant from the Heinz Endowment, which was headed by Teresa Heinz Kerry at the time. This NewsMax article calls Weleski and Rubin’s installation a “radical anti-Israel, anti-American snack bar.” Simultaneously, Heinz Endowments was publicly disavowed by B’nai B’rith International, an NGO with a complicated history and notable role in the transition of Israel into a state. According to a November 2014 article in Hyperallergic, the controversy surrounded two issues: “Its Palestine themed programming,” and, “text printed on their food wrappers, which included excerpts from interviews conducted in Palestine.” The conversation sparked in Pittsburgh mirrored the high-intensity of national discourse on the occupation of Palestine.

Pre-death-threats, Weleski and Rubin wrote a response to the uproar in line with what one might expect from conceptual artists: “Promoting understanding is at the core of Conflict Kitchen’s mission.”

Although Conflict Kitchen never capitulated to calls for an apology over centering their programming around Palestinian voices, they fell short of taking a hard stance on Israeli occupation. “If we were an activist project,” Weleski said, “when the BBC reporter asked us, ‘Are you pro-Palestinian and anti-Israeli?’ we might have had a different response than, ‘We’re pro-human-rights.’” In terms of the paperwork for Conflict Kitchen’s financial backing from the Heinz Endowment, they are not an activist project. It is striking that they refuse to be defined as such, as their subject matter is overtly political, and the public response is political and activist, too.

On her own political role in Conflict Kitchen, Weleski said, “I think the project is successful because people can understand it as a food project—whatever that means. Or as a cultural project, or a political project.” As a political project, it drew the most engagement from the public. However, she clarified: “Our main priority is thinking of ourselves as artists.”

Conducting honest research to create testimonial pamphlets for Conflict Kitchen is difficult, even impossible, in Weleski’s eyes. “I have a preconceived notion of the answer that you want,” she told me, drawing my attention to any answer that seemed to dodge a question, “so I’m trying to battle that. Imagine someone in a foreign country, where English is their second language, third language, fourth language, who knows? And then the mistranslations that happen there.” Conflict Kitchen has been dedicated to ensuring that interview participant volunteers are entirely comfortable with sharing and aware of the means with which their words will be packaged—often on actual food packaging.

Weleski continued, “We’re not interested in getting a particular set of answers. We’re interested in getting to have the time and the space and the interest in working with people.” Ideally, people are open to sharing their culture and cuisine, and have a full understanding of how their words will be applied in the Pittsburgh installation and handed to people via transcribed interview. It is an attempt to start a conversation between different sides of one large community.

According to Weleski, future iterations of Conflict Kitchen, ideally, will travel further throughout the 100-mile radius of the Pittsburgh region to reach people who have not yet experienced their food, and to start the conversation among those who are perhaps less willing to engage than the progressive leaning residents of central Pittsburgh. Although the duo have not announced plans for any such future iteration yet, Weleski said that she and Rubin seek the best way to continue the project, and to preserve it as a “toolbox:” the medium for their political art statement.

Even so, it is crucial to consider the gap between artistic conversation and the impact on the lives of millions of people who live in countries devestated by US military and/or economic intervention. Cultural awareness via food is a humanizing step, and an important, groundbreaking one, but certainly does not encompass the total complexity and high stakes of US military expansionism in the 21st Century.

PIA MILEAF-PATEL B‘20 wonders if the next iteration of Conflict Kitchen should highlight the conflict between the US and its citizens.