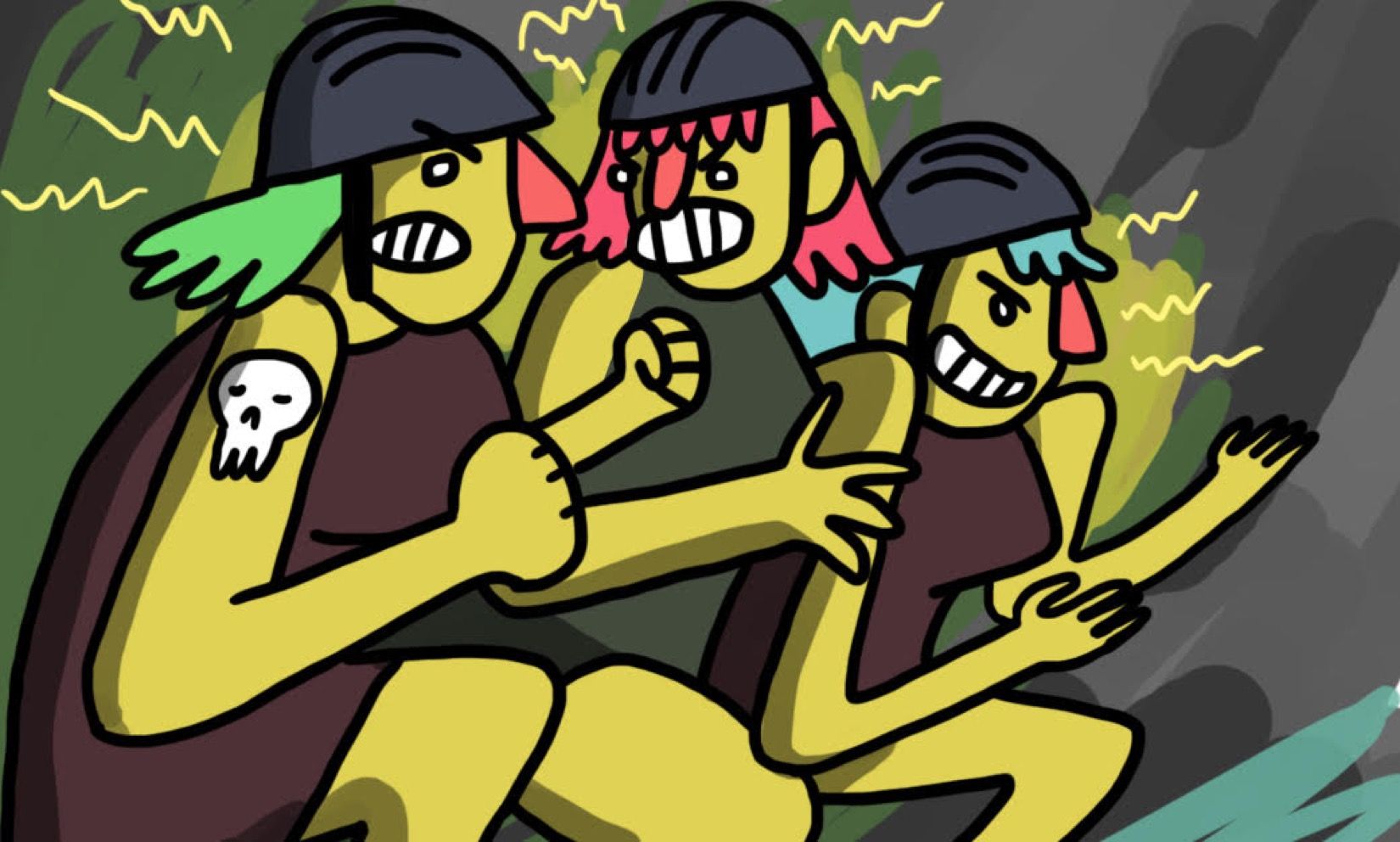 It’s the Saturday night championship game for the Providence Roller Derby League, and excitement is running high. “Hips Don’t Lie” by Shakira blasts through the speakers, and the skaters sit against the wall tying up their laces.

The game is between the Old Money Honeys and the Sakonnet River Roller Rats. The Mob Squad, the other team in the Providence league, came in third this season. The Old Money Honeys haven’t won a championship in years, and given all the homemade signs that have dollar signs on them and “OMH” drawn in red crayon, it seems that they’re the fan favorite. Maureen Seigart (derby name Hotsauce), who’s been involved in the league since 2006, told the Independent, “we love underdogs here.” The Old Money Honeys might be the underdogs in this game, but in a sense, the entire Providence Roller Derby League is the underdog: they've managed to create a robust organization with lots of enthusiasm and not a lot of funding.

The West Warwick Civic Center, where the league held its home season this year, is a multi-use stadium. Tonight, basketball hoops are pushed to the side and the lines of the derby track are delineated by bright pink and yellow tape on the dark green floor. The crowd, sitting in lawn chairs around the ovular track, seems unfazed by the loud soundtrack. It’s a diverse crowd—young women with stretched out earlobes and arms covered in tattoos, old men in polo shirts and khaki pants, lots of young kids running around and dancing. Many skaters’ partners and even parents are there, sporting t-shirts with their loved one’s team logo.

Selah Addison (a.k.a Boones Harm), a skater for the Rats who has painted neon green and hot pink stripes on her face, gives me a quick rundown of derby rules just before the match starts. Each team has four blockers and one jammer. “The positions do kind of what their names sound like they do,” she told the Independent. In short, jammers score points for each blocker they pass, and blockers try everything to keep jammers from getting through.

After both teams have a chance to warm up, one of the announcers—a bearded man in a bright blue dress—shouts into his microphone, “Who’s ready for some roller derby?” The crowd cheers, and the Rats take to the track in their green and pink outfits. They skate together in a pack to the sounds of a videogame soundtrack as the announcers call out their derby names. “Number 30, Rachel Rayge.” “SPF9, Sunscream.” Once they do the same for the Old Money Honeys (“Jamie Lee Hurt Us” and “Nutritional Beast,” among others), it’s time for the bout to begin. The jammers from both teams line up behind the pack of blockers. The ref blows his whistle. OMH quickly racks up a substantial lead—it’s 42-2 at an early timeout.

The West Warwick Civic Center is not an ideal spot for roller derby. The track is just tape on the ground and the teams can’t set up concession stands beyond a few booths at the back selling “I <3 Roller Derby” merch. Until 2015, the Providence Roller Derby (PRD) base was the Narragansett Ocean Club skating rink. When that rink unexpectedly closed, the league was left with no permanent place to skate. According to Hotsauce, “No one saw it coming.” She adds that they would love to be based in Providence, but “we’ve been priced out. Which sucks because people have to drive here.” She gestures to the crowd: “We love that they can all come, but there are a lot of people who can’t.” In a perfect world, they would have their own empty warehouse in downtown Providence that they could deck out for practices, bouts and fundraisers. Unfortunately, rents for those spaces are twice their budget. So, without a permanent venue, PRD is forced to compete with other club sports for spaces and time slots, doing their best with their limited resources as a nonprofit.

The league is run entirely by volunteers—skaters take on additional obligations on top of practicing and competing (and their full-time jobs), like administrative tasks and coaching the junior league. But according to Hotsauce, they're willing to make the necessary sacrifices: “A lot of times, derby just takes priority.”

PRD’s scrappiness fits in with the modern misfit culture of roller derby. The sport had its original heyday in the 1950s and ‘60s, when it was televised. In 1969, nearly 15 million people a week watched the sport. But even with its popularity, the National Derby League was disorganized—teams spread out all over the country led to high travel costs and skaters griped over unfair salary distribution. In 1973, Jerry Seltzer, the owner of the national league, was deep in debt, and decided to shut down operations. Then, in 2001, a group of four women in Austin—calling themselves Bad Girl Good Woman Productions, and referring to themselves as She-E-Os—decided to form an all-female roller derby league. But many of the skaters in the new league didn’t like the corporate model of Bad Girl Good Woman Productions, and wanted more control. In 2003, they broke off and formed the Texas Rollergirls—a skater-owned and committee-run collective. And so began the resurgence of roller derby as we know it today: a decentralized feminist project, and a full-contact sport. Sarah Kingan (derby name Sarah Doom), who graduated from Brown in 2002, founded Providence Roller Derby in 2004 after spending time skating with a league in Arizona.

“It was crazy at the beginning,” says Maureen Seigart (Hotsauce), who was living with Kingan at the time. PRD teams skated at the rink by Kennedy Plaza. Hotsauce told the Independent, “there was just this energy from being downcity, seeing Providence residents be a part of this weird little sport.” The league quickly grew from its original 20 members—some college students, but mainly Rhode Island residents. Along with the three home teams (the Old Money Honeys, Mob Squad and the Sakonnet River Roller Rats), PRD now has two travel teams, the Rhode Island Riveters and the Killah Bees, that compete nationally. In the Women’s Flat Track Derby Association, the Riveters rank solidly in the top third (97th out of 348 teams for 2018).

One factor contributing to the sport’s growth, according to Amanda Chouinard (derby name Apocalypse Meow), is the 2009 movie Whip It. That is, the comedy starring Ellen Page as Bliss, a high-school girl who becomes enamored with roller derby as a way to escape her stifling hometown of Bodean, Texas. “I just saw that movie and thought, ‘oh I want to do that,’” Apocalypse Meow says. She says the "be your own hero thing," epitomized by Whip It, is what hooked her. So, when she saw a Facebook post about PRD, she decided to get involved, and her two daughters joined the junior training program. “We’re such a derby family,” she laughs.

As derby in Rhode Island has grown, the community has worked to be inclusive of women with different body types, gender identities and sexualities. Derby is often cast as a sport only for queer women—Urban Dictionary calls it “lesbian Nascar.” But beyond the stereotype, Anne-Marie Horne (derby name Citizen Toxie) says that inclusiveness is a core value for the league: “It’s just kind of wonderful that way. It just is who we are, and that’s it—it just is.” Toxie says derby has options for skaters with all sorts of body types. Larger people can be incredibly successful blockers; thinner skaters can sneak through the pack. Although Toxie is small with an athletic build, she says derby did not come naturally to her: “I had to train for nine months before I joined.” But, with some dedicated practice, anybody (and any body) can do derby, if they’re willing to get some bruises.

Derby is a full contact sport—players push each other down and when skates and knee-pads hit the ground, it sounds a bit like bones cracking. On the track, skaters take the opportunity to disregard all societal norms about what to wear or how to act. “We want a sport for ourselves where we’re not constantly being sexualized,” Hotsauce told the Independent. “We do it for ourselves—it’s not for anyone else. And if they don’t like it, that’s too bad.” PRD now brings this message of confidence to their junior league, which has had three official seasons. Hotsauce says she loves seeing the “fresh daisy children” who come through the program. “Hopefully we’re building some character,” she says. Toxie—who has helped coach the junior league—also thinks there’s something powerful about seeing how little girls’ views of their bodies change when they do derby. It’s almost a more powerful shift than for the adults who join.

At halftime, the Old Money Honeys are up against the Rats 120-78. The gather sit in a circle in the corner of the arena, passing around a bag of Haribo gummy bears and discussing their offensive moves for the second half. Their red T-shirts are drenched with sweat.

The dance crew for the halftime show runs out to the center of the track and invites the crowd to join in their routine. A few little girls in green tutus and panda t-shirts excitedly bounce along at the sidelines. The skaters’ children run happily around the stadium holding signs bearing their moms’ derby names and numbers.

Once the performance is over and the bag of gummy bears is empty, it’s time for the second half. With some successful plays, the Rats start catching up—only down by 20 points. Then, in a key moment, the OMH jammer gets sent to the penalty box, and the Rats start racking up points until they’re only down by one. With less than five minutes to go, the crowd is on their feet, cheering. The game stays neck and neck until there’s less than 30 seconds left. The Rats’ jammer pushes her way through the pack just in time, and she pumps her fist up and down. They’ve won, 183-179.

The crowd gets up from their lawn chairs, and everyone forms a line around the track. The Rats skate by, smiling and sweaty, and high-five everyone with “My House” by Flo Rida blasting in the background. The Rats form a tunnel with their hands, and the OMH skate through it and high-five the crowd as well, most smiling and all sweaty. The crowd begins clearing out, and some of the skaters leave their teams’ side to give their kids and partners sweaty forehead kisses, towering over them with the extra height of their skates. The Rats take a picture with the large trophy that the announcer has handed them, and the remaining crowd starts helping peel off the tape of the track. Some kids pocket bits of tape as souvenirs.

Players from both teams stand together in circles, laughing and recapping the game. Roller derby is a competition, sure, and the Old Money Honeys are sad to have lost another championship match. But no one seems to mind too much; they’re just happy to be skating together. Hotsauce refers to PRD as her “tribe.” And if PRD is a tribe, maybe they’re the Amazons—a strong, forceful, organized group of warriors, in which every member is integral to maintaining and improving the community, and where men stick to the sidelines.

ALINA KULMAN B’21 would rather be a Rollergirl than a She-E-O.