In Memory of Clotilde Martínez Cano 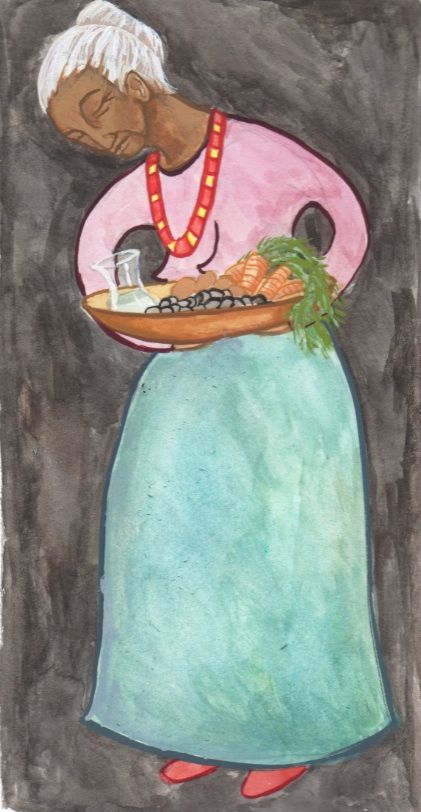 “Todos van a pensar que es una bruja,” my grandmother would frantically tell my mother. At a very young age, it became apparent that I was left-handed. My grandmother worried no school would take me left-handed because they would all think I was a bruja, an evil female spiritually linked to el Diablo who holds a vast knowledge of malevolent spells and curses.

My bisabuela, my left-handed great-grandmother, was considered a curandera, also a witch-like figure, but connected to the Christian God. Unlike a bruja, my bisabuela used her powers to heal, not harm. She was, all at once, a psychic, a midwife, and a herbalista. During la Revolución, there was no access to doctors in Acambay, my grandparents’ tiny town in the hills of Mexico. The tiny hill people of the tiny hill town were all true Mexicanos, with fair, Iberian complexions, standing proudly at their small, indio statures. My 4’10” bisabuela was the town’s healer, rubbing herbal bouquets over infirm bodies, praying for their health. Everyone revered her.

When la Revolución ended, things were supposed to get better for everyone. The government sent doctors from la capital to the tiny hill town, leaving no need for a curandera, especially a left-handed one. In the Bible, el Diablo sat on the left side of God before being cast out of heaven. The left-hand of my bisabuela brought evil and shame to the tiny hill people. She was no longer connected to God; she was a bruja. No longer did the tiny hill town ask her to care for their sick. But in her shame, she dedicated her energy to making her seven sons doctors, all with good right hands. Most of them practiced in nearby Toluca but two stayed in Acambay, and the tiny hill town revered them. And yet, my bisabuela was always a bruja to the tiny hill people—her and her wicked left hand.

Sometimes when I have dreams of when I was young, all I see are beans.

Pinto beans and cheese wrapped in a tortilla. Scrambled eggs with beans on the side.
Arroz con beans.
Many times just a bowl full of pinto beans.
My grandmother stuffed me with pinto beans because she wanted me to have strong blood—sangre fuerte. She told me that the more I ate pinto beans, the better blood I would have. I wouldn’t get hurt as badly as the other kids at school if I fell and scraped my knees. Weak blood spills out of a person’s body, even with the littlest flesh wound. Sangre fuerte refuses to pour out; it is always circulating, perpetuating life.

She knew what happened if you didn’t have sangre fuerte. She remembered what happened to Cecilio, the beloved town tailor and her future brother-in-law. Cecilio never liked beans, even as a child. He would push them around in his plate, secretly spit them out, or feed them to the cat.

Cecilio’s family, even with 17 children, managed to find enough space and food in the house to take in two orphans, Adam and Moises. Adam was a year older than Cecilio and Moises, a year younger. They all became good friends, riding horses through the mountains and fishing in the nearby stream. Moises, however, turned out to have a very mean streak. He set small booby traps to capture rodents and crafted slingshots to shoot rocks at birds.

When Moises got older, he was an angry drunk, quick to rage. He became very jealous of the town’s love for Cecilio. One night at the local cantina, drunk Moises challenged Cecilio’s even-temperedness in questioning Cecilio’s machismo. Cecilio cold-cocked Moises, knocking him halfway across the room. Countering Cecilio, Moises whipped out a knife and stabbed him. Horrified, the other men in the cantina whisked Cecilio to the local doctor. They could not contain his blood because he did not have sangre fuerte, or so they said. So, he bled out and died. Maybe the story would have ended differently had he eaten his beans.

I only drink whole milk. My grandmother drank whole milk almost her entire life, until the distant age of 95.

“Three brothers from la capital established Acambay many lifetimes ago,” is the way my grandmother’s story goes. Before they arrived, there were only indios in the tiny hill town. Once settled, the eldest brother ran a cattle ranch and the middle brother harvested crops and sold them in Toluca. The youngest brother helped his two older brothers, but he grew tired this and wanted to start his own business. He asked his brothers to give him a loan, but they refused. The youngest brother had to find money elsewhere.

A local india told the three brothers of a legendary pile of rocks near the hill town, underneath which a captain of Hernán Cortés’s army had hidden a chest of gold. Though it is unclear how, the brothers managed to locate the fabled pile of rocks. Both the eldest and middle brothers could not lift the rocks but the youngest brother, a consumer of whole milk, lifted the pile with his huesos fuertes. Underneath the pile laid the captain’s gold. Since the youngest brother had lifted the pile of rocks, he kept the treasure. The brother with the huesos fuertes invested the gold in his own business: the first general store in the tiny hill town.

After la Revolución, when things were supposed to get better for everyone, the state government started paving the few roads in and out of Acambay. More cars appeared in the hill town, but with more cars came more ladrones, or car robbers.

One day, many years after la Revolución, my grandmother, her brothers, my grandfather, and other friends decided to go on an afternoon picnic a few miles away from town. They took two cars. They ate, and sang, and played guitar, and laughed at all my grandfather’s jokes: “¿Cuál es el colmo de un ciego? Llamarse Casimiro.”

After a few hours, the group headed back to Acambay.

My grandfather, driving one of the cars back, noticed two well-dressed men on the side of the road. They grinned and tried to wave him down. As he got closer, he noticed that the men were wearing ill-fitted suits. Ill-fitting suits were a well-known sign of ladrones. My grandfather quickly sped up and drove past them. The other car, which my grandmother’s brother drove, did not return that night. Her brother’s vision was not as good as my grandfather’s vision. He did not notice the men’s ill-fitted suits. So, the ladrones robbed him of his car. He and the others in the car had to walk the rest of the way home.

I suppose my grandmother’s brother did not eat nearly as many carrots as my grandfather.

When she was 96 she forgot who anyone was, even her husband. She would often leave our house and start walking up the sidewalk. She had been convinced for some time that her brothers were coming to pick her up and take her on a picnic. Once, waiting for one of these picnics, she tripped on a tree root jutting out of the sidewalk. She broke her leg in the fall.

The doctor had told her a year before the fall that whole milk wasn’t good for her anymore, so she bitterly stopped drinking it. But since she stopped, she no longer had huesos fuertes. She also stopped eating beans in the last year before the fall. She stopped eating carrots. She stopped eating most everything. Nothing tasted good anymore, she would say. So she also lost her sangre fuerte. She nearly lost her sight. My grandfather had started shopping for the two of them after my grandmother started to fade away. He bought white eggs instead of brown eggs. She refused to eat them at first, but sometimes, when she was so far away from us, she would eat anything put in front of her. So, sometimes she ate white eggs.

In her last days, my grandmother’s body swelled up with displaced fluids. She couldn’t move. Her body rapidly deteriorated, matching her already dissolved, demented brain. The swelling hurt her so the doctors gave her morphine, but she desperately whined to return to her tiny hill town. She implored her long-deceased mother, her curandera, to make the pain go away. She wanted the curandera to bleed her, bathe her, surround her with candles and incense, and chant incantations to expel the pain.

My grandmother stopped speaking during the last week she was alive, but was still alert. A nurse routinely took a long needle in her left hand and injected the IV with morphine.