Getting dressed with glamour 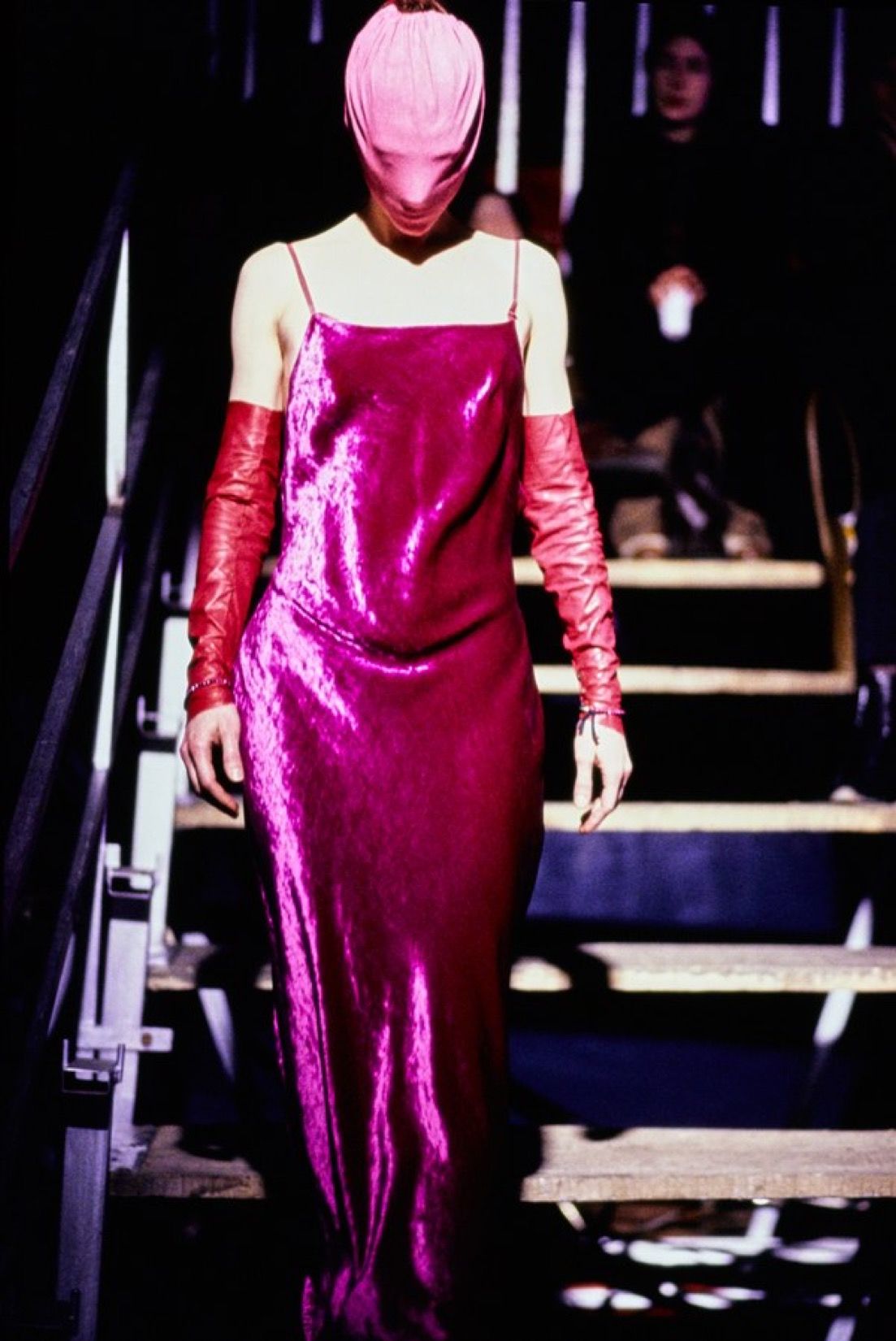 The first piece of clothing I ever really loved was a calf-length dress I would now call slip-inspired. It didn't look much like a slip, though, as I was seven years old at the time and wore nothing but pastel knits. Its drape was different, the fabric heavy and cool. This dress was striped with white and a soft color I called periwinkle (more of a sky, really, I think now). It hit the middle of my calf and swayed when I walked. It made me feel pretty. It made me feel something I identified then, and identify now, as glamour.

Sociologist Beverly Skeggs calls glamour “the opportunity to appear as something different from the mundane... an escape route.” She says that it gives agency to the women who perform it, that it is “about a performance of femininity with strength.” But I’m not sure that she gets at what glamour meant to me, an elementary-schooler in a dress that made me feel powerful.

Glamour, to me, is deciding to enjoy feminine appearance-projection on your own terms. It is finding some place to live there. It is appearing both constructed by gazes other than your own and at ease with your own gaze, okay from all angles. It is rare.

My own relationship to glamour has oscillated wildly in the twelve years between that striped dress and the clothes I wear now. I’ve spent years of my life in Target men’s section corduroys and button-ups, clothes that get me looked at quizzically by children—is he a girl? Is she a boy? That ambiguity has never bothered me, but turning fully away from the world of swaying skirts has always struck me with a different sense of loss. I’ve found joy in those baggy corduroys, but I’ve never found a glamour to call my own there. So I’ve returned part-time to slip dresses, my first love.

But, while these dresses hold the hopeful kernel of glamour, they also carry the burden of prettiness. In them, feminine appearance-projection becomes mine, on my own terms or otherwise. Some clothes seem to offer wearers the chance to forfeit their mission to be a correct woman, or, at least, a correctly-styled one. A slip dress enters its wearer’s name into the running, whether or not they choose it. I’m not certain what the rules of this game are, but I know a fundamental precept is that my body is much more important than anything else about me—mind, soul, what have you.

Over the years, I’ve taken it upon myself to consult the rulebooks. One, Glamour Magazine, does not seem to believe that glamour is such an unusual commodity, as it comes out with a new issue every month. I have been reading Glamour and magazines like it—Vogue, Elle, their girl-children’s editions—almost since I first put on that dress. And I have loved them for as long.

Every criticism I have ever seen of women’s interest magazines holds water. They’re vapid, propagate self-hatred, propagate self-starvation—I don’t disagree with any of these claims. I’ve seen some of those warnings put into practice: I’ve seen self-hating women and self-starved women, women terrified of being called vapid and cowering in fear of the cruelty of others. Besides, the number of women whose interest in these magazines’ content could ever actually be put into practice is vanishingly small. Overall, the clothes displayed are both too expensive and too small for almost anyone to wear them.

But these common criticisms tend to miss something important about these magazines. They miss it because it is a secret, passed between we women’s-interested. Our secret is that there is something inexorably appealing in inhabiting a woman who is not a person but a bodily ideal, in banishing ourselves from ourselves. That is what so many critics of fashion magazines forget or ignore: When flesh is all you have ever been given claim to, you damn well want to claim it back. You want to believe that a perfect woman’s body would make the horrible situation of being cut down to meat more bearable. It’s nothing so clear or interpersonal as, “I want to modify myself towards this ideal so other people will reward me for reaching it.” Reaching it is its own reward, because, were that goal of feminine perfection attainable, all our suffering would be worth it. It would prove that there was—as Skeggs says—an escape route, from this body-obsessive, body-hating paradigm.

In reality, though, physical perfection is the most asymptotic kind of perfection there is. I have never spoken to anyone who felt they had reached it. And I’ve spoken to women who’ve passed through tanning beds, started pack-a-day habits for the express purpose of having something to keep hunger at bay, nearly cried in ballet class because of some very nuanced (and incorrect) curvature of arm fat, eaten only smoothies, eaten only mints, eaten lunch at the same time every day because it seemed like that magical ritual might do something, shaved faces and arms and backs, felt faint in compression tights and push-up bras. I have been many of these women, even, and none of us have managed to become the ideal our bodies are supposed to be.

But I’ve seen the artist's renderings of feminine perfection, and they look like 1993 Kate Moss in a see-through slip.

There are, for whatever awful reason, precise numbers on Moss’s weight and height when she wore this dress, though I’ve tried as best I can to scrub them from my memory and refuse to replicate them here. But the point of those numbers is to put a value on the asymptote. An asymptote you know, after all, seems so much more achievable than a random variable. It names Moss’s thinness not as image, but as goal. When I first saw this dress, long after it had been worn but still too early for me, I thought I was being given a measuring stick, clear as day: here is what you are supposed to look like. Most clothes obscure or stylize; the slip dress’s style is the style of flesh, and it presents a standard for the flesh of its wearer and viewer both.

But there are ways to use the slip dress to different ends. The first is presented by a 1997 Comme des Garçons garment. This dress, slip-inspired in structure, demolishes the form’s insistence on the body by demolishing the viewer’s conception of body as beautiful. There is something sickly and terrible in the form this dress creates, and that is why I love it: it liberates wearer and viewer both by removing the expectation that a feminine ideal is all women's fashion can worship. Maybe there is beauty in rejecting this ideal, too in rejecting all presumptions about what a body is meant to look like.

I see the second in a piece from Maison Margiela’s Fall 1995 collection. Here, the form of the standard ’90s slip is followed neatly, in close-draping fabric that reveals all of the body’s contours. The primary difference between this dress and Moss’s is that this one is opaque. The primary difference between this outfit and Moss’s, outside of the Margiela design’s detached sleeves, is the cloth covering the Margiela model’s face.

Margiela’s disruption of the form is less obvious than CDG’s—and, in some respects, more disturbing. Where CDG has a sense of inward strangeness trying to make its way out, Margiela highlights an outward violence imposed. One feels that this outfit is trapping its wearer, scrubbing out her individuality and making her just a body, in every way possible. This design choice is unsettling, even cruel, especially in the supremely objectifying context of a fashion show. But when I look at this outfit, I’m made forcibly aware of the ways that the obsessive focus on women’s bodies maims and scars.

Finally, a truly joyful slip dress. In 2014, Rihanna wore a translucent crystal-studded slip to the Council of Fashion Design’s Awards. The dress is similar in cut to Moss’s, but the differences in reception between them were many.

Moss’s dress is still lauded as a fashion icon, because her bare body on a runway represented an ideal of thin, white femininity. She had been given the key to that mythic escape route: a body so ‘correct’ that it no longer required her maintenance, her hatred, even her attention. Her body in this dress was perceived as a static art object, not a bleeding, feeling burden. Her clothes were part of the art. As such, they were permitted to ‘push boundaries’ without pushing her with them.

On the other hand, many responses to Rihanna’s dress treated it as a disgrace to her celebrity character. She was lambasted, sometimes to her face, for wearing something revealing. ‘Revealing’ is never a comment on a garment so much as a comment on what the garment reveals. The issue at hand was not Rihanna's clothing, but her body beneath it. Sexuality, rooted in the body, is projected onto Black women in such a way that the escape route from feminine ideals that seems available to thin white women is blocked off.

Rihanna’s response has been to find another way out. When one white reporter criticized her outfit, Rihanna replied, famously: “Do my tits bother you? They’re covered in Swarovski crystals, girl.” This criticism required Rihanna to defend not her fashion choices, but herself, and she rose to the challenge. With her response, she refuses to engage the ‘scandal’ of her body, instead addressing the choices she has made in styling it.

Rihanna is, in my opinion, one of the most truly glamorous—glamorous by my definition, not Glamour’s—women in the public eye today. This is because she wears the feminine ideals she chooses without ever renouncing herself in the process. When her body is seen, it is on her terms. She treats fashion as an ally, not an enemy, to her body.

CATE TURNER B'21 is wearing a slip dress as she writes this.