The House on Keene Steet 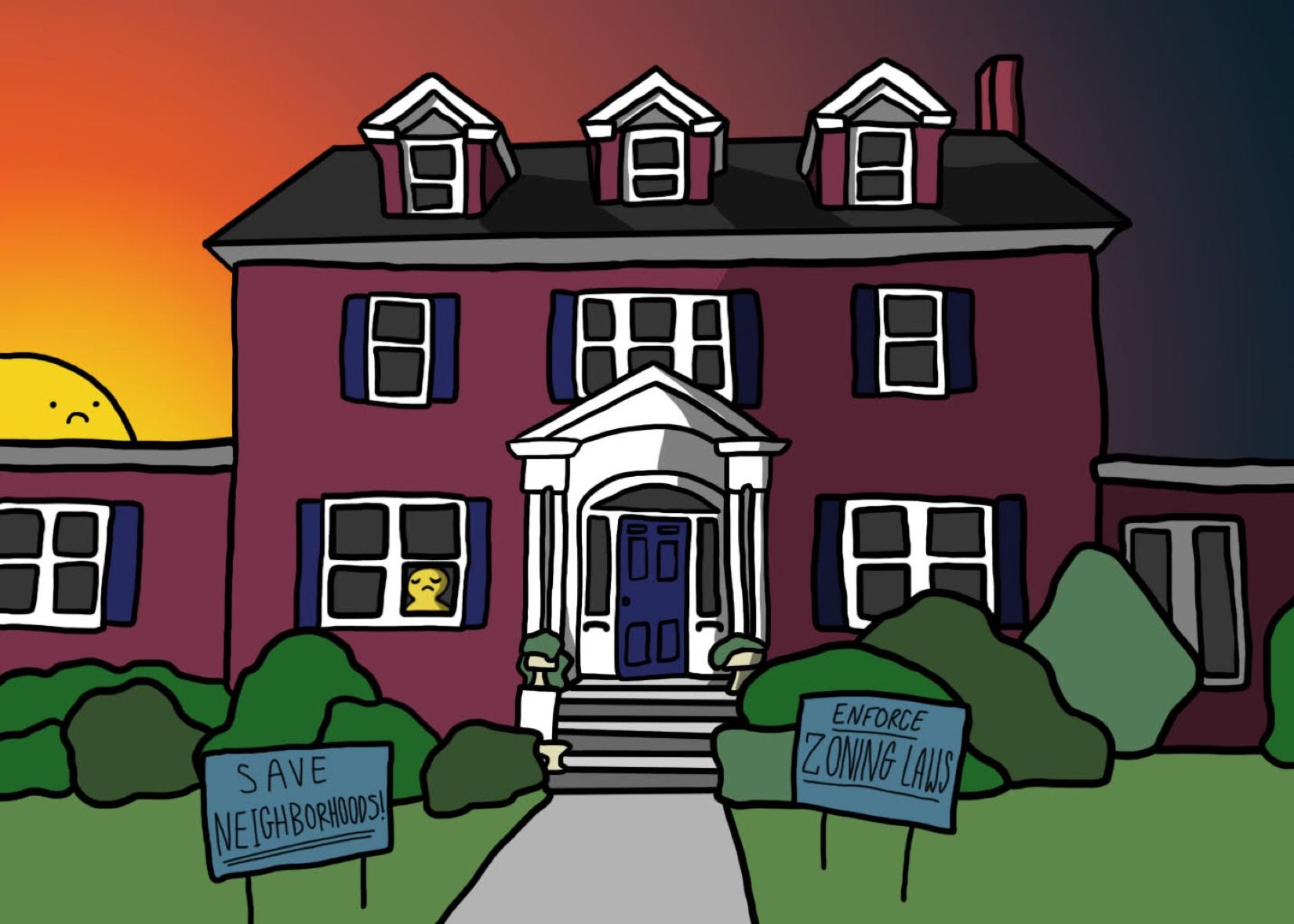 Along College Hill’s Keene Street, identical teal blue signs placed in nearly every yard point to a street united. Unlike other neighborhoods in Providence, this group of residents does not rally against natural gas terminals, Immigrant and Customs Enforcement, or the threat of eminent domain. Their concern, touted by the signs that read “Save Neighborhoods: Enforce Zoning Laws,” is overcrowded student apartments.

“This neighborhood is pretty much under assault right now,” Deborah Simmons* told the College Hill Independent, standing in front of her Keene Street home. A block to the south, Simmons’ neighbor on Lloyd Avenue echoed her concerns. “We’re always fighting this battle of more people stuffed in smaller places. It becomes an Animal House situation,” he told the Independent, pointing towards the pile of trash sitting outside of a student house—a smelly blemish on the otherwise litter-free block.

On Keene Street, the epicenters of neighborhood concern are numbers 77 and 85, two elegant clapboard houses owned by Walter Bronhard, a landlord who made Providence headlines when he bought, neglected, and threatened to demolish the Welcome Arnold House, a historic property off of Benefit Street. Keene Street’s anxieties, though, are only in part due to the question of historic preservation. “We’d like the character of the neighborhood to be preserved,” another resident told the Indy.

That vague notion of “neighborhood character” accounts for many of the Keene Street neighbors’ ruffled feathers. On this block, houses that proudly adorn Providence Preservation Society placards above Munroe Dairy boxes consistently sell for $500,000-800,000. And although residents are clear that the proximity of their homes to Brown University drew them to the neighborhood (Deborah Simmons, for one, invokes the classic college town rejoinder: we love going to lectures!), the proposition of this notorious landlord setting up shop on their block was too close for comfort.

Existing concerns about noise, trash, parking, and public safety only intensified when neighbors obtained a copy of the 77 Keene Street lease and learned that Bronhard planned to rent the six-bedroom property out to thirteen students. To justify their concerns, many Keene Street residents referenced one night in particular when a student house on their street threw a raucous party. People spilled into the street, Simmons told the Independent, rolling kegs down the street and partying well past midnight: “It was the worst party ever.” This moment has since integrated itself in the cultural memory of Keene Street, now known simply as “the hockey party.”

With that sleepless night fresh in their memory, the neighbors began their crusade in December of 2017, and by the spring of this year, they had organized neighborhood meetings, printed yard signs, testified in front of the city council, pooled their money for a private lawyer, and started an online petition in the name of restricting excessive student housing. The petition, which has garnered 141 signatures at the time of writing, invokes a slippery slope: “If [Bronhard] can move 13 students into a 6-bedroom house, why not 20?”

At the heart of these conflicts, as the yard signs allude, are two contentious parts of the Providence zoning ordinances that can be applied to restrict student apartments. One rule explicitly prohibits more than three “college students” from living together in single-family homes on blocks zoned as single family residential neighborhoods, as Keene is. While originally intended to limit the encroachment of student housing into a single family area near Providence College, Bob Azar, Deputy Director of the Providence Planning and Development, told the Independent that this section does not in fact apply to Bronard’s properties on Keene Street. While those houses have been used as owner-occupied single-family homes “for generations,” as Samantha Barnes (name changed upon request), who lives on Keene Street, wrote in an email to the Independent, they’re officially considered two-family homes. The two properties, according to Barnes, have “in-law apartments” in the attic, and thus were grandfathered into the current zoning code as two family homes.

But the Keene Street houses in question are still subject to the more general rule, sneakily nestled within the definition of a “household,” that bans more than three “unrelated persons” from living together in a single unit, in any type of dwellings across the city. So, if 13 students had actually moved into Bronhard’s two-unit home, they would have been in violation of the zoning code. But before this became an issue, according to Barnes, the landlord terminated the lease, moving the students to another property. So, why all the yard signs if the two houses are currently unoccupied and not in violation of the law? By choosing not to enforce the “unrelated persons” rule anywhere in any neighborhood, Barnes alleges, the city gives permission to developers to flip these homes into student housing, against the spirit of the law: “If this rule were being enforced, Bronard would not have bothered to buy 85 and 77 Keene.”

Figuring out why the city might not actually enforce the law, however, becomes more complicated and relies on recent state court decisions. In an effort to protect students’ rights, the Rhode Island chapter of the American Civil Liberties Union has challenged both the “unrelated persons” and “college student” types of laws, arguing that they violate the the equal protection clause of the Rhode Island constitution. The City of Providence, under current Mayor Jorge Elorza, successfully defended the “college students” ordinance in Superior Court just this year, convincing the court that college students are not a “protected class,” like race, ethnicity, or national origin.

However, the ACLU’s challenge to overturn a similar “unrelated persons” law in Narragansett was, in fact, successful, which helps explain why the current Providence administration is hesitant to enforce these rules, as Barnes alleges. The case relied on a 1994 Superior Court decision that clearly stated that the rule is in violation of the state’s equal protection rights and is thus unconstitutional: “The town cannot, in effect, set aside its residential zones for use only by people who have the good fortune to be related by blood.”

The City of Providence has good reason look the other way while students fill up College Hill apartments: a legal precedent that backs the idea that enforcing this law would be discriminatory. It adds up, then, that City Council has yet to adopt an altered ordinance. Says Bob Azar of the Planning Department, “we’re hoping to have some proposals for changes to our zoning ordinance within the next couple of months that we will present to the council.” Still, residents of Keene Street feel they’re being wrongfully neglected by the city. When Deborah Simmons runs into Mayor Elorza at the farmer’s market (as she has on occasion), and he rattles off a list of other problems he’s trying to solve, she’s indignant that her cause always seems to land at the bottom of the list. “The city does not enforce anything!” she says. “They do nothing. A whole bunch of us called, saying ‘is this a violation?’ and they said maybe they would send somebody.”

City Councilperson Seth Yurdin of Ward 1—an area that includes the Fox Point neighborhood and, in turn, many student apartments—might have an explanation for the neglect that Keene Street residents are feeling. He opposes ordinances that would further restrict student apartments because unruly student houses “are the exception and not the rule.” “If there are specific problem properties,” he told the Independent, “there are ways for the City to look at those,” such as enforcing rules against noise or piles of trash. Yurdin gestures, it seems, towards the idea that neighbors can solve some problems amongst themselves, and, if needed, call the City for help. Perhaps a meaningful solution to these problems, then, is bolstering city enforcement of specific nuisances since, according to Councilman Yurdin, the City struggles to staff sufficient enforcement officials. If the City works towards adequately addressing problems as they come up, they can leave the vast majority of quiet students alone.

While Councilman Yurdin suggests that neighbors take up student-related issues with each other (and with City enforcement when needed), Keene Streeters are adamant that their problem will only be solved with zoning-based change. Given the demographics of Keene Street, it seems that this group of neighbors has taken such a systematic approach to problem-solving simply because it can. Unlike so many low-income communities being actively displaced, the Keene Street residents have ample tools to engage City government and apprehend a neighborhood in flux—even if it’s a very different kind of flux. As multiple College Hill residents admitted, they spent hours on the phone with public officials or testifying to city council members. Perhaps most revelatory of the resources at Keene Street’s fingertips is their private lawyer. They have time and money and bright blue signs, but in practice, these resources do more to draw attention away from Providence’s fundamental housing deficiency than they do to create reasonable solutions to the city’s most pressing issues. Indeed, at the same time home-owning College Hill residents worry about the potential for their neighborhood’s ‘character’ to change, renters on the South Side, West End, and Olneyville are being priced out with little interference from the City. And while the Keene Street tale of a hockey house party a few years back is enough to warrant a headache, in the scheme of Providence’s housing woes, it’s small potatoes.

maybe broke up a source’s 30-year-long marriage while writing this story.

*Name has been changed.