Expressionistic recollections of a night in virtual reality 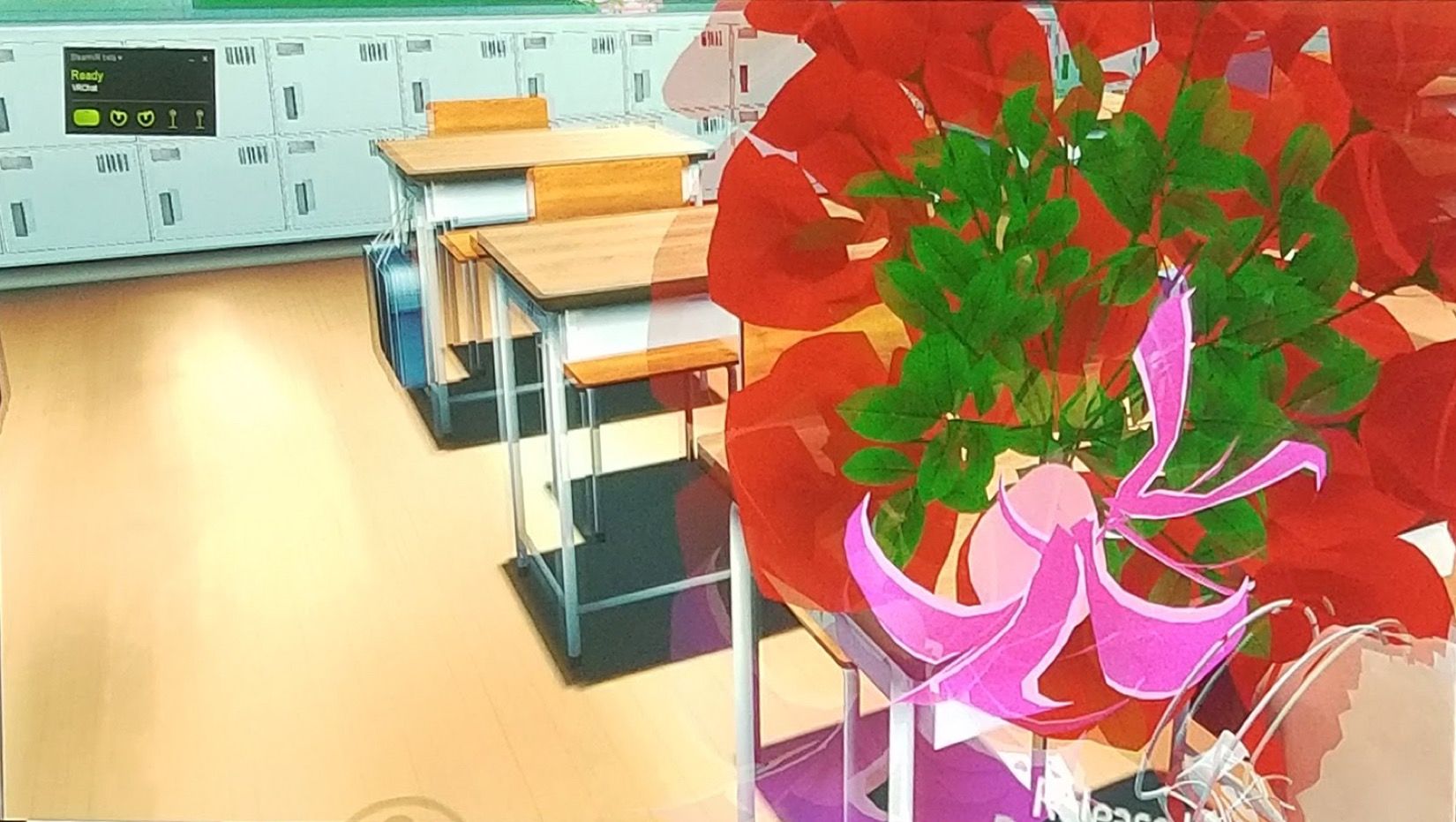 The worst part about virtual reality is how flagrantly interesting it is. You bring it up and everyone within earshot turns their heads, echoing—coincidentally? ironically?—the rotational and positional control schema of a VR headset itself. And without much insight, or imagination even, you and the interested parties can launch into a series of bold speculations: all hopes actualized, all promises fulfilled, flesh but a vestige, in the wake of VR’s technological developments. Man’s triumph over metaphor at long last, and a jolt of phantom pain from a simulated knife as the final nail in the coffin of the mind-body dualism…

But such speculation only bogs us down, situates us. No, we must move on—from the realm of pure hypotheticals to their uncanny realization, within the circumstantial bounds of a snowy January night and a closet space in Co-Works fabrication lab and from the perspective of a peevish, genotypically-XX college student—trappings of identity cast in lower or higher relief, depending, as vicarious worlds opened onto me.

Now, in media res, it was C, Zak and I: C being a professor and Zak being a close friend and C, Zak and I going into VR respectively because only one headset would work at a time, and the screen going gray because I had glitched it? Jamming on the triggers in my damp palms, it’s grey and I’m yelping and scared I pressed the wrong button but soon I realize that someone in the game has just placed a garbage bin over my head. Sorry sorry, he says and takes it off, How could you, How dare you etc. and, not listening, he dashes off.

(I mean dashing less in the sense of running than in the sense of a dashed line, as local movement here operates as a discontinuous teleportation mechanism. C says that panning straight forward though a scene would cause significant nausea, so they’ve developed a system where you move shorter or longer distances by aiming a dotted-line parabola that projects outward like pissing into the distance.)

The controls have taken some adjusting to... Along with the headset that holds rapidly refreshing OLED panels up to either eye, I’m given two handgrips, each with a joystick, pushbuttons, a roundabout slider and two triggers. The headset and grips are also apparently studded with infared LEDs tracked in space by a peripheral sensor to grant greater positional accuracy. Before Rec Room, C had dropped me in a proprioceptive primer app where I held still for a low-poly butterfly to land on my outstretched finger. Now in the Rec Room commons— a gym-type area strewn with corporate promotional kitsch like Frisbees and water bottles—I’m honing fine motor skills by using a tennis racket to lift the corner of a magazine off of a table. Manipulating these objects becomes the source of immense pleasure, thanks to the physics engine that so convincingly simulates their relations.

Now I exit the commons and enter a door marked "Charades." The way charades works here, we gather on a stage at podiums and a person in the center picks up a card and tries to express the word on it. They do so either through gesticulation or 3-D drawing extruded at the angle of one’s wrist and hanging in the air a few seconds like shaving cream on a mirror before solidifying and clattering to the floor. The drawings rock back and forth at points of contact, then dematerialize when the turn’s elapsed.

In between turns we talk amongst ourselves or to unseen companions. The man next to me says he needs a cigarette, and I anticipate his avatar’s rapturous collapse as he removes his gear to go smoke it. (His need for oral gratification recalls the incessant cries for pizza rolls that echo about the rec center. And the fact that, given the nondescript Rec Room avatars resembling nothing more than dot-eyed boxing dummies, and the ability to modulate vocal pitch from tenor to chipmunk, you can never guess someone’s age or nationality until they give accidental cues My ball, mine because the interesting thing about half of the people you meet here is that they’re actually small children and I say I don’t want that ball it’s of no interest to me And how C once was talking to a young woman and then a child approached and started calling him Daddy, and the woman Mommy and it was an awkward but interesting foundling scenario, for a bit).

At the end of charades, the game gives us all loot boxes containing a special item as incentive to keep playing. Great satisfaction in ripping the cardboard seal from the top of the package. The spoils of war… Today it’s a beret.

I am finding out one of the main risks you run in VR Chat is the risk of love at first sight. And if not a lasting love—still jarring and fatefully impelled. Unlike Rec Room’s clean, brightly-lit public location, VR Chat ‘gives us a taste of the nightlife,’ in a series of clubs, dive bars and house parties. You arrive at these spaces, through a portal or else a hologram navigation menu that projects from your wrist like a spy-watch, and you’re quickly taken up in the fracas. You’re accosted from all angles by this group of Caveman Spongebobs, Ugandan Knuckles in a ‘Looking for GF’ shirt and Fourth-of-July hat carting around more of their brood in a mini wagon, or else crucified DeadMau5 throwing off laughcrying emoji particles electrostatically, and then the floor clears a bit and you meet her gaze: the most beautiful girl you’ve ever seen in your entire life, hovering breathlessly at the far wall. Timidly you try and approach her, maneuvering around the Knuckleses (those scamps) but as you get closer you realize that what seemed like varicolored streaks in her hair is actually the Cool Ranch Doritos logo layered on top of itself, and—overwhelmed by her grace, her quietude, the sheer ultimacy of the encounter—you flee the premises before things can progress any further. (Due to the popularity of anime-style avatars, you can repeat this love/loss cycle ad nauseum in any server of your choosing.)

I should add, I arrived at this club as a wraith but now I’ve taken the form of a bald white cismale in a Hawaiian shirt. One hand is permanently clamped around a beer, but he’d probably call it a ‘brewski.’ I found the body frozen against a wall with a placard next to it reading:

As the digital social world grows, Eric wondered what will happen to us as these digital identities are stolen, and taken control of. As an experiment, he has released this model of his body to the wild. So for a couple of weeks, Eric is here as a clickable avatar for everyone!

In terms of avatars, I’m wary of the ‘flocking behaviors’ they can encourage, having briefly visited the tropical indoctrination island of the Ugandan Knuckles. When I become Eric, I worry I’ll be absorbed into a morass of Erics, but so far there are no other Erics in sight.

I bum around different worlds for awhile. I go to restaurants, cabarets, parties, a horror attraction with a user-instituted paywall. I see a lot of acid trance Mr. Meeseeks from Rick and Morty, clone troopers sunken half into the floor, and Minions with aurora borealis panning over their bodies like a cosmic rash. (Everyone makes fun of me for my Hawaiian shirt and Lakais, but I pay them no heed.)  Some of the residual angst from the Doritos girl I channel into dancing in the club with a large penguin hottie. Then I go to Time Square, which is just a hot dog cart surrounded by empty facades (not unrealistic). When you try to enter Sbarro or American Eagle, you’re teleported to the top of a tall building, with no recourse but to jump.

C was one of the first people to pique my interest in VR when I had his class over a year ago. One of his favorite metaphors is that VR ‘fell out’ of the high-resolution retina displays developed for smartphone screens—the headset just a box holding a high-res screen with two views slightly offset from one another, after all. It’s a tangential, almost accidental, development. But the question, as with its also inadvertently-developed cousin, LSD is: what can we learn from our experiences in another world?

As C roams the high school—dashing past lockers, basketball court, My Hero Academia posters—he speaks of the potential he sees in the medium. That one of his dreams is to create an emotionally-affecting VR experience that moves beyond the indie game trope of ‘an interactive journey through my depression’ in order to directly confront players with their own hypocrisy. Because there is something in VR he sees which abrogates, cuts sharp across players’ devious intricate channels of decorous ordering, lending it a political efficacy heretofore unrealized in gaming.

I learn a lesson myself, this night in VR, albeit at the last possible moment. Zak and I are getting ready to trudge back in the snow, and C has teleported to a chapel where he once witnessed one franchise character wed another 100-foot-tall franchise character (the details evade me...). But standing in as a de facto groomsman at the present wedding is this magnificent figure. Not magnificent in his appearance, but in the way he moves: flitting gyroscopically between every possible X, Y, and Z orientation. He gives the impression of a human asterisk or an agitated molecule or a cartoon fight where arms and legs jut out for just an instant from a cloud of dust, and what I come to realize is that: this man is my new teacher.

Answer: Your own center of mass.

But is that even true? Is it even so great a gift if it’s something I don’t actually want? What I really want is to throw mine away, or give one to every member of a live studio audience, Oprah-style.

Liby Hays B/RISD ’19 asks that you not put a garbage bin over her head until she’s properly adjusted to an environment.