Night of the Four Moons

Crumb, Lorca, and Harmony with Space 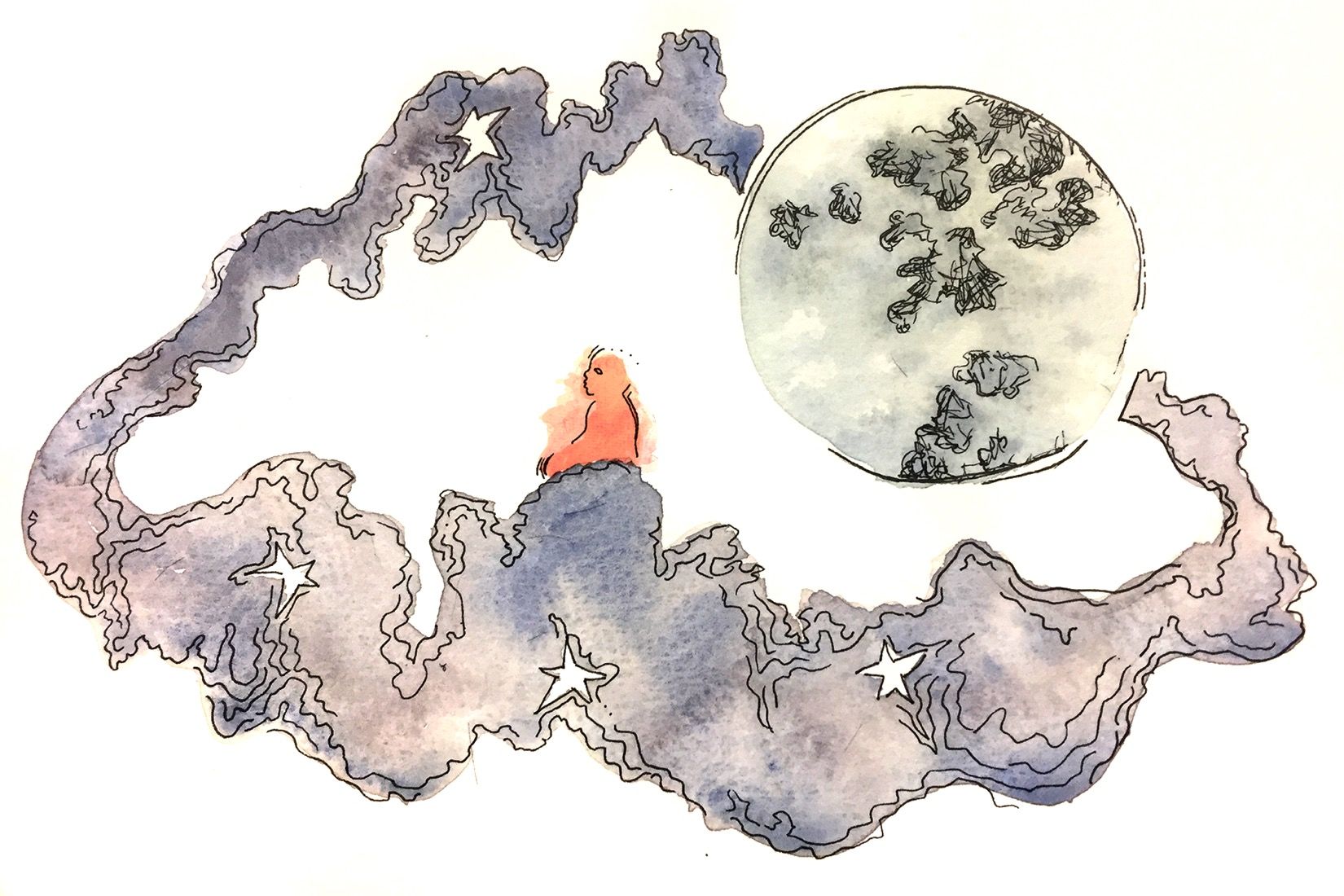 Every US president since the 1970s has announced some new plan to send humans back into space. Besides ‘inspiring millions,’ those advocating space flight do not often specify their reasoning. With ever-increasing advances in communication technologies, the science in space can be completed by robots. Space exploration is much cheaper without the need to keep people alive, which is one of the reasons that humans haven’t been back to space since the ‘70s. Practicality, therefore, is clearly not the first priority driving a push for in-person voyages. Instead, I think this desire is founded in something more malicious: a colonial view of humans as masters of the universe. When techno-aristocrats like Elon Musk philosophize about the need to preserve the human species, I wonder how exclusive their definition of the species really is. A human journey to Mars is a trillion-dollar diversion, making such species preservation available only to a select few: the extremely wealthy and predominantly white. And the discourse surrounding such a trip has long been peppered with references to “New World” exploration, Western expansion, and the like.

I’m a lifelong space geek. I’ve always been fascinated by my location, and by the simple thought of existing in a very large universe that also has many cool things in it (like liquid nitrogen geysers, battery acid rain, and ripples in time, for instance). This sentiment led me to spend my childhood checking out stacks of books on stars and planets from the library, and I still frequently plunge down Wikipedia rabbit holes about them. For a while, I was simply too enthralled by the idea of humans experiencing space firsthand to consider the colonialism connected to doing this. But the more I consider it, the more I realize that this idea comes from a human-centered perspective, which is limiting. Not only does obsession with in-person exploration play into the greedy and erroneous idea of being able to know and possess everything, but a self-centered view of outer space limits what humans can learn about space. In my view, space exploration shouldn’t serve to stoke human egos by convincing us of our own meager abilities. Instead, it should remind us of our finite nature, and make us wonder at the vast, amazing structures that fill the universe.

Now, imagine yourself in a concert hall: the audience quiets down, and a piece of music begins. Miniature phrases are passed between bongo drums, alto flute, banjo and plucked cello, while a vocalist strikes finger cymbals and quietly declares, “la luna está muerta” (“the moon is dead”). The flutist responds, whispering over their mouthpiece (in Spanish), “but it is reborn in the springtime.”

George Crumb is a living composer from West Virginia whose most famous works date from the 1960s and ‘70s. During these decades, when much of classical music was dominated by thorny, detached modernism, Crumb’s music was unfashionably emotional. Even though it’s dissonant, he experiments with bizarre spacings and colors in a whimsical way that draws in listeners more easily than most modern classical music. Crumb has been a key figure in the development of new extended techniques, such as touching strings inside a piano to modify their pitch, playing a gong using a bass bow, or changing the pitch of a timpani while striking a cymbal placed on top of it.

Crumb’s song cycle Night of the Four Moons was written in 1969, during the Apollo 11 flight. It’s scored for alto voice, alto flute, banjo, electric cello and percussion. In his program note, Crumb writes, “The texts—extracts drawn from the poems of Federico Garcia Lorca—represent my own rather ambivalent feelings vis-a-vis Apollo 11.” The 20-minute piece that follows is as urgently intoned as it is ambiguous. The second fragment of poetry—“When the moon rises, / The sea covers the earth / and the heart feels like an island in infinity”—is accompanied by slide banjo and Tibetan prayer stones. Their sharp sounds echo forlornly into a seemingly vast openness. Outer space is portrayed here as empty, but in a bleak, inhuman sense. It’s unclear whether Crumb shares my fascination with space itself, but when considering my own passion for space’s vast wonder, and the violent logic that is hard to untangle from this wonder, Crumb’s auditory depictions of space serve as a comforting mediator. This echoing world engages me by saying things that are much harder to describe in words.

Crumb has set Federico Garcia Lorca’s poetry in over a dozen pieces. Lorca’s verse and Crumb’s sound world share a sensuality and mysticism that feels more than it thinks. “I feel the essential meaning of the poetry is concerned with the most primary things,” Crumb says, “life, death, love, the smell of the earth, the sounds of the wind and the sea.” Lorca describes this sentiment as duende, which he calls a “mysterious power that everyone feels but that no philosopher has explained,” reminding an artist that “ants could eat him or a great arsenic lobster could fall on his head.” This sensual and ominous quality is palpable in the shouts, whispers, and flickers of melody throughout Night of the Four Moons.

Crumb’s mysticism, however, is tied to a sentiment of universalism, which has its own problems. “I feel intuitively,” he once said, “that music must have been the primitive cell from which language, science and religion originated.” While it’s very possible that humans sang before we spoke, I bristle at Crumb’s use of the word “primitive.” The universalizing gestures in his philosophy are touched by a similar mindset to the one that champions a human presence in space, even though he expresses skepticism about space exploration in Night of the Four Moons. One of Crumb’s philosophical influences is Carl Jung, who spoke of a universal collective unconscious, but nonetheless differentiated between supposedly civilized and primitive people. Crumb describes Lorca’s words as “primitive and stark... but capable of infinitely subtle nuance”; his use of “but” implying that primitive (that is, less developed) words wouldn’t normally be capable of such nuance, thus separating himself from the “primitive-ness” conveyed in his music. Crumb clearly sees ancient tradition as important, but glorifying the traditional as something that humanity has lost contains an implicit exclusion of those who still practice ancient cultural traditions in the present day. While Crumb’s music remains powerful, it’s important to realize that this music’s universalism fails to break from a colonial underpinning.

The final, longest song in the cycle sets an extended excerpt of Lorca’s “Romance de la Luna, Luna, Luna”. The poem, which Crumb calls “strikingly prophetic,” tells of a boy who is seduced and carried away by the moon, perhaps representing (to Crumb) the deadly allure of outer space to humanity. However, the poem is far from straightforward, the boy telling the moon to run away while the anthropomorphised moon warns the boy to “leave [her] to dance.” Crumb instructs the vocalist to sing the child’s lines “shrill” and “metallic,” doubled with warbling, insect-like high pitches on the cello that reinforce a sense of panic. The moon’s lines are “coquettish” and “sensual,” against a highly rhythmic backdrop, telling the child to “not step on [her] starched whiteness.” In the character of the moon, space may be presented as primordial, but not in a way that can be dominated, rather like Lorca’s arsenic lobster which could fall on the heads of humans and kill them. Likewise, humans may be presented in a universal, primitivist sense, but neither Crumb’s notes nor Lorca’s words cede humans control of their cosmic surroundings.

This is particularly audible in the song cycle’s memorable ending. As the dialogue between moon and child finishes, a bell is struck in unison with an icily high harmonic pitch on the cello, which slows down the listener’s sense of time. The next lines of the poem are yelled and whispered with a heightening sense of dread. Then, one by one, all performers except for the cellist slowly get up and walk offstage, playing their instruments as they go. Once all other players are out of sight, the cellist slowly slides to several more high pitches, soon coming back to rest on the original one. Crumb marks this line “musica mudana” (music of the spheres).

After more suspended anticipation on the same icy note, the “musica humana” responds from offstage, fading in and out at unexpected times like a radio signal. In a rich, warbling lullaby, accompanied by flute, banjo and vibraphone, the alto sings the final line, “por el cielo va la luna / con un niño de la mano” (“through the sky goes the moon / with a child by the hand”). This quiet, drawn-out closing is analogous to images of the little earth in space, viewed from the moon. Against the icy, dangerous vacuum represented by the cello, Crumb portrays humanity as a tiny, warm, ridiculous beauty. To me, this is more than just a ‘no place like home’ sentiment. Despite the fact that humanity is portrayed in a universal, generalizing sense, this sound world simultaneously conveys the absurdity of the human ego. The colonial subtexts of Crumb’s work create a lack of resolution around the colonialism of space travel, but Night of the Four Moons still reminds us that nothing humans can achieve stops us from being “an island in infinity.”

SEAMUS FLYNN B’21 prefers to think of this essay as one very long note outside the range of human hearing.