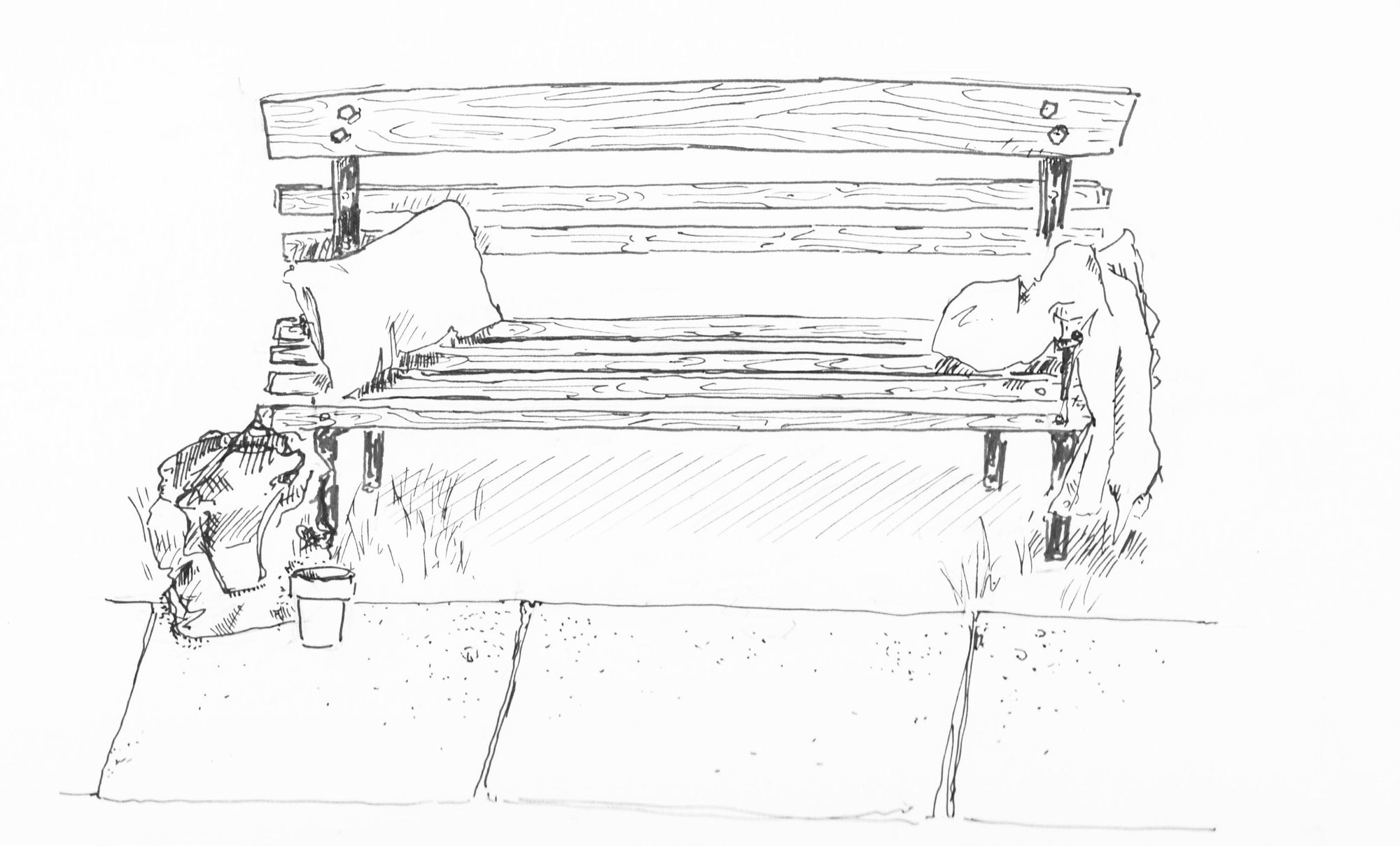 I AM IN KENNEDY PLAZA on an evening in early October when I meet John Freitas. Gray-bearded, wearing a vacation t-shirt and baseball cap and finishing his cigarette, he is rough around the edges but friendly. He jokes with the small group of student volunteers from HOPE, Housing Opportunities for People Everywhere, while we wait for the bus. John is the outreach coordinator of the Rhode Island Homeless Advocacy Project (RIHAP). Every night for the past four years, Frietas has taken a group of volunteers to make the rounds in the neighborhood of South Providence where Elmwood splits off from Broad Street. Starting from the Dunkin’ Donuts parking lot, John walks up Broad, takes a left into a residential neighborhood, and stops at a camp carved out of overgrown scrub, impossible to see from the street. He points out the bedding on the ground and tells me that there is space for as many as 20 people here when it gets crowded, but there is just one man here now. John asks him about the area shelters—who has hot water, who’s serving only rice and beans. The two briefly complain about services, but there is a marked difference in how they talk about the shelters; John was homeless in Providence for six years but now has an apartment, while the man he speaks to is still sleeping outside. Though the way John speaks about the shelters shows the intimate knowledge of a member of the homeless community, he also speaks as protector of that community, as an authority who mediates the ambiguous space between the homeless and the shelter system.

We leave the camp and walk back through the cemetery, then check behind McDonald’s and 7/11. John knows the spots where people sleep around here well, but it still struck me how often he needed to introduce himself. Even though he has been travelling this route seven days a week for several years, the homeless population of this small neighborhood of South Providence is large enough that there are, it seems, always new faces.

RHODE ISLAND HAS ONE OF THE highest costs of living in the country, and one of the top 10 rates of homelessness. In Providence, an hourly wage of about $20 an hour—a yearly income of $43,560— is necessary to afford a two-bedroom apartment at market value. According to a study from HousingWorks RI, the average renter in Providence earns $27,657 annually, making an average apartment far from affordable.

Housing is considered “affordable” if it costs 30 percent or less of an individual’s total income; across Rhode Island, 15 percent of residents are routinely paying 50 percent or more of their income for housing. Melissa Husband of the Providence Community Action Program estimates some households pay rates as high as 80 percent. The allocation of more than half of a household’s income to rent payments forces households to prioritize shelter over equally pressing needs—food, clothing, medical bills. Paying such a large proportion of their income for housing makes renters vulnerable to sudden financial changes, like layoffs or medical emergencies, which are often the tipping point where income is no longer enough to cover housing costs.

As housing costs rise and affording an apartment becomes financially infeasible, the semi-homeless—those who do not have stable housing but are not sleeping outside—enact strategies to stay inside. Husband says she often sees clients staying with relatives, cramming multiple generations into one apartment, and jumping from place to place without paying rent, staying as long as they can before eviction. Many end up in the shelter system. This presents another challenge, as many of the shelters in Providence are overfull; a 2012 survey by the RI Coalition for the Homeless counted 370 beds in all Providence shelters but 469 occupants. Those who stay at the shelters are a mix of individuals and families, the chronic homeless and the underemployed. Bernard Lessing of the Rhode Island Family Community Action Program says that 40 percent of the individuals who stay at their shelter are employed; Husband describes 65-70 percent of the households supported by their program as working poor, employed but still unable to afford housing.

JOHN'S MISSION FOR THE OUTREACH WALKS is simple: check in on the people who are sleeping outside and see if they need help. Tonight, we are leaving plastic bags full of blankets at the empty campsites because it is starting to get colder out. These walks are homeless advocacy from the bottom up. The work John and his volunteers do is not meant to be comprehensive, to get the homeless inside or in a job; instead, they intervene to meet the day-to-day needs that are not being covered by the shelter system. Some of the people we met were barred from certain shelters, and the reasons for expulsion can range from a personal disagreement with the management to a violation of the shelters’ rules against drug use. John tells me the story of a man who was evicted from a shelter, but was told that the reasons why were confidential and, as an ex-client, the shelter was not obligated to share the information with him. RIHAP’s initiatives are aimed at problems like this; they focus on homeless individuals instead of the system of social services. Their most recent success is the State government’s passage of a Homeless Bill of Rights, and John fills me in on their next project: creating regulatory standards for shelters to make sure their services are consistent and humane. The aggression with which he goes after some of these institutions for their bedbugs, cold showers, bad food, and mismanagement shows that the shelters occupy an ambiguous place from the level of the street. They provide important services, but abuses of power or misuse of funds do not go unnoticed.

We are walking through the cemetery between Elmwood and Broad, one of the most frequently used campsites in the neighborhood, when John notices someone sleeping upright on a sofa. This catches his attention, and Barbara, another organizer of the walks, attempts to wake her up, to make sure she is all right, but the woman is unresponsive to noise and shaking. Someone calls 911. Soon after, we see the flashlight beams of four EMTs coming towards us through the trees. Barbara explains, and the EMTs are able to wake the woman and get her on her feet, asking her questions about alcohol consumption. One of responders turns and advises us not to come around here at night because we could get hurt.

“We know these people,” he says.

“We know them too,” Barbara insists. “We’re here every night.”

“We really know them.”

The exchange is disquieting not only for the characterization of the homeless as dangerous, but also for the claim of “really knowing” them. Someone who only interacts with the homeless in situations that highlight addiction does not “really know” the homeless community. But according to John, many shelters do not understand the homeless community’s needs either, and the Outreach Walks offer a window into a specific experience of homelessness that cannot be taken as paradigmatic. Attempts to understand homelessness often lead to frustration and disagreement because it is such a multi-faceted issue. There is a powerful instinct to essentialize the homeless, but that in reality the homeless population is incredibly diverse necessitates widening its definition, challenging the location of homelessness as outside and other.

EMPLOYED HOMELESSNESS IS MARKEDLY PREVALENT in Rhode Island. Bernard Lessing attributes this to shifts in the state’s labor history. Lessing says, “Rhode Island, by and large, has been a working-class state, with the textile and jewelry industries…but what’s available now are jobs at the higher end where you need a BA or post-secondary education, so there are many families in the core cities that are struggling.” Most of Providence’s factories closed decades ago, but the lost jobs have not been replaced. The work that remains tends to be in the fast food, janitorial and service industries, with little security and few benefits.

Low wages are especially damaging when coupled with an insufficient affordable housing stock. In 2006, the state government passed a $50 million bond for the creation of new units and refurbishing of old apartments as affordable housing, and another $25 million was approved in 2012. But Jim Ryzek of the Rhode Island Coalition for the Homeless says, “If you look at the numbers, it’s really a drop in the bucket.” The money helps, but it is not enough to make up for such enormous shortages. Shelters are also dependent on federal money to keep operating, money that has been disappearing over the past several years. Ryzek says a federal grant that began in 2008 kept the growth rate of homelessness in the single digits.That federal funding was cut in 2012; the same year, the RI Coalition recorded a 12 percent increase in the homeless population.

When I asked Jim Ryzek what needed to happen to alleviate homelessness in Rhode Island, his answer captured the central tension in homeless advocacy: “You can… promote programs that build [housing] units and subsidize them to levels people can afford, or, you can have a living wage law at $20 an hour.” Advocacy groups tend to do the former; they lobby for cheaper housing or more space in shelters, but the dependence on the state that this approach entails leaves affordable housing vulnerable to budget fluctuations and changing political agendas. Homelessness is a problem, in part, because the task of providing shelter to people at every economic stratum is handled first by a market that has little incentive to build low-income housing, then second by social service groups that try to bridge the gaps. A solution like a higher minimum wage would give more power to those at the ground level to bridge these gaps themselves.

Ryzek dismissed a living wage law as politically unachievable in the near future. In the mean time, people like John and Barbara are walking, checking in, giving out blankets, and meeting the day-to-day needs of Providence’s homeless individuals.

When John walks into a campsite, he shouts, “Anyone home?” The choice of words recognizes that the space we are entering is private, not public—someone lives here.

ERIN SCHWARTZ B’15 is grounded.