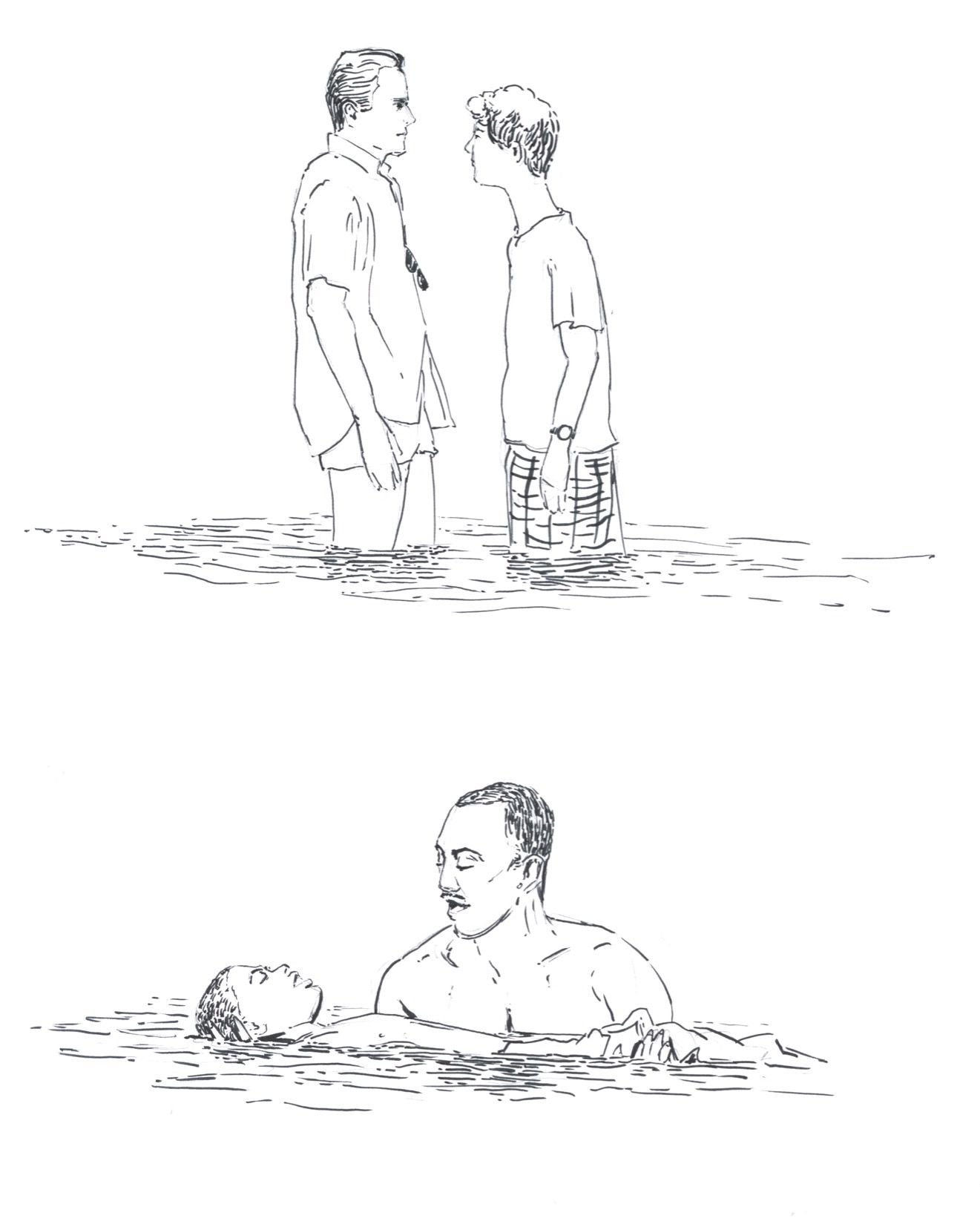 Queer films represent a break from mainstream cinema, which is usually intent on depicting heterosexual romance. In the past few years, there has been a surge of artistic queer films winning both commercial and critical acclaim from diverse, not necessarily queer, audiences. Two of the most acclaimed recent queer films follow drastically different plots unfolding in different backdrops. Moonlight follows a young Black boy growing up in a low-income neighborhood outside Miami trying to understand his queerness in relation to a Black conception of masculinity, while Call Me By Your Name (CMBYN) follows a young boy discovering his budding sexuality in the glamorous backdrop of Northern Italy.

Barry Jenkins, in his 2016 Oscar winning coming-of-age tale, Moonlight, navigates masculinity and queerness within the context of a Black body, revealing the persistent impacts of slavery even today. In the film, Black bodies are transformed in ways that both conform and rebel against the stereotypes shaped during slavery. In subverting common notions of Black masculinity in relation to queerness, Moonlight is able to envision a modern Black coming-of-age love story. In this love story, its main characters find that they can be reborn or baptized, transformed into non-enslaved bodies, becoming visible. This question of how to understand Black representation, as shaped by slavery, is something many Black artists grapple with, including Jenkins. Reclaiming depictions and navigating representation is what queer cinema is often centered around, choosing to focus on coming-of-age stories, a time when we tend to fight back against social and political restraints conflicting with personal identity.

CMBYN, adapted from André Aciman’s novel of the same title, has enjoyed enormous success, becoming Sony Pictures Classics’ third-highest grossing release of the year. It capitalized on the ‘Moonlight effect.’ It received praise for the actors’ performances, screenplay, and direction, ultimately receiving four nominations to the 90th Academy Awards, and winning Best Adapted Screenplay. The film tells the summer love story between 17-year-old Elio, played by Timothée Chalamet, and 24-year-old Oliver, interpreted by Armie Hammer. The film, exploring classical studies, philosophical thoughts, and the romanticism of European languages (the young character switches between English, French, and Italian throughout the film) ultimately builds up to a carefully crafted picture of queer romance.

Moonlight is set in Miami’s low-income, majority Black neighborhood, Liberty City—where Barry Jenkins and Tarell Alvin McCraney, the film’s director and writer, both grew up. Liberty City, first established in 1937, like many other majority Black neighborhoods slowly fell victim to racist urban renewal policies and neglect. Moonlight captures both the everyday beauty and the hardships of Liberty City through the eyes of Chiron, a small dark-skinned Black boy living in the Liberty Square housing projects.

CMBYN is set in an idyllic, European vacation home in Crema, Italy. Elio and Oliver are US citizens, but their relationship is consciously removed from the cultural and political context that American gay men in the ‘80s had to navigate. In 1983, the year that Elio and Oliver meet, the AIDS epidemic was beginning to cause panic in the American LGBTQ community. Yet, there is no mention of AIDS in the film. While the film’s removal from its context has been praised for giving a gay relationship the same narrative treatment that straight relationships receive in most films, it is one made possible by economic and social privilege. The only queer relationship that can afford to exist in an erotic Eden completely untouched by adversity is an elite one, screened off by obscene amounts of intellectual and financial capital. Moonlight, on the other hand, subverts racialized perceptions of masculinity and sexuality by depicting intimate relationships in unthinkable yet undeniably real spaces.

It is not uncommon for queer films to grapple with issues of trauma and rejection. Halfway through Moonlight, there is a heart-wrenching scene where adolescent Chiron is betrayed by Kevin. Grappling with his own sexuality, Kevin is literally forced to defend his masculinity by beating his object of desire, Chiron, in front of a circle of bullies. Jenkins delivers the brutal image of Black boys punishing another Black boy because of his perceived sexuality. With every blow, the boys are confronting their own relationship to masculinity, allowing the filmmaker to further explore the representations of the Black body on the screen.

By the end of the film, Jenkins’ stoic protagonist, having been provoked to violence, has transformed his Black body to conform with the Black community’s notions of the masculine ideal. Muscular and hardened by a stint in prison, Chiron has shed the vestiges of his childhood vulnerability for the swagger of the street. We fear that Chiron has disappeared, been usurped, conforming to the expectations of Black masculinity.

In CMBYN, the characters’ removal from any meaningful context allows them to be safe from such violence and trauma. The characters romance unravels freely, except for passing anxieties of rejection by family, religion, or the state. The film traffics in classical tropes; why can queer love be seen as a refraction of classical Greek pederasty only in CMBYN? Is queer love only legitimate in an untouched paradise accessible to only very wealthy and highly educated white men?

Part two of Moonlight portrays Chiron’s adolescent years, and his first sexual experience. Escaping from the torment that he faces daily, Chiron returns to the beach where he first learned to swim. Here, he encounters his confident childhood friend, Kevin. They sit in the moonlight looking out at the water discussing the sea breeze drifting into the hood. This is the first moment we see Chiron truly expose his internal life to another. Eventually they share a sexual moment on the beach. The romance and optimism of this moment is brief, and we do not see another expression of Chiron’s queerness or any sexuality till the end of the film when he is grown. We soon learn that though hardened, Chiron still longs for physical intimacy and visibility and to be recognized as a queer man.

Jenkins ends the film with a beautiful moment of intimacy. Kevin, now grown as well, returns to ask for forgiveness, and perhaps rekindle an unrequited love. It is an optimistic ending, letting us know that beneath the transformed Black body, lies a fragile man hungry to be truly seen in his totality. As the two men hold each other, now stripped of all disguises, the ocean sounds seep into the scene. The last shot is of young Chiron looking across the water at dusk.

On the other hand, can Elio and Oliver’s relationship even be called queer? CMBYN hesitates to read their relationship through anything besides the canonized and the safe. There is no transgression, none of the “strangeness” from which the word queer originally derives. For a highly-romanticized story of sexual awakening, there is basically no sex. The camera cuts at each moment of sexual possibility, showing the before and the after, refusing to show anything explicit. Meanwhile, the camera lingers on the heterosexual encounters between Elio and Marzia, not hesitating to show Marzia shirtless.

The sex we do see is either heterosexual or solitary. Throughout the movie, Elio is depicted having sex with inanimate objects (Oliver’s swim shorts, a peach), and sex then becomes more of a solitary act than a mutual sexual connection. That is not to say that queer fantasizing isn’t queer enough. It is the accumulation of such moments that is troubling. The graphic fixation that the camera has with Elio masturbating combined with the sudden prudishness it acquires when showing gay sex. In the end, the most dangerous— and at root homophobic idea—that Call Me By Your Name flirts with is that of queerness as a narcissistic love. Call me by your name, call you me.

The links between CMBYN and Moonlight are complicated yet worth exploring. It is undeniable that CMBYN has benefited from Moonlight’s groundbreaking work. A viewer could finish watching CMBYN thinking of Elio and Oliver’s relationship as a youthful, self-absorbed love that will eventually pass like a bad flu—as something beautiful and passionate that could not survive outside the boundaries of its particular paradise. But in real life, and in Moonlight, queer relationships exist in the world, a world that does not necessarily embrace their existence. Despite this, these relationships are surviving, and they are enduring.