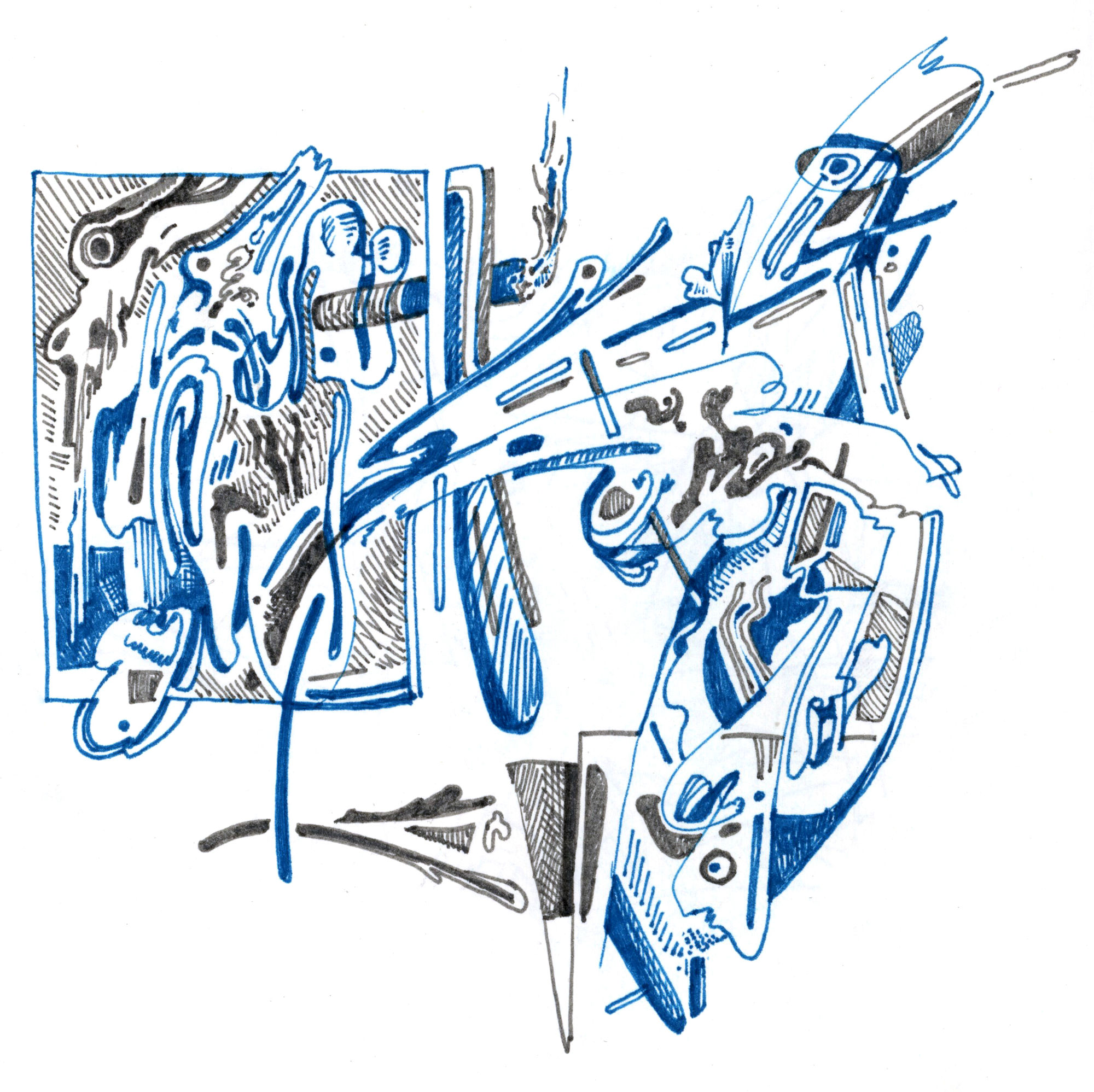 The February release of Car Seat Headrest’s Twin Fantasy (Face to Face) wreaked more psychological havoc on me than any other cultural event in my memory. Unwilling to wait until that evening to hear it, but with a day of back-to-back classes ahead of me, I walked between lecture halls in an anguished trance, playing the short snatches of the album I had time to listen to so loudly that the occasional passerby shot me an annoyed glance. During class, I could feel that my face was set in a rigor mortis of agony. Some of my friends asked if I was sick—it was, after all, flu season. I told them there was a new Car Seat Headrest album; they were all justified in rolling their eyes at me.

Face to Face is a remake of Twin Fantasy (Mirror to Mirror), an album Will Toledo, front person of CSH, originally released to Bandcamp in 2011. I love Mirror to Mirror fanatically, as do other nail-bitten, somewhat snotty gay teenagers almost everywhere. Face to Face sees Mirror to Mirror not only re-recorded, but also restructured significantly, with major lyrical and orchestrative changes throughout.

Twin Fantasy is, in both its incarnations, about a relationship. It follows its narrator through the tumultuous journey of falling in love and breaking it off with someone he refers to, variously, as “my boy,” “cute thing,” and somebody “in love with late-stage youth.” At the album’s start, the two “don’t see each other much”; later, the narrator doesn’t “know if we’re boyfriends yet.” By the end, he sings, “these teenage hands will never touch yours again, but I remember you.”
That is the key to Twin Fantasy’s take on love: the albums experience a relationship in reverse. Memory is everywhere in these albums. “Beach Life-in-Death,” the tragedy-in-three-acts of a second song, is framed by remembering: “Last night I drove to Harper’s Ferry and I thought about you,” the song begins, before describing a rainy picnic spoiled by a maybe-homophobic train conductor. Both albums take place in a similar past tense. 2018’s “High to Death” contains the repeated line, “I can’t turn this thing off / It keeps following me.” So, too, does this very formative, very difficult affection and its object. Twin Fantasy isn’t against the process of moving on, but the album’s narrator has little hope for his ability to do so. His development, arrested early on by the brutal kind of love, doesn’t quite seem to have resumed.

When I first listened to the 2011 incarnation of Twin Fantasy, I had just sent a text reading, “are u still in love w me”; it felt like fate. For years, my greatest guilt, a guilt over both how stunted I felt and the fact that I felt stunted, had been escalating. As every functioning heterosexual I knew seemed to go through the rites associated with aging—its passages and forgettings—I clung to things that had happened years ago with increasing fervor. To stop being in nascent love with the various friends I fell in nascent love with felt not so much like a betrayal as like an obliteration of self. I couldn't separate from them, even when I tried, because they had become me, and I them. Moving on seemed like an oxymoron—moving on to what? Any place I moved would contain places I had already been; no new place could contain me, because I couldn’t see past the old.

Mine was, at base, a hysteria over correct timelines. As a friend of mine put it, “You either have gay sex too early or too late.” Being a queer kid means doing everything at the wrong time and in the wrong order; it means never getting properly clear of your past or finding a recognizable home in your future. I couldn’t fathom my future self, and when I tried—gay-married, probably in a poorly heated row home in the city where I grew up, with, what, a sheltie?—it felt like I was writing fiction. Such futures never feel real; it seemed more probable that I would vow celibacy, or give up and marry a male friend, or die in one of the ways dykes usually die on TV, by breast cancer or a drunk driver. I felt, acutely, like I would be crying at a gas station over some imagined slight from a shiny-haired friend for the rest of my life.

Twin Fantasy’s most critical insight is triple-pronged. The albums see first, what matters so much about first queer loves; second, why first queer loves can be so frustratingly unshakeable; and, third, what it is actually like to live, every day, with something you cannot shake.

What makes first queer love matter? In Twin Fantasy, the narrator’s desire to merge with the one he loves is central both to their relationship and to the narrator’s conception of himself. In “Twin Fantasy (Those Boys),” Toledo sings, “They just want to be one, walk off into the sun / They’re not kissing, they’re not fucking—they’re just having fun.” Wanting to see yourself in another person, for your two faces to become one, is a part of most coming-of-age stories and of most relationships. But in this relationship, as in many early queer ones, two different modes of mirroring—as romance and as self-reflective tool—are bewilderingly blurred. When the person you see yourself through is also the person you are learning to be yourself from, both processes become much more fraught and much more frightening. Usually, gendered expectations relegate ‘what-can-I-be-and-what-do-I-look-like-from-this-particular-angle’ to same-gender friendships and ‘who-am-I-really-and-why-do-you-love-me-anyway’ to straight romance. When same-gender friendships entangle with romance, these two very different kinds of mirror must merge into one. The resulting self-insights can be very, very intense, and not always pleasant.

That unpleasantness comes through clearly on Twin Fantasy. “The ancients saw it coming. You can see that they tried to warn us … They said sex can be frightening, but the children were not listening,” Toledo sings on “Beach Life-in-Death,” concluding that “everyone grew up with their fundamental schemas fucked.” Rarely does one come out of their first queer love without having been frightened, by sex or by any number of other hurdles. Even more frightening, though, are the ways that these relationships can alter fundamental schemas. It has crossed my mind that my own schema may be fucked beyond repair by what I can’t stop remembering.

One of the binding refrains of “Beach Life-in-Death,” a line that repeats at the song’s end in an interminable trance, is “The ocean washed over your grave / The ocean washed open your grave.” At the center of this song is the conviction that certain pasts are impossible to get properly clear of: some bodies are buried and disinterred anew each day.

Some bodies, through their sheer power, are impossible to keep dead. First loves scar and warp and build; first queer loves scar and warp and build without blueprint. First loves usher the lover into adulthood, but first queer loves usher the lover into a territory for which there is no map, no path, no getaway vehicle. That might be a fair definition of adulthood, but to realize all at once that your life will be scriptless because of your love is different from realizing that your life will be scriptless in spite of your love. First love insists the latter, first queer love the former. It is almost impossible to excise the memories attached to such a brutal realization. Growing up is often framed as a process of discrete stages, each one cleanly entered and exited. Personally, I have emerged—to whatever extent I’ve emerged—covered in the viscera of what was.

But Twin Fantasy (Face to Face)’s largest revelation lies in its even deeper conviction that to live with a past is not a death sentence. The album’s earlier incarnation plays like an hour-long fever dream of grief. This 2018 version is sad—sometimes excruciatingly—but it makes an argument best summarized by the end of “Famous Prophets (Stars),” during which Corinthians 13 is recited:

Love never fails. But where there are prophecies, they will cease; where there are tongues, they will be stilled; where there is knowledge, it will pass away. For we know in part and we prophesy in part, but when completeness comes, what is in part disappears. When I was a child,  I talked like a child, I thought like a child, I reasoned like a child. When I abandoned my childhood, I put these ways behind me. For now we see only a reflection, as in a mirror: then we shall see face to face. Now I know in part: then I will know fully, even as I am fully known.

Sometimes, it’s necessary to stay in the past until you can see it clearly. This verse—and Twin Fantasy as a whole—lets nobody off the hook for the suffering and transgressions of their past selves. They call on us to turn back and examine the pasts that contained those selves with the final clarity of love. Our duty is to put childish ways behind us and look for what we could not see before—to know fully, even as we are fully known. To meet the people we loved, and the people we were, face to face, and look them in the eye.

Since Will Toledo made the decision to re-record this entire album seven years after its original release, I doubt I will stop being in some version of my fifteen-year-old love any time soon. I am, anyway, still a queer kid, only a slightly older one. But I no longer see dwelling on love as a tragedy, or love itself as tragic. I am lucky to have been known fully, and I am lucky, now, to be nearing the point of fully knowing. Corinthians 13 is an argument, more or less, for truth as a function of love. Three years ago, I would have rolled my eyes at that. Now, remembering who I used to be and who I used to know, I think I have only ever seen truth, whatever that may be, through the lens of love.

I don’t know that I can go so far as to say I’m grateful that my life is so structured around seeing backwards, archiving my own history. Maybe it does stunt me; I wouldn’t be surprised. But I know that the process of archiving has made me more capable of unclouded sight than if I hadn’t known what it was to gain and love and inhabit and lose a twin. It is rare that queer kids grow into callow adults; the lucky ones resist the opposite pull toward jadedness, too. We have no choice: the ones we love early on are mirrors to us, reflecting us as we reflect them, and mirrors break.

“When the mirror breaks, I wouldn’t miss it for the world,” Toledo sings in “Famous Prophets (Stars).” Neither would I. My initiation to myself was fast and growing-painful—so, I still have stretch marks. I am glad to have grown, and I am glad to carry indelible reminders of that growth.

CATE TURNER B’21 prefers the King James version of Corinthians 13, but forgives Will Toledo for his translation choice.