Climate discourse and its call to action 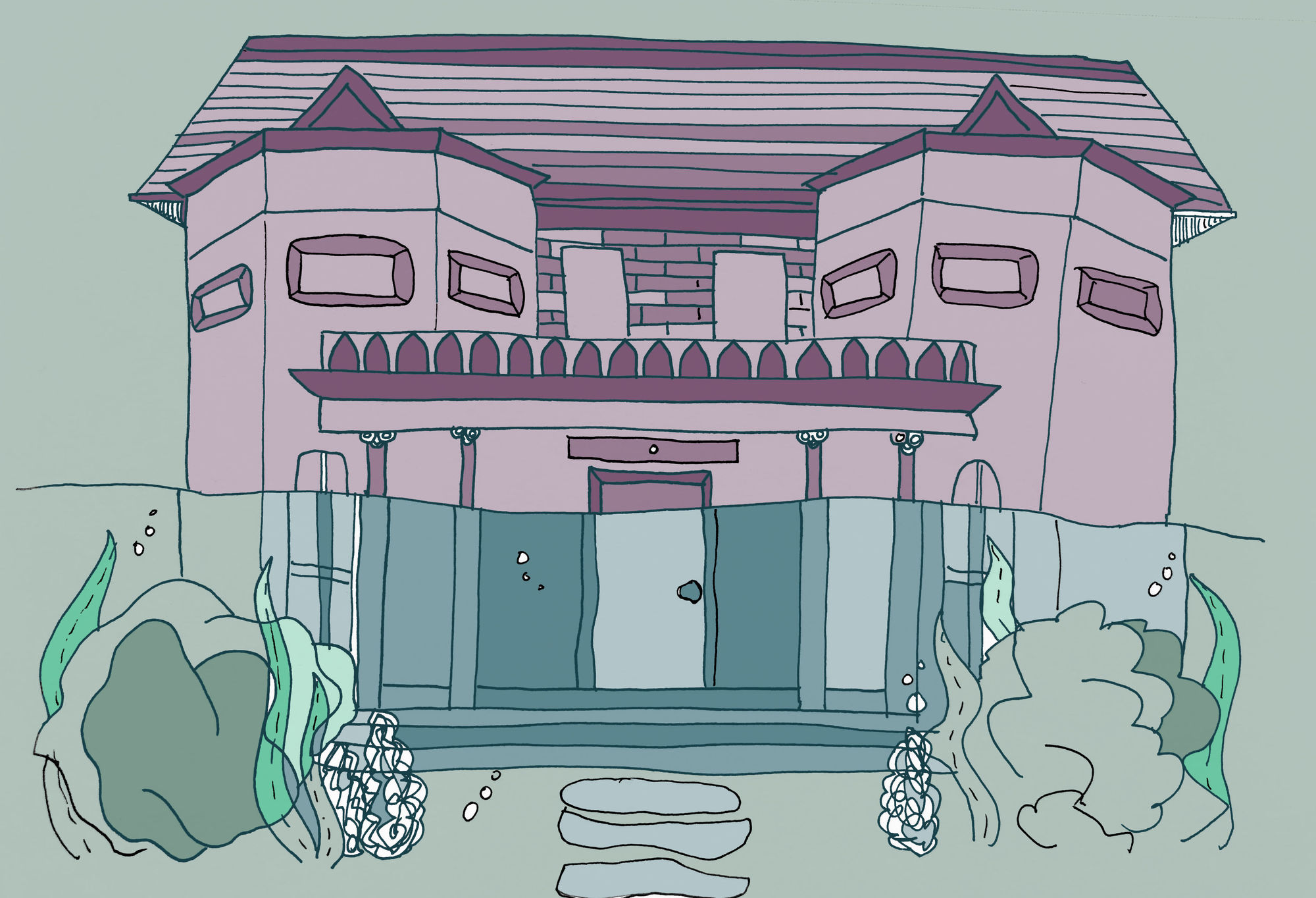 “Providence has a troubled but productive history with the sea,” Barnaby Evans said to the attendees of the monthly Jewelry District Association meeting in Downtown Providence on February 13. Evans, who is best known for the beloved event WaterFire, was speaking to a small group of engaged citizens about the environmental concerns Providence faces, specifically the rising sea levels due to climate change. “We’re going to be getting 9.6 feet by 2100, but that doesn’t even include the storm surges and swell heights that would happen during typical storms,”  he went on. The National Atmospheric and Oceanic Association (NOAA) puts that same prediction slightly higher, at nine feet ten inches.
Currently, a large portion of Downtown Providence is on land that is less than ten feet above sea level. By 2100, unless some sort of drastic action is taken, Kennedy Plaza, City Hall, and many other focal points of the city will be flooded. Hurricane seasons will inevitably heighten these predicted day-to-day conditions. With the city’s occasional storm surges, the NOAA predicts that Providence could be facing waves that are 30 feet higher than today’s sea levels. At this height, the Fox Point Hurricane Barrier, which was constructed in 1960 and designed to withstand surges only up to 25 feet, would prove futile.

Evans spoke pragmatically about the future of Providence, but ended his speech by proposing a massive infrastructure project to combat rising sea levels caused by climate change: a 40-plus foot high wall that would stretch across a large portion of the Providence Harbor, larger than the current Fox Point Hurricane Barrier by I-195. Treading the fine line between reactive and proactive rhetoric, his presentation revealed the difficulties of talking about climate change. News coverage about changing ecosystems often prompts major environmental infrastructure projects, like a Providence hurricane barrier. “The problem is that leadership can’t get elected with such large-scale plans,” Evans lamented. “We need to change the mindset of the electorate.” But changing public opinion involves heightening awareness about the future that climate change will bring, while ensuring that people understand how and why climate change is happening.

The news we consume about climate change most often covers crisis-level weather events and comes from national news outlets. In the past year, the most highly covered weather events were hurricanes Harvey, Irma, and Maria, which hit the North American coastlines and the Caribbean. In national coverage, news anchors use myriad ways to discuss major weather events, from data and Doppler maps to the personal stories of those affected by storms. While each of these narrative techniques plays a part in covering these weather crises, the media’s language often refers to storms as monsters with minds of their own, thus orienting viewers towards an antagonistic relationship with the environment.

On August 26, Rob Marciano of ABC reported live from Port Lavaca, Texas during Hurricane Harvey, saying, “This storm continues to impress,” adding, after a pause, “unfortunately.” Yet this kind of reporting is tame compared to the usual hyperboly. Reporting for ABC on September 11 about Hurricane Irma, Elizabeth Vargas said, “There’s no turning back now. Hurricane Irma: Monster Storm.” Vargas makes a point to emphasize the destruction that the hurricane had caused, implying that this confluence of condensation, winds, and air pressure had malicious motives as it moved across the state of Florida.

In national news coverage, weather events are positioned as an enemy for survivors, first responders, and local officials to overcome. Even technical names anthropomorphize storms, portraying them as humanoid enemies. Hurricanes were first given human names in 1957 to prevent confusion over the multiple hurricanes that hit the East Coast each year. This naming succeeds in giving each storm a distinct identity. However, referring to this phenomenon as personification is ultimately inadequate, as the language quckly turns to a kind of demonization, referring to the storms as inhuman forces. Whether it’s a monster storm with stubborn determination or wrathful waves striking the coast, the media’s language so clearly depicts extreme weather events as an enemy for humankind to defeat that it creates a dangerous paradigm in which to establish ourselves in relation to the environment.

Global warming is occuring as a result of humans treating the environment as a resource to extract, pillage, and use for our own gain. By portraying storms as savage, erratic beasts, the narrative of human dominion over nature is continued. Only 62 percent of Americans believe that climate change is caused by humans, according to a Gallup poll in March 2017. According to an article in the journal Nature Climate Change by Stephan Lewandowsky, Gilles E. Gignac, and Samuel Vaughan, public concern surrounding the dangers of rising CO2 levels is actually decreasing. As news coverage continues to describe weather events as an enemy that we must defeat, and due to the overlap between climate change and extreme weather events in the public’s mind, climate change is included as a thing to conquer.

“Providence has a natural geomorphology that consists of 30-plus hills,” Evans explained. This geomorphology made the Fox Point Hurricane Barrier constructable in 1966, and it is what makes another, taller, longer hurricane barrier viable in the future. Such a project would cost millions of dollars, but it might be the only thing that would keep wealthier areas of Downtown Providence dry with rising sea levels.

This kind of infrastructure project, essentially a wall, mirrors the rhetoric of climate discourse that positions humankind as wholly separate from nature. Barriers serve to protect privileged populations from the effects of climate change, providing a solution to the symptoms of a warming planet rather than working to address the underlying causes. Additionally, these projects concretize the narrative that plays out daily in the news coverage of weather events: to be safe, humans must fight nature.

However, there are other outlets that give readers climate-based coverage in ways that encourage more nurturing relationships between humans and the ecologies they exist in. ISeeChange provides an online forum for citizens to self-report various weather-related and environmental updates in their areas. Each post (usually including a photo, some text about the user’s experience, and a location tag) is automatically attached to a string of data taken from the time of the post, ranging from temperature and CO2 levels to wind speed and cloud coverage.  This site helps to increase awareness about climate change while, unlike alarmist news stories, promoting the idea that we exist as living beings within the environment, not apart from it.

There can be problems relying on individual sightings though, especially if they are taken out of context. Seeing a large number of sightings in your local area that seem to dispute global trends can cause users to draw misleading conclusions. However, ISeeChange publishes summaries of the sightings in different areas of climate and the environment, consciously working to prevent those kinds of localist conclusions.

A series of sightings about irregular levels of snowfall posted on February 2 covered the effects that climate change can have on the quantity and intensity of East Coast snow storms. “A little snow isn’t unheard of in Spring Hope, North Carolina,” the author of the story wrote. “Autrey said that her town, located 30 miles northeast of Raleigh, can usually expect a few dustings a year. The most recent winter storm brought four inches of snow to her backyard.” The post juxtaposed this sighting with a sighting from Paonia, where there are usually many snow storms moving through the area in the winter. “January 9 in Colorado and it’s 50 degrees,” the sighting stated. After bringing in scientific opinions on the causes for these seemingly oppositional sightings, the author explains that “climate change affects winter weather patterns and [we] note that in some cases a warming planet can cause a colder, snowier winter.”

In these summaries, ISeeChange often tends towards a kind of sensationalization too, but in a way that is less dangerous than national news networks.  By bringing together local sightings from across the country and combining them with the expertise of university academics and NASA-employed environmental scientists, ISeeChange raises awareness about climate change by treating the environment as a system of interacting natural elements, rather than a malevolent entity intent on damaging human society.

The discourse around the changing ecosystems we live in is an important impetus for creating major environmental infrastructure projects, like a greater Providence hurricane barrier. Besides massive economic costs to the state, even with federal funding, there is also the question of what a 40-plus foot wall emerging from the Narragansett Bay would do to Providence’s image.

Our climate change coverage is nearly as unstable as the ever-changing environment which we inhabit. Rising sea levels are a reality, and to protect those who are not able to move inland when the water comes up, governing bodies have a responsibility to act. How we classify our relationship with the environment is crucial to the kind of action that we will see in the coming decades. If narratives that depict a histrionic, demonic environment continue to make up the majority of our news coverage, then the action we see will follow suit.

TED CATLIN B’20 wants you to stop calling the weather mean names.