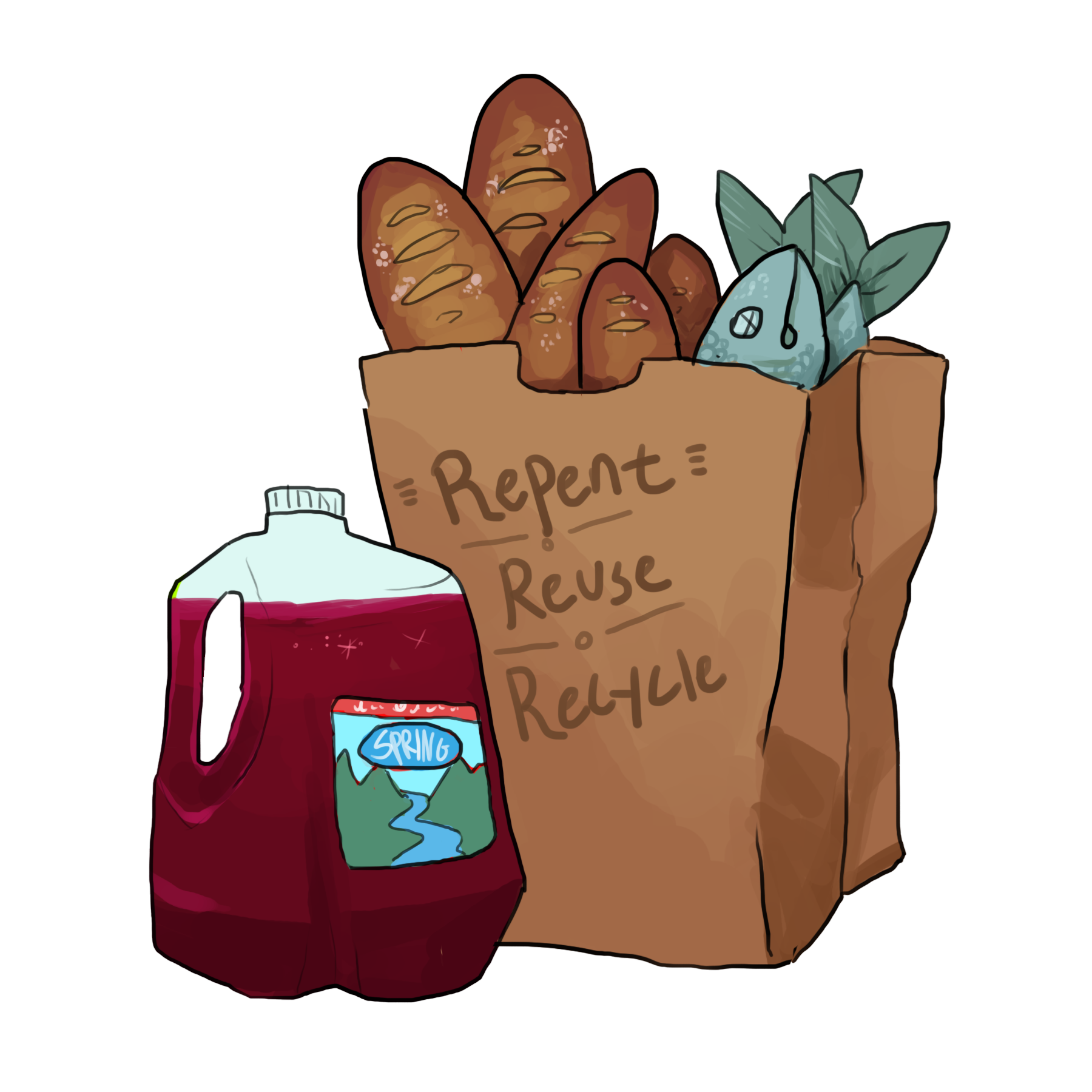 “For dust thou art, and unto dust shalt thou return.”  This is the Genesis verse heard around the world as Christians gathered on Ash Wednesday, this year on February 14, to mark their foreheads with the sign of the cross and begin the penitential season leading up to Easter.

Plastic microbeads, however, do not return to dust as easily as our mortal flesh. Thankfully, the Church of England has officially declared that single-use plastics are the sacrifice of choice for this year’s Lenten period of fasting.

“Conservatives care about conservation,” said no American ever. Also said British member of parliament Vicky Ford to the Telegraph UK. Ford has led the charge of 41 conservative politicians, as well as thousands of Christians, to commit to carrying tupperware everywhere they go for the next month and a half.

It all began with a prophetic message from the beloved Sir David Attenborough on his fall 2017 BBC documentary series, Blue Planet II. White hair blowing in the wind, standing before the blue sea, Attenborough pulled at the heartstrings of the nation as he narrated over devastating footage of poisoned animals. “I genuinely have a hate for humanity when I watch blue planet 2” reads one angry Twitter reaction among many responding to the series. This isn’t quite the message of the gospel, but the sentiment impassioned the masses. In the months following, a wave of action swept the U.K.: the Queen announced a plan to decrease plastic usage on royal estates, the Scottish Parliament banned plastic straws, and a ban on plastic microbeads has taken effect in Britain. Several businesses, including the BBC itself, have followed suit (Al Gore is crying tears of joy).

Lent, a period of fasting leading up to Easter, is meant to emulate the 40 days Jesus spent in the desert praying and resisting the temptations of the Devil. Reimagine the Devil as all plastic surfaces and the desert as our grocery stores, and you have the consumer hellscape of temptation thousands of Brits have been living in for a few weeks now.

Often miscast as a time for self-improvement, Lent is really a reminder of our own mortality. The Independent thinks there is no better way to dwell on the ephemerality of life than to consider that the wrapper you’re about to toss will outlive your body by several centuries. Thankfully, the Church has provided a handy Lenten calendar with enthusiastic messages like “The earth dries up and withers, the world languishes and withers; the heavens languish together with the earth. The earth lies polluted under its inhabitants …” (Isaiah 24:4-5), along with tips to start using bamboo toothbrushes and to avoid the mini bar of snacks and drinks in your hotel room.

If our beloved blue planet is to make it to 2050 without tons of plastic in the ocean outweighing tons of fish, as is currently predicted, then the Indy predicts that the plastic fast will have to span into the season of advent, aka Christmas, that holy time of hyper-consumerism.

Since the turn of the new year, several households across North America have been baffled to find a stream of Amazon packages on their doorsteps—packages they didn’t order. Molly Schoenecker of Minnesota, for instance, has received 24 anonymous packages since last fall. And the Schoeneckers are just one of the families affected. Molly, who lives with her mother, initially thought it was nothing: “I didn’t think much of it at first. I thought it was funny.” But before she fully embraced her good luck, one box arrived that was definitely more unnerving. “This one is bad,” she told her mother, when she opened the third unopened package. It was a sex toy.

That’s when Schoenecker decided it was time to start investigating. She first called Amazon Customer Service, who provided her with the name and email address of the anonymous sender. She didn’t know who he was, so she sent some inquiring emails. The Independent has no intel on the content of these emails, but speculates that subject lines may have read “we have your cookie cutters” or “misplaced sex toy.” But even such wild emails weren’t enough to get the mysterious gift giver’s attention. Schoenecker never heard back. In the past week, her family has received even more packages, whose contents included baby booties, essential oils, a hair straightener, and another sex toy. They are reportedly planning to donate all (all?) of the items to charity.

The Schoeneckers are not alone. Another couple in Boston, the Gallivans, has received more than 25 packages from Amazon that they did not order. When asked what it was like to be caught up in such an enthralling mystery, Mrs. Gallivan responded, “We’re just plain, ordinary people.” Mr. Gallivan added, “We don’t want any part of this. But the packages keep on coming.”

Keep on coming, they do. In late January, several Canadian university student unions began to receive stacks of boxes. The content of these boxes was similarly erratic: cell phone chargers, odd kitchen appliances, and an intermittent sex toy. Students initially believed it was some sort of hoax from a rival university, but became skeptical when the items’ worth topped 1000 dollars. “It seemed like an awful lot of money to be spending on this elaborate prank,” one student mused.
After months of futile complaints to Amazon Headquarters, the Gallivans called in backup. Sean Murphy, an investigative journalist from the Boston Globe was stumped as well, and followed up with his own memo and inquiry. The company finally replied. “As the bad actors get smarter, so do we,” they wrote. “Amazon is constantly innovating to improve the customer experience.”

“Koch funnels millions into Brown, riling the left,” shouted the front page of the Providence Journal this past Saturday. The Journal article revealed that the Koch Brothers have donated about 3.2 million dollars to Brown University since 2008.
As the article outlines, this money was donated to the Political Theory Project (PTP), a think tank at Brown University led by libertarian political theorist John Tomasi. The research center, which describes its mission as investigating “the ideas and institutions that might make societies free, prosperous, and fair,” runs a yet-to-ever-be-published undergraduate philosophy journal and a student organization so boring students are paid to be in it. In 2016 alone, the organization received more than 600,000 dollars from the Kochs, prompting allegations from national organizations, like UnKoch My Campus, as well as both Brown students and faculty. As one activist says in the Journal article, “The Koch network is essentially buying the legitimacy of Brown University for their own private gain.”
But what I don’t understand—and I think readers will share this confusion—is why people are so upset about the Koch brothers’ money being used to support academic initiatives. Is it really so bad for a sweetened carbonated beverage corporation to support the PTP? Is it just that critics would prefer a Pepsi? Who doesn’t like the refreshing taste of a cold Coke?

For instance, the article quotes Brown Professor J. Timmons Roberts saying, “They fund research to support their extreme positions, and to capture the hearts and minds of young people.” But is it really so “extreme,” Mr. Roberts, to enjoy the taste of Coke’s bubbly sweetness?

As anyone who has imbibed a Coke product (say, an Honest Tea, or perhaps even a Fuze Tea) knows, not only the hearts and minds but also the mouths and midriffs of young people will be hooked on the gently sweet taste of soft beverages, like an Odwalla, before they even have a chance to be indoctrinated by the PTP. Plus, critics refuse to acknowledge that the downsides of Coke funding hardly compare to the alternative of not being able to drink a cold hard Ciel at the end of a long day spent theorizing about the free market.

For the sake of argument, however, I think the liberal critics do have one fair point to make: Professor Tomasi frequently stresses the importance of pluralism—meaning that he brings speakers from both sides of any debate to speak. But my question to Mr. Tomasi, one that critics have curiously not mentioned, is: isn’t it hypocritical to proclaim these pluralistic values and then so clearly take a side on the enduring Koch-Pepsi debate?

That complaint, however, is not major enough to warrant such fierce criticism of the PTP. After all, Coke is often a champion of progressive causes that critics like Professor Roberts, an environmental alarmist, support. Coca-Cola’s 2016 Sustainability Highlights reports that 50 percent of their lemons grown in 2016 were “from more sustainable sources than in previous years.” After all, it’s not like Coke founders helped build oil refineries for Hitler or anything like that.
In conclusion, it seems like there are more questions than answers about why people are so upset with the Koch’s beverage money making its way into Brown. Or maybe I’m just confused.