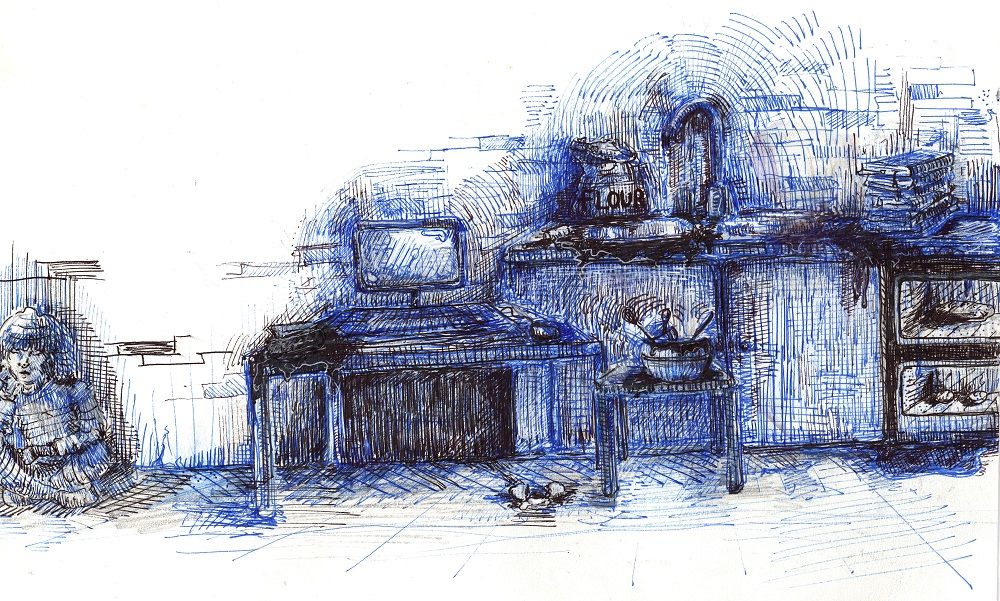 I’ve started talking about bread like some people talk about finding a particularly inspiring spinning instructor. Nobody talks about finding religion, but perhaps this analogy works, too. I talk about my sourdough starter all the time. I drop a line about it into a writing sample. I document the process on Instagram and gleefully receive direct messaged tips and recipes from those with more bread experience. I become addicted to a Youtube channel called “Alex French Guy Cooking.” I hear of a new texting antic—diet ghosting, if you will—called “breadcrumbing,” where instead of cutting contact, you wait too long, then finally respond with a one-word answer.

My first sourdough happened in the snow, which made for trouble rising. And since the only thing bread really does in order to become bread is rise, I’m not sure what to call the compact, flaxen rock of dough that I pried from our dorm-kitchen cubby-oven. That’s what I get for trying. Fermentation hates the cold, and the only thing sourdough does in order to be sourdough is ferment. Ideally, mixed with flour, the starter breathes, expands, and pushes air up to the surface, desperate to break into the warm air. Lactobacilli multiply. A good starter rises bread into bread. Mine sat in the cold. No air bubbles gravitated to the cold room. The lactobacilli shivered.

At first, once a day, you discard half the starter and stir in a fresh cup of flour with half a cup of water. Warm water if you have a cold kitchen, and cool water if the kitchen runs hot. “It sounds like you’re holding an animal hostage,” I was told. It does, but the starter won’t die if I feed it a little late. That take-out container of hissing bubbles is a thing of pretty resilient stuff. Fruity is the proper word for its sour aroma. ‘Fruity’ is the baker’s word to describe the starter, which is also called a mother sometimes. After the third day, it is ready to be fed every twelve hours.

My friends made fun of me the week my starter was brand new. “I have to go home and feed it.” Then it became her. Then her became Ursula.

9:00 AM. I talked to my friend at home on the phone—squished between my shoulder and my ear so I could stir down the starter with my other hand while I listened. She told me her favorite author died the day before, on January 22. I didn’t know that she was her favorite author. “Can I name the starter?” she asked.

Can you spray water into an electric oven? Thinking about it now, the answer seems to be ‘no.’ Anyway, I did because the author of King Arthur Flour’s web page said to spritz some on the bread at the end of thirty minutes of baking. Makes for a softer chew. King Arthur’s instructions are nice, but I used Gold Medal flour because they sell it at MiniMart, and MiniMart is 34 steps from my door, and it is snowing, still.

I looked into the dangers of spraying water into an electric oven. You can, and in fact, it’s recommended to counteract the drying that an electric oven does. Bread hack: Steam the oven.

I have this idea of myself: that I am the type of woman who bakes her own bread. The idea is bigger than I am, the individual, or bread, the food. The idea comes with an idealized escape scheme. There’s a farmhouse and brambles of blackberries, and my aunt’s plant-derived hand-dyed fabric, and jars of deep pink beet pickles in Door County, Wisconsin. And successful sourdough.

I’m in a cinder-block-walled dorm, which thwarts the warm, moist conditions bread-making needs, according to the web. But cinder blocks seem warm when the room smells like baking bread, even if that’s usually an instant pumpkin loaf with Crisco-brand canola oil and 100 ingredients ending in ‘–ose’ that I can’t pronounce. Just like that chapter in Fast Food Nation that is just a list of the ingredients in a McDonald’s strawberry milkshake. I love strawberry milkshakes, though, and I dream of a test kitchen with endless ingredients, chemicals, and possibilities.

When I tasted the lump of undercooked cracker dough, my imagined jars of pickled beets shattered, soiling my idea of self with salty pink juice. I was farther from homemade than I’d thought. The type of woman I want to be was backtracked—one more bread-attempt away than she was before I held the heavy, sourdough failure in my hands.

When choosing to grow a sourdough starter in a cleaned container that once housed some take-out Thai, a lot of flour is consumed. Two cups a day. The bread kick manifested even before I came back to Providence. My dad, prescient as ever, and aware of how obsessive I can get, nudged me gently to focus on schoolwork. After observing ninth-grade-me make 23 batches of French macarons until the ‘pied’ curled up just right and the tops were glossy and un-cracked (fold the meringue 17 times exactly before mixing in powdered sugar and almond flour), he predicted, somehow, me leaving an information session to feed my bubbly aromatic friend on time.

9:00 PM. I feed Ursula and then I go to a party with sourdough starter caked on the wrist of my bodysuit.

Bread happened well before high-power dough hooks and high-tech kitchen scales that bump between ounces and grams at the touch-screen tap of a finger. But I still wish I had those modern-day bread making tools here. The last thing that happens to the risen dough before it goes in the oven: you score it. Quick, confident, and deep, you drag a knife through the surface. This started back when towns had one, central, communal oven, and all the loaves were fired together, rising together, in real flames. Scoring was how bakers identified their loaves—once a signature, or an enforced bready birthmark, now decoration, ornament, choice. Nonetheless a maintenance of tradition.

My forearms hurt from kneading the dough with the heart-sinking realization that it was not rising as the Youtube video showed it would. Bread happened before Youtube, too, but “Alex French Guy Cooking” seems to know what he’s talking about. His sourdough starter is wholesome and grainy, with organic rye flours, and tap water sans lead. He stores it in a glass jar with a metal clasp. There are no congealed Thai leftovers in his carefree kitchen. “Alex French Guy Cooking” rolls up the sleeves of his black-and-white-striped boat-neck tee and gets to work kneading by hand. His palms work the dough into a pliable, stretchy mess, and his starter gleefully does what it’s meant to—it raises the loaves with big, tart bubbles that come from nothing but time and proper care.

My bread, frankly, sucks. I wouldn’t call it sourdough. Sour, sure, and dough, definitely, but nothing I’d serve to people. Barely cooked, even.

It simply didn’t rise. January snow, first attempt at sourdough. “Bread is bread, though,” my roommate said, and we chip away at the warm rock, naming things it reminds us of as we chew for research: pretzels, goldfish, hardtack. Wikipedia says hardtack is inexpensive and long-lasting, a good cracker choice if that is your criteria. In the crisp base bits, where the dough touched parchment paper and turned golden-brown—the only part that had any color at all—you can taste the rise. Tart, chewy, crunchy. It tastes right. I made it from nothing, and now it’s savory, and we enjoyed it. We really did. But it’s also so clearly wrong.

It’s heart-sinking, as if the loaf-brick were sitting in my stomach, dragging me—an edible example of how you can do all the right things and get crushed by the outcome. I dream of bread, and on the plate see Play-Doh, eat my words, wish I could conjure up the sweet maple-oat bread with a crackling wood-fired crust from the farmer’s market, spread with raspberry jam and salted butter. Or conversely, a can-risen hot Pillsbury biscuit from the oven on a Saturday morning, drizzled with honey and all mixed up with peppery scrambled eggs.

My supremely sucky sourdough was, as I found among the Instagram hashtags of real bakers, a perfect example of a “fucked loaf.” But it tasted like it was getting there. Not quite bread, but not quite bad. Honey whole wheat loaves are easy, pleasing. A gluten windowpane or a poke test is all you need to know they’ll rise, sweet and light, with the help of added yeast from the supermarket. Whip two up in an afternoon, read a book during the short rise. I dream of honey whole wheat loaves as, twice a day, I discard half the take-out container of beige goop, waiting for it to look like the photos.

The starter is not ready yet, but I’ll coax it there with dry, February hands to match my cold toes and nose. So, sourdough, I’ll start you again. Until then, I’ll see you twice a day to feed you with an Ikea fork, stirring flour into you and waiting. You’ll stay warm in the little cabinet of this dorm that sits adjacent to the rigorous, temperamental heating system that makes us so hot and miserable in here. You’ll bubble, and double, and test the limits of the plastic lid with poked holes that once let steam out of soup. Your name, scribbled in Sharpie, already fades on the lid.

Pia Mileaf-Patel B’20 is naming her next sourdough Sherman Alexie.