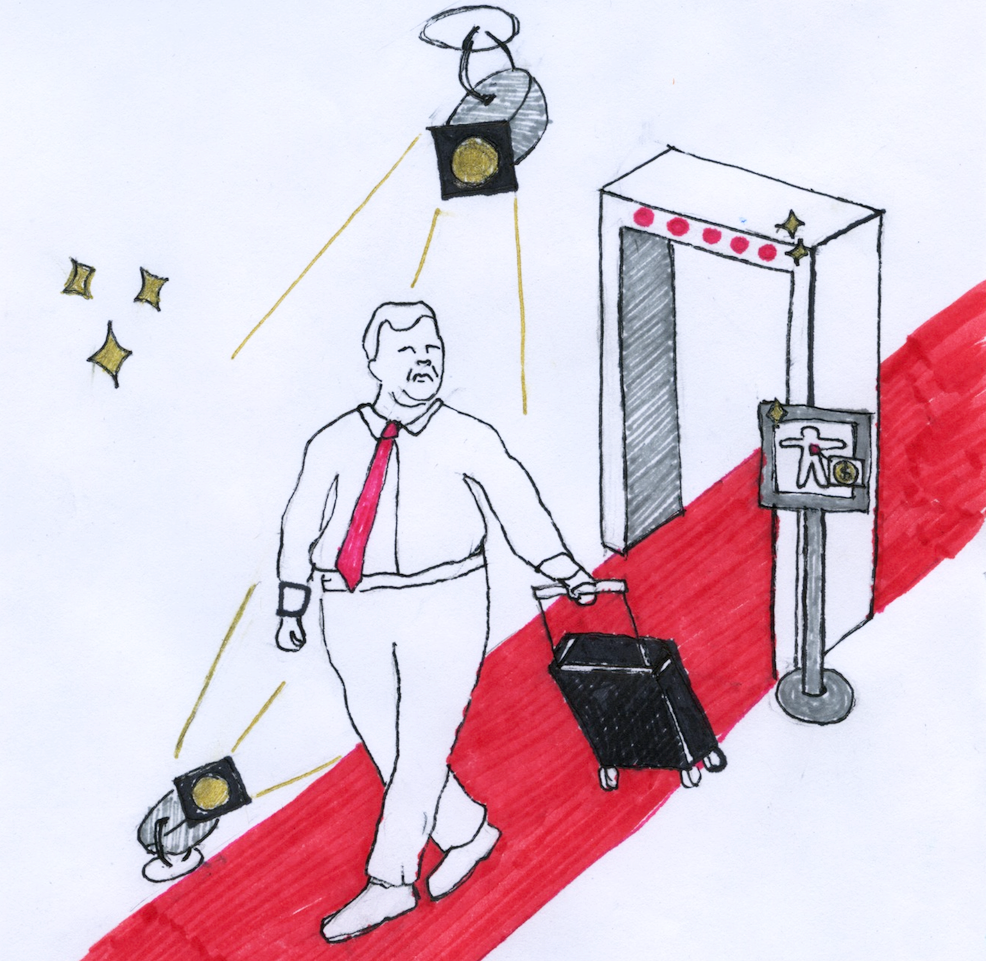 Four years after #Bridgegate flooded Twitter, Chris Christie’s name is once again under fire over a gate scandal. Then, it was accusations of orchestrating traffic jams on the George Washington Bridge. Only days after the former New Jersey governor left office in January, CBS reported the fresh #GateGate scandal, exposing Christie’s attempt to bypass airport security.

Christie was stopped in Newark Liberty International Airport after heading straight for his old VIP access point. An airport police officer and a TSA officer gently led Christie to the proper security check line. Christie complied and waited his turn with all the normal people. When news of his embarrassing day at the airport broke, Christie turned to social media to assure the public that reports of the ordeal were “pure fiction.” According to Christie’s tweets, the ex-governor was actually led astray by a Port Authority officer. A Port Authority spokesperson disagreed.

What was Christie thinking while he strolled towards the restricted section of Terminal C? The Indy has a few theories.

Theory 1: Something along the lines of: “Muahahaha.”  Maybe Christie is a rebel at heart, here to break rules and disrupt the status quo (as well as people’s morning commutes through Fort Lee) on purpose. This theory would explain Christie’s nonchalant behavior when he scoffed at his 15% approval ratings (the lowest of any New Jersey governor ever) six months before his term ended. Christie claimed, “I don’t care … when you’re not running for something, [poll numbers] don’t matter a bit.” Flawed logic for any politician who enjoys pleasing their constituents, but okay.

Theory 2: Moving on is hard. Perhaps Christie wanted to feel special for one more plane ride. Garden State laws allow governors to keep one taxpayer-funded state trooper by their side for six months after leaving office, but maybe the extra company isn’t enough to help Christie transition out of power. Can we really blame Christie for holding onto his routines just a little longer?

Theory 3: It’s the classic “Let’s give them something else to whisper about” tactic. For all we know, Christie could be really torn up about his legacy. Are people still muttering about forced lane closures on the George Washington bridge? What about his tanning session on a beach closed to the public during the state government shutdown? Or the general feeling of ditching his day job to pursue bigger and better things? Maybe Christie’s airport stunt was an attempt to replace more severe misdemeanors in the memories of his constituents.

Theory 4: The man genuinely forgot he wasn’t governor anymore. Kind of a stretch, considering he frequently forgot he was governor while running to be the nation’s president, but still a possibility.

We may never know the ins and outs of what transpired that morning in Terminal C. While New Jersey resident Bob Roseman concluded “who cares,” at least the incident brought a smile to the face of Joe Paulson of Washington State.

Philadelphia didn’t get the skincare memo.

The cold, dry winter all but forced northeastern coastal elites to drench themselves in thick coats of glossy liquids (moisturizers, serums, essential oils). Their western counterparts followed suit, applying various clays to their faces in hopes of exfoliation. The City of Brotherly love—maybe a few years behind the self-care curve, or perhaps as innovative as its revolutionary founders would have hoped—covered itself in Crisco.

The Philadelphia Police Department descended on Broad Street early on Sunday, January 21, tubs of shortening in tow. They rubbed the substance (usually used as a butter substitute) onto the city’s light posts, garnering massive media coverage for their efforts (the New York Times even did a puff piece). Despite the Indy’s hunch that the city’s greasing efforts were meant to combat incessant winter dryness, the Crisco Cops continually claimed that their slathering of vertical infrastructure was a safety measure. The Eagles were scheduled to play in the NFC Championship later that day, and the Police Department hoped a coat of Crisco would keep notoriously rowdy fans—famous for pelting a Vikings fan dressed as Santa Claus with snowballs during a particularly brutal winter game in 1968—from triumphantly climbing the poles in the event of a win.

Win they did, and climb they did. For the boldest of the celebrating masses, the poles the police department had greased with Crisco that morning were not an ominous reminder that post-game disorderly conduct is grounds for arrest. Rather, they became a kind of challenge, similar to the Philadelphia Italian Market’s greased-pole-climbing competition hosted at their annual cultural festival—a sort of “feat of strength.” That pole—unlike those prepared by the police department as a post-game anti-climbing measure—is topped with gift cards and Italian meats (usually a veal cutlet).

For the contingent of Philadelphians who, for whatever reason, knew their way around a greased pole, Sunday’s slippery obstacles were surmountable. Harnessing upper-body strength and perching themselves up high, they could see the joyous mayhem of an Eagles victory on the streets below. Thousands of fans donned plastic dog masks as a nod to the Eagles’ underdog status (and an eerie sight for those out of the loop), rode dune buggies up the famous Rocky Steps outside of the Philadelphia Museum of Art, and ran aimlessly with traffic cones on their heads. The grease didn’t work.

If the Indy has any advice for the Philadelphia Police Department’s future endeavors—other than perhaps, massive reformation—it’s to apply lightly to the dry areas. Avoid slathering.

It’s a beautiful morning in Colorado, the filming location of yet another season of Top Chef. The chefs have just finished a quickfire challenge, where each chef was asked to prepare breakfast for a former Top Chef champion, using a few ingredients including a jar of nutella. Bruce, a contestant who is undoubtedly a crowd favorite, is still energetic from news he received the night before: his surrogate mother successfully bore his first child. Such is the way of Top Chef: 20 percent perspiration, 80 percent quality emotional content. But shh, Padma, one of the show’s four main judges, is about to explain the elimination challenge…

Top Chef is powerful. This incredibly popular show has already convinced much of the American population that cooking, previously thought of as a mundane activity, is a scintillating competitive sport. Perhaps because of this episode’s athletic guest stars, viewers will be pushed towards patriotic zeal, leading them to tune in to the Winter Olympics. In past years, not only have the Winter Games been less popular than their Summer counterparts, but the Olympics as an institution have come under fire for exacerbating poverty in host cities and being a venue for powerful countries to exert their dominance.

In its mission statement, the International Olympic Committee (IOC) resolves to contribute to building a more peaceful and better world by educating youth through sport. Though the Indy hopes you don’t actually believe this neoliberal propaganda, there is always the option of watching the Olympics for political theatrics. For example, this is the first time in eleven years that North and South Korea will form a unified Olympic team. Other political side plots include the IOC’s suspension of the Russian Winter Olympic team due to the country’s system of state-supported performance-enhancing drug use. Russian athletes who passed the IOC’s regulations will be allowed to compete under a generic Olympic flag.
Even if this Top Chef episode does not make you want to watch the Olympics, it will make you aware that something is happening this February. Consider, for example, watching Skeleton racing, the sport of the third guest judge, John Daly. It’s where a person throws themselves onto a sled, letting gravity guide them down a frozen track. Still not into it? It’s basically a grown man speeding down a water slide of ice, reaching speeds of 80mph, head first, tush clenched!