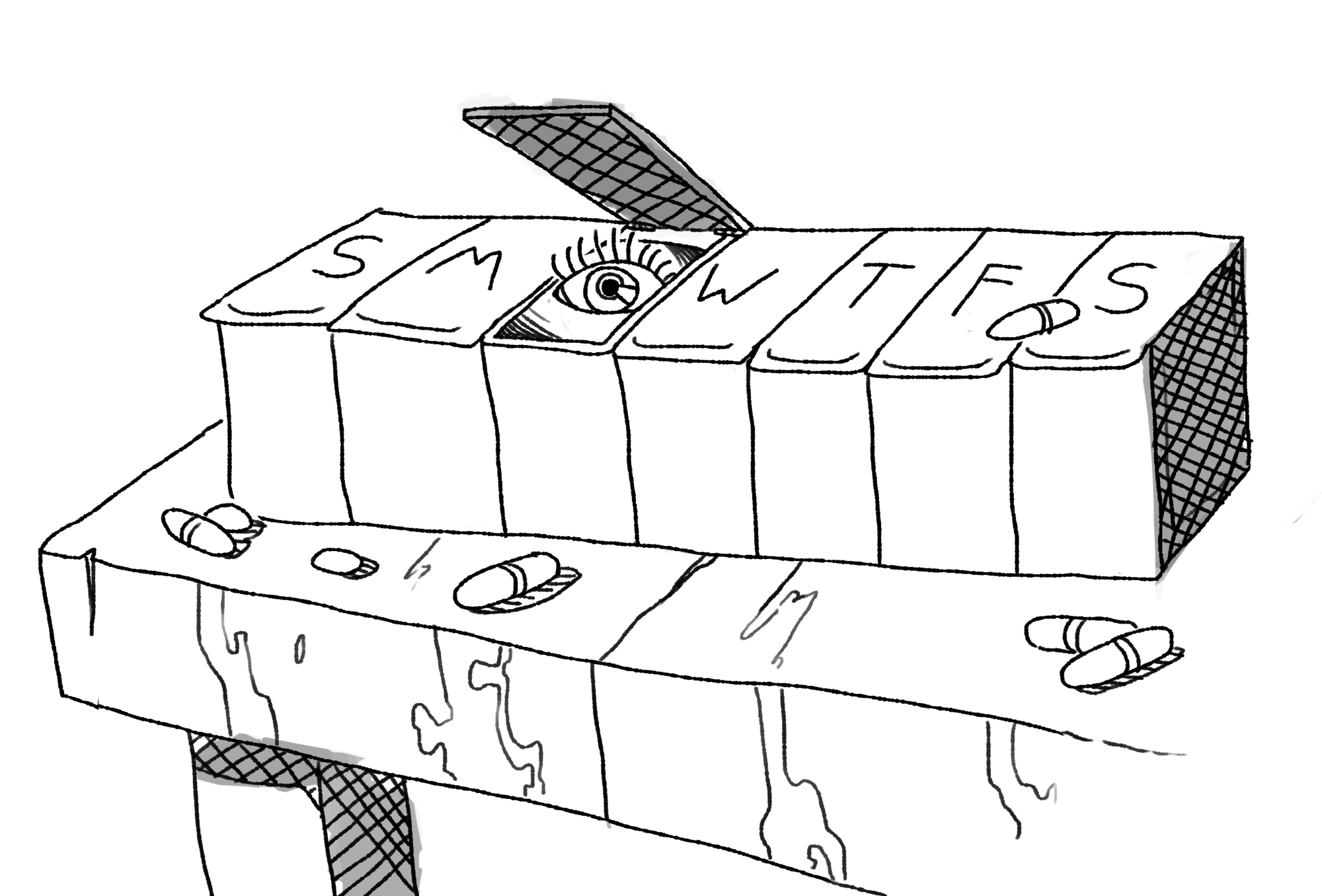 On November 13, the FDA approved Abilify MyCite, a new version of the antipsychotic drug Abilify engineered to include a sensor that can track whether patients have ingested their medication. When the pill hits the patient’s stomach, a signal is sent to an adhesive patch they wear on the left side of their abdomen. The patch then transmits that information wirelessly to an app on the patient’s smartphone. If the patient chooses, the data can also be sent to their doctor and family members.

Otsuka Pharmaceutical, the patent-owner of Abilify MyCite, and Proteus, developer of its sensing and patch technology, claim the tracking capability of the drug takes a step toward remedying a major public health concern: nonadherence to medication in schizophrenia. Current research shows that 50 percent of schizophrenic patients taking antipsychotics don’t adhere to their treatment. This often leads to higher rates of relapse and hospitalization. Further, nonadherence and homelessness are reciprocally linked, amplifying each other as unstable living situations make following medication regimens more difficult. One study estimates that consistent medication use in this population, which amounts to one percent of the US, could save over $100 million annually in Medicaid costs for acute inpatient treatment alone.

Yet, the drug’s promises are muddied by a variety of concerns. Perhaps most glaring is that there is currently no science to suggest that using Abilify MyCite increases adherence. Further, the drug’s new FDA approval opens several questions about the benefits and ethics of digital tracking in mental health treatment.

Implementing tracking methods for medication adherence is nothing new. Medication event monitoring systems (MEMS) are electronic pill bottle caps that track the date and time that patients take their medication. MEMS have been tested on a variety of patient populations with rigid medication regimens, including patients with schizophrenia, tuberculosis, and pediatric patients post–kidney transplant. One issue with this method is obvious: it’s impossible to know with this method alone whether a patient is actually taking any pills from the bottle and, if so, how many.

In an attempt to better capture a person’s true mental and physical states, many researchers— including those developing Abilify MyCite—are turning to biosensors, which directly interact with the body.

Wearable technology for medical monitoring is also being produced in discrete forms suitable for daily use. Some 2016 FDA approvals include: Triggerfish, a contact lens that can help track the progression of glaucoma; MoMe Kardia, a cardiac arrhythmia detector that’s worn as a belt attachment; and FreeStyle Libre Pro, a diabetes monitoring system that allows users to forego finger pricks and instead wear a small sensor on their arms.

Above all, proponents of biosensors praise their efficiency and their capacity for capturing precise health data in real time. Many supporters also note the potential for this technology to aid early interventions when a patient’s health worsens precipitously. But these benefits become more dubious when the technology is applied to mental illness, since much of the research necessary to recommend technological interventions has yet to be done.

“We think we know a lot more than we actually know with mental illness,” Michael Armey told the Indy.

Armey is a researcher at Butler Hospital in Providence with a faculty appointment in the Department of Psychiatry and Human Behavior at Brown University’s medical school. In a recent project, Armey examined the role of digital interventions in better understanding patients’ fluctuating schizophrenia symptoms.

People are generally poor at remembering the details of their lives clearly even a few days in the past. In a population with psychotic symptoms that sometimes include delusions, this memory log can get even blurrier. In this way, gathering reliable information about a schizophrenic person’s pill intake—as well as information about their mood and rest, which the Abilify MyCite smartphone app supports—could provide crucial insight into what specific barriers to adherence they face.

“One of the challenges of psychotherapy is that you go to an appointment maybe once a week, but most of the problems you’re experiencing aren’t happening on that day,” Armey said, “The technology can help close that gap.”

Yet, Armey cautioned, a lot of similar technology hasn’t been researched enough to be considered effective. The majority of self-proclaimed health apps available don’t have much predictive power beyond user testimonials. Furthermore, developing digital interventions for patients experiencing psychosis is a much more difficult process than doing the same for patients with mood disorders.

In addition to questions about scientific reliability, the advent of Abilify MyCite—and other digital interventions used to treat mental illness—gives rise to several ethical concerns.

Key to the Abilify MyCite system is the corresponding MyCite app that allows patients to track their data, as well as share it with healthcare providers or caregivers of their choosing. The goal according to the drug’s creators is “to provide additional clarity to better inform physicians and their patients.” If this system helps foster better communication between patients and their providers and caregivers, it could lead to more effective treatment plans.

But many people have expressed worries about privacy infringements enabled by sending health data to smartphones. After all, the portability of smartphones makes them relatively easy to steal, and even secure platforms can be hacked with the right finesse.

Hoping to quell these worries, Otsuka collaborated with bioethicists in designing their app to ensure the product was secure and built around user consent. “From the Otsuka standpoint, we believe the data is owned by the patients and we are custodians,” Andrew Wright, VP of digital medicine at Otsuka, told MobiHealthNews. The patient is given choices at every step, according to Otsuka: they opt into taking the drug, choose who they share their treatment data with, and decide whether to add in additional information such as mood, rest, and movement information.

Whether and how much choice the patient will truly have is unclear, however. Questions naturally arise about the extent to which patients with psychosis can consistently give informed consent, which is crucial for this system to gain the trust of patients and providers—lest its surveillance capability resemble a “Biomedical Big Brother,” as the New York Times called it.

“Abilify MyCite is a confusing product,” Armey told the Indy. “This doesn’t strike me as population where the medication is a good fit.” Armey noted that the choice seemed peculiar considering that people with schizophrenia are often paranoid about being watched or tracked. Dr. Paul Appelbaum, director of law, ethics and psychiatry at Columbia University’s psychiatry department, echoed this point even more emphatically to the Times: “You would think that, whether in psychiatry or general medicine, drugs for almost any other condition would be a better place to start than a drug for schizophrenia.”

These questions about the appropriateness of choosing schizophrenic patients as the new drug’s target population have also prompted concerns about a potential conflict of interest for Otsuka, who recently lost their patent protection for the non-trackable form of Abilify. Twice in 2015, Otsuka sued the FDA for the loss of its Abilify patent, claiming it had the rights to the drug until 2021 due to its “orphan drug” protection for use on pediatric Tourette syndrome. Since Abilify’s other approved uses don’t get the same status, a judge ruled against Otsuka.

Further, some have noted that the availability of tracking pharmaceuticals like Abilify MyCite could enable insurance companies to incentivize patients with subsidized copayments to take the trackable version of their medication.

“If the incentive comes with bonuses for compliance, that can start to border on coercive activity,” Poland told the Indy.

Antipsychotic treatment without coincident digital interventions themselves remain controversial in the medical world; although they’re typically considered beneficial for acute treatment of psychotic episodes, the drugs’ unpleasant side effects frequently drive patients away, and the sustainability of long-term use is hotly debated. Abilify MyCite introduces a slew of new controversy to the mental health field regarding the ethics and appropriateness of using digital tracking on mentally ill patients. Biosensing and mHealth have the potential to revolutionize treatment and mollify major public health concerns, but there’s still a lot of science that needs to be done to suggest digital intervention as the sure way forward.

LIZ CORY B’18 wants to see the research.