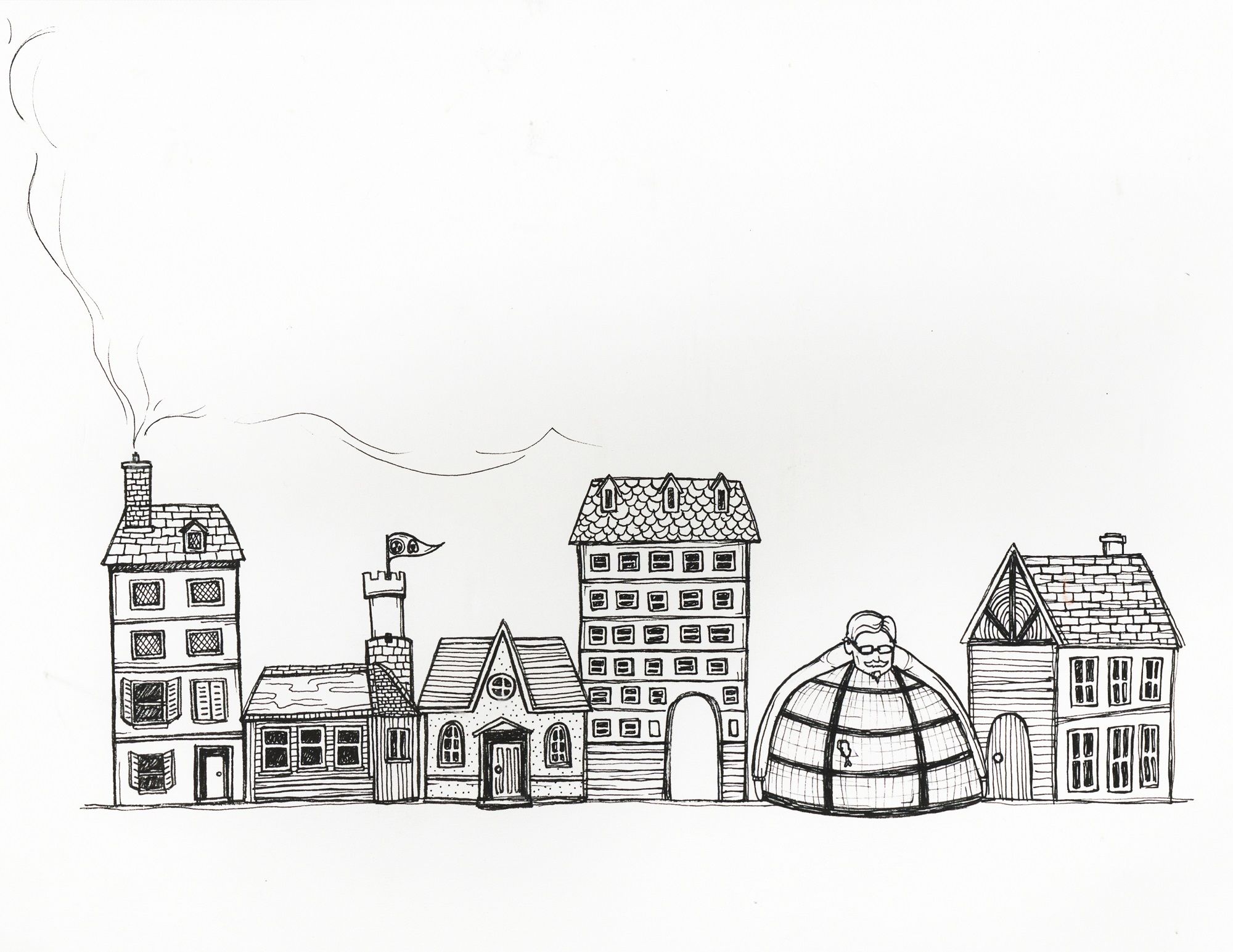 Like a specter haunting Middle America, the remnants of Cold War industry are making for a strange housing market this month in the Great Plains. Six months ago now, Ed and Dianna Penen, current owners of a former nuclear missile silo in Eskridge, Kansas, decided to list their concrete grotto on the short-term lodging site Airbnb. Although the transfer of Castle Subterra, as the missile silo is now called, is pending, business looks to be certain for the new owners. Late to the news, just the past week has seen dozens of articles publicizing the strange accommodation. Visitors can enjoy being below the surface of the earth, a lack of natural light, a very long concrete tube, and what seems to be a normal looking couch. And guests that don’t wish to be entombed also have the option to visit the “ritual stone circle” that sits on the property aboveground. Though what happens at the circle is uncertain, guesses are that it has something to do with the Penens’ online ‘Vision Statement’: “We of Subterra hold a vision of a healthy, healing, community environment, nurturing Body, Mind, and Spirit. Relying on Spirit, we invite eclectic and esoteric learning experiences that create sustainable lifestyle models and project a transformational vision of peace to the world.” Indeed, this is certainly one way to interpret their apparent monument to nuclear disarmament. Perhaps, however, things seem different to the latest casuality of the sharing economy and displaced, former resident of Castle Subterra, Matt Fulkerson, who now hosts the property for its owners. God bless his heart.

Meanwhile, while former nuclear land looks to be a boon for at least some homeowners in Kansas, 550 miles west, radioactive waste continues to cause grief for property owners downwind of Colorado Superfund site Rocky Flats. Administered by Rockwell International since 1975 after opening in 1952 to manufacture plutonium triggers for bombs like those that sat at Eskridge, the facility was finally shuttered in 1989 after an FBI raid determined that the site’s operators were illegally handling the facility’s toxic by-products. Since being convicted of environmental crimes, houses in the path of Rockwell’s airborne cancer-dust have been unable to sell for market value. This month, however, saw the first payout to property owners as the result of a 27-year-long legal battle between approximately 7,500 claimants and the managers of Rocky Flats. Good as it may be, the settlement only handles losses on the value of homes as assessed for the year 1989, a paltry sum for those looking to abandon ship in 2017. In fact, their losses don’t look to be recuperated any time soon: Growing up and down the road from Rocky Flats, livestock birth defects were an open secret, and living too close to the site is still perceived to be a risk. Ironically, much of Rocky Flats is now a Wildlife “Refuge.” Sorry, Squirrel.

If you, dear reader, like us, find yourself searching for inspiration as the winter months set in, you may find yourself googling “inspirational quotes” or “coping with disappointment.” We have certainly found such statements comforting as we close out our time at this dear paper, mollified by the knowledge that our youthful follies will have forged us into something greater.

Certainly, American fast-food institution KFC understands something of this. In advance of Cyber Monday, KFC marketed a one-of-a-kind Internet Escape Pod, a WiFi-proof Faraday cage (an enclosure used to block electromagnetic fields), for $10,000. Encircled by the hug of Colonel Sanders himself and featuring a fried chicken door handle, the Pod is meant to bring families together free of distraction, in the kind of enclosed space that inspires fried-chicken eating. Unfortunately, seeing nary a taker, KFC recently marked their Pod down to $5,000.

(Colonel) Harland Sanders began selling fried chicken on the side of the road in Corbin, Kentucky during the Great Depression. Sanders was granted “Colonel” status in 1950 by a Kentucky Governor and within years refused to leave the house without a white suit and string tie. His associates adopted the title change “jokingly at first and then in earnest,” according to a biographer. By 2015, the company was struggling: their sales surpassed by Chick-fil-A, CEO David Novak soaked in fake blood by a PETA protester. Amid reports that more and more are turning to vegetarianism (a recently published report estimates that 400 million fewer animals were killed for food this last year than 2007), Sanders & Co. certainly face a new world.

Does KFC merely want us to turn back time? To join their almost-definitely racist, good ol’ boy America of string-tied white Southerners? Or—advertising the Pod via Instagram—are they using such symbols to ride viral marketing trends all too happy to pick up on out-of-touch or downright bigoted brands? KFC’s recent history of marketing ploys would certainly seem to indicate the latter: they sold a 400-year-old chunk of meteorite carved into the shape of a Zinger sandwich to commemorate its [the sandwich’s] recent trip to space (It sold for $20,000 to a vegetarian), made chicken-scented candles and bath bombs, and even offered an edible chicken-flavored nail polish. These desperate ploys certainly seem the mark of a dying brand.

Are we, dear reader, asking too much from the ups-and-downs of a corporation chock-full of animal rights and labor violations? Why see our hopes and disappointments at all in the Colonel? Leaving our fancy college, we find our shoes equipped with Velcro rather than bootstraps: we seem poor fits for the Colonel’s American Dream. Besides, dear reader, our fingers have become slippery, having eaten the much superior Popeyes chicken in the meantime.

Here is my inconvenient truth: when I was 18, I received a rush-job stick-and-poke, which has since sprouted so much leg acne that its message (the high school proto-male-feminist-anthem #GirlsBeforeBoys!) has been rendered pretty illegible and really gnarly. I was drunk, and I am sorry. I am, however, reticent to tell my mother, for whom tattoos are a permanent mistake, that she may have been right. When she brings it up, I grit my teeth and bear my pimples with pride, because, after all, this shadow of a tattoo is part of who I am, my identity, as if this puts my zitty outline beyond regret. I acknowledge my misstep, but a part of me is sad the tattoo has faded behind mountainous pustules.

This past week, Karissa Lindstrand, member of a Canadian fishing crew in New Brunswick, expressed a similar sentiment about a lobster she found branded with a Pepsi logo. “I’m really wishing I would have kept it now…it was pretty neat. Kind of bad, but pretty neat,” she said. Cornered in the waters off Grand Manan, the lobster was on the brink of  having its claws banded when Lindstrand spotted it. Like a good caffeine dependent American, Lindstrand crushes 12 cans of Pepsi every day and instantly recognized the silver rim, blue body, and red crest of the Pepsi globe. “I was like: ‘Oh, that’s a Pepsi can,’” Lindstrand told The Guardian.

How the lobster became a crawling advertisement for the carbonated soft drink company is disputed. Original theories included: 1. the lobster grew around the can 2. a Pepsi box somehow got stuck to the lobster. Lindstrand disproved both theories. The tat was pixelated, she declared, suggesting it did not come from a can. Furthermore, the logo on a Pepsi box is much larger than what appeared on the lobster. The Indy’s original hypothesis—that the lobster adopted the American high-schooler’s most popular form of employment and enlisted as a brand ambassador for Pepsi—has also been debunked. What lobster would voluntarily don an image of a company whose cans and plastic six-pack rings have injured and killed thousands of its peers? How could a lobster condone the 5  to 13 million tons of plastic annually seeping into the world’s oceans?

While we got to choose our body mods, others are not as lucky, forced to parade around the vaguely patriotic logo of a bronze plated soda company. At Thanksgiving dinner last week, when my mother asked me what I was grateful for, I hiked up my jeans to reveal the faint, blemish bordered expression of my 18 year-old self. Cherish the ink you choose.