Without Pedestals Everything Falls in the Mud

Queer ecology as an attack on hierarchy 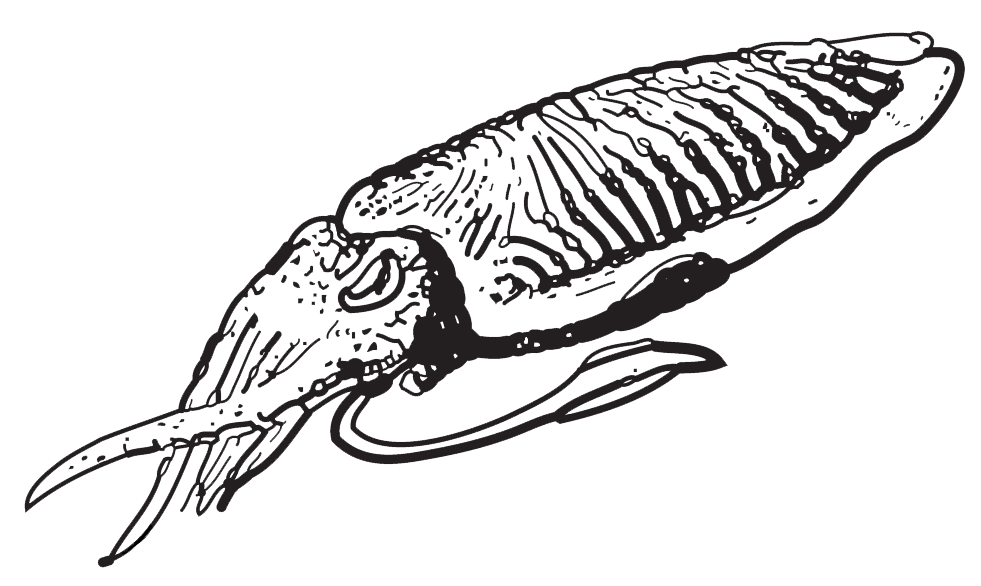 Male cuttlefish have evolved a unique reproductive behavior. During mating season, they win the eye of a female by fighting off competing males, ensuring that the largest, strongest cephalopods pass on their genes. Smaller males which have no chance of winning these fights have adapted a less violent mating ritual, in which they tuck in their tentacles, change their visual pattern, and disguise themselves as females. These males in drag fool the larger males into thinking they are females, thus avoiding the violent fighting. When a large male moves to mate with a female, the smaller male will sneak in, convincing the macho male that he has secured the rights to mate with two females. As the three huddle together, the smaller male will mate with the female, securing another generation of small, clever queers. In some situations, this genderqueer male can even split his coloration bilaterally, appearing male to a female on one side of him, and female to a male opposite him. A fast read of this behavior would make the cuttlefish appear to be a queer role model of some kind, but his lack of consent and deceitful approach to sexual activity in general reflects the immediate impossibility of discussing human sexuality and animal sexual activity as one and the same. The cuttlefish’s behavior does, however, allow us to consider alternative possibilities for how we construct our own identities.

The evolution of a bilateral drag queen is just one example in a swarm of idiosyncrasies that demonstrates the unfathomable diversity present in animal reproductive behavior. At the Institute of Queer Ecology, we work to communicate this diversity, because on every political, social, and biological level, diversity is an indisputable strength. Queer ecology can communicate aspects of biodiversity that have been left out of textbooks. It doesn’t pave the way for the justification of human behaviors because of their “naturalness,”  but rather allows for imagining one’s queerness in the context of a larger natural history, free from marginalization. This process of dreaming interspecific queer utopias is especially helpful for people who find themselves oppressed and marginalized by current hetero-regimes. Another strength of queer ecology is its ability to decenter humanity from its own constructions of the world. In this way, queer ecology counters environmental destruction and advocates for the same biodiversity it draws on for inspiration. Alex Johnson writes about this endless biological complexity in his essay “How to Queer Ecology: One Goose at a Time,” reiterating positions he intends to disagree with: “If straight is the identity of I am, then gay becomes I am not… Instead of talking about nonconformity, I want to talk about possibility and unnameably complex reality. What queer can offer is the identity of I am also.” The Institute of Queer Ecology is a research, exhibition, and publishing platform dedicated broadly to these issues, looking to mitigate the violence and oppression inflicted upon LGBTQ+ communities and the environment. Queer folks and ‘nature’ alike can no longer be othered if we want to achieve this goal.

As we continue our search for queer kin, it’s worth mentioning that dolphins are also notably gay. Not all of them, of course—and it’s more appropriate to refer to many of these animals as bisexual. In an effort to understand queerness in a Darwinian view of the world, some researchers believe that young male dolphins relate adolescent queer sexual activity to early forms of social bonding. If the dolphins benefit from the activity, it therefore becomes a survival mechanism in some sense of the word. In scientific circles there is a sharp distinction in how animal sexuality and human sexuality are talked about and labeled. The use of terms like ‘gay’ to describe animals like dolphins is discouraged, as it personifies them in a way that is undesirable in mainstream ecological discourse. In an article for the New York Times, Jon Mooallem writes of an encounter he had with an albatross researcher who vehemently operated within this jargon while studying a nest with two females. The scientist, Lindsay C. Young, referred to the word “lesbian” as a human term, and was “devoted to using the most aseptic language possible and resisting any tinge of anthropomorphism.”

Emerging from a history of suppressed research, Bruce Bagemihl presented his book Biological Exuberance: Animal Homosexuality and Natural Diversity in 1999, which presented over 450 examples of previously overlooked research into homosexuality across species. Near the end of this book, he questions the effectiveness of the research: what are the implications of this work in a society that has such a messy relationship to ascribing morality to acts viewed either as ‘natural’ or ‘unnatural’? Bagemihl writes, “More information about same-sex activity in animals simply means more possible interpretations: the information can be used to support or refute a variety of positions on the naturalness or acceptability of homosexuality, depending (as before) on the particular outlook of whoever is drawing the conclusions.” Bagemihl’s book, however, did go on to change discussions, and is sourced as a precedent in almost every text on queer ecology. While the application of this research becomes troubled with multiple interpretations, one positive example emerged when the American Psychiatric Association cited Biological Exuberance in their brief to the United States Supreme Court in Lawrence v. Texas. This case led to the removal of sodomy laws across 14 states, illustrating that this argument that Bagemihl feared may be futile is able to sit in an ecology of other framings as justified.

At the Institute of Queer Ecology, we believe that while calling animals gay may bring us closer to them, it oversimplifies the situation. As much as we’d like to acknowledge ourselves and dolphins to be the same kind of queer, that’s not the case. The mapping of queerness onto nonhuman organisms can be an irresponsible act, as projecting these identities onto animals makes their actions appear synonymous with ours. But the terminology used currently to describe their behaviors—mainly the word ‘homosexual’—feels so rooted in a history of discrimination and essentialization, such that it does not entirely fit either. In her discussion of the queerness and sexiness of mulberries, Catriona Sandilands states, “I don’t mean to suggest that their complicated sex/gender/species lives should naturalize the living of other complicated sexualities and genders, as if their particular species-being could justify queer lives in other species, as if to take the parameters of one kind of life to normalize the socially and politically enmeshed becomings of others.” This positionality is where we sit at IQECO; we are aware of the complexities of this field, but willing to push on towards imagining with queer ecological thinking regardless.

The study of non-normative animal sexualities is almost never discussed on its own. This research is muddied with human concerns and is used in various ways to inform human understandings of sexual orientation. For much of natural history, documentation of homosexuality in animals has been unexamined or suppressed. But in the last half century, coinciding with the timeline of the queer liberation movement (and the environmental movement) there has been an upswelling of previously fringe research into mainstream debates. Historically, field biologists would omit observations of nonhuman same-sex encounters, because those who did publish this work were accused of forwarding a gay agenda and their own sexual orientations would be questioned. Of course, no research on animal behavior would be dismissed if it confirmed ‘desired’ traits like heterosexuality, family bonds or mating for life as ‘natural.’ The politicization and suppression of same-sex research, and the unchallenged acceptance of research representing ‘straight’ animal behaviors, is one method by which traditional animal studies research replicates categories of ignorance and oppression under the banner of objective science.

As a word, “queer” flamboyantly inhabits a gray area in language. Originally meaning strange or odd, it is now both an umbrella term for diverse gender identities and sexual orientations, and a tool to theorize the position of people marginalized by their sexual and gender identities within historically determined power structures. While it may seem, well, queer, that the word is both one that refers to human sexuality and becomes a term for destabilizing a number of commonly held beliefs, we intend to use both definitions at the Institute of Queer Ecology. We aim to unsettle heteronormative discourses with this research, while providing an alternative history for LGBTQ+ youth to access. For those who grew up in queerphobic environments, who felt isolated and alone in their identities, an expanded notion of queer community including every other species might prove to be invaluable. However, early childhood access to these multispecies queer manifestations is hard to come by. The American Library Association reports that And Tango Makes Three, a children’s book based on a real life gay penguin couple and their adopted daughter, has been constantly on their list of the books most actively vilified by parents since it came out in 2006. While the book has been banned in school libraries across the country, its co-author Justin Richardson has said, “We wrote the book to help parents teach children about same-sex parent families. It’s no more an argument in favor of human gay relationships than it is a call for children to swallow their fish whole or sleep on rocks.”

Traversing this field is no easy task. The terrain is rocky with agendas and muddy with misinterpretation. The animals that I’ve described as queer do not totally embody the identity that has been mapped onto them. They haven’t been ridiculed by their peers for that identity, nor have they become emboldened by a queer community in opposition to that oppression. They have, however, become catalysts for the movement to queer ecology. The best way to undermine heteronormative systems of oppression may be a more successful education on biological diversity and its potentiality as a tool for utopian dreaming.