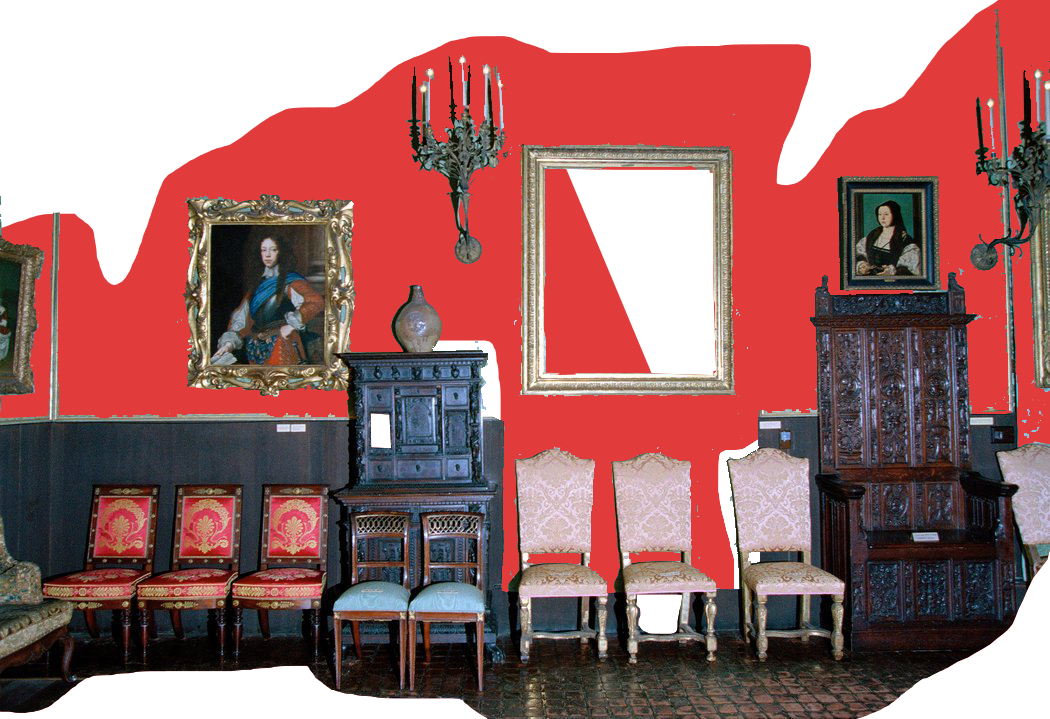 Underneath the premiere painting of the Isabella Stewart Gardner collection, Titian’s Europa, hangs the skirt of Isabella Gardner’s own ball gown. In the context of the sexualized painting, Gardner’s gesture is scandalous for a married woman in 1903. While Gardner was alive, most did not recognize that it was her skirt, but now that its provenance has been revealed, it is used as an example of the eccentric puzzles hidden throughout the Isabella Stewart Gardner museum.

Beyond the 30 centuries of history that provided for the subject matter of its collections, the Isabella Stewart Gardner museum is one marked by its own storied legacy. An unsolved 1990 theft of 13 works, including paintings by Vermeer and Rembrandt, blankets the collection in the thrill of tragedy turned mystery, glittered by a $10 million dollar award for information connected to the recovery. And the collection has been permanently united with a woman, the namesake of the building and collection, Isabella Stewart Gardner herself—long dead, yet still lingering in the ineffability of the collection she left behind.

Born into New York City wealth in 1840, Gardner became a Boston socialite who liked, among other things, luxury objects and travelling. While voyaging through Europe with her husband, Gardner found herself with a Vermeer after outbidding the Louvre and the National Gallery in London in an auction for the piece. From there, Gardner became a ‘big man’ among her male collecting peers (though she sat at the back of auction halls, face covered, while a man bid on her behalf). She travelled throughout Europe in luxury, collecting paintings, statues, tapestries, ceramics, furniture, and architectural pieces. In 1898, she built a museum based on the architectural model of Italian Renaissance palaces, with a courtyard sporting a glass ceiling, in Boston. Gardner hired others, but made sure to insert her own autonomy and personality, even climbing up the scaffolding if she needed to, and then spent a year arranging her collection within the space. In her will, Gardner makes the final act of individuality, the cherry on the top of a regime of personal agency: if anything is moved from the place where she left it, the collection will be dissolved, sold, and the money donated to Harvard University.

Patrons wandered through two floors of galleries congested with the “treasures” of Europe, Asia, and Egypt. Art historian Anne Higgonet explains that the idea of democracy associated with the museum’s status as open to the public (who, nevertheless, had to pay a fee), “justified America’s acquisition of the world’s cultural heritage; indeed, it transformed a right into an obligation” in the early 20th century. The appropriation of artifacts, long driven by both European and American colonialism, was presented as laudable public education.

Such a collection of valuable global art and artifacts was new to America in 1903, the year that the museum opened its doors, and especially inaccessible to anyone other than the rich. Gardner treated collecting like the men around her—fighting over the same old masters, and, in the terms of biographer Kathleen McCarthy, “publicly celebrating the acquisitive prowess of American capitalism.” For Gardner and the others accumulating pieces and stripping them of their religious and cultural context, this kind of collecting operated as their troubling attempt towards philanthropy. Gardner ensured that her collection would be left “for the education and enjoyment of the public forever.” But the Isabella Stewart Gardner was never just a catalog of learning or instruction, but instead a place to experience. A review of the collection from 1927 celebrates the museum’s supposed emphasis on enjoyment over the reception of culture, repeatedly calling the collection “enchanting”—“every room has an inviting aspect and makes one feel it would be a pleasure to linger indefinitely.” The website promises that “a veritable feast for the senses is in store.” But with the collection’s lack of provided context for its pieces (and with nothing to place them in a legacy of colonialism, art history, and the confluence of the two), part of the museum’s provocation might be what, exactly, visitors might be able to sense in its collections.

Today, the Isabella Stewart Gardner stands as one of many Boston art museums. Five minutes away, the Museum of Fine Arts houses similar art but falls closer in line with the white wall, institutional art showing tradition. Carefully delegated wings and floors separate “19th to Early 20th Century American” from “Chinese Song Dynasty.” On the other side of Boston, the Institute of Contemporary Art stands in all of its glass and stone, walls and doorways negated in pursuit of austere showspace. In these public institutions that are free of individual names, era, origin, artist, and theme are used to organize materials for the sake of clarity, and curators make decisions about the placement of works within categorical limitations.

Higgonet explains that “on the whole, private collections express individual impulses, while public museums express cultural values.” But the Isabella Stewart Gardner lies not-so-neatly in between the two. Gardner certainly expressed individual impulse. But the collection was always meant to be viewed by the public, and Gardner’s guiding philosophy was searching for both what she liked and what she believed America wanted to see. To say that a public museum expresses cultural values seems reductive: how does the museum define the public’s cultural values? In public museums too, like the MFA down the road, decisions still fall on individuals, just far more of them. In Gardner’s philanthropic mentality, her museum was never explicitly created for her own enjoyment, but instead to have a place, purpose, and collection that had her name attached.

All the floors surround the central courtyard, a collage of broken up marble female goddesses, a variety of pots, and different kinds of ferns. Since it opened, this courtyard has been the museum’s primary public association, not necessarily exemplifying the collection as a whole (each space has a character of its own), but taking the role of first Google image and the most popular subject of visitors’ Instagram stories. “Gardner wished to create dialogues across period and place,” is the basic monologue, “so she designed the pieces in ways that draw out connections and new revelations.” Therefore, she divided the 5,000 objects into loosely organized rooms that round the courtyard in no specific order.

The Isabella Stewart Gardner feels—and, through its careful preservation, is—petrified in time. While it is natural for institutions to evolve over one hundred years, Gardner’s will means that the museum will keep its turn of the century daze until its dissolution. The museum’s age, in combination with the domestic qualities of the space, create an atmosphere that feels more formal and guarded than contemporary or recently renovated spaces. Traditional furniture and wall paper make the space more stuffy than a gallery clean and sterile. But the rooms are spacious and brightly it from the courtyard. Objects are placed out in the open like they would be in any home.

The “whole” in an any art collection is not clearly discernable, let alone definitively possible. But in Gardner’s case, there is at least one unifying quality: herself. Anyone who enters will encounter Gardner. Such an individual focus may seem exclusive, if not dull. But the intentions behind Gardner’s will point away from her representation as an individual and towards the continuation of her design principles. While the museum was always intended to remain standing after her death, the emphasis on keeping everything it its original place assigns the value of her collection to the arrangement of the art and objects, and not to the coherence or totality of the collection.

In a New York Times review, Utrecht Boser explains the anger of some curators and art historians who find the intent of the Gardner museum to “solicit not an intellectual but an emotional, highly personal response” impure. The lack of organization and identification plates upsets an academic vision of the representation of pieces indispensable to a traditional art history. Down the road at the MFA, visitors can walk from gallery to gallery to view a continuous line of clearly labeled images and objects. The only quality of such a museum that is not intimidating is the predictability—there are few surprises here. For the pure viewing of a painting, direct minimalism may be optimal. But the appeal of a collection exists in the dialogue between the parts, and not just the single and the whole. In contrast, the Gardner includes emotionally driven compositions. Gardner combined meaning-making with her own whims to create a system of affect rather than order in her design. Her method creates an untraditional viewing experience, but may provide needed respite for many from the stoic academia of the public museum.

Gardner left her museum beautiful and grand but, at some points, unsettling and strange. The kitsch exposes itself in the corners, in the distance between the chair and the desk, or in the strange combination of vase and bowl. The arrangement of furniture is not perfect or seamless in any way, and in many intersections, it is just plain awkward. Embedded in the idiosyncracy, the art is less serious and more approachable, and invites the visitor to draw their own affective conclusions.

To most visitors, Isabella Stewart Gardner is present but unobstructing. Collections, by nature, present multiplicities, variation, and choice. There are different points of entrance, internal relationships, and connections to be made. All of these qualities make any museum collection intriguing for the individual eye and mind, and this is no different in the Gardner museum, despite the scattering of her personality.

In one of their most practical critiques of the museum, art experts have chastised the museum for its upkeep of the collection, citing sun damage due to overexposure. While the preservation of art is a serious concern, the idea that the museum places its art at the level of its visitors (and thus, at its most vulnerable position) might be reflective of the best of the house-museum: Gardner’s devotion, above all else, to the experience of those who she invites inside.

ISABELLE REA B’20 gets in free with her name.