On the fantasies of Wolf Hall 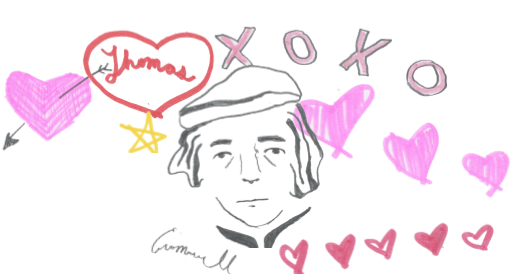 I’d seen the book around the house, collapsed on different surfaces. I had heard remnants of kingly names and dark adjectives spoken from the blue screen where my father was editing photos in his bedroom office. My mother would complain to her sister about the less adept members of her book club who thought Wolf Hall, Hilary Mantel’s 2009 novel following the rise of Henry VIII’s right hand man, Thomas Cromwell (easily confused with later revolutionary Oliver), was too historical and too dense.

When I was 15, I liked history because of the easy gratification. Facts were like shiny artifacts that I could quickly accumulate as a way to escape the suburban rut I felt stuck in. I binged on costume dramas and got 100s on multiple choice history quizzes. I thought: my peers embrace whatever this impure contemporary ninth grade culture has come to be, why not find something more pure? And the Early Modern elite world might be a nice setting for an escapist day dream.

It was for these reasons I picked up Wolf Hall. The first page took three tries (my mother’s book club was not wrong). When I finally succumbed to using the audiobook and put in my headphones, the voice of a calm posh man entered my head. He seemed to already be in the middle of the storyline, but I had no intention to interrupt him or tell him to leave. I liked his voice—his gruff tone. It was that of an English actor who played charming, yet subtly flawed, middle-aged men.

It became automatic, after sliding into my sheets, to pick up the heavy volume and press play on my Audible app. Sometimes I would wake up to the gruff voice still rolling through a halfway inserted earbud. There were weeks where  I would have no energy to read for nights on end, but would start listening anyway, and fall asleep while trying to determine where I had dropped off the night before. I would end up hearing the same passages in a half-awake state for days. There were patterns of actions and words, considerations and intonations that I knew so well. During the day the fractions of story continued to play out. Cromwell’s words were harsh and confident, but revealed their humor and humanity in repetition.

I met Thomas Cromwell (the Cromwell I know) as a young lawyer for Cardinal Wolsey. Cromwell loved and admired this man more openly the more Wolsey fell from power. The King’s men took Wolsey as Cromwell struggled, not with his fists, but with his hands and mouth, writing and meeting and attempting to convince his countrymen. Cromwell was too late to help him, and Wolsey died in a cold and empty house that was not his own. After that, Cromwell had everything he needed to achieve his own power: an influential position earned from his former employer, the foundation of a Machiavellian technique, and a deep anger at the entire English court.

Cromwell’s home was warm wooden passageways that opened onto small rooms defined by their books and brown and red upholstery. There were dreams of Renaissance humanism threaded with edgy Protestant thought, and thinkers slinking in through the back door. His wife with a candle at the table, two girls tucked in bed upstairs.

Cromwell followed Wolsey around and eventually people at court got used to him. He was a wriggler, a manipulator, a schemer, but really everyone just thought he was a really nice and interesting man! That was the trick he made look so simple. He was kind and he listened; he knew things and used those things to give advice. Even his enemies wanted to stop and chat. And these were all interactions which he could eventually spin to suit him best. He knew how to trigger vulnerability and butter it over. He could choose what to do next: indulge in confidences, put words in their mouths, blame someone else for the damage he had done. This plays out in a scene Mantel narrated so carefully: “He sits quietly, watching Henry, trying by stillness to defuse the situation; to wrap the king in a blanketing silence, so that he, Henry, can listen to himself.” He worked his way, up-and-up, straight into the palm of Henry VIII. Then he stepped out, picked up the king with his own thumb and finger and placed him in his own hand. By the end of his political career, Henry VIII was at Cromwell’s beck-and-call.

But surrounded by all of this was again, his home: the wooden passageways and red and candles. Home, although his wife and daughters were gone, dead of a fever plaguing London. So as much as Cromwell played with other people’s vulnerabilities, I, his confidant, knew that he had his own. This side of Cromwell made me cry: his memory of seeing the ghost of his wife on the stairs the morning of her death, the nagging regret that he did not do enough to save his beloved Wolsey. Inside his mind I could detect his tenderness, and was it... almost feminine? No, not at all. This was a man, a Renaissance man even! His craftiness, his progressive dealings, his inner connection with the poor he was born into. I had fallen for and inside of the mind of one of the greats, I believed. I had tied myself to characters before, but Cromwell was real. I could point to decisions he made, read his speeches to Parliament and personal letters (although I never did), and far more than a few people knew the name when I muttered it aloud.

In a desk-chair in my first year of college, I watched my aloof English history professor, a Cambridge man then teaching in America, sporting a half-buttoned button down, with stubble and an accent like my father. Each time he reached a new man in his narrative of the years between 1524–1660, he walked to his computer to change the Powerpoint slide to the next portrait. On the day we got to Cromwell I sat in anticipation of the satisfaction at having my internal Thomas validated by the academic’s screen. Instead, from the Hans Holbein painting on the slide and the notes I had scraped as fast as possible as my professor glided on, I watched the birth of a completely new man. Cromwell was the ambitious councillor, but ‘ambitious’ in the lying, scheming, ruthless sense. He made enemies with his horridness, but he was smart—incredibly intelligent!—so he figured out how to control Henry. He found ways to take those who knew what he was doing to the tower, and in this way Thomas More, Anne Boleyn, and other superplayers faced their deaths. The news I least expected to hear was near the end. When my professor hinted at a fall from power and perhaps a subsequent end by hanging, I covered my ears. The book hadn’t gotten this far.

For 10 pages I was encouraged to explore the question “Was Henry VIII a Tyrant?” while paying special consideration to Cromwell’s role. The history books reiterated my professor: Cromwell filled the 16th century political role of textbook villain—the oppressor who operates behind the scenes. Rebellions in the North had targeted Cromwell, not Henry, in their complaints about royal oppression. It was Cromwell’s hand that shooed out the monks from their monasteries, so that the monks went homeless and the buildings and art that was not pillaged by townsfolk were actively destroyed. And here I remember standing in a small town in the South of England in a structure so skeletal that it could be considered as sculpture. Cromwell cleared this monastery for himself and even lived in it for a while. It was thick grey stone with only notions of doors and windows, the top half chopped off and the rest deteriorating into itself. When he left, he systematically demolished the structure, making sure that no one would live, or even see, the place ever again.

In my professor’s office, I asked him about Mantel’s portrayal. But I tripped, gave into the fear that indulgent fiction had conned me and I phrased it like this: Is it harmful? That was where my anxiety lay. I fell for a man who seemed to be based on something wrong. But much of my frustration came from the fact that I did not know how to unravel the Cromwell in my head; My Cromwell, Thomas. I could not bring myself to accept that Mantel had picked the wrong side, or even worse, that she had lied to me. I had suffered a blow to what I had prided myself on and had gotten me to this classroom in the first place: that I had known the facts. For years it was Cromwell’s reality that enchanted me and here I was, my idol revealed to be a fairy-tale tyrant.

My attention turned from who the real Cromwell really was, a question that it turned out I cared nothing about, to why I did not care. I went back to reread, but my library books had been returned. I only had the audiobook. And here I heard again the charm of the old posh white man speaking in my ear, reciting to me the story of this complex character who is at once knowledgable, caring, powerful, and truly just better than all the others. I wondered if it was the book I had fallen in love with or the intoxicating tone resounding through my earbuds.

There’s this thing about white posh British middle-aged male intellectuals, and the thing is that it’s pretty easy to love them. They have a tinge of little boy who still wets his pants, and thus they allow for our ability to mother them. And then there’s a healthy dose of manliness that attracts unwilling desire. I watched my father, using his accent, getting away with things that my American mother would not because of some goofy aging Britishness that the rest of the world liked too. It is what makes them the easy oppressor, but  what also makes it so seductive to forgive them. Did I let another destructive man off the hook because I was charmed by the voice of another?

But was it not the woman’s rendering, the fluid artistry of her personal descriptions and scenes she constructed, that created my Cromwell? Her ideas and her prose that gave birth to a persona which shaped my own. What she saw between the lines of the institutional male historians had put beauty into something hateful. In the end, I could not accept a more accurate depiction of this character while Mantel’s words were so much more compelling at every turn.

Perhaps Mantel had given into Cromwell’s charms just like I had. We were willing to ignore what was wrong and attach ourselves to something golden. By loving my Cromwell I got warmth and fun and comfort and pleasure.  But I was with Martel too—both of us women, searching in an Early Modern dreamland and finding a man alluring, cunning, and strange.

ISABELLE REA B’20 has a Machiavellian technique.