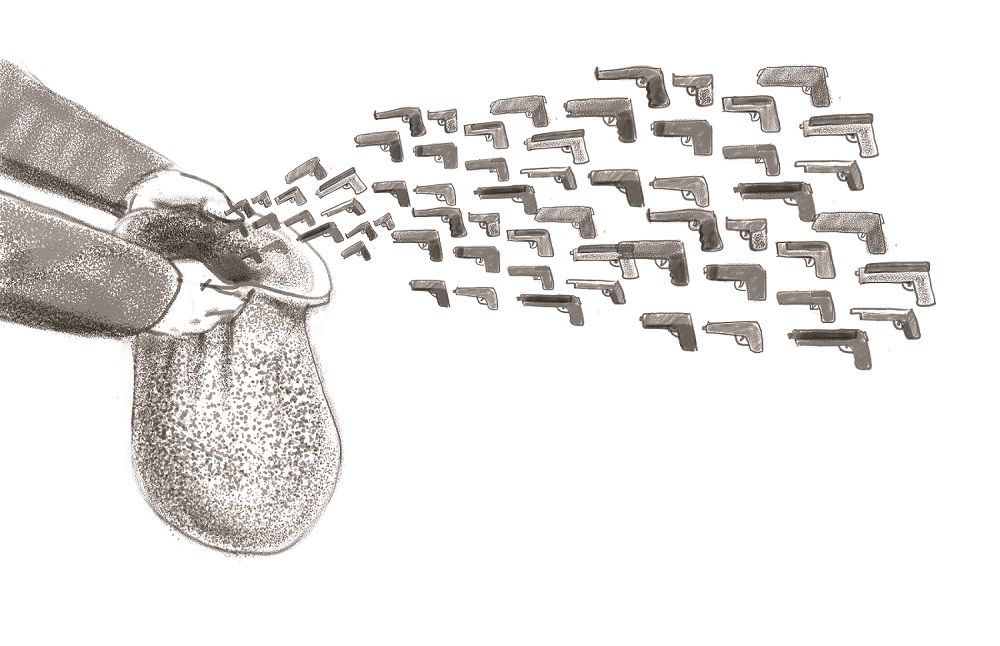 In 2013, a Providence woman, fearing for her life, applied for a final protective order against her partner, following his conviction of domestic abuse.

“He owns a gun,” she wrote in a letter to the judge, “and I’m afraid he will show up at my new house and kill me and the children… one time he took the gun to his head and threatened to kill himself.”

While the woman received a protective order against her partner, the judge did not order the man to turn in his guns—even though since 1996 federal law has prohibited those convicted of domestic abuse from purchasing or owning firearms.

According to an analysis by the gun violence awareness organization Everytown for Gun Safety, 28 percent of Rhode Island women killed by their intimate partners were shot to death. When someone calls the police to report a case of domestic abuse, the victim receives a temporary restraining order against the alleged perpetrator until the case can move through trial; afterwards, the victim can receive a “final protective order” that can last for years. Yet Everytown also stated that out of 1,600 final protective orders over a four year span, in only five percent of these cases were convicted abusers required by the court to turn in their guns.

Tanzi, along with Senator Harold Metts, successfully passed a transformative new gun control law—Bill H5510—on October 30.  The legislation requires anyone in Rhode Island convicted of domestic abuse charges, including a misdemeanor, to turn over their firearms within 24 hours of the conviction, and for the duration of final protective orders put in place against them. Seventeen other states have enacted similar legislation, and, according to Everytown, 27 states across the nation have laws that restrict access to guns for people convicted of domestic abuse or under protective orders.

As the November 5 mass shooting in Sutherland, Texas grimly illustrated, a significant amount of gun violence is linked to domestic abuse—the correlation between them is over 50 percent. The Sutherland shooter, Devin P. Kelley, was allegedly motivated by a desire to murder his mother-in-law when he opened fire on her church. As the New York Times reported, the shooter had also been charged with breaking the skull of his infant son in 2012, meaning that federal law should have prohibited him from owning a gun in the first place.

Omar Mateen, the shooter behind the Pulse night club massacre in Orlando that killed 49 people, also had a long history of domestic abuse against his wife—an instance of aggression that was never reported. The San Bernardino shooter, the Boston Marathon bomber, and the man who killed three people at a Planned Parenthood in Colorado Springs last year all physically abused their partners.

In a less widely-covered shooting in Plano, Texas from September of this year, eight people died after an angered husband shot his wife and her friends at a party she was hosting. The shooter’s ex-wife had also been a victim of physical abuse, her mother later explained, but she had not reported the abuse to the police.

Restrictive gun laws can only work if victims come forward and report instances of abuse, but at least half of victims of domestic violence do not actually report their abuse, according to the Department of Justice. Shelters like the Eastman and Sojourner houses in Rhode Island are one important way to provide the transitional housing, emergency support, and helplines that can aid victims in taking action.

Domestic abuse is most often not a one-time event, but something that can recur over a period of several years. At least a third of people who are convicted of domestic abuse will be charged again within a year of their release from jail, according to the Center for Court Innovation. Allowing abusers to retain guns elevates the chance of a fatality, for as Everytown emphasizes, the presence of guns in domestic violence situations increases—by five times—the risk that a woman will be killed.

Another study by the Annals of Internal Medicine found that 50 percent of people murdered by their partners are killed with guns. And the Journal of Public Health revealed that, in California, at least two thirds of women in houses with guns had been threatened by their partners with a firearm.

The NRA remained the bill’s most vociferous opponent, fearing the abuse in the seizure of guns from their owner. “The stakes could not be higher for the Rhode Island firearms community,” the NRA wrote in the weeks leading up to the passage of the bill. “Anti-gun groups have co-opted domestic violence organizations simply to notch a victory that they can use as momentum for their larger gun ban agenda.”

Still, the NRA remained a clear minority as polls conducted by Everytown in the past few years have all revealed that well over 60 percent of Rhode Islanders are in favor of further restrictions on gun ownership.

The new bill has a broad reach—those with misdemeanors for domestic abuse crimes from cyber-stalking to disorderly conduct are within its scope—but it only reaches back to convictions from after July 1. Additionally, the Sutherland incident indicates that simply having laws to prohibit ownership are not always effective in preventing potential shooters from gaining access to weapons, as the data used for background checks is not always updated. (Rhode Island is one of 19 states that requires universal background checks for all gun sales, even in unlicensed sales.)

Still, a recent study from Boston University’s School of Public Health strongly indicates that laws that remove or restrict guns from domestic abusers do, in fact, save lives. States that had these laws in place suffered lower rates of “intimate partner homicide.”

As Governor Gina Raimondo explained when signing the bill into law last week, people like to offer prayers following gun violence, but more is needed. Bill 5510 offers a step towards the prevention of future tragedies.

JACK BROOK B’19 believes we need more than prayers to prevent mass shootings.