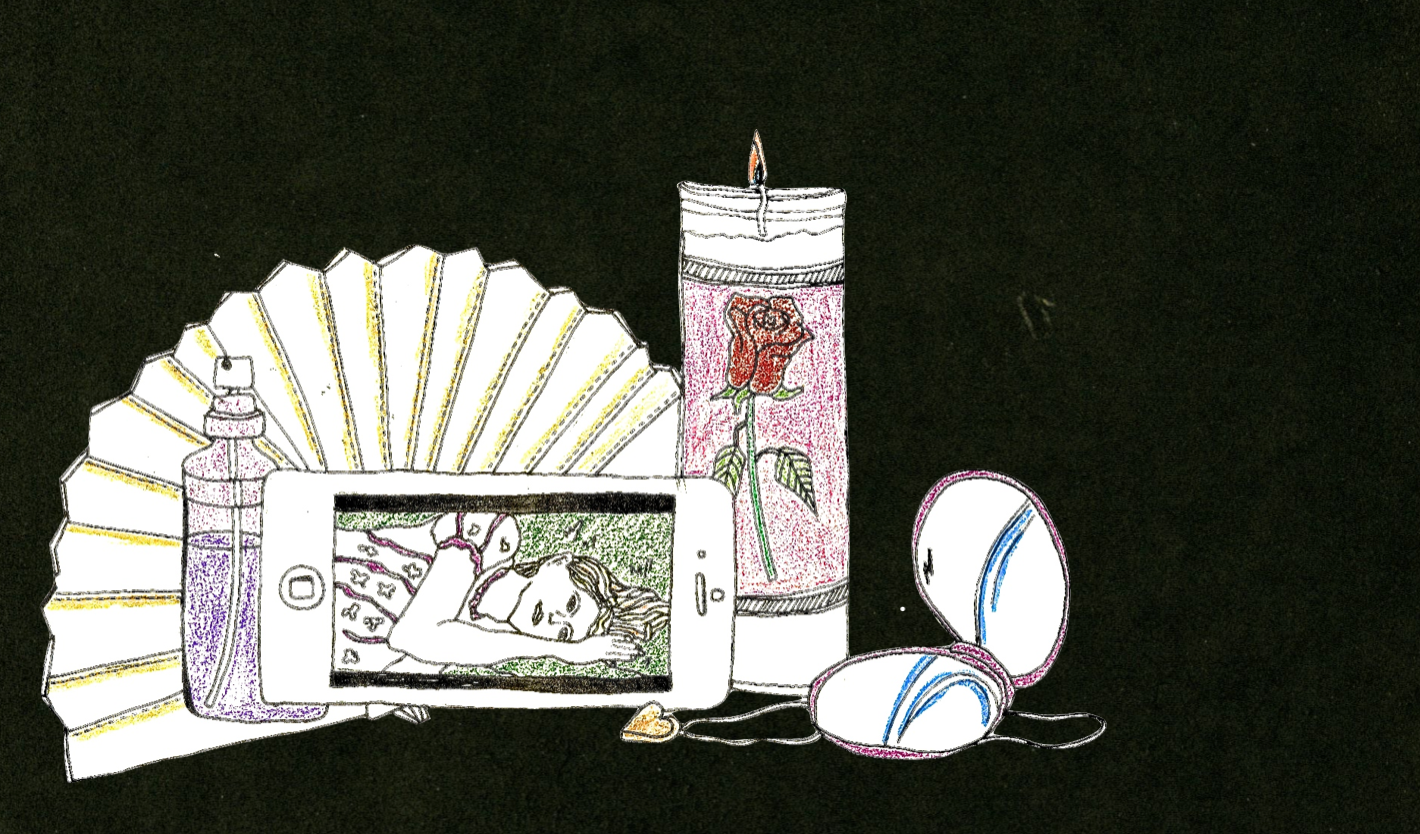 I saw this for class. We were supposed to think about the male gaze and how Jimmy Stewart’s binoculars are a symbolic phallus. The professor said: “You have to see it big to understand the director’s vision—let the images overwhelm you!” My dad likes to do that, too. He bought a projector once for Christmas, and family movies now take place on a white sheet draped over our bookshelf. In an act I’ve always interpreted as a demonstration of his commitment to cinema and an implicit reproach to me, he always pulls up a chair to be as close to the screen and speakers as possible. So I went to the screening with my friend, who is a boy, who likes movies, who of course I sort of had a crush on.

Professor Phil Rosen, my dad, this crush: very symbolic triumvirate, Knowers of Cinema, that put me in the art building lecture hall at 8:00 on Tuesday, March 6. The symbol here being something like: my compulsive desire to appeal to men? Grace Kelly spins around the room, turns on the lights one by one, and says her name at Jimmy Stewart, who mocks her for never wearing the same dress twice. “Only because it’s expected of [me],” she murmurs. I don’t remember what I was wearing, but I assure you that I was performing for the male gaze at the time. Sadly, the male gaze was not on me. The snowy planes of Grace Kelly’s face were expansive and flawless on the big screen, exactly the way Hitchcock intended for us to see them.

I rented this movie in Standard Definition on Amazon using a gift card I had gotten from a University survey I took about the drinking habits of my friends. One of these friends is named Isabelle. We were lying in her bed. The feasters drank wine, and we shared a warm coconut LaCroix. The sound was quiet and the computer overheating on my lap so we had to use earbuds and lean in to hear. Isabelle fell asleep next to me and I could feel her breathing into my shoulder. I kept forgetting to pay attention so I used the “x-ray” feature, which gave me a dropdown menu with the names of the characters and sometimes “trivia.” I did not turn off the app that changes my computer display’s color at night, and with time the screen’s sunset tinged the actors a sickly gold, and my laptop glowed like a cozy hearth. Thanks to the warm fire and lack of “blue light,” I fell asleep, too.

There is a voyeuristic quality to smallness, to holding a screen in the palm of your hand – like peering into an 18th century locket in which the portrait, intricate and detailed, of a loved one is painted. The miniature is special and secret, because it belongs to a different world, one of tiny, fairy-like proportions. This is the appeal of bonsai, teacup pigs, and those little erasers in the shape of animals and sushi. Detail becomes all the more absorbing because of its delicacy, and the experience more private because you, and only you, are able to see it.

Rather than simply an interplay of colored light and sound and shadow on a wall, video becomes material when introduced into a diversity of settings. It takes on new forms (the mirror on my shelf, a miniature portrait) and new functions (a warm fire, background noise) it didn’t have before, and in turn is formed by the setting in which you see it. It enters into a dialogue with the textures and people and routines of your daily life. This is why small screens can be so intimate, and online streaming services are successful enterprises.

I watched this movie on a big airplane on a small screen framed by the fuzzy, printed China Airlines seat coverings. It was all very appropriate: the sequences of images were so tight, so packed with action and narrative (a closeup of a character’s eyes means it’s a memory, a shot of a beautiful woman means it’s his wife, the single teardrop means she’s dead), that my vision and brain felt cramped and nauseous like the rest of my body—this movie did not need IMAX 3D to make an overwhelming experience. There were a lot of characters, each with a two minute backstory, and they were shuffled in and out of the film like cards in a playing deck, so it didn’t matter much when the captain interrupted to say that the pretzels were coming.

The destruction scenes, on the other hand, were expansive and extensive but not quite soothing. When they blew up buildings I re-read the safety manual. Sometimes I switched to the flight trajectory visualization and watched the tiny white airplane crawl across its blue field and leave its green trace for a long time. The screens had a feature through which you could “chat” with other passengers. I chose seat 32B. There were several scripted options for conversation starters, so I selected “Have you bought anything from the in-flight Duty Free yet?” and, as a follow-up, “I am having one of those sleepless nights.” I waited the rest of the movie for a response. Mostly I watched the other scenes of the movie over my neighbor’s shoulder and the person in front of me’s shoulder and the other person in front of me’s shoulder. My main experience of this movie was thus: almost exclusively the scenes where Margot Robbie is almost naked and each of these scenes repeated like six times. This is a good thing about small screens—you can pick and choose the story yourself, and often the product is greater than the sum of its parts (the parts being, in this case, Margot Robbie juxtaposed with everything on this airplane).

While watching this, I liked to wear pink bathrobes and light candles to match the story. This self-staging is less to feel like I am in the movie (I always feel like I am in a movie, but maybe that’s the male gaze talking), and more to feel like the movie is all around. Making things with and out of movies, self-aestheticizing and enmeshing the screen stuff with real stuff, can be done most extravagantly in private; in my experience, audiences at the local CinemarkTM are not likely to play along (it is understandable; they have their own fantasies).

And so I watched this exclusively in my room, over the course of a couple days, keeping it minimized in a little rectangle in the lower right corner of my laptop in the interim periods. It lived there with my homework and to-do lists and texts and porn and thinkpieces I never read. One of my favorite things about Macs is that a .mov thumbnail can play from beginning to end in miniature, literally embedded in your desktop beside folders and screenshots and drag-and-drop detritus. I couldn’t do this with The Virgin Suicides, because I watched it on Putlocker, but same idea, just augmented by “Why Slavic Girls Make the Best Girlfriends” ads. It became like a ballerina music box that plays when you open it: a pretty, usually-ignored thing in my space, secret and mine.

Theaters are always see-and-go; the lights come up and everything is gone and you blink and shake yourself up awkwardly at having found yourself experiencing emotions in the dark with strangers. By the time you’ve reached your car, the world is only parking lot and shrubs-in-mulch again. But the Lisbon girls and their pink beds lived with me: in my room, and especially in my laptop, that personal multi-purpose object, purposes being everything from writing papers to looking at my reflection in the smudged and darkened screen. I kept the Putlocker tab open for a while after finishing the movie so I could go back and watch parts of it periodically. Even after I lost it to a Chrome crash one night, Sofia Coppola’s careful world, with trinkets and floral and perfume, overflowed its boundaries; it resonated in the little mirror on my shelf and the pink candle on my windowsill.

Olivia Kan-Sperling B’20 is the still point of the turning world.