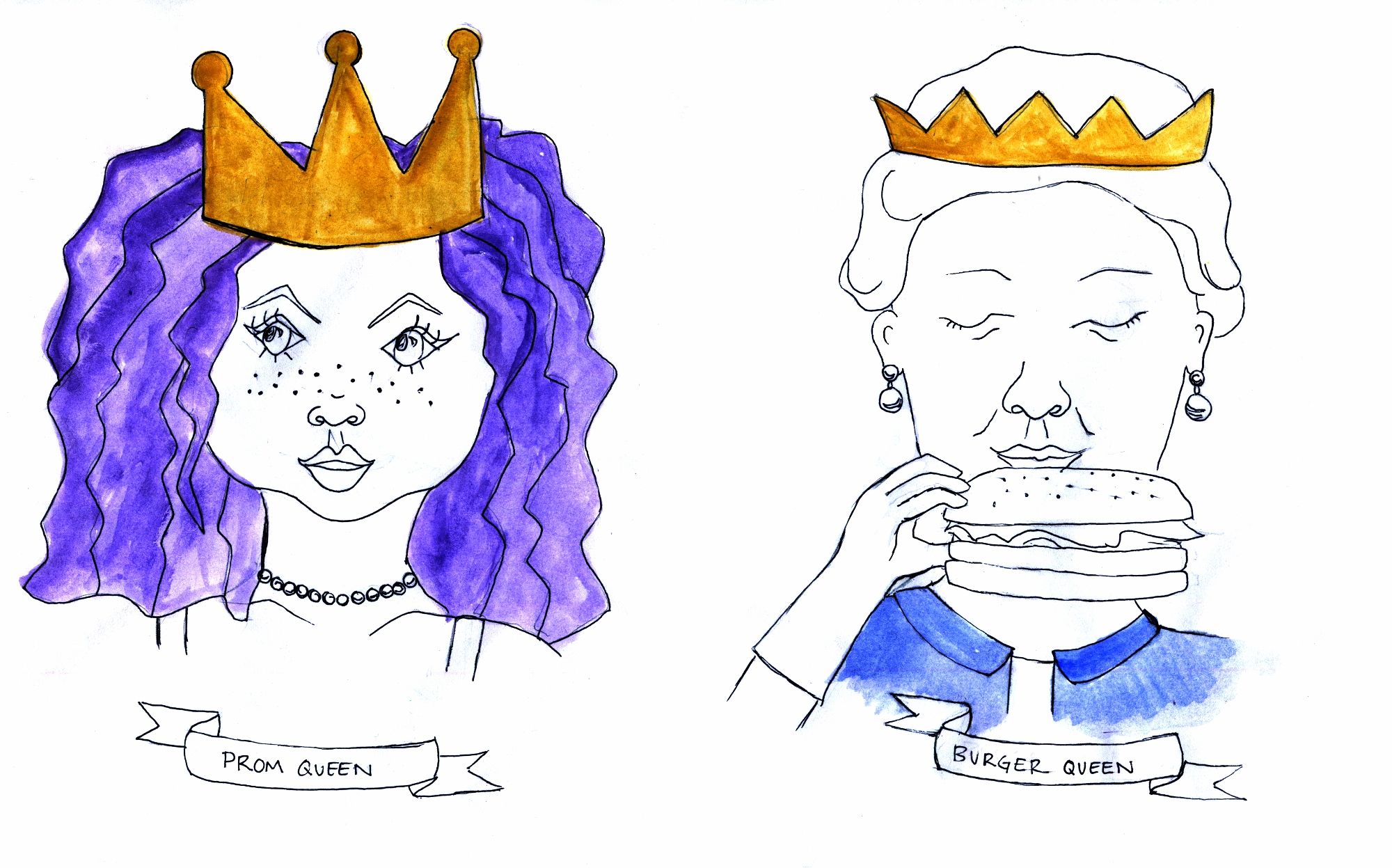 This week’s saddening use of zeugma ([zoog-ma] noun: a figure of speech in which a word applies to two others in different senses) came in the form of a  Daily News’s internet headline: “Texas school district photoshops homecoming queen’s hair color, apologizes.” The anything-but-ebony-haired reigning queen, Ebony Smith, wore her hair long, shiny, and purple to North Shore Senior High School’s homecoming in Galena Park, Texas. In the school’s important press release of their homecoming event, Smith’s hair was filtered to appear brown, with a residual, accidental purple halo of fly-aways that the intro to Photoshop video on YouTube hadn’t covered. “It wasn’t even Photoshopped correctly,” said Smith, a true millennial, to KHOU-TV. “You can still see purple outlining. It’s just very embarrassing.” The principal of North Shore High, however, would perhaps argue that he really did just fine for a first stab at using Adobe’s photo editing software.
If that wasn’t embarrassing enough, the school then insisted that Smith dye her hair brown after homecoming (perhaps the principal’s small attempt to get back at the so totally unfair Photoshop critique), referencing the ultimate law of the land, moral code of all moral codes: their student handbook. In addition to the usual—attendance policies, mission statements, dress codes—the Galena Park Independent School District handbook contains a list of banned hairstyles in its own section, right on page one, titled “Unacceptable Hair and Grooming.” Statute number one: facial hair is banned, and “students are to avoid inappropriate hair color,” which includes, explicitly, orange, green, and purple. Disciplinary action, however, is left in the hands of school district officials.

Smith said she would dye her hair brown after the incident was publicized. Her mother, on the other hand, is outraged. She told Daily News, “Keep her as who she is. That’s who the students voted in.” At the point where one’s biggest critic, their mom, is defending purple hair, shouldn’t the high school let it slide? Not at North Shore.

The Galena Park Independent School District’s motto? “Leading, Learning, Serving… with Passion.” But what isn’t at the forefront of the school district’s officials’ minds is the fact that Smith’s bright shade is called “Purple Passion.” Perhaps Smith’s purple hair was her own passionate form of self-expression, but not quite what North Shore had in mind when using the word. It might be worth noting that each of the students featured on the cover of the handbook has brown hair. The Indy suggests North Shore add a clause to their chapter on academic honesty: while plagiarism is not tolerated, rash originality is strongly discouraged. And while they’re at it, spicing up packed lunch is great in theory, but to ensure cohesion at their drab institution all students should eat un-toasted jelly sandwiches and celery sticks every day for the sake of consistency. The Indy also suggests a mandatory course in social media usage for administrators.

The school corrected their mistake too late, swapping the Photoshopped photo to a black and white version, where the purple, and everything else, was all rendered in grey. In writing, the school district does “regret this mistake. “In the photo, Smith is stripped of her purple hair, but we all know it’s there. Her crown, however, is a standard homecoming queen tiara. Perhaps not everything is bigger in Texas, just more purple.

Lobster frittata. Truffle risotto topped with gold leaf. Crumpets with jam and butter. Eighteen types of caviar eaten off of a tiny diamond encrusted spoon. Cronuts topped with rosé champagne caviar. Hermès handkerchiefs perfectly folded and pressed, thrown away after each use. This is how a Queen dines.

But it turns out the Queen doesn’t mind stopping in for an annual McFlurry. The Queen of England owns a McDonald’s located in Oxfordshire, just outside of London. With a net worth of $500 million, Queen Elizabeth’s portfolio is varied—a fleet of swans, a royal ship with gold door handles and a private hospital, Rembrandts, Michelangelos, and Da Vincis, and a Range Rover with a custom-made corgi statue on the bonnet, to name a few. In 2008 the Queen added to this collection, purchasing the Banbury Gateway Shopping Park. The park opened in 2015, and it is home to a Costa Coffee, Starbucks, Marks & Spencer, a Primark, and McDonald’s. The McDonald’s isn’t just any old golden arches. It’s a British McDonald’s featuring delicacies like porridge, bacon rolls, and cheese and herb melts.

But not even the Queen of England’s McDonald’s is immune from stinging Twitter reviews. A review of tweets about the Banbury Mickey D’s (or, as they say in the UK, “Maccy D’s”) reveals many complaints, though the Indy isn’t sure what level of quality customers expect when they’re paying £3 for a Big Mac. Earlier this week, Twitter user @carolegreen tweeted that she was eating her meal at the Banbury McDonald’s “when a very rude and miserable cleaner decided to mop the floor including [her] feet.” The Queen responded to Carole’s tweet, “you won’t @ me tho.”

Twitter user @khalidf355 was outraged about the portion size considered “large fries.”  While the Queen owns the McDonald’s, she is known to avoid the establishment, and perhaps this was Her Highness’s way of sending a message. In January of 2016, one Twitter user photographed a squirrel with its head stuck inside of a milkshake cup outside of the franchise. Other strange things are afoot at the Banbury McDonald’s: in August, @PoppyDouglass documented a man riding a horse and buggy through the drive-through, with a small dog in a basket in the passenger seat, as he picked up a tea. The archaic anglicism might go to prove: the sun never sets on the golden arches.

Since August 3, 2001—for those uninitiated: the release date of The Princess Diaries—the coolest way to spontaneously become a princess has been to find out that your grandma Julie Andrews is actually the queen of an obscure-yet-prosperous European country called Genovia, famous for its pear cultivation, and you are now heir to the throne. Sure, suddenly being bequeathed royal responsibility during the tender years of high school had its highs and lows for Mia Thermopolis, but she ended up with an empowered self-image and the storybook kiss she dreamed of.

But Mia Thermopolis’s “Best Spontaneous Princess” title may have just been usurped by Ariana Austin, a non-fictional American woman who met her real-life prince at a nightclub. Austin recently married Joel Makonnen, Prince of Ethiopia, after over 10 years of courting since their first encounter in 2005 at Pearl, a Washington, DC nightclub.

At first, Makkonen didn’t reveal his royal status to his crush. Instead, he went with a cringy pickup line: “I said, ‘You guys look like an ad for Bombay Sapphire,’ or whatever the gin was,” as Makkonen told the New York Times.

Makkonen is fifth in line to the imperial throne of Ethiopia, as the great-grandson of Emperor Haile Selassie. These days, Makkonen may just be a typical, starry-eyed newlywed settling into a traditional life in Washington, but he also has a bulging passport to match his royal origins. Makkonen was born in Rome, went to grade school in Switzerland, boarding school the French Alps, and attended graduate programs in Washington, DC. While Makkonen was finishing a law degree at Howard University, he stayed in touch with Austin, who had just completed a Masters in Arts Education at Harvard.

After several years of dating on-and-off as they each pursued their own education, Makkonen proposed to Austin at her parents’ house. For a moment, Austin thought Makkonen’s vigorous knocking on the door was a burglar trying to enter the house, so she called her parents. “She thought somebody was trying to break in, and it was just the poor guy trying to propose to her,” Austin’s father, Bobby Austin, told the Times.

Austin and Makkonen were married on the morning of September 9 at an Ethiopian Orthodox church in Maryland. “I think we both had this feeling that this was our destiny, but I felt like I had things that I had to do,” Ms. Austin told the Times. The wedding festivities lasted late into the night, culminating with a reception held at Foxchase Manor in Manassas, Virginia, with over 300 guests in attendance. The Indy’s sources have yet to reach Mia Thermopolis for her thoughts on the latest tale of royal happenstance to capture public attention.