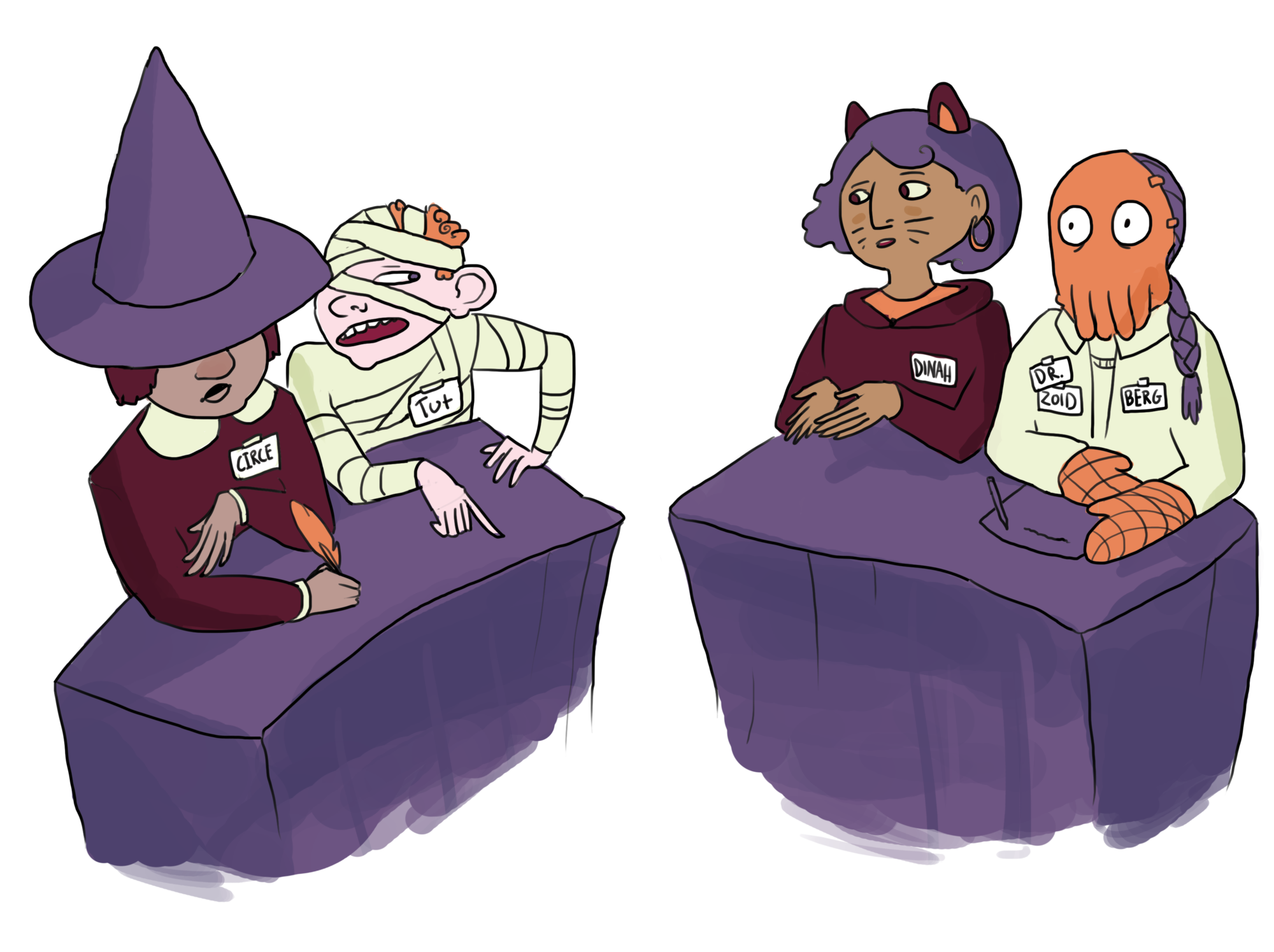 Inside an auditorium in Brown University on Saturday afternoon, October 21st, the Joker, Darth Vader, and Rosie the Riveter listen to a critique of capitalism and food inequity in the American school system.

It’s the final round of the first official tournament of the year for the Rhode Island Urban Debate League (RIUDL)—Halloween-themed—and 41 costumed students from seven schools across the state have assembled to debate whether the US government should invest more money in its education system.

“Healthier adolescents will be able to focus more on school and can get better grades which will help them leave poverty,” says Lalli Rosa, a junior from E-Cubed High School in Providence. Rosa and her partner are attempting to defend the affirmative position on the grounds that the government ought to expand a program designed to provide healthier food to impoverished school districts.

“But,” shoots back Kahlyl Robertson, a senior from Woonsocket, “before you can resolve food inequity you have to focus on the underlying structural issues that cause it.”

“Capitalist class governs in its own interests—it’s not simply because they don’t get good food at school, it’s because they can’t get food in schools,” Robertson explains when his turn presenting the ‘negative’ case comes up. “Unless you dismantle the capitalist nature of schools you can’t address food inequity.”
The final round continues—back-and-forth—for well over an hour, full of cross examinations and counter-arguments. Yet while the stated purpose of the tournament is to provide a space for students like Robertson and Rosa to argue over policy, RIUDL really aims for something deeper and more transformational in its work.

“We see academic debate as a strategy for social justice,” says Ashley Belanger, the executive director of RIUDL who has worked there for over ten years (her official job title is “Executive Revolutionary”). “Debate for the students serves as a vehicle for expanding their own perceptions of themselves in the world.”

Debate has been proven to have a profound effect on students who participate in it, particularly those students in underperforming school districts. According to a study conducted by the Chicago Urban Debate League, students who debate are 42 percent more likely to graduate from high school than those do not. The number jumps up to 70 percent for African-American men, who are also three times less likely to drop out compared to their non-debate peers. All debate participants see vast improvements in their critical reading and writing abilities.

Currently, RIUDL partners with seven different schools—from Woonsocket High School to Central High School in Providence—and hosts six tournaments over the course of the school year. They also host what is known as the “community debate,” in which community members pair up with urban debaters in a series of speed debates. Last year, the issue was whether Providence should become a sanctuary city.

In four of Rhode Island’s major cities —Providence, Pawtucket, Central Falls, and Woonsocket—there exists a striking amount of educational segregation, as 20 percent of students in the public school system are white, compared with nearly 80 percent in the remainder of the state. Each of these school districts has double-digit drop out rates (around 20 percent for Woonsocket and Central Falls), with 80 percent of the student body coming from a low income family. The results of last year’s Partnership for Assessment of Readiness for College and Careers, a statewide test, reveal that less than a quarter of Black and Latinx students scored proficient in English, well under the state average. It’s clear that the Rhode Island public education system is, to a large degree, failing its urban students, especially those of color.

“The zip code you are born into shouldn’t determine your life trajectory—here it does,” Belanger says. “We’re trying to introduce a pedagogy and a series of activities that’s more about shifting the way that teachers see themselves and operate.”

Inevitably, focusing only on students who join debate means that RIUDL only reaches a small percentage of  the total number of students in each school. That’s why RIUDL has been trying to integrate what’s known as “Evidence Based Argument” learning into Rhode Island schools, which applies the principles of debate—organizing evidence to produce a well-supported claim—in classrooms.

“The basic premise of EBA is that the ideas that students have matter,” says Aaron Woodward, the debate coach for Paul Cuffee High School. “This is a program that by nature puts the content of students’ minds in an elevated position in the classroom and listens to them. This is especially for those who might have felt that their school is not a supportive institution for them.”

A typical English lesson based on EBA principles, Woodward explains, might start with introducing a key concept for the day and raising a question related to it. Students are given time to debate their own personal answers with a partner before the concept is introduced more formally. Students are then given a text, divided into groups, and asked to find specific examples that support the central claim of the concept. Finally, the groups present their evidence and attempt to articulate why it is important.

At the moment, RIUDL has been working with two schools—Paul Cuffee and Central High—to integrate the EBA model, and which is expected to soon be the guiding model in every class for Central’s 1,140 students. Rhode Island is not alone in seeking to integrate EBA—the National Speech and Debate Association (NSDA) has also undertaken a major initiative, originating in the Massachusetts school system. Preliminary studies by the NSDA have shown massive improvement in student ability to organize and construct writing skills and essay-based argumentation.

“This is something that has been a hugely positive experience,” Woodward says. “Both kids and teachers see the benefits to this program, which makes them want to come in in the morning.”

A typical RIUDL practice takes around two hours, twice a week, where students play verbal games, review evidence to build their cases, meet with partners, and practice their speaking skills.

With all the work that debate requires, retaining students in the debate program can be an issue—one that RIUDL is actively working to counteract, and part of the reason why so much emphasis is placed on having fun and building communities.

“In athletic teams, there is an ingrained sense of commitment—if you miss a practice or quit that’s an issue,” says Jeremy Bourget, a history teacher and debate coach at Paul Cuffee Charter School. “Sometimes our novice younger debaters haven’t developed that yet.”

A few years ago, Bourget says that Cuffee’s debate program had upwards of 25 students, this year, however, they are struggling to maintain a group of ten students.

Every aspect of RIUDL is intended to facilitate student engagement—especially the tournaments. Over the summer, in the “Revolution Navigators” program, a team of students, in addition to developing recruiting and retention strategies for RIUDL, worked to plan out the themes, food, and events of the year’s six tournaments. The Halloween classic included gourd painting, dance music, and community-building games to introduce each team to one another. And for students, the process of getting to take a leadership role in developing the tournaments can be just as important as the debating itself.

“I used to be a follower, I would just listen to people,” says Diana Izaguirr, 17, a junior at Mount Pleasant who participated in the summer program. “Now, I have such a different view of what’s going, I’m able to articulate problem-solving and how to use my voice and speak with people.”

“I value this work because I know that they were just like me, living in communities just like mine,” says Bunmi Olatjunji, a former RIUDL member who now works for the organization. “I know they have potential just like I did and have the ability to express it just like I did.”

Following the conclusion of the final, a coaching assistant with his face painted as the Joker leaps up to podium.

“Hello everybody!” he shouts. “You ready for awards?” The first to be honored are the novices, each receiving a certificate with their name printed on it.
“You all took a huge risk by going to your first tournament,” Phyllis Wade, RIUDL’s program manager, tells the debaters as they bounded forward.

Other awards, besides the standard ones for Best Speakers and Teams, include the ‘Revolutionary Thinking’ award (for an outside the box argument that referenced the tournament’s breakfast), the ‘Best Costume,’ which goes to a girl with a spectacular dripping red gore face, and lastly, the ‘Weird Gourd Award’ for gourd decoration, presented to a boy named Esteban (“He let the gourd speak to him”).

The winners of the novice section—a pair of girls both named Rachel—appear particularly excited with their awards; they walk back to their seats, trophies in hand, high-fiving with the type of smiles that one might not expect to see after twelve rigorous hours of policy debating.

“When he said ‘Rachel and Rachel’ won I almost cried, it was so dramatic,” she exclaims.

They debrief the day’s rounds, dissecting the blow by blows and difficult moments—pausing to hug or wave goodbye to new friends from different schools who are now heading back home. The younger Rachel says she joined debate to improve her speaking skills, and the older Rachel nods knowingly.

“Her voice does cower a bit on rebuttal,” the older Rachel notes. “But once she gets that down, we’re gonna be untouchable!”